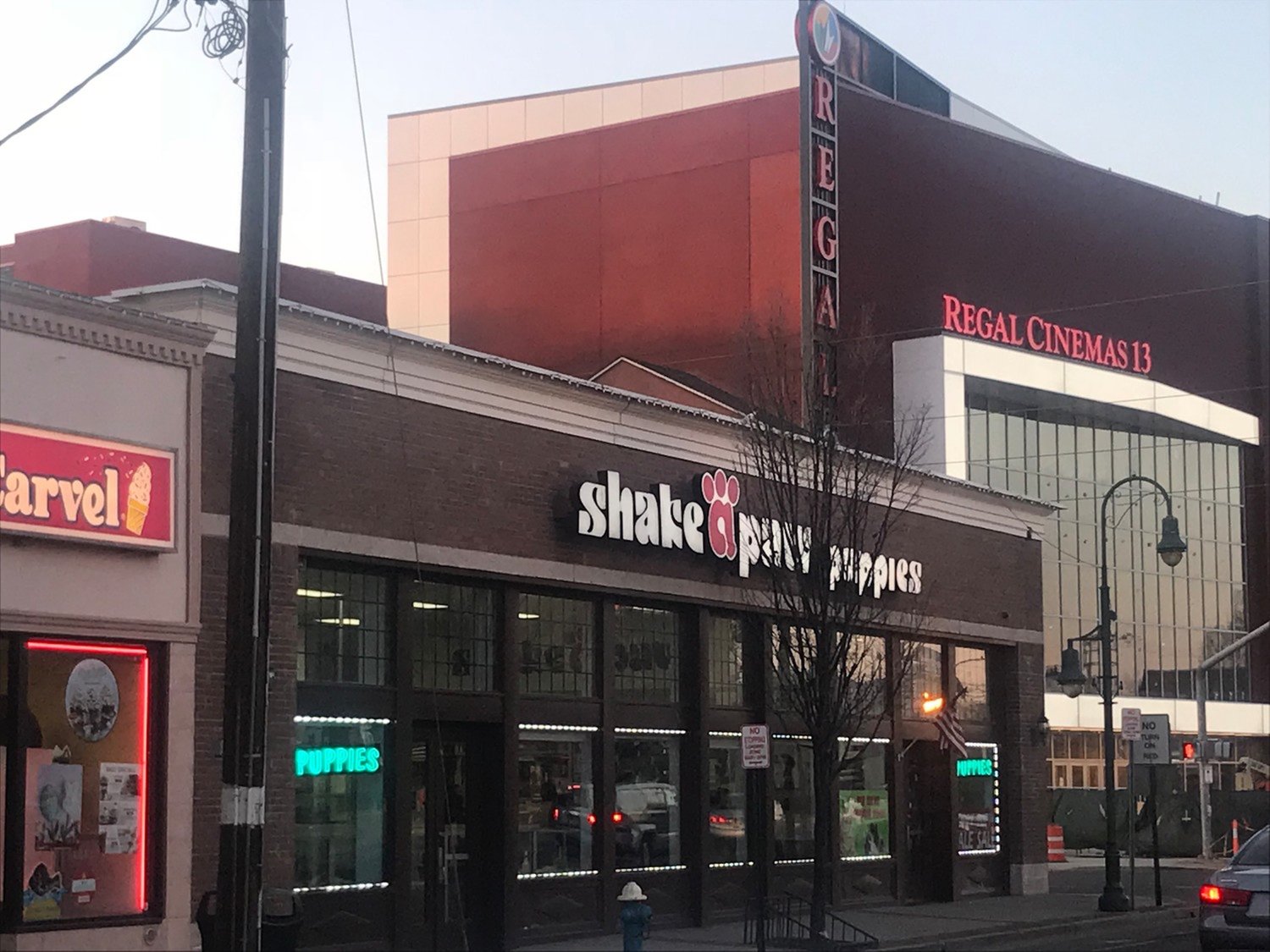 Though a judge overturned a ban on the sale of new puppies imposed on Shake A Paw in Lynbrook, a woman said she was recently sold a sick dog there.
Mike Smollins/Herald
By Mike Smollins

With her husband battling terminal cancer, Linda Bergfelder received a gift from her son Christopher. He tried to cheer her up by buying her a puppy from Shake A Paw in Lynbrook. Her glee turned to grief, however, when the Yorkie, Gizmo, suddenly got sick.

Earlier this month, Nassau Supreme Court Justice Helen Voutsinas ended a three-month ban on the purchase of animals for resale imposed on Shake A Paw stores in Lynbrook and Hicksville. State Attorney General Letitia James had levied the ban in December, accusing the businesses of knowingly selling sick dogs. Before that, they were permitted to sell the dogs they had purchased before the ban.

Bergfelder said her son had  purchased a dog for her three months ago to cheer her up because she was going through a difficult time caring for her husband, Roland, a Vietnam veteran who is suffering from Stage 4 lung cancer.

“He surprised me with the dog wrapped in a blanket,” Bergfelder said of Christopher. “It made me cry.”

Her mood quickly changed when Gizmo began having diarrhea, was discovered to have worms, lost his appetite and didn’t sleep, causing her to stay up at night with him, she said. Bergfelder said she took the dog to a veterinarian who was recommended by Shake A Paw employees, and though her dog was dewormed and given pills, he is still exhibiting symptoms, and she isn’t sure what is ailing him. She added that she planned to take him to her own veterinarian on Tuesday, after the Herald went to press, and that she had spent $1,500 in vet bills already.

“He’s a good dog, very well behaved, but I’m worried about him,” she said. “I don’t care about the money. He’s beautiful and I don’t want him to be sick, and I’m really upset about it.”

Gizmo is 7 months old and weighs 4 pounds. Bergfelder said he was given all of his shots and she tried to change the type of food in the hope of getting him to eat, but has been unsuccessful so far.

Calls to Shake A Paw were not returned at press time, but earlier this month when Voutsina ended the ban on the stores from purchasing new dogs, Vice President Marc Jacobs said the businesses do not sell dogs that are ill.

“Shake A Paw only acquires puppies from licensed and lawful breeders,” he said in a statement, “and has never knowingly sold a sick puppy. As required by law and in accordance with the owner’s wishes, on the rare occasion when a sold puppy has taken ill, Shake A Paw has reimbursed veterinary bills up to the sales price, given a full refund, or exchanged the puppy for another.”

Bergfelder said she was still exploring her options for reimbursement but cared more about the dog’s health.

Dozens of people have accused Shake A Paw stores from selling sick dogs over the past few years, which led to James filing a lawsuit against the businesses and to her initial ban. Though Voutsina lifted the ban, Shake A Paw had to pay a $250,000 bond, agree to purchase animals from breeders licensed by the U.S. Department of Agriculture, provide James’s office with a list of breeders it buys from, and have an independent veterinarian examine each dog.

Voutsina also dismissed a claim that puppies were not handled humanely at Shake A Paw, but she let stand claims that the company operated fraudulently, engaged in deceptive business practices, and falsely advertised its product, which was “likely to mislead a reasonable consumer.”

At a March hearing, attorney Richard Hamburger defended Shake A Paw against 19 consumer complaints that James’s office had gathered over a six-year period, and two veterinarians also testified. One, who was appointed by the court, said he examined 220 puppies and found that only six were unhealthy, while the others were fit for sale, a success rate of 97.2 percent.

“Justice Voutsinas’s decision is vindication for Shake A Paw,” Hamburger said in a statement. “The court recognized that Shake A Paw’s business was being destroyed by the reckless and unjustified demands of the attorney general to block the purchase of puppies for resale.”

James’s suit described the source of Shake a Paw’s animals as puppy mills, although customers were told that the dogs were from legitimate breeders. Many of the puppies had been afflicted with serious health issues, including pneumonia, breathing problems, infections and congenital defects, James claimed. Several had parasites. Some “died soon after purchase,” the suit also claimed, and James alleged that certain issues were kept hidden from customers while health certificates were doctored to advertise healthy dogs.

In October 2020, dozens of people gathered outside of the Lynbrook store for a rally against the businesses’ practices. Chants of “Adopt, don’t shop!” and “There’s no excuse for animal abuse!” echoed outside from protesters who gathered after customers reported buying puppies there that got sick and died