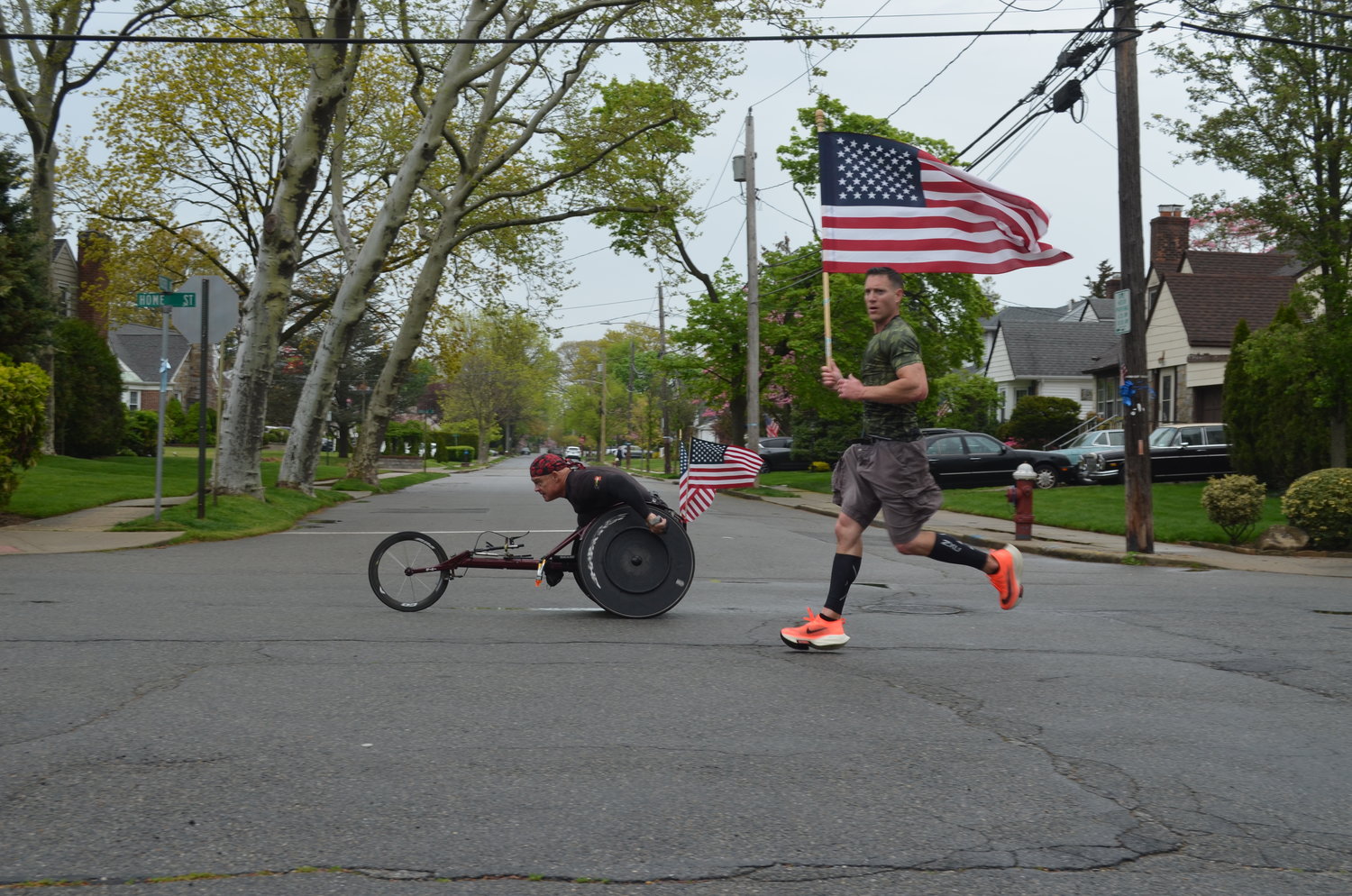 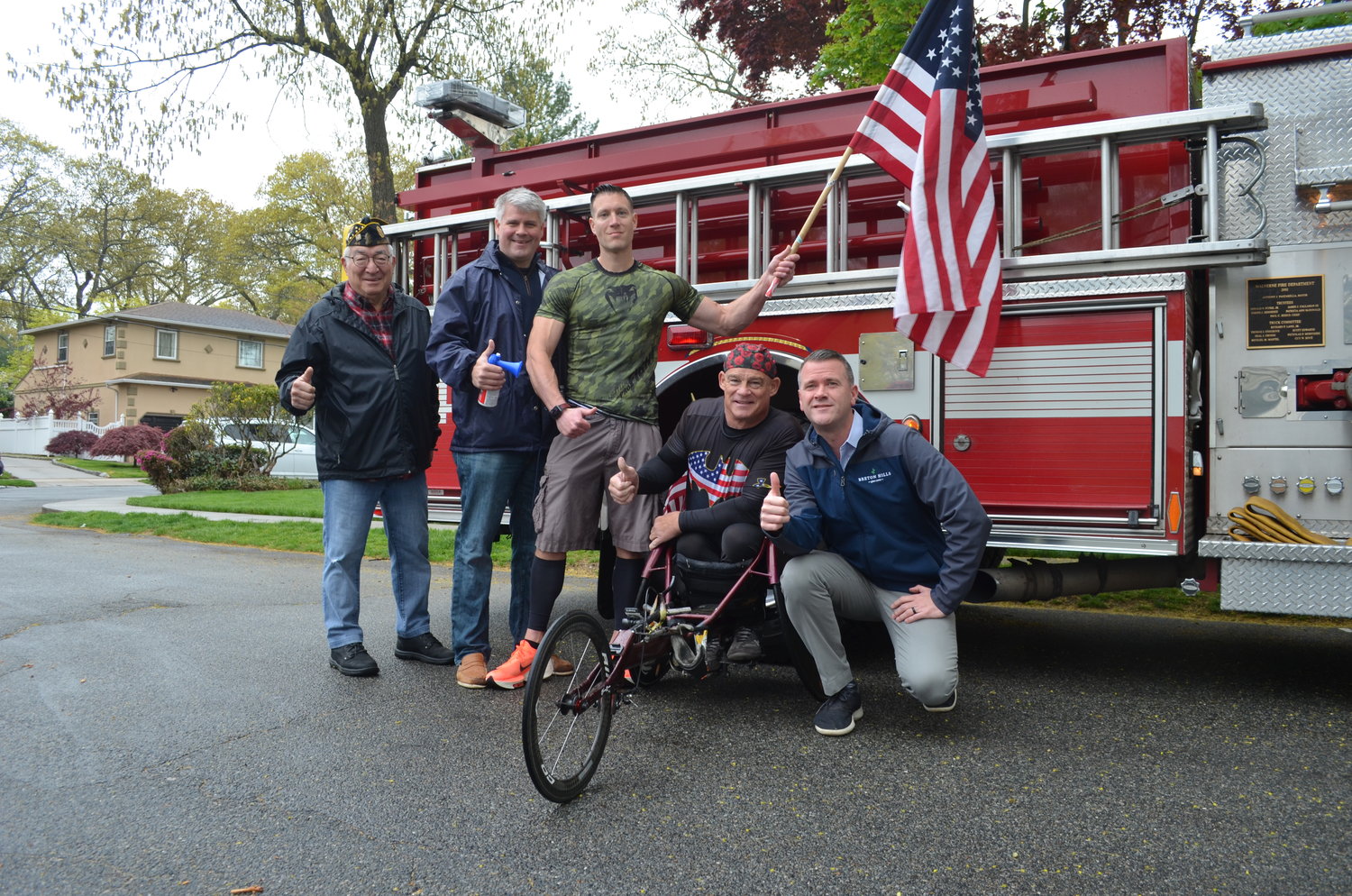 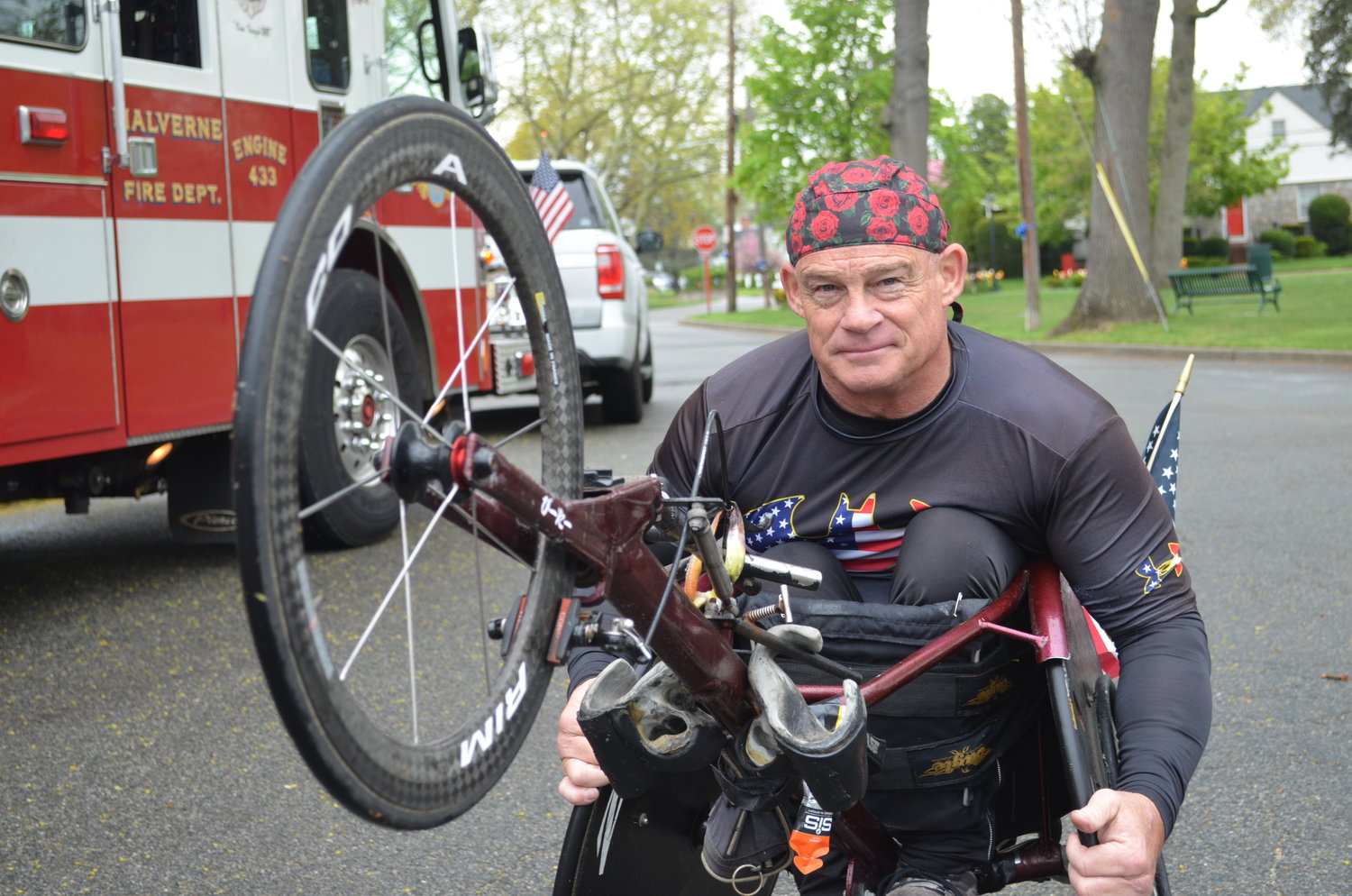 Hawkins, of Malverne, who has competed in events around the world, couldn’t turn down an opportunity to race in his hometown.
Tim Baker/Herald
Previous Next
By Jake Pellegrino

Last Friday, Gregory Waxman, known as  Malverne’s “Patriot Man,” and world-renown wheelchair athlete Peter Hawkins could be seen whizzing down Hempstead Avenue, Franklin Avenue and many side streets before looping around Foster Avenue by Westwood Park, followed by a brigade of fire trucks.

It was all part of the first annual “Operation Hero” — a 50-mile charity race for veterans’ and first responder causes, which saw the pair dash 3.75 miles through the village 13.3 times.

For the past three years, Waxman had participated in the Run Around the Lake, a charity event in Ronkonkoma in honor of Lt. Michael Murphy, a Navy SEAL from Ronkonkoma who died in the line of duty in 2005. However, Waxman felt a responsibility to start a run locally to help his own community.

“The Run Around the Lake is a great cause, but they have over 5,000 people who run in that race and they already get a lot of money,” Waxman said. “So I figured another cause around here could use some help, so I decided to start this to help the American Legion and Sgt. [Thomas] Winters, who passed last year.”

Malverne American Legion Post 44 will use the funds to donate a service dog to a veteran.

“Greg called us about what he had in mind and he’s helping us pay for a service dog,” said Tony Marino, the post’s commander. “It’s a beautiful day and we’re happy to see it, and Greg is making it happen and the American Legion thanks him.”

Sgt. Winters was a 21-year member of the Malverne Police Department who died last year at 55 years old. Before joining the department, he worked with the New York City Police Department’s Housing Bureau for 13 years, serving as a delegate for Police Service Area 9 in Ravenswood, Queens. The funds will be used to start a scholarship in his honor.

Any remaining funds will be donated to the Steven McDonald Foundation in honor of the former U.S. Navy hospital corpsman, third generation NYPD police officer and husband of former Malverne Mayor Patti Ann McDonald. At age 29 with two years on the police force, Officer McDonald was shot three times and paralyzed in the line of duty in Central Park in July 1986.

Waxman became known as the “Patriot Man” last year when he would be seen running around Malverne carrying the American flag to lift spirits during the pandemic. He said he got the idea from the Ronkonkoma run, during which the last quarter mile is traditionally run while holding the flag.

“I used to run by myself, for myself, always chasing a better time for my age group,” Waxman said Friday before his run. “When I started running with the flag, however, I realized I wasn’t running alone anymore.  People would wave, beep and say kind words. I felt a deeper connection with the fabric of the community or whoever happened to be driving down Hempstead or Franklin Avenue that day.”

This inspired him to take his run through the village to a higher level.

“That feeling was the impetus to create this event today because if I could brighten someone’s day during a regular training run, imagine what I could do during a big planned event like this,” Waxman said. “So, we’re going the extra mile today — 50 to be exact.

“We’re doing 50 miles just because it’s not an easy task and what our veterans and first responders do isn’t easy,” Waxman added. “Fifty miles is nothing compared to what they do.”

Hawkins was involved in a car accident when he was a senior in high school and although the former football player never wanted to be a wheelchair athlete, it has turned his life around and taken him all around the world.

“When I was 17 years old, I thought everything was over for me, but then I got into this sport and it’s given me a great outlet,” Hawkins said. “I started wheelchair racing begrudgingly four years after my accident and never thought it would take me around the world like it did. I did the Boston marathon two weeks ago, Long Island marathon 27 times and have done races in New York, Japan, Thailand and Korea. It’s changed my life in a way I could have never expected.”

Naturally, joining Waxman’s cause was a no-brainer.

“I see Greg at all the races and he’s always carrying the flag,” Hawkins said. “We live two blocks from each other and he asked me if I want to be part of it and I said I’d be happy to. We’re just local runners supporting each other for this great cause.”

Malverne Mayor Keith Corbett said that Waxman’s work ethic is representative of the character of the village as a whole.

“For Greg to be willing to put his body through this ordeal all through the village he loves to raise funds for the American Legion is a testament to the people of Malverne, and Greg exemplifies that character very well,” Corbett said.

Next year, Waxman and the village are planning on increasing the stakes with a 100-mile run from Malverne to Montauk.

“That was the original idea,” Corbett said. “We just didn’t have enough time this year to plan that so we decided to do it all Malverne-centric, and I’m going to help any way I can by working with the local police departments I represent out there.”