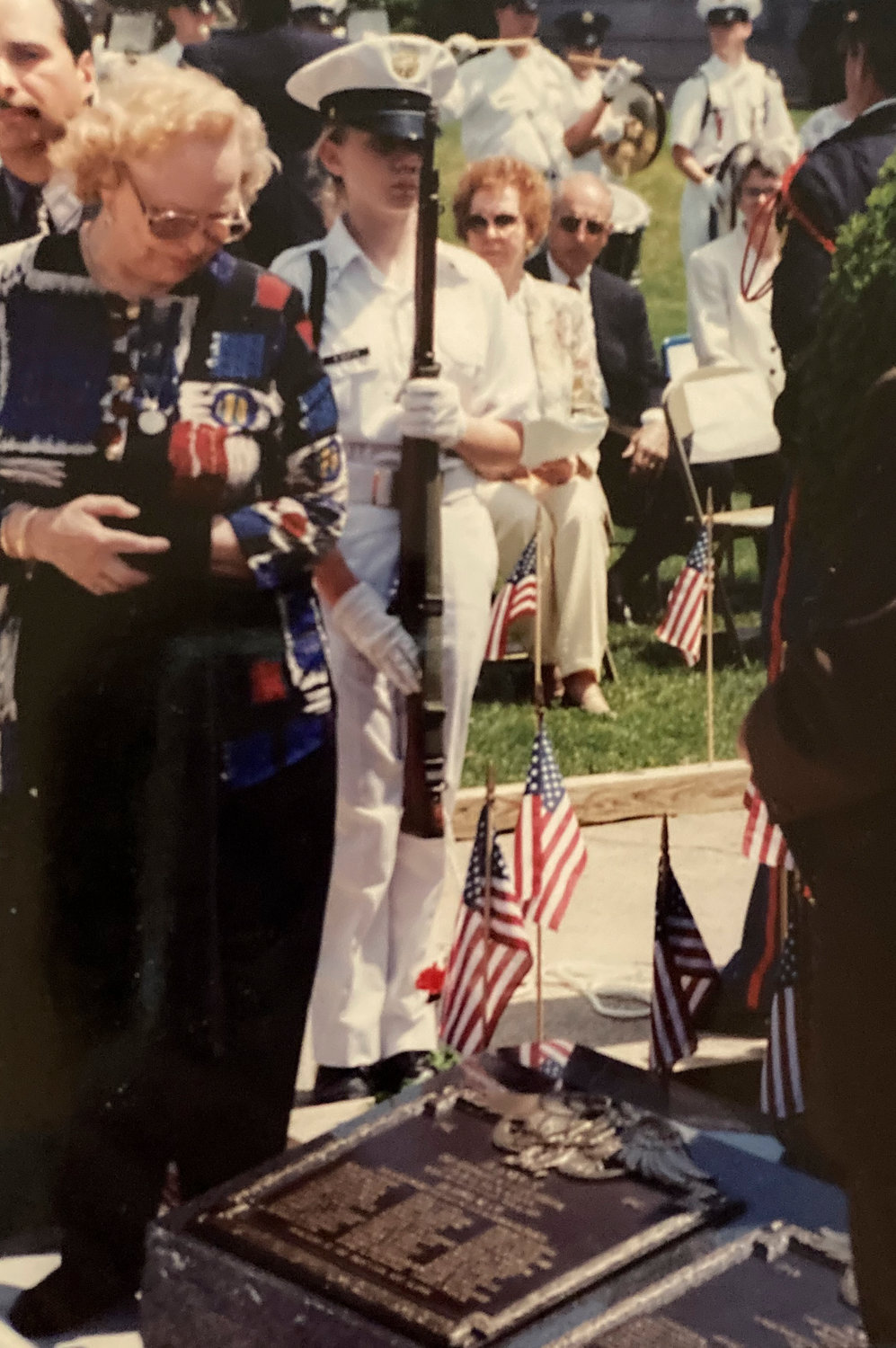 Gold Star mother Jean Reichert at the unveiling of the updated monument in May of 1998.
Courtesy Valerie Esposito 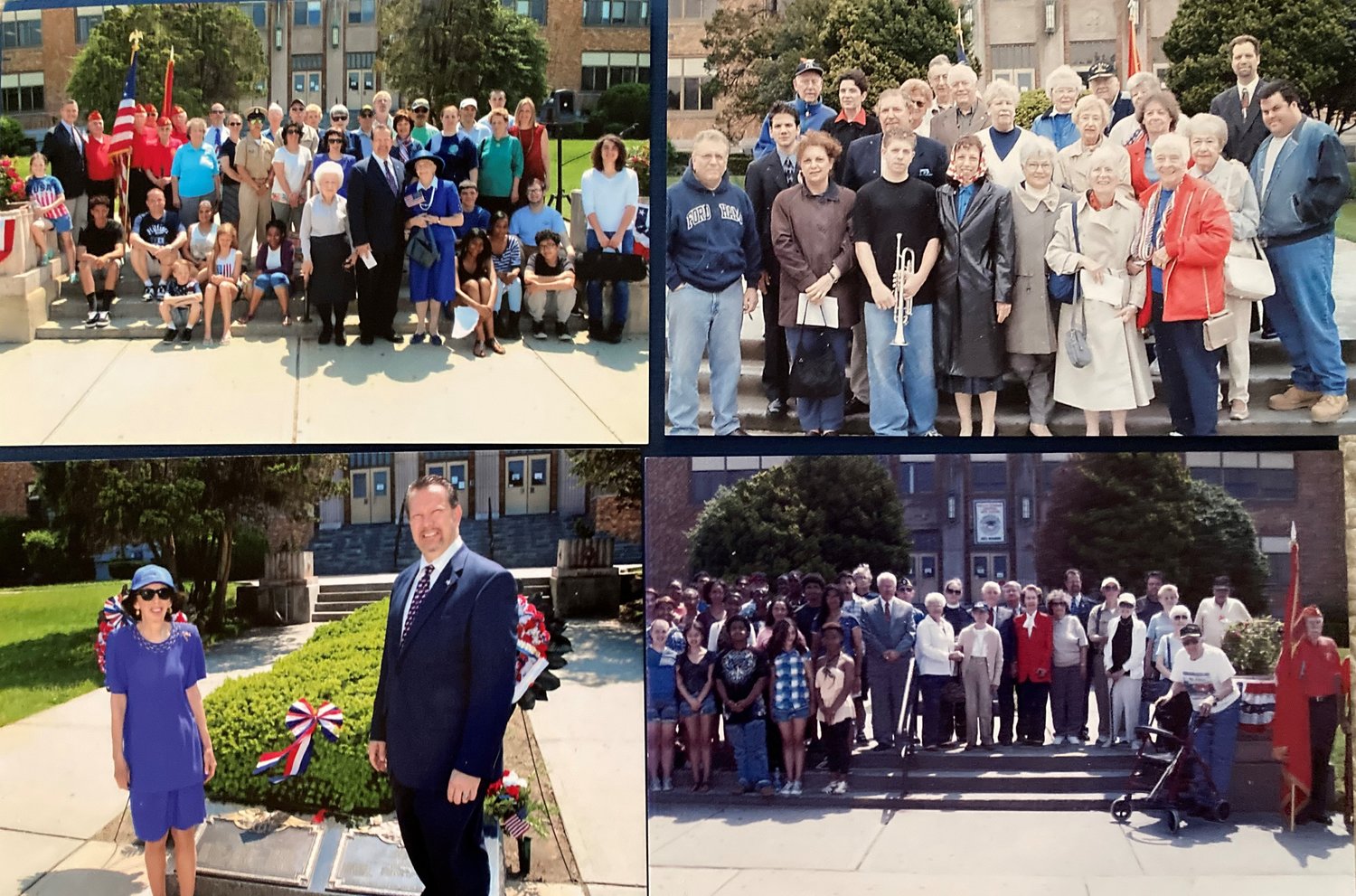 A collage of gatherings over the years at Central High School for the Remembrance Day ceremony.
Courtesy Valerie Esposito
Previous Next
By Karina Kovac and Juan Lasso

As thousands of students across the country left home to enlist in World War II, Valley Stream teens joined the effort. Central High School students who signed up to fight overseas were given a rousing sendoff at the Long Island Rail Road station by the Fire Department band, according to Valerie Esposito, the Valley Stream Historical Society’s director of public relations.

The volunteers were handed a box of cigarettes and a note promising a hand-knitted sweater, but that wasn’t the last of the community’s gestures honoring their valor — particularly those who didn’t come home.

In 1946, Charles Brettell, president of the Valley Stream Dads Club, and fellow members decided to dedicate a memorial plaque at Central High for the fallen alumni, and to inaugurate an annual tradition of rededicating the plaque.

That tradition was kept alive first by the now-defunct Valley Stream Central Alumni Association Scholarship Inc., and later by a handful of historically committed residents. Now, after a two-year interruption due to the coronavirus pandemic, the ceremony honoring Central alumni who lost their lives in the wars of the 20th century will resume on May 28, at 10 a.m.

This will be the first time the high school itself has hosted the rededication event, newly christened the Valley Stream Central High School Remembrance Celebration. Student musicians are slated to play taps and recite the national anthem as part of the tribute.

For years, Esposito helped preserve the tradition, making it her mission to coordinate with community leader and sponsors to host the event each year, to renovate the monument and to document the stories behind the names etched on the memorial plaques. She scoured village archives and plumbed residents’ memories to ensure that the names of alumni soldiers that had been overlooked were included, and their stories preserved. Today, a plaque containing 22 names can be found next to the original plaque and its list of 36, both of which also include casualties of the Korean and Vietnam wars.

Esposito isn’t alone in her dedication to the solemn significance of the monument. Central High teacher Chris Critchley has become the school’s unofficial historian of the local servicemen who died in those three wars. Critchley was always curious about the history behind the names, and unearthed many of their service records — including one for a soldier who shared his last name, Walter G. Critchley.

Maybe the man was an estranged, distant relative, Critchley thought. He eventually discovered that they were not related, but he had uncovered a deeper story. The alumnus was killed in the Battle of Tarawa in November 1943, an especially bloody fight and the first American offensive in the central Pacific region, according to Critchley.

From then on, he was hooked. “Nobody speaks their names,” Critchley said. “These guys graduated 75 years ago, so I share that information in assemblies in school and during classes about, you know, World War II, Korea and the Vietnam War. I infused all those guys into all our class lessons.”

“Valley Stream definitely contributed a lot to the altar of freedom,” he added. “Freedom is not free. Somewhere someone paid for it, and a bunch of them were from Central.”

A scholarship fund was also created in honor of Lt. Jacob Reisert, Central Class of 1939, who posthumously received the Navy Cross “for extraordinary heroism against the enemy in the Nansen Shoto Islands of Japan while serving as pilot of a carrier-based Navy Torpedo Plane and the division leader of carrier air group thirty,” according to the Hall of Valor website.

Reisert was wounded by anti-aircraft fire as he scored two direct hits and flew a critically wounded bomber with open bomb-bay doors and ruptured gas tanks for more than two hours to reach a rescue submarine, giving his life to save his fellow crewmen, according to the Historical Society webpage. Reisert was recommended by his superiors to receive the Medal of Honor but was denied due to a stipulation that only one man who was in battle could receive it.

Students who receive the scholarship are regarded as good citizens, socially conscious, and excel either in mathematics (Reiser was a freshman at Rensselaer Polytechnic when he died) or music (he played clarinet at Central).

While most of the event’s heavy lifting has been taken off Esposito’s shoulders, she will continue to attend the rededication as long as she is able. She confessed that she can’t explain why she’s so passionate about it.

“I just had to keep it going,” she said. “It’s so much a part of my life [and] it’s more than words can explain … it’s just the right thing to do.”

Have an opinion on the memorial rededication? Please send an email to jlasso@liherald.com.