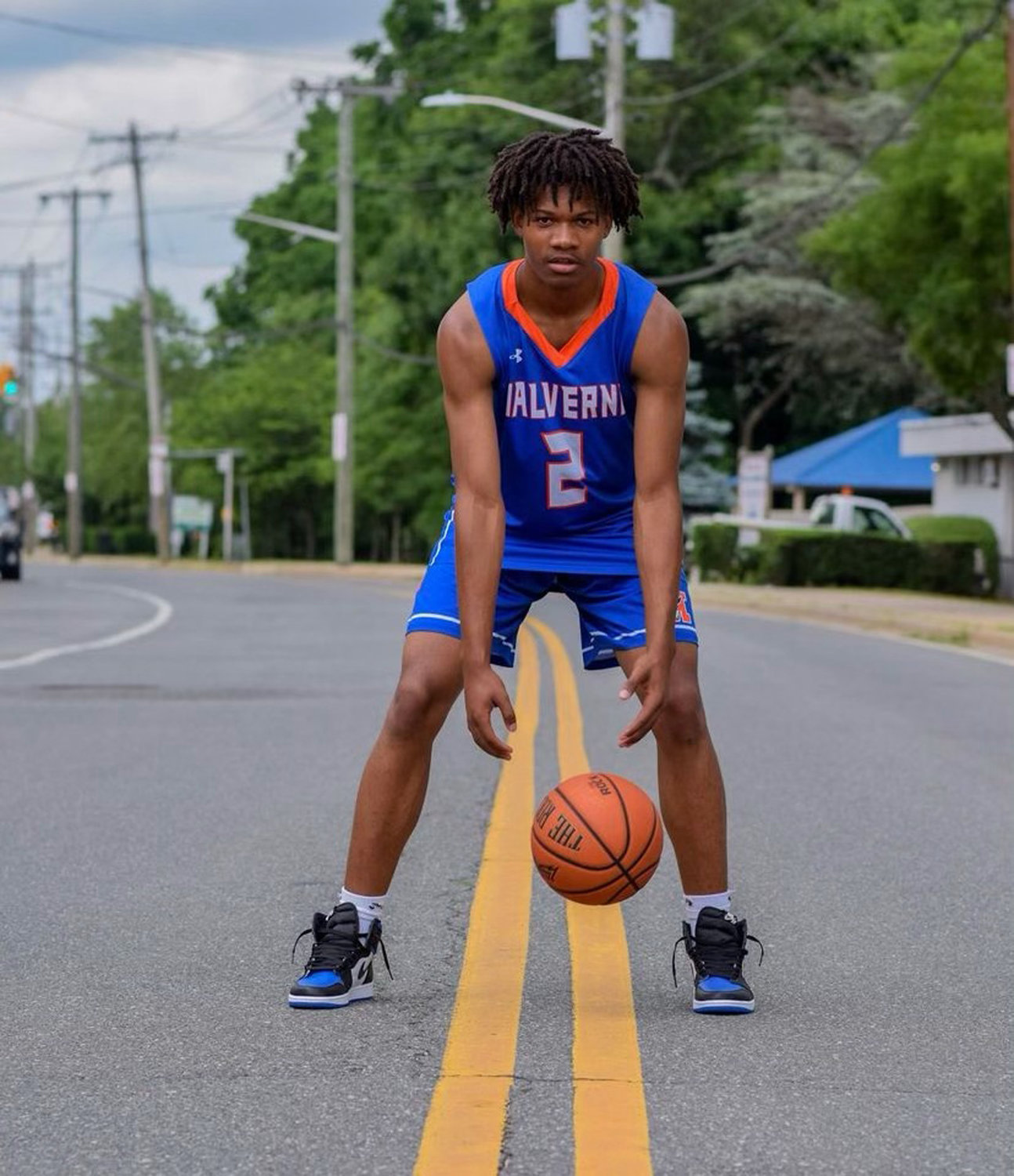 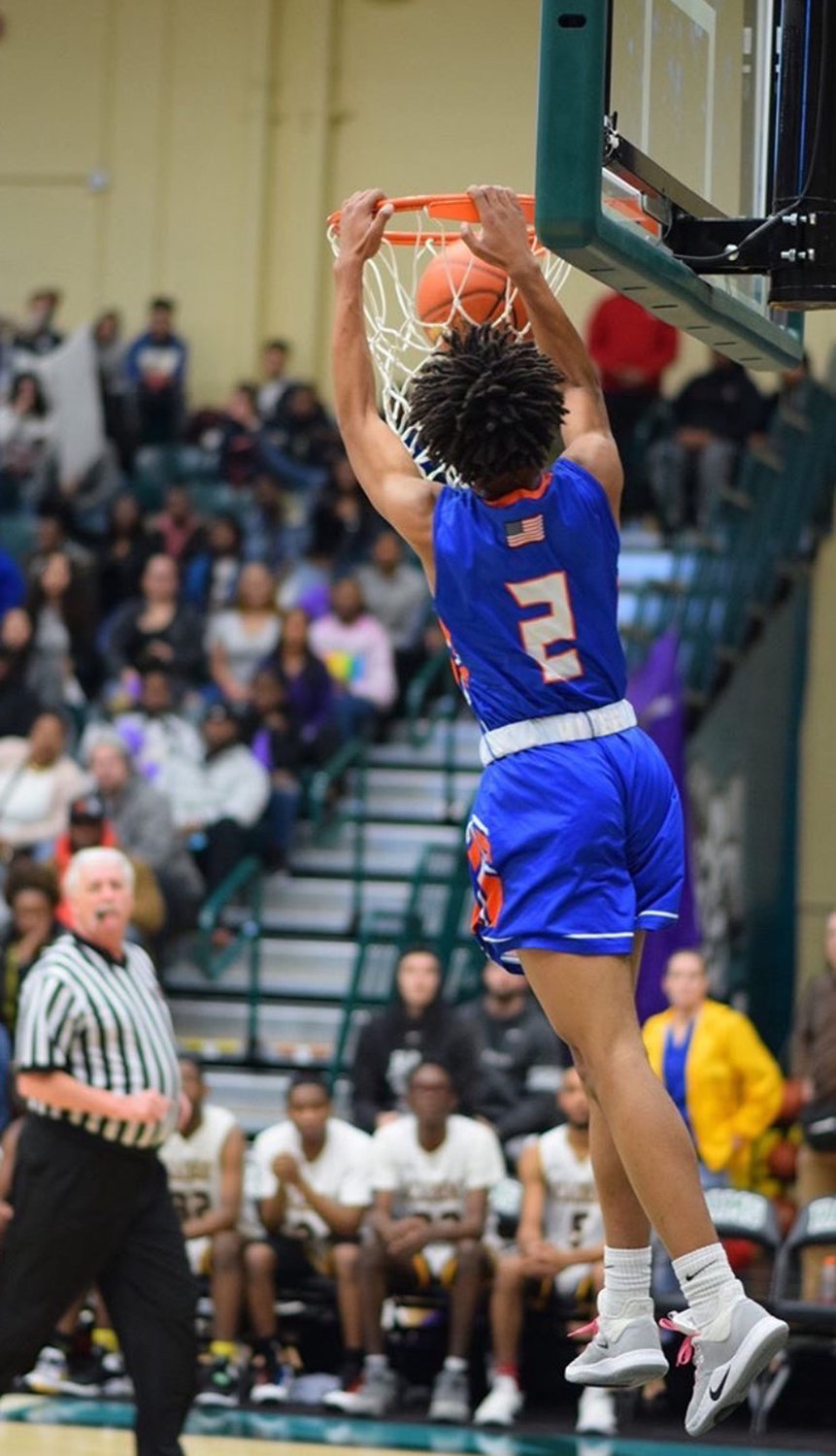 Seraphin, 18, was captain of the 2019-20 Mules team that played in the Long Island Class B basketball championship.
Courtesy Jayden Seraphin
Previous Next
By Holden Velasco

Malverne High School’s former All-County basketball star, Jayden Seraphin, is getting ready to suit up for the Queens College Knights this winter.

Seraphin, 19, was a captain of the 2019-20 Mules team that played in the Long Island Class B championship game against Center Moriches. Although the Mules lost 94-90, the horn at the end of overtime meant more to Seraphin and teammate Michael Warren than the end of the game.

“I dapped him up and gave him a hug,” Warren recalled. “I knew it was hurtful, but it’s not like we went out without a fight. I knew he gave it his all.”

“I thought after the game I would be in tears, because it was the last time I would play [for] Malverne,” said Seraphin, a 6-foot-3 shooting guard, who forced OT with an acrobatic shot with 11.5 seconds remaining in regulation. “But Coach [Darrol] Lopez always told me if you just put everything out on the floor, you’ll never be ashamed of the outcome. So after the game it was all smiles, to be honest. It sounds crazy, since we lost, but I was proud of my team and what we accomplished.”

Seraphin inspired his teammates on and off the court, according to Malverne associate coach Walter Aksionoff. Often the first to arrive at practice, Seraphin, Aksionoff recounted, sought different ways to lead by example.

“He’s a hard worker, and his passion to succeed does not go unnoticed,” Aksionoff said.

Seraphin credits those qualities to his mother, Betty, who died last year. “She knew what she was doing when she was raising me,” he said. “I don’t know how to describe it … for the 17 years that I knew her, she gave me enough knowledge that I can use for the rest of my life.”

What stands out about Seraphin, Warren said, is the impression he leaves with everyone he meets. He added that Seraphin has a natural way of boosting team chemistry, which he believes will pay dividends at the collegiate level.

“My first impression of him was that he was a cool guy,” Warren said. “He was a funny dude. At this time, we were still young, maybe like 11. That hasn’t changed. He’s just more mature now. He’s a real leader. He’s my guy.”

“I just saw a lot of good intangibles that he displayed in just one game,” said Queens College assistant coach Cesar Osses, who recruited Seraphin. “The biggest thing I saw was that he was very coachable, so I felt like he was a great kid with great upside.”

During the preseason, Osses found out that Seraphin is a gym rat and, Osses said, he is always talking with his coaches and teammates. “He’s always active in our group chat, messaging the guys,” Osses said, “and even though he’s a young guy, I can see him being a leader. He’s very talkative, and he’s not afraid to step up and get guys going.”

Seraphin put that on display this summer, when most of the Queens College team played in the Pro-Am CrunchTime Basketball League in Westbury. “At first it felt a little strange, because now I’m playing with people who were all the man wherever they came from,” Seraphin said. "There’s a lot of basketball intelligence that I’m playing with now. Playing with my teammates in CrunchTime just gave me the chance to understand people’s characteristics and their play styles.”

Seraphin’s team was the fifth seed in the league playoffs, and though they lost to the eventual champions, he considered the season a success. “The way we stuck together and came out from the first game, we saw exponential progress this summer,” Seraphin said. “I was just like, ‘wow,’ because we’re playing against teams full of professional players and grown men.”

At Queens College, Seraphin said, he hoped to keep up the momentum and good morale. Osses said he couldn’t be happier about Seraphin putting on the Knights’ blue and silver.

“Even though Jayden’s a great player, I think he’s going [to] be a great representation of our program outside the court,” Osses said. “I think we picked a great person to have for Queens College as a whole, and our basketball team.”

Seraphin said he couldn’t wait to make his college debut this winter. Asked if his mother would be proud of him, he replied, “Oh yeah, most definitely. Most definitely.”