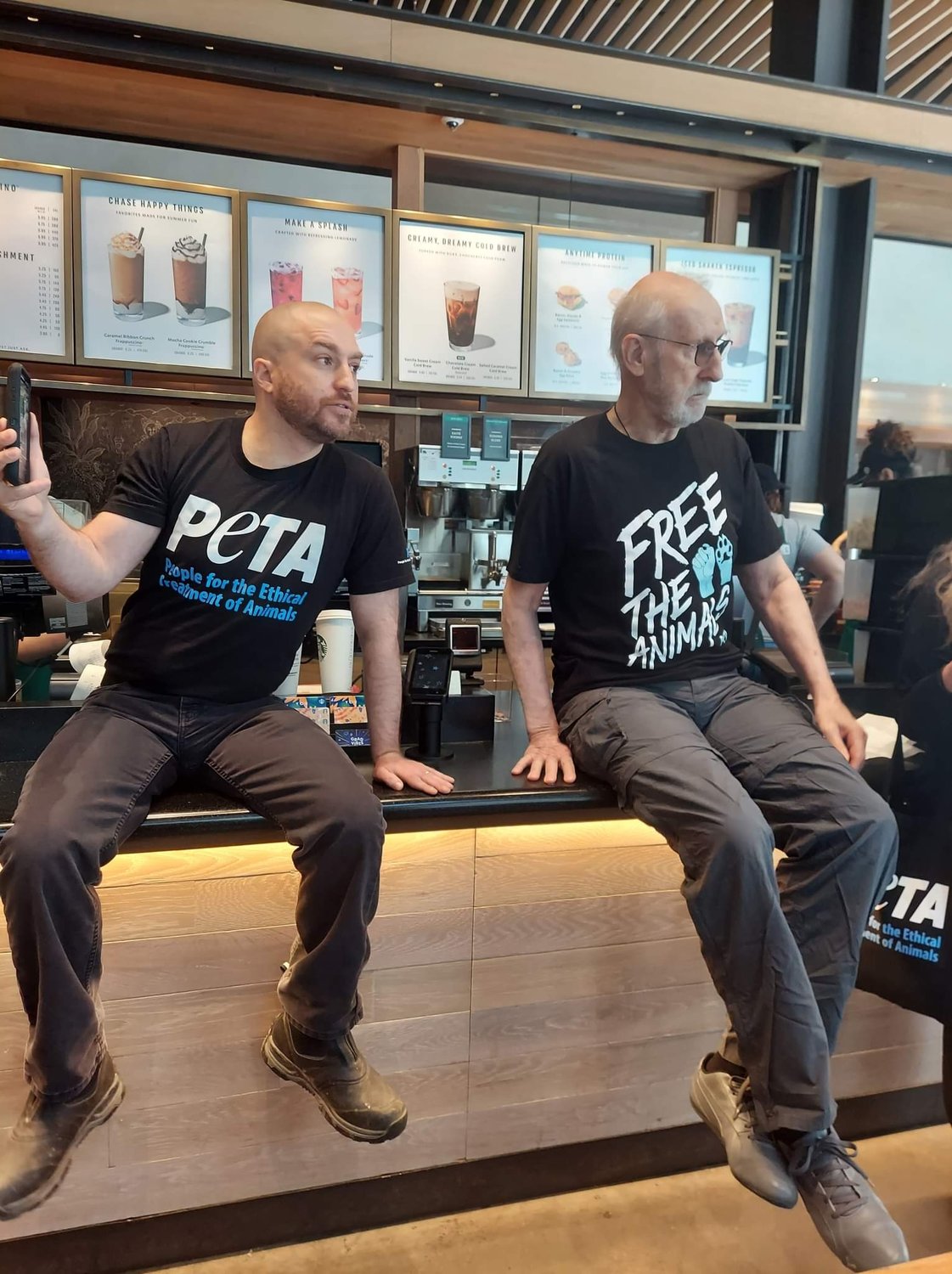 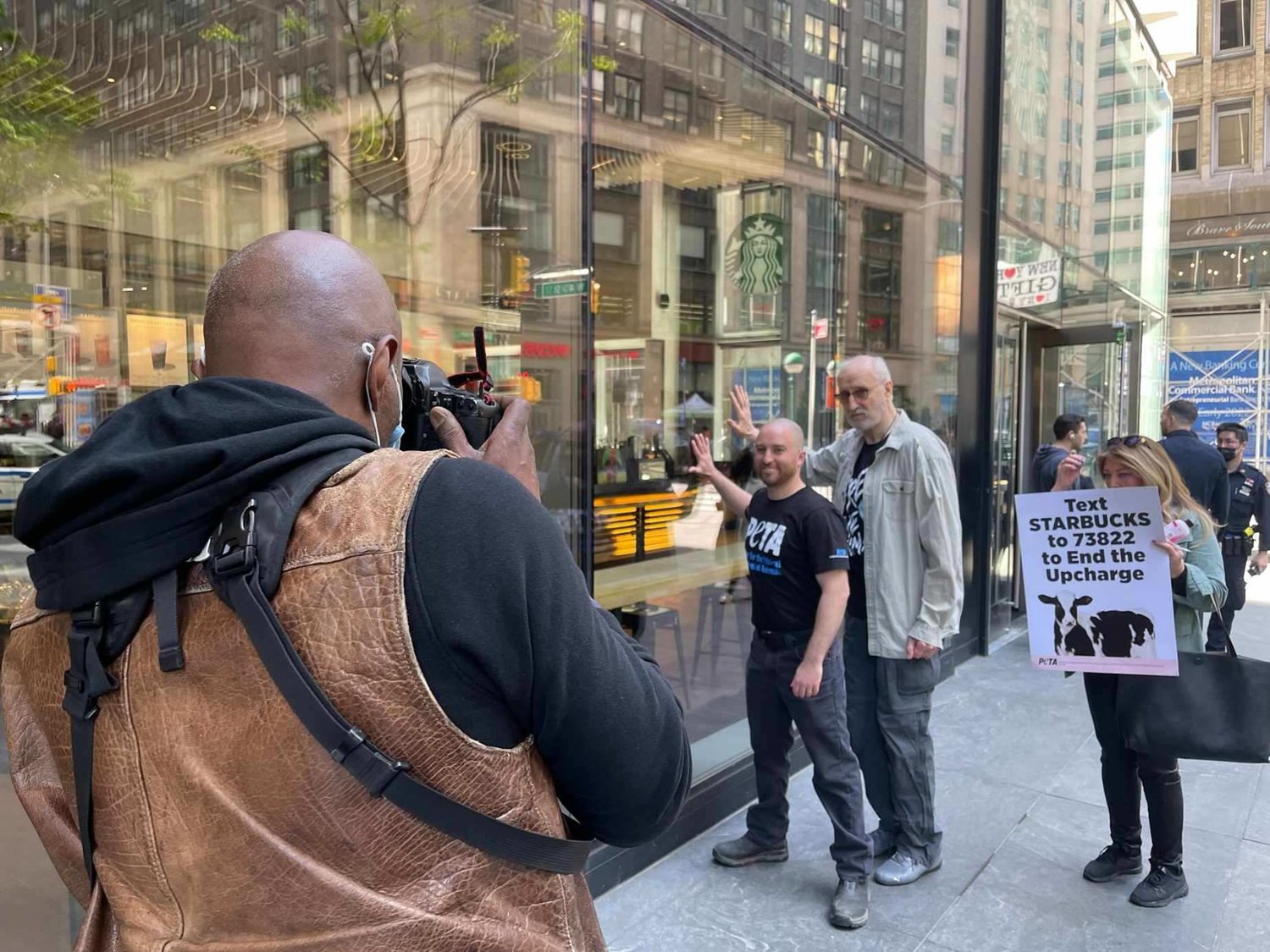 When Oscar-nominated actor James Cromwell drew national attention by supergluing his hand to a counter at a midtown-Manhattan Starbucks on May 10 to protest the chain’s upcharge on non-diary milk, an animal activist from Malverne was also at the heart of the demonstration.

John Di Leonardo, president of Long Island Orchestrating for Nature, or LION, attended the protest, at a Starbucks at Broadway and 40th Street, which was orchestrated by People for the Ethical Treatment of Animals. Di Leonardo is the former senior manager of Animal Entertainment and Grassroots Campaigns for PETA but left the organization last year to take the reins of LION.

Calling LION the “leading animal advocacy organization on Long Island,” Di Leonardo said it was originally founded as a circus protest organization but expanded its focus to combating slaughterhouses, aquariums and wild animal acts, and most recently has been instrumental in domestic fowl rescues.

He hooked up with PETA once again last week when he was contacted to take part in the protest with the actor.

“We left on very good terms, and they know I’m still there if they need help with any of these exciting demonstrations,” Di Leonardo said of PETA. “My former colleagues at PETA set it up and they were looking for a prominent activist to join James and thought I’d be perfect for it and I was happy to play that part.”

Starbucks charges about 70 cents for dairy alternatives in the U.S. but recently dropped the surcharge in the United Kingdom.

Di Leonardo said that the cause is a simple matter of ethics.

“Starbucks is basically penalizing people who want to have a more ethical and humane choice,” he said, “especially when Starbucks has admitted that dairy is worse for the environment. There’s so many forests being slashed and burned to put more cows on this land. So if Starbucks really cares about animals, the environment and people of color, who are disproportionally perceptible to lactose intolerance, they need to drop this upcharge immediately.”

Cromwell is known for his roles in “The Green Mile” and “L.A. Confidential” and plays Ewan Roy in the HBO series “Succession.” He was exposed to the cruelties of the agriculture industry during his work on “Babe: Pig in the City” and has since become known as a longtime supporter of PETA, serving as honorary director and participating in many animal rights demonstrations, most notably at SeaWorld parks.

Therefore, his leading role at last week’s demonstration came as no surprise.

“My friends at PETA and I are calling on Starbucks to stop punishing kind and environmentally conscious customers for choosing plant milks,” Cromwell said. “We all have a stake in the life-and-death matter of the climate catastrophe, and Starbucks should do its part by ending its vegan upcharge.”

Di Leonardo said that Starbucks has not issued any public statement since the protest, except to claim that the upcharge is a cost-saving measure,

““We respect our customers’ rights to respectfully voice their opinions so long as it does not disrupt our store operations,” Summers said. “The products we offer our customers in our U.S. stores are priced in line with the broader industry we’re continually evaluating prices on a product-by-product market-by-market basis and we’re balancing how to run our business profitably while continuing to provide value to our loyal customers and attract new customers.”

But DiLeonardo doesn’t buy it.

“Everything is just supply and demand,” Di Leonardo said. “If they drop the vegan upcharge, more and more people are going to be buying these non-dairy milks and the prices are going to go down anyway. Starbucks has plenty of money and certainly can afford to drop the surcharge.”

He added that many other coffeehouses have already dropped the upcharge, such as Panera Bread and Pret a Manger.

“You can even get oat milk, coconut milk, almond milk and soy milk and so many other types of other milk without a vegan upcharge at so many other establishments,” Di Leonardo said. “It just shows that it’s just a matter of time before Starbucks gives in and follows the lead of its affiliates all around the world to drop the upcharge and allow customers to make the environmentally-conscious choice.”

He said that the energy in the coffee shop on the day of the demonstration was infectious, as others were quickly drawn into the cause.

“A lot of people were very supportive,” Di Leonardo said. “Everybody at this time is trying to save their money and if you can save your money while also saving animals and the environment, it’s all the better. We broke into a chant of ‘Save the planet, save the cows, end the vegan upcharge now,’ and a lot of people joined in that chant.”

The demonstrators are taking issue with the larger Starbucks’ corporation and not the local shop and tried to cause as little disruption as possible to the normal operation of the midtown shop.

“The district manager [of Starbucks] was not happy we were there and wanted us to leave, but we weren’t willing to leave,” Di Leonardo said. “We were there for a cause and we weren’t going to go down so easily. We left the workers a nice big tip for disrupting their business and we also gave out free vegan lattes to people waiting in line so their day wasn’t disrupted. We’re obviously on the side of the little guy.”

PETA said it would continue fighting until the upcharge is dropped.

“Starbucks’ vegan upcharge is milking customers who choose vegan lattes for the sake of cows, the planet or their health,” PETA Executive Vice President Tracy Reiman said. “PETA will stick to Starbucks like glue until it agrees to drop the vegan upcharge.”

Those wishing to join the cause can sign PETA’s petition at https://bit.ly/3lbf9OQ.