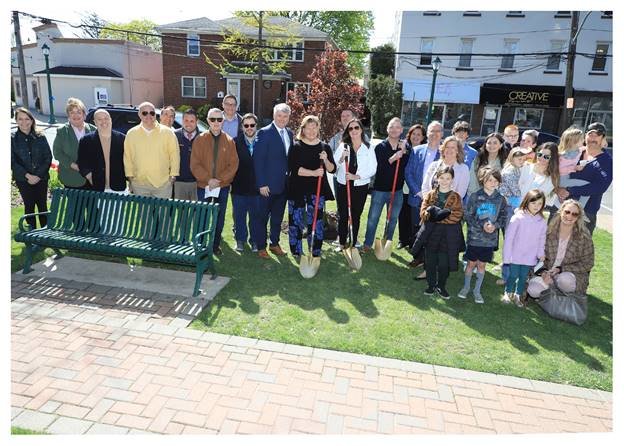 Elected officials and family and friends gather to plant a tree for the Schuttas.
Courtesy Legislator Bill Gaylor
By Jake Pellegrino

The Malverne village board, Hempstead Town board, Malverne residents and Legislator Bill Gaylor gathered, on April 30 at the village gazebo, to plant a tree in memory of Joseph and Carol Schutta for Arbor Day, who died within six months of each other.

The Schuttas were long-time residents of Malverne and very active in the community, including Our Lady of Lourdes parish. Carol was also a teacher, and Joseph was a Marine and NYPD officer.

“The Schuttas were very big volunteers in village from early on at our youth boards and later on through the Our Lady of Lourdes food bank,” Village Clerk Jill Valli said. “They were really just here so long and every event we asked them to participate in, they were always there front and center and a lot of memories from the residents over the last 50 years include the Schuttas. They were just an essential part of the fabric of this community.”

The family said that they were touched that the village gave back to them for their many years of service to Malverne.

“Mayor Corbett reported that he wanted them to have a tree near the east side of the park where he would see them sitting for many of the village events,” their daughter Sally said. “This location is particularly special to them because it is near the apartment they rented when their home was under renovation to make it accessible but more importantly it is located near Scooop ice cream shop where they often brought the grandkids for treats.”