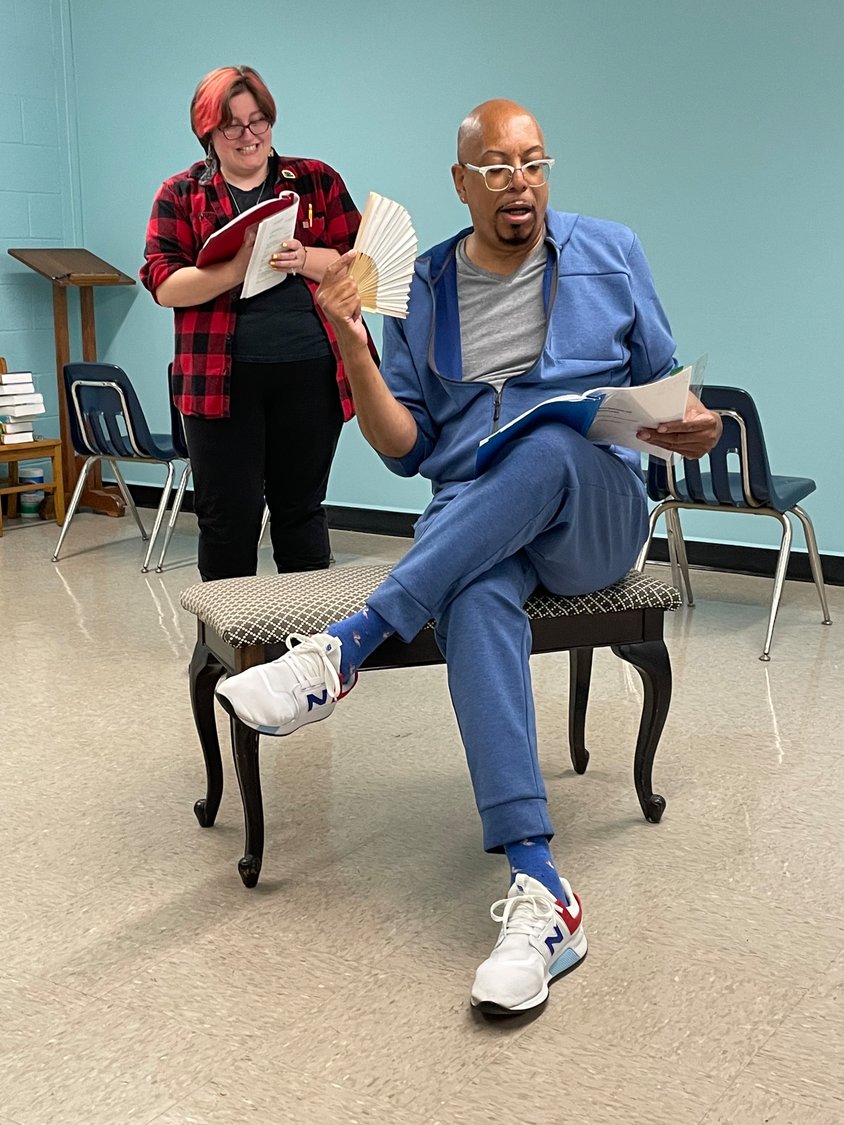 Morgan Moffitt and Van Whitaker in rehearsal for Being Earnest at Westbury Arts for EastLine Theatre.
Courtesy Danny Higgins
By Kyle Chin

Long Island theatre makes a comeback next month in a production spearheaded by Malverne playwright Danny Higgins — all with a modern spin on a classic play.

The new production is presented by the non-profit EastLine Theatre, which in its own words are “committed to queering the canon, exploring modern plays, and bringing original works to the attention of the community.”

True to that commitment, “Being Earnest” attempts to center the queer subtext of the famous Irish playwright and poet, who died from meningitis in late 1900,.

“Wilde lived in a time and place where you could get jailed for any mention of what he called ‘the beauty that dare not speak its name,’” Higgins said. “Now we really have an opportunity to bring those elements front and center.”

While Wilde was forced to keep his own gay experiences hidden behind subtle implication, Higgins hopes this reimagining will bring a modern sensibility to Wilde’s work.

The forward-thinking attitude extended to the casting process as well. In choosing performers for each role, Higgins said the production team made no considerations of race or gender, but simply picked actors who best fit their character.

“We tried to take the attitude of the new pride flags, the progress pride flags, where you see this eclectic celebration of differences,” Higgins stated. “There’s a kind of ‘utopian-ness’ we’ve gotten with how we’ve done things. I think the production can shine a light on what could and should be.”

The progress pride flag was designed as a modern take of the traditional rainbow flag by Daniel Quasar, incorporating other stripes and colors to represent a far more vast community., which includes browns, blues and pink

Higgins also considered the effect the coronavirus pandemic has had on local theatre and the types of stories being told.

“There’s been a lot of discussion about a return to normal,” he said, “but I think we’re all realizing there’s no going back to the old normal. There’s only going forward.”

Higgins reflected that the halt in live productions gave him and his peers in the theatre community time to take pause.

At the height of the pandemic, the play had been broadcast through online streaming video. But cast and crew are excited for a return to in-person performances.

With the production coming with the start of Pride in June, the team behind the play hopes to add to celebrations in their own small part.

“Compared to New York City, the dynamic can be pretty different with the LGBT community spread out on Long Island,” Higgins said. “But we’ll definitely be taking our flags out.”

“Being Earnest” will playing at the Westbury Arts Council between June 3 and June 11. To lesrn more, visit EastLineTheatre.org.