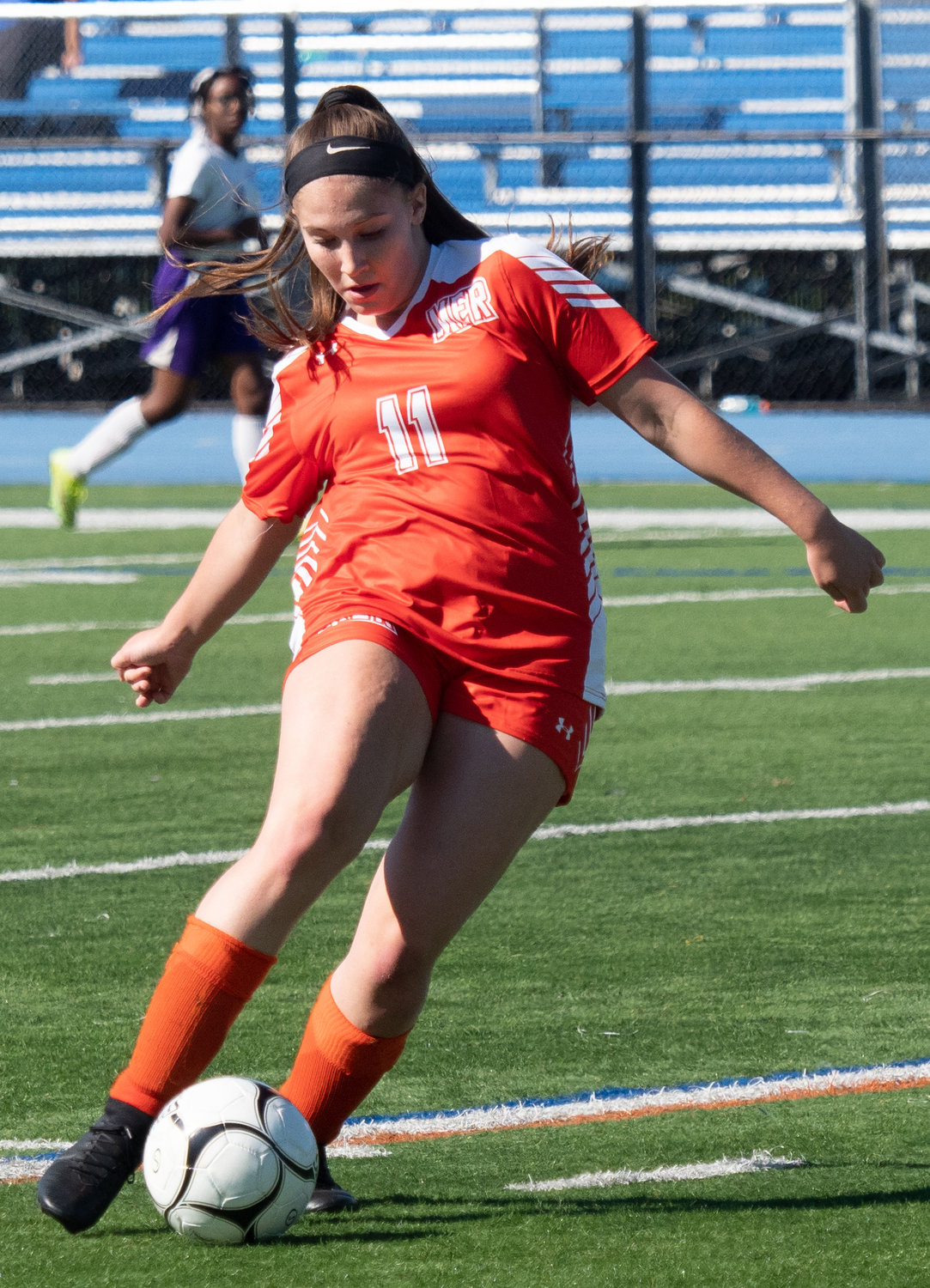 Julia Brienza is one of many key pieces for Malverne/East Rockaway as it looks to make a signifcant rise in the standings after a difficult spring season.
Eric Dunetz/Herald
By Tony Bellissimo

Navigating a higher level of competition last season proved a rough road for Malverne/East Rockaway’s girls’ soccer program, but a return to familiar territory with most of its roster intact has longtime coach Joe Lores excited about a considerable rebound.
“I really don’t know why we were bumped up a league, but now we’re back where we belong and where we’ve always been, and bringing back almost the entire team,” Lores said. “I think the stiff competition we faced like Cold Spring Harbor, Carle Place and Wheatley is only going to help us this season.”
The Rockin’ Mules will compete in a conference comprised of West Hempstead, Sewanhaka, Roslyn, Great Neck North, Elmont, Roosevelt and Lawrence. They went a respectable 4-5-1 against a similar set of foes in 2019.
Lores said they have only a couple of starting jobs to fill, with one being the last line of defense. Senior Jazmine Ackies (Malverne) shared the goalkeeper responsibilities in the spring and will get first crack to land the job. “She’s enthusiastic about playing the position and has varsity experience which can be valuable,” Lores said. “Our entire defense is back, so I think we’re going to be difficult to score against.”
Kendra Chinchilla and Princia Ulysse, both Malverne seniors, and sophomore Ema Basic (East Rockaway) barely came off the field last season, Lores said, and will remain vital to the team’s success this fall. “Kendra is a four-year starter and our leader,” Lores said. “She handles all of our goal kicks and cleans everything up. She comes from a strong soccer family and brings a high soccer IQ and plays physically.”


Lores describes Ulysse as one of the best athletes on the roster. “She’s a tremendous basketball player contributing on the soccer field and that’s never a bad thing,” he said. “She’s fast and athletic and gives her all.”
Basic is a travel soccer player with a lot of experience. Lores said in the case where he would mark an opponent one-on-one, Basic would get the assignment to do so.
A three-sport athlete who also competes on the basketball court and softball diamond, senior Mimi Bilardello (East Rockaway) is an All-Conference midfielder who can help control the center of the field and put the ball in the net. She had four goals in 2019 and added two more last season. Lores would like to get junior halfback Julia Brienza (Malverne), who plays on the travel circuit, more involved in the offense. She could see time at forward along with versatile freshman Avery Whitehouse, another travel player who scored her first varsity goal in the spring.
Juniors Emma Keller and Sabrina Ramharakh, both from Malverne, are skillful and athletic forwards who’ll be counted on to help get the Rockin’ Mules’ production back to 2019 form.
“The chemistry should be good and we’re more experienced,” Lores said. “No excuses to not have a competitive season.”