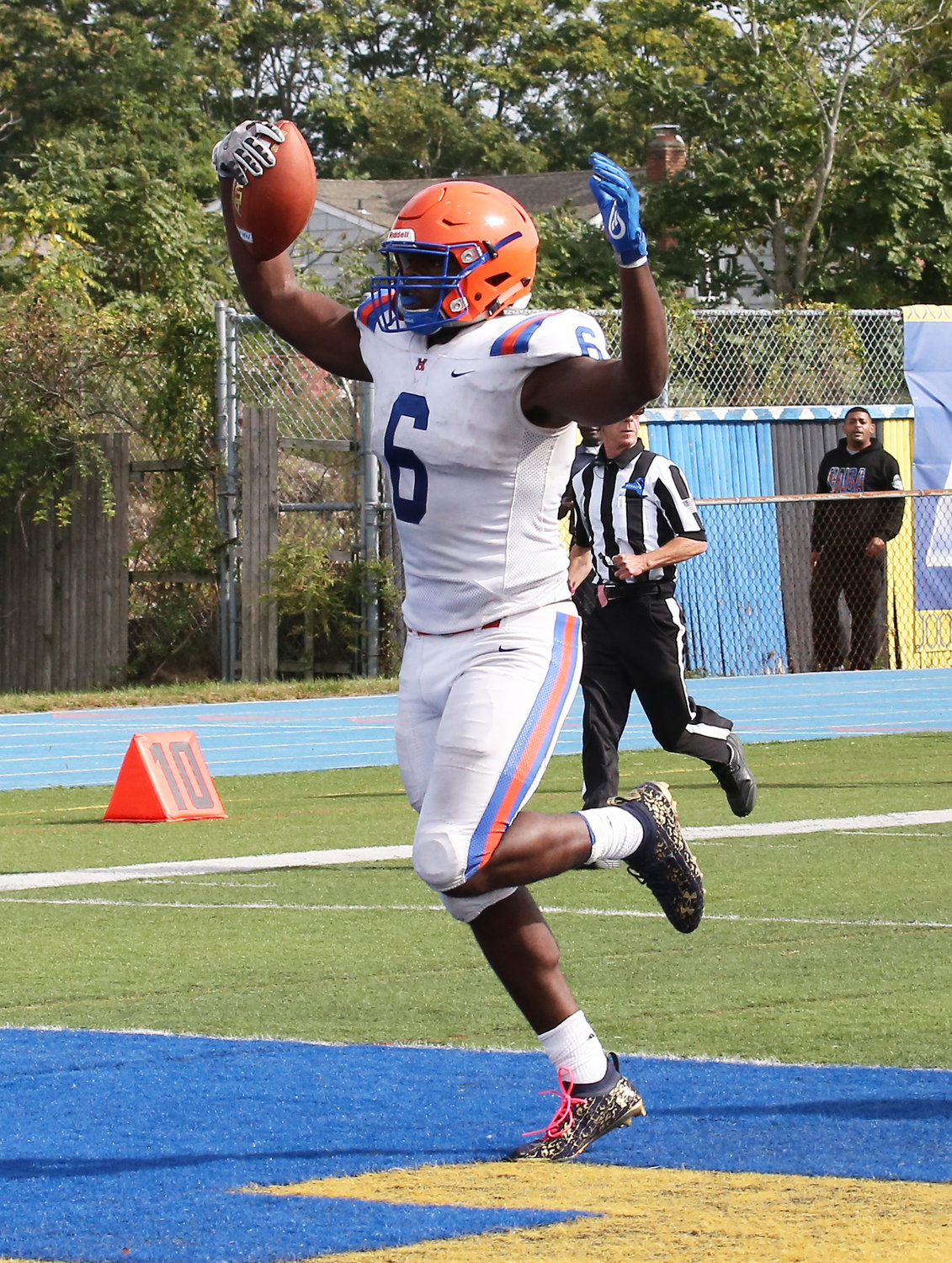 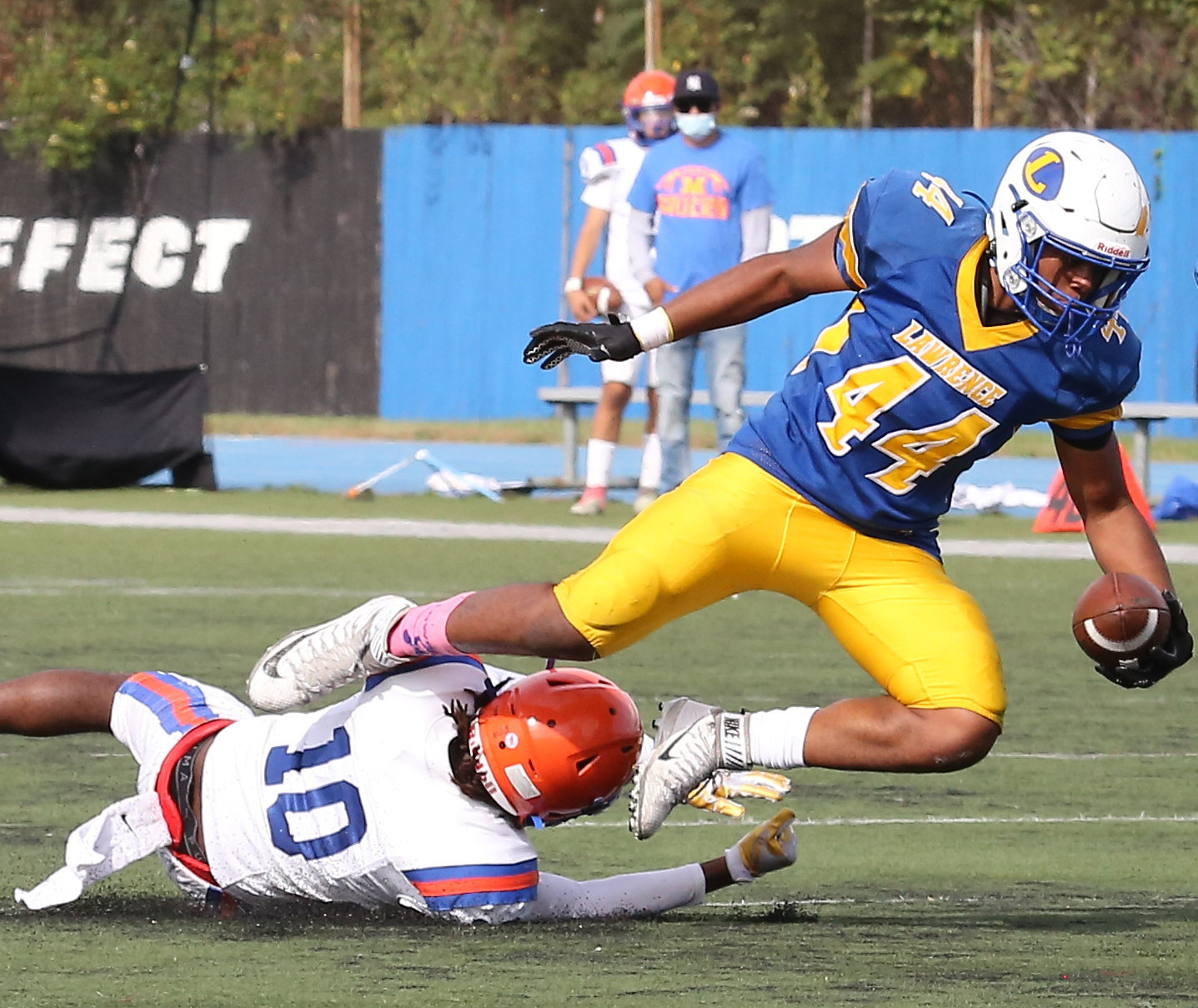 In the blink of an eye — 21 seconds to be exact — Malverne took control of Saturday’s Nassau Conference IV football game at Lawrence after the teams battled toe-to-toe for the first 23 minutes.

The Mules broke a tie with touchdowns on back-to-back plays in the final 50 seconds of the opening half and scored 28 unanswered points on the way to a 34-6 victory. Junior tailback Norman Brown rushed for 100 yards, including the go-ahead score and two-point conversion late in the second quarter, and junior quarterback Farvens Ulysse threw for a touchdown in each half as Malverne (3-2) moved over the .500 mark while dropping the Golden Tornadoes to 1-4.

“Offense sells tickets and defense wins championships,” Malverne head coach Kito Lockwood said. “We needed to improve our tackling and spent a lot of time on it this week. Lawrence has some kids we knew we had to stop.”

Malverne’s defense not only tackled well, but it also came up with the biggest play of the afternoon. On Lawrence’s first snap after Brown put the visitors ahead 14-6, junior Michael Williams and sophomore Hugh Wilkerson III pressured quarterback Kayne Robinson and forced a fumble. Wilkerson scooped it up at the 6 and rolled into the end zone with 29 seconds remaining in the half. It was 21-6 after Javier Fuentes’ extra point.

“I never gave up on the tackle and got my hand on the ball and stripped it,” Williams said. “When I got up, I saw the ball on the ground and tried to run to it. Then Hugh picked it up and it was all good.”

Wilkerson added 7 tackles and fellow sophomore Jedidiah Aidelogie recorded a pair of sacks. “It got us rejuvenated,” Wilkerson said of his touchdown. “I’m never going to forget it.”

Lawrence’s lone score came with 3:53 left in the half when senior Kody Kirchner capped a 70-yard drive with a 2-yard touchdown. Kirchner began the season at quarterback but moved to the backfield when Robinson, a senior wide receiver, was handed the keys to the offense.

“We had a really nice drive to get even, but the end of the first half was really the whole game,” Lawrence head coach Jason Supple said. “At halftime we talked about coming out and getting a stop to start the third quarter. We had them third-and-long multiple times and the defense couldn’t get off the field.”

Ulysee, who connected with senior Deandre Blagrove on a 24-yard touchdown pass early in the second quarter to open the scoring, hooked up with senior Jaden Manzanillo on a 30-yard touchdown strike midway through the third for a 27-6 lead. In the fourth, a 72-yard run by senior Tyler Rouse set up sophomore Brandon McLauglin’s 2-yard touchdown.

The Mules play their final regular-season home game this Friday at 7 p.m. versus Carle Place. The Golden Tornadoes hit the road for the last time when they travel to North Shore on Saturday for a 2 p.m. kickoff