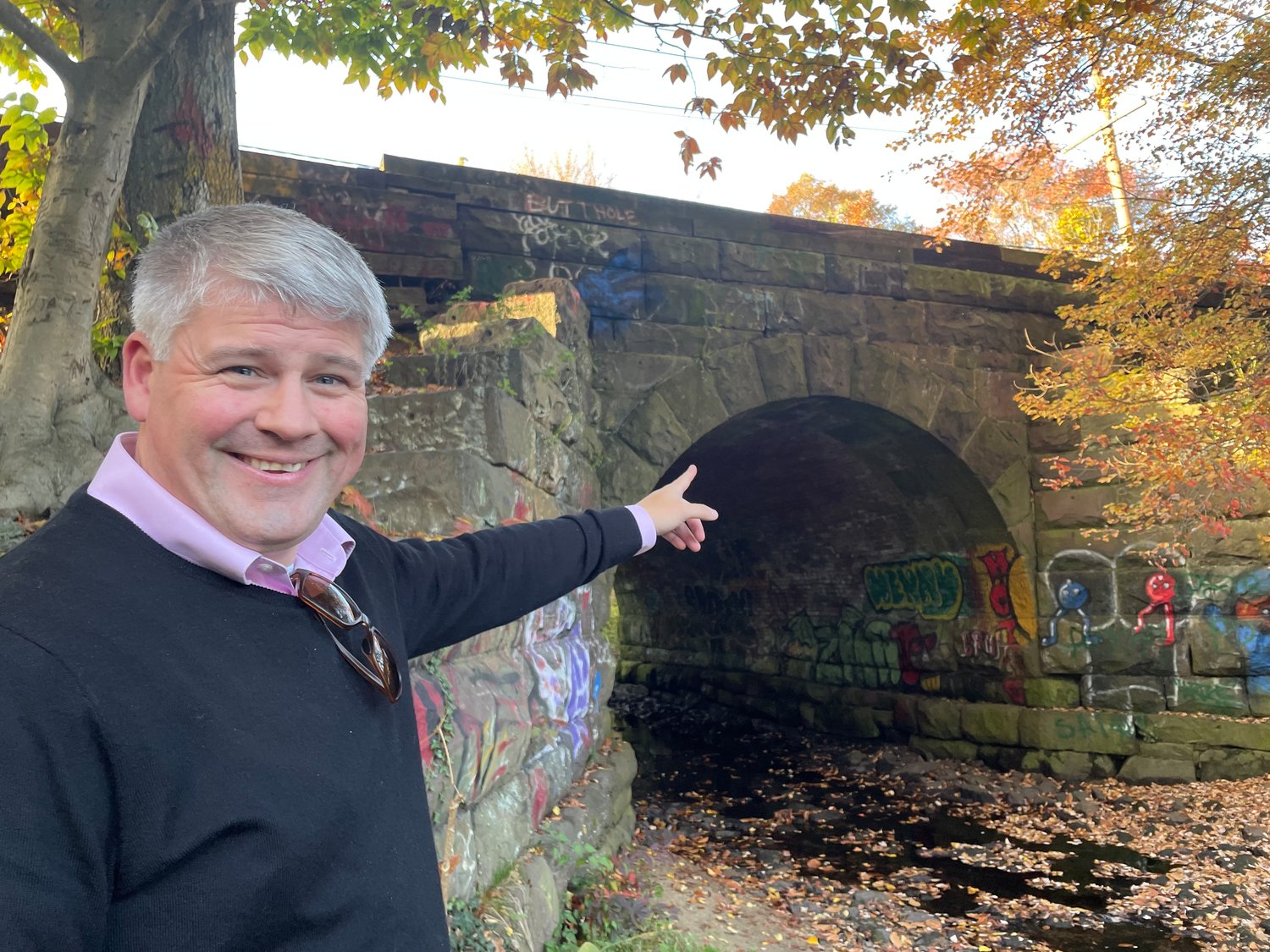 Mayor Keith Corbett beside a near-century-old stone train trestle that crosses over a stream flowing into Mill River. The bridge will serve as one end of a new walking path beside the stream.
Kyle Chin/Herald photos 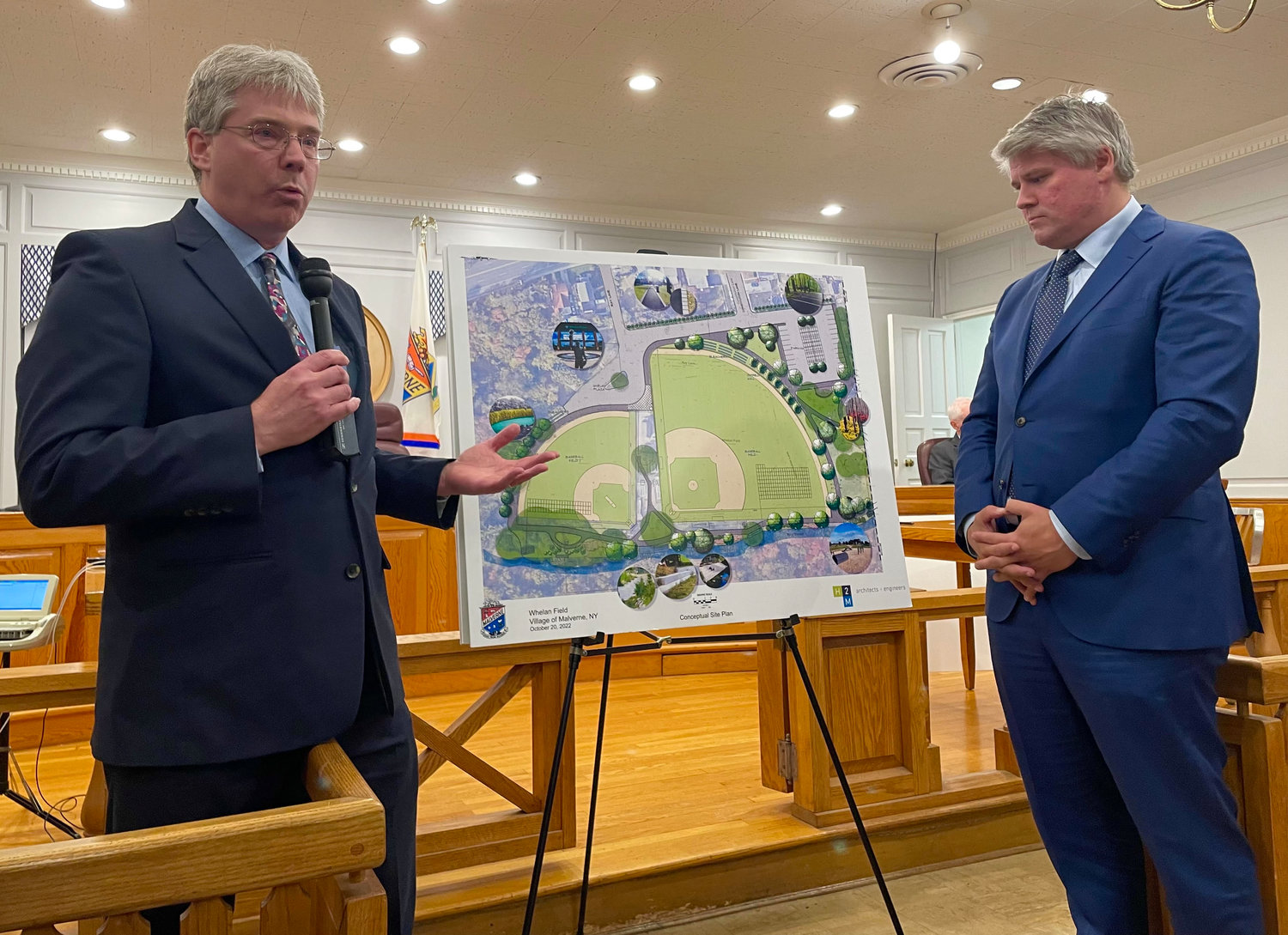 Matthew Mohlin, vice president of the architectural firm H2M, left, joined Corbett at a village board meeting on Oct. 20 for a presentation on a number of proposed upgrades to Whelan Field.
Kyle Chin/Herald photos
Previous Next
By Kyle Chin

Malverne’s Whelan Field is set to undergo a complete overhaul in 2023, with initial plans for the upgrades unveiled at a village board meeting on Oct. 20.

Whelan Field, a pair of baseball fields used by the Malverne Little League, is tucked away off Ocean Avenue, currently accessible via the short streets Ray Lane and Constitution Lane.

The plan also calls for the creation of a paved walking path around the fields, extending along the neighboring stream, with exercise stations and ecological information signs. One end of the path would be a near-century-old stone Long Island Rail Road trestle that bridges the stream, and a series of tiered steps would access the cleaned-up stream.

The architectural and engineering firm H2M, based in Melville, has drawn up conceptual designs for the project.

“One of the things the board’s been working on is actually the largest grant we’ve ever received in the history of Malverne,” Mayor Keith Corbett said at the meeting. “We received just shy of $7 million to completely renovate Whelan Field.”

“I do have to thank Trustee (Tim) Sullivan and the entire board,” Corbett added. “But Trustee Sullivan, in particular, has been working very closely in putting this together.”

The overriding purpose of the project is to bolster flood-resistance infrastructure along the stream, though that will be less apparent to the public. The stream is a tributary to Mill River, connecting with Hall’s Pond, in West Hempstead, to the north. The Mill River empties into the East Rockaway Channel to the south.

“We are going to be constructing some stormwater management systems on the field,” explained architect and H2M vice president Matthew Mohlin. “Right now the park has no stormwater management infrastructure at all. So the fields will be grass, but we’re putting in a new subsurface retention system that will contain the stormwater runoff, which will overflow into the creek.”

Mohlin further explained that the changes would reduce the volume of trash, pesticides and other pollutants entering the Mill River water system.

The funds for the project were procured through the Governor’s Office of Storm Recovery, which was created in 2013 in the aftermath of Hurricane Sandy. “That’s the reason why we have to work with the state to really get this in, to really make those infrastructure improvements,” Corbett said.

“First we negotiated with Governor Cuomo’s office,” the mayor added. “He did agree to provide the largest grant we’ve ever received. Then, obviously, Governor Cuomo is no longer there. I do have to thank Governor Hochul for living up to the promise that the past administration made.”

While the new water infrastructure will be important, Mohlin highlighted the aspects of the project that will be most visible to the public. “The benefit of this grant is that it gave the village an opportunity to incorporate a lot of the fun stuff — the stuff that you guys are going to (interact) with on a daily basis,” he said. “That’s really what’s going to bring this project to life.”

Residents may also note changes to the streets surrounding the fields. The section of Ray Lane that runs alongside the park will be moved west to allow expansion of the park. And while Ray and Constitution Lane are currently two-way streets, Corbett suggested that they may become one-way to smooth the flow of traffic to and from the field.

A timeline has not yet been set for the project, but the bulk of the work is expected to take place next year.

“The enhancements to Whelan field will be game-changing for the residents of Malverne,” Corbett said. “We are building state-of-the-art recreational facilities for our children and all of our residents to enjoy.”