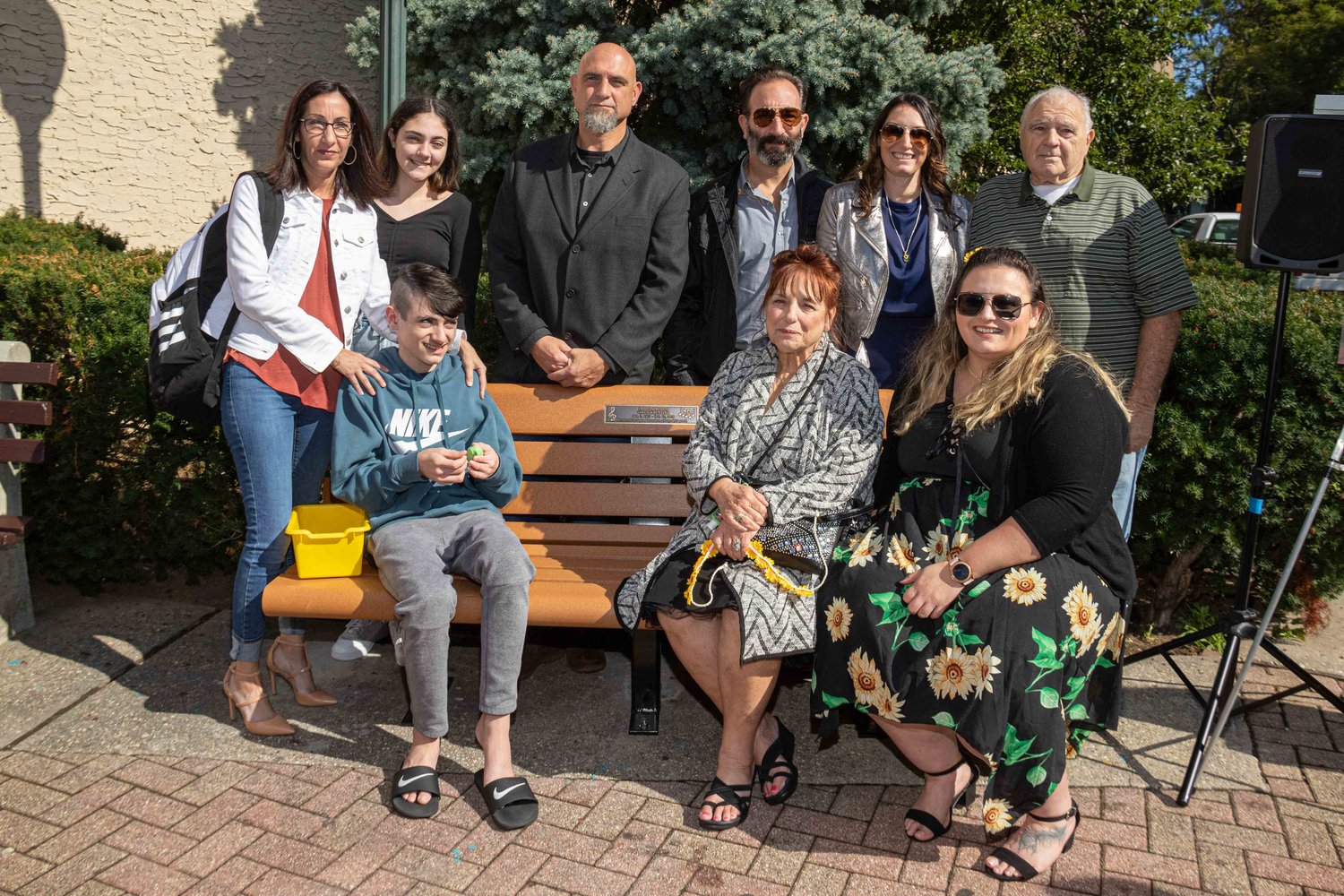 Friends and family gathered for the dedication in honor of Viki Sorrentino in Bellmore. The Viki Sorrentino Foundation will continue her legacy by helping students pursue careers in music.
Janette Pellegrini/Herald 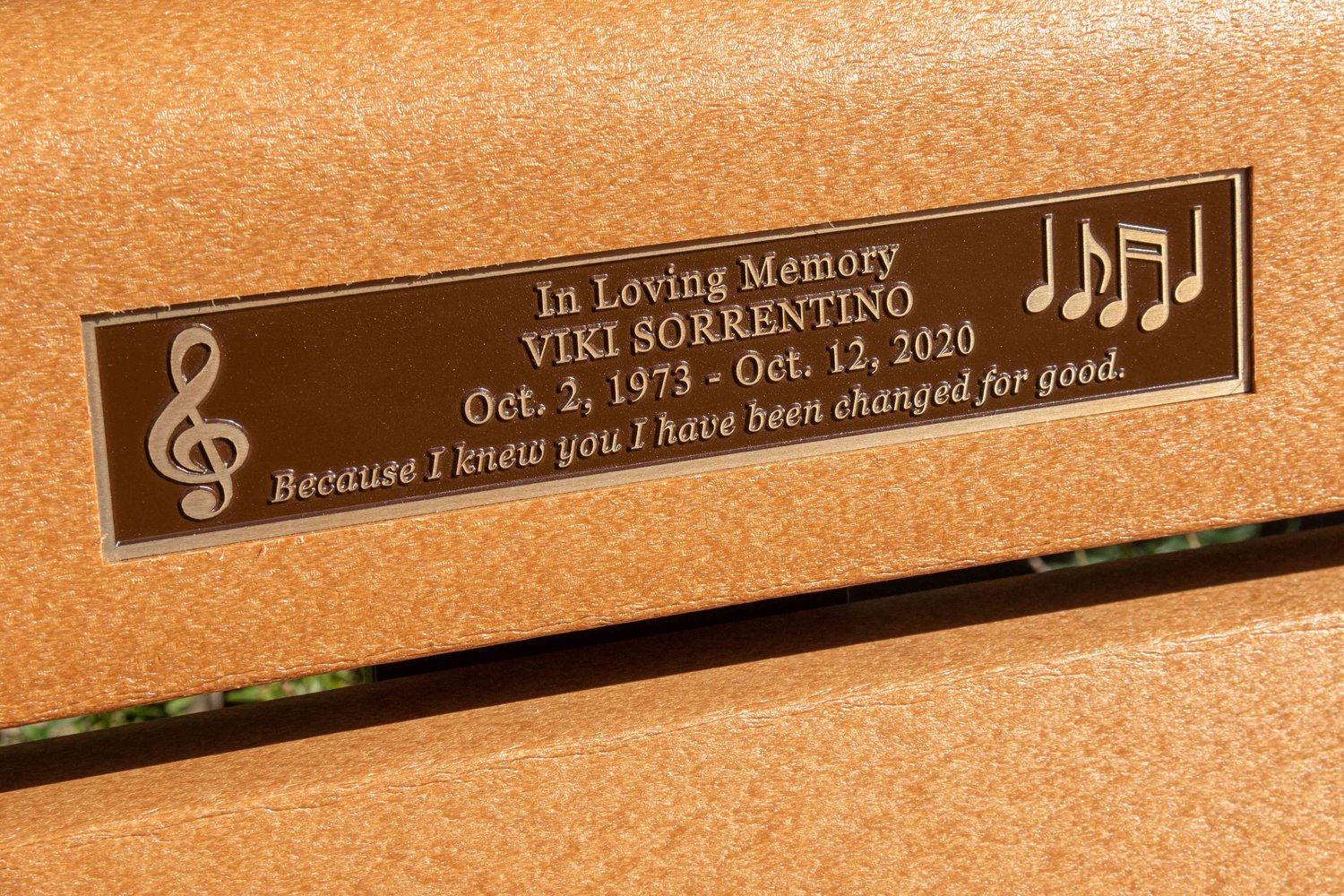 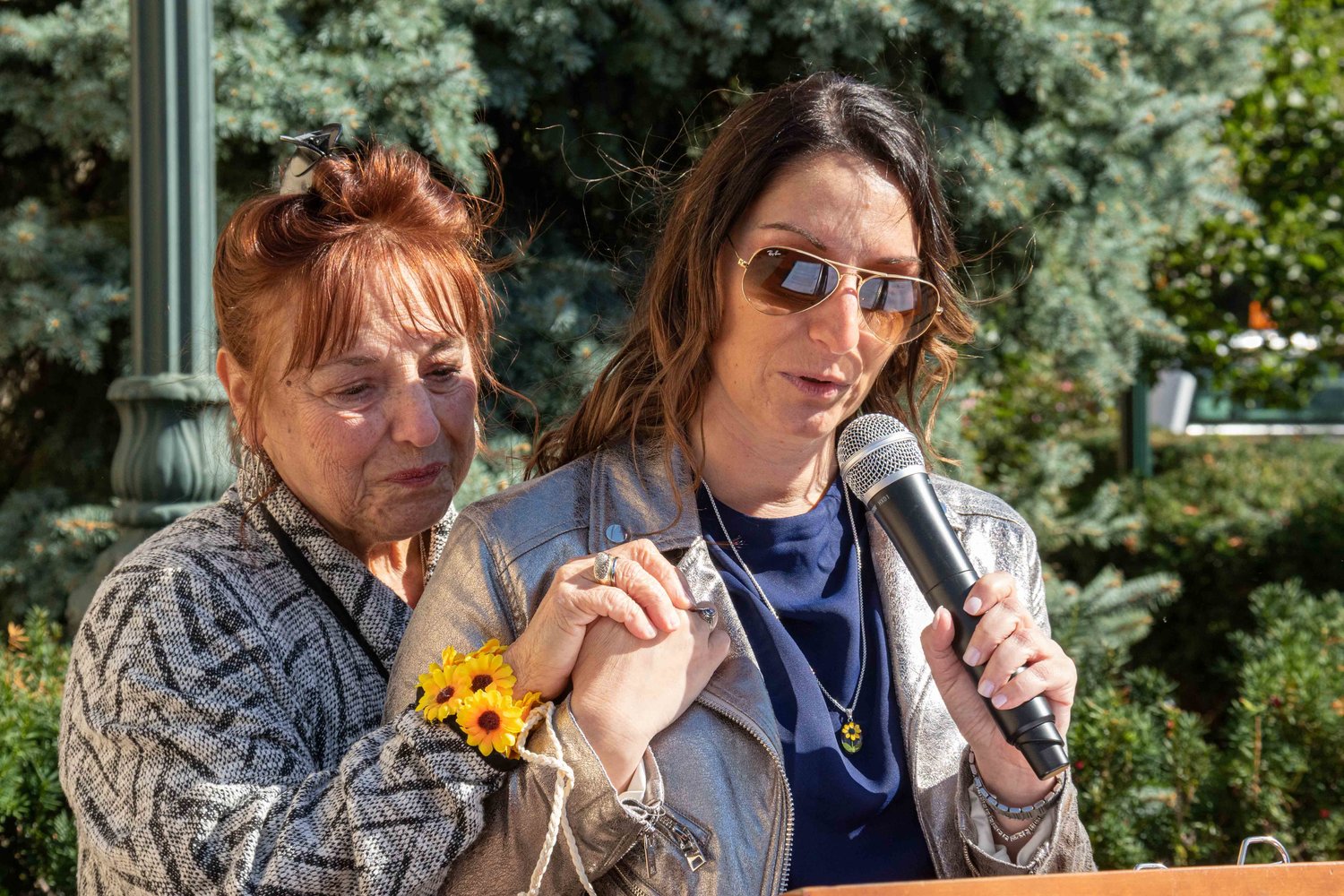 It was an emotional event for Viki’s mother and sister, Rosemarie and Nicole Sorrentino.
Janette Pellegrini/Herald 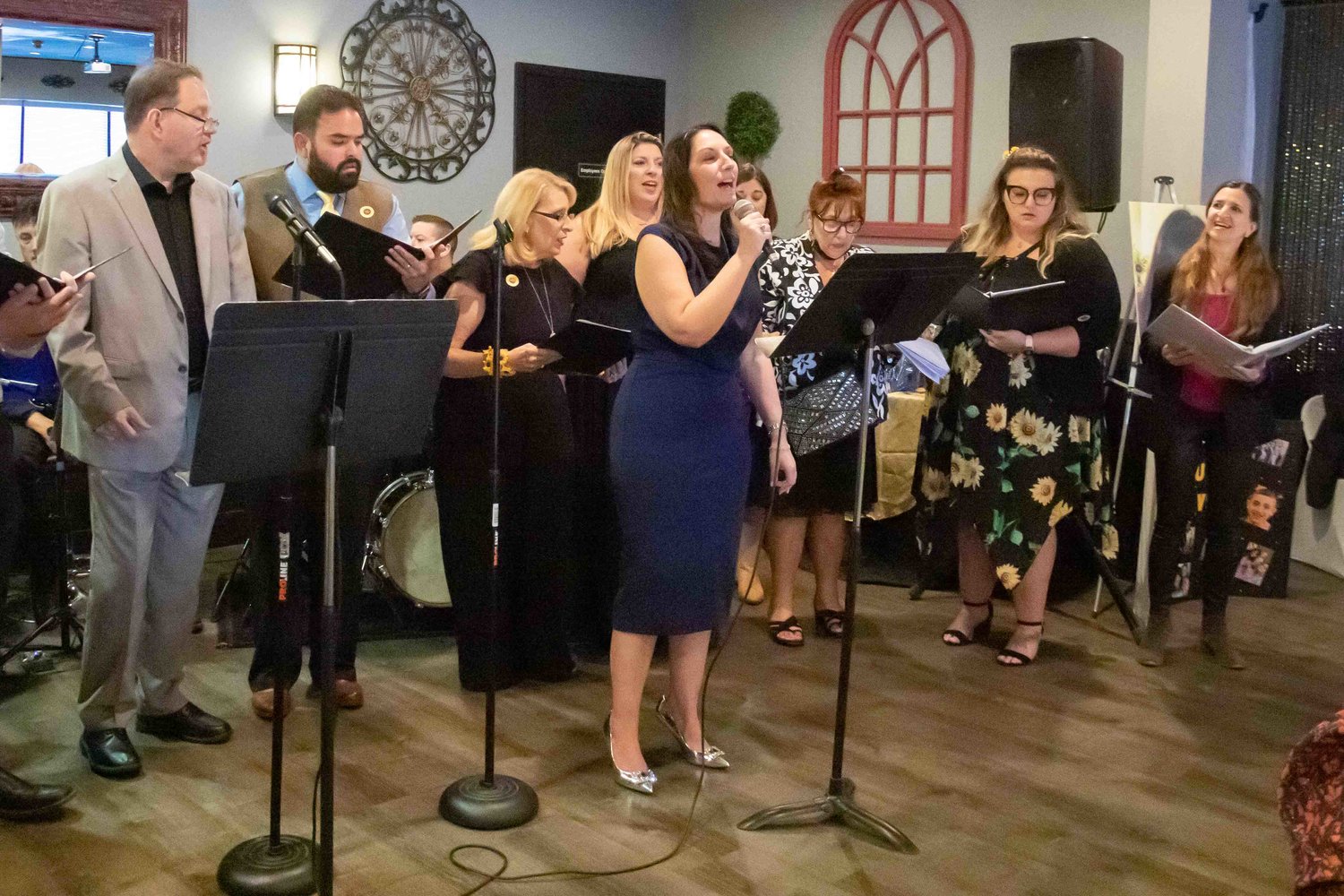 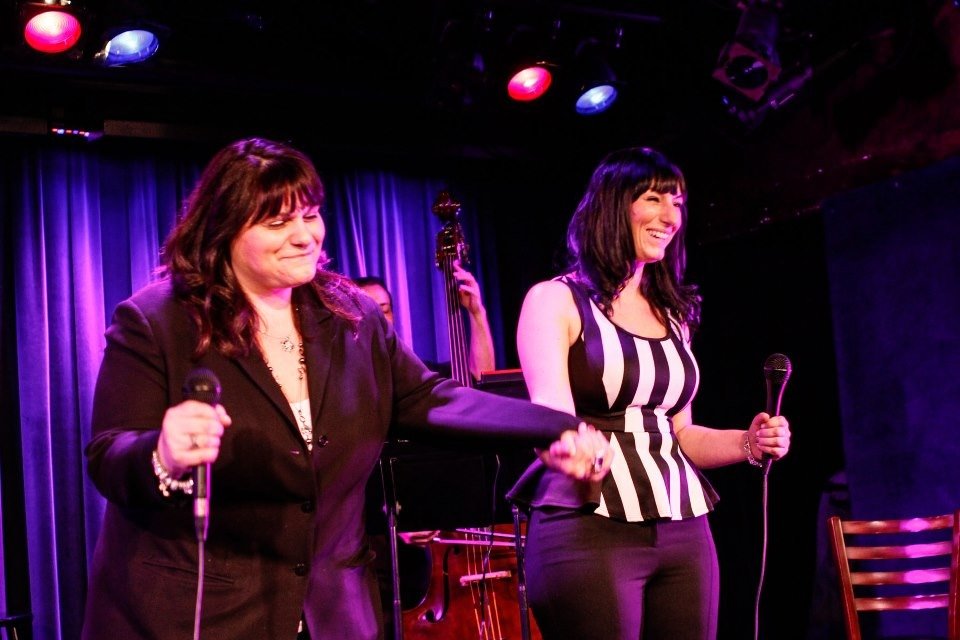 Viki and Nicole on stage at a performance.
Courtesy Nicole Sorrentino 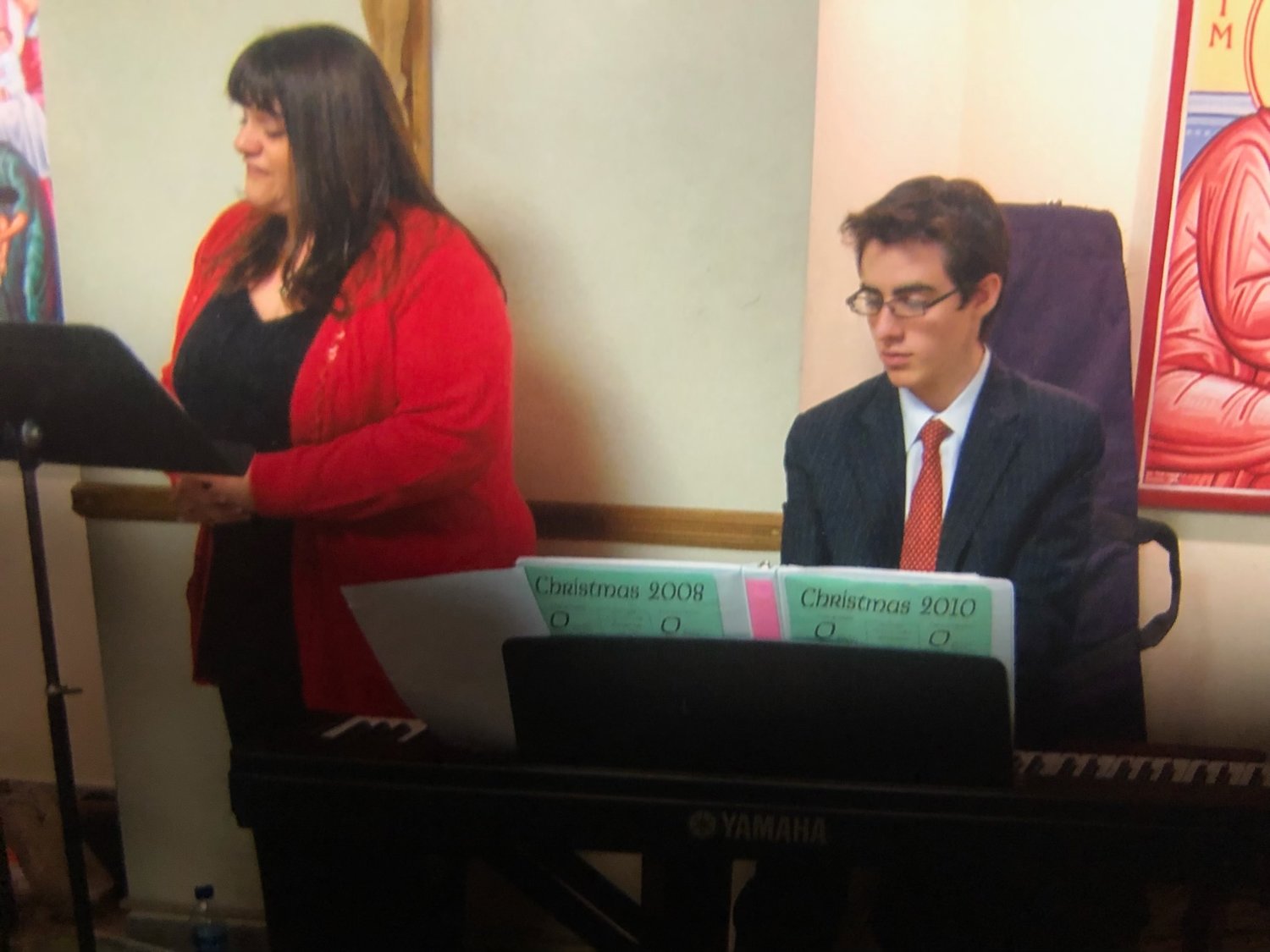 Victoria Sorrentino, who was known as Viki, was all about music. She was a vocal and piano coach for many years, helping local young people pursue music-oriented careers. At the Parish of St. Barnabas the Apostle in North Bellmore, where she was the cantor, her voice was ever present during countless services.

Sorrentino died on Oct. 12, 2020, at age 47, which was a shock to her sister, Nicole. Her sudden death was mourned by family and friends who knew her legacy had to live on in some way.

Nicole, or Niki, started the Viki Sorrentino Foundation with the goal of promoting music education throughout the hamlets and across Long Island. On Sunday, the foundation hosted its first fundraising event at St. Barnabas, in the area where the sisters grew up.

“Viki was always so committed to music — she incorporated music into everything,” Niki said. “Her life is so connected to music.”

Niki described her sister as someone who was always jovial, and who could “capture a room.” She exuded happiness, Niki said, no matter the setting.

Viki taught kindergarten at Grand Avenue Elementary School in North Baldwin. Her classroom featured a piano, which provided a musical background for many of her lessons. Through hymns and songs, she helped her young students learn.

Ben Weiss was a 5-year-old piano student of Viki’s, and 21 years later, he remembers her fondly. “She was incredible,” Weiss, 26, said. “She was my first exposure to someone who wasn’t my father teaching me piano. The optimism is exactly what someone needs when taking piano lessons for the first time.”

Every year, Weiss, who is Jewish, would perform alongside Sorrentino at St. Barnabas. “It was such a fun thing to look forward to,” he said. His family members joined him for the occasions.

Weiss is now a substitute in the Broadway cast of “The Lion King,” and still plays lots of piano — classical, which Viki started him off with, and pop.

Music connected the Sorrentino sisters as well. Niki recounted a landmark moment from their childhood, when Viki held a note on the piano and they both matched it vocally, which led to Niki’s first harmony.

William Dione, the choir director at St. Barnabas, recalled Viki’s start at the church and her growth into a confident adult. She began singing in the choir at 16, and became the cantor at 18. “She had a real gift,” Dione said. “A beautiful voice.”

She was known for her rendition of “Pie Jesu,” which would bring congregants to tears, Dione said. A recording of Viki performing the song was played at her funeral at St. Barnabas. “A lot of people weren’t expecting it,” Dione said, “but people needed it to remember her by.”

At the event on Sunday, a bench at the northeast intersection of Bedford Avenue and Delamore Way was dedicated in Sorrentino’s honor. It now displays her name. Dozens of friends and family were also in attendance.

Following the dedication, there was a special show at the Loft at the Bellmore Playhouse. “A Journey to the Past” featured clips of Sorrentino’s most memorable musical moments, and performances by friends, including Weiss. Several area businesses donated goods for raffles and prizes.

The first award given out by the Viki Sorrentino Foundation will be a grant to a music or music education student at LIU Post, where she attended college. An annual scholarship may be created, but the plans are still preliminary.

Her sister said she hoped to make the fundraiser an annual tradition. “We want to help a person get their dream,” Niki said.