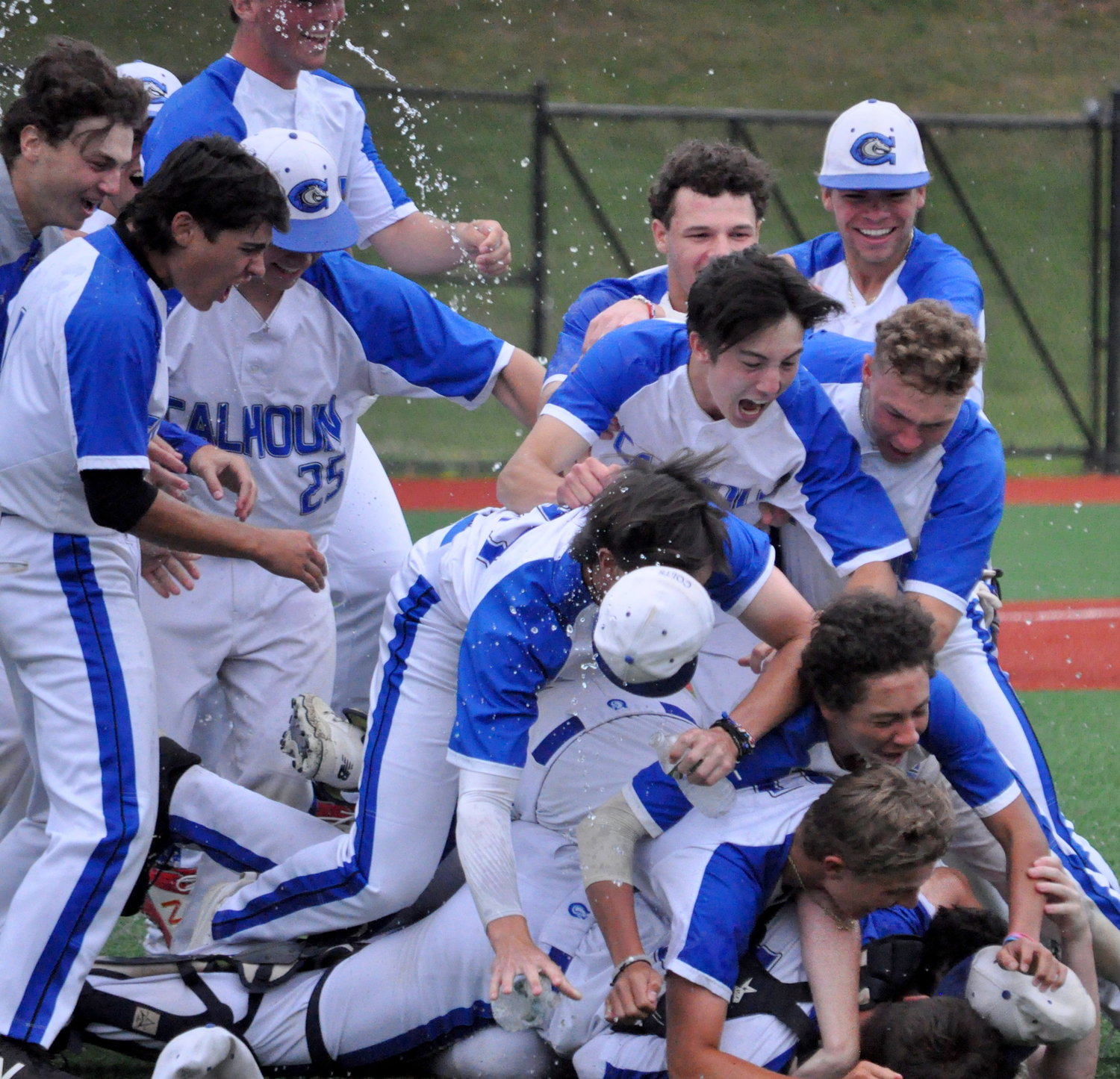 Calhoun celebrated its first county baseball title since 2012 on Wednesday after beating Clarke, 12-6, in Game 3 of the Class A championship series.
Tony Bellissimo/Herald
By Tony Bellissimo

Facing elimination for the fourth time in a week and trailing Clarke by two runs before swinging a bat in Wednesday’s decisive Game 3 of the Nassau Class A baseball championship series, Calhoun put together one of its biggest innings of the season at the perfect time.

The top-seeded Colts exploded for nine runs on seven hits in the bottom of the second and never looked back on the way to capturing their first county title since 2012 with a 12-6 victory at Farmingdale State College. Senior Alec Edwards singled twice in the inning and drove in a pair of runs, seniors Brian Chin and Andrew Schneir both had two-run hits, and junior Charlie Imhof scored twice and drove in a run.

“We’re a brotherhood and always have each other’s backs,” said junior Matt Kalfas, who raked at the plate in Calhoun’s two finals wins going 6-for-7. “This team has a lot of character,” he added. “We were behind in both series, the semifinals and finals, and just stayed confident and focused.”

Junior PJ Kakalos pitched the last 2 1/3 innings in relief of senior starter Dan Bondi for Calhoun (24-3), which meets Rocky Point for the Long Island Class A championship on Saturday at 4 p.m. at St. Joseph’s College in Patchogue.

“It’s an unbelievable accomplishment,” Colts coach Art Canestro said. “Nassau Class A is the toughest bracket there is and we had to battle back from a game down in the semifinals [against Division] and against Clarke.

“We’re a team that’s capable of a big inning at any time,” he added. “We showed again today our lineup isn’t just a couple of guys, it’s all nine.”

Fourth-seeded Clarke, which had a comeback for the ages against MacArthur in Game 2 of the semifinals with a five-run rally in the bottom of the seventh to keep its season alive, finished 22-7-1.

Calhoun took Game 2 on Memorial Day, 6-2, thanks to three-run rallies in the top of the fifth and seventh innings. With the Colts clinging to a one-run lead entering the seventh, Schneir provided the insurance with a three-run homer off the foul pole in left field.

Calhoun senior Shane Linett pitched well into the bottom of the fifth and was lifted for Kakalos with the bases loaded. The Rams pushed across two runs, both charged to Linett, but left a pair of runners on base.

Clarke came out swinging in Game 3 and pushed across two runs in the top of the first on RBI singles by sophomore Giancarlo Rengifo and junior Zaim Deljanin.

But the Rams’ lead quickly evaporated.

It was still 2-0 with two outs and Imhof on second base in the bottom of the second when the onslaught began. Edwards singled home Imhof and then scored the tying run on junior Jordon Babbo’s single. The first of five Clarke errors kept the inning alive, and so did Kalfas by beating out an infield grounder to load the bases. Chin then fouled off several tough pitches before delivering the go-ahead hit up the middle for a 4-2 lead.