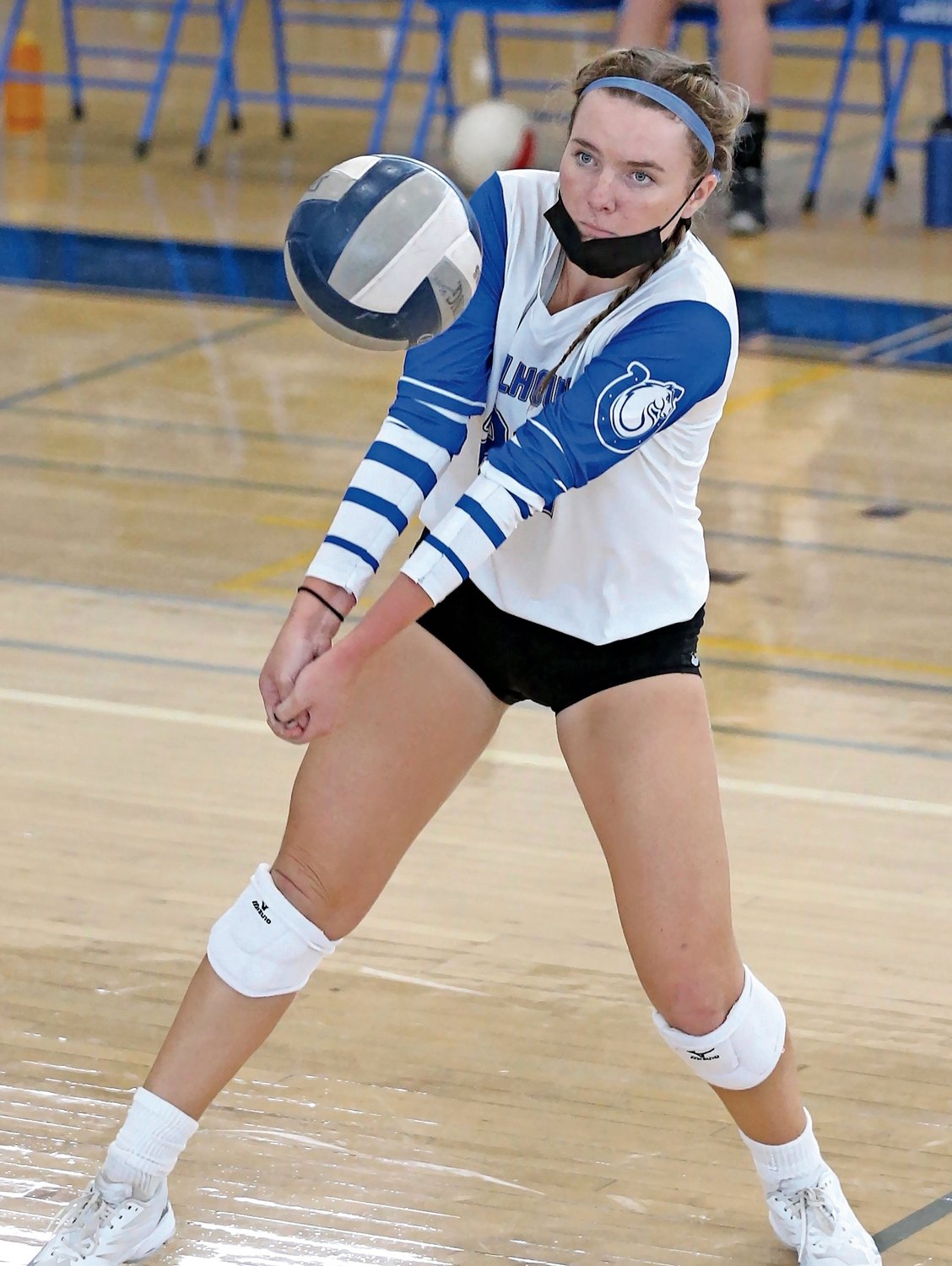 Junior libero Ella Maldonado is one of many reasons the Colts are off to a flying start with a 5-1 record.
Jeff Wilson/Herald
By Garrett D. Uribe

Second-year Calhoun girls’ volleyball coach Christina Strezenec saw the sign she’d been awaiting at an early September tournament.
With still-fresh scars after losing to eventual county champion Wantagh in last season’s Nassau Class A quarterfinals, the Colts were again on the point of falling to their nemesis at the Wantagh Invitational. From seven points down, the Colts would rally and steal the set from the Warriors – getting the latest last laugh in what has become a perpetual grudge match.
But more important, said Strezenec – whose first-place team is 5-1 in Conference A/C2, 5-2 overall – the Colts’ comeback was feisty proof that the club, which finished second last season in Conference A2, was ready to become a pacesetter.
“In that one set, they were able to take the next step,” Strezenec said. “It’s weird, because (last season) wasn’t that long ago, but they matured an incredible amount in a short time. They know now how competitive they can be together. At a certain point, they kind of said, ‘Wow, we’re in this, and we’re going to step up.’”
Before stumbling 3-0 against host Manhasset on Oct. 2, Calhoun had dropped only two sets across a five straight wins in conference – a blistering fortnight spree that started with a shutout win at Garden City, and culminated Sept. 29 with a 3-1 win at home against Lynbrook. The latter match saw season highs from junior Julia Lawrence, who blasted 21 kills, and sophomore Gianna Lucchi, who fired 12 of her conference-leading 31 aces against the Owls.


“Julia Lawrence is the heart of our offense,” Strezenec said of the Honorable Mention All-County outside hitter, whose 108 kills are second-most in Nassau. “The girls know if they give Julia the ball, she’s going to put it away. Gianna’s a just positive light, with lots of natural athleticism. That’s important for a setter, because you’re interacting with both offense and defense.”
All-County junior Ella Maldonado, a team co-captain with Lawrence, continues to burnish her considerable resume at libero, with 136 digs to rank second in Nassau, while junior middle blocker Victoria Zovich has a second-leading 31 blocks in A/C2 (fourth in Nassau). “Ella’s been tremendous,” Strezenec said. “She has risen as a leader for us, which is helpful after losing lots of seniors. Tori’s become a tremendous server. Her energy changes the whole team dynamic.”
Chiefly reserved for spot starts, sophomore setter Olivia Katz has made a strong case in part-time appearances, leading the Colts with 122 assists (fifth in A/C2). “Olivia’s done a really good job filling in,” Strezenec said. “She comes in with an aggressive serve and is a really good asset as a setter.”
The Colts get a chance at proper vengeance when they travel to second-place Wantagh (4-2) Oct. 7. “We’re all looking forward to that match,” Strezenec said. “As long as everyone stays focused, I think we’ll do better than last year. I’m excited to see how far we take this.”