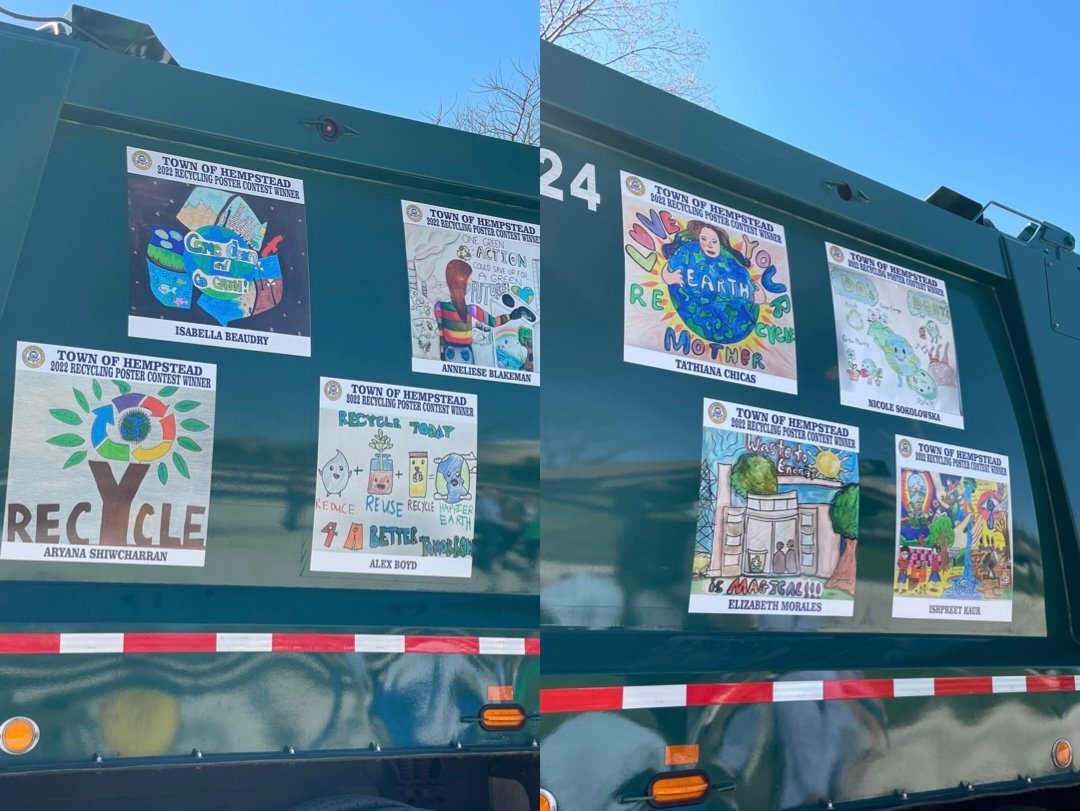 The winners of the Town of Hempstead’s 2022 Recycling Poster Contest will be displayed on town recycling trucks.
Jordan Vallone/Herald 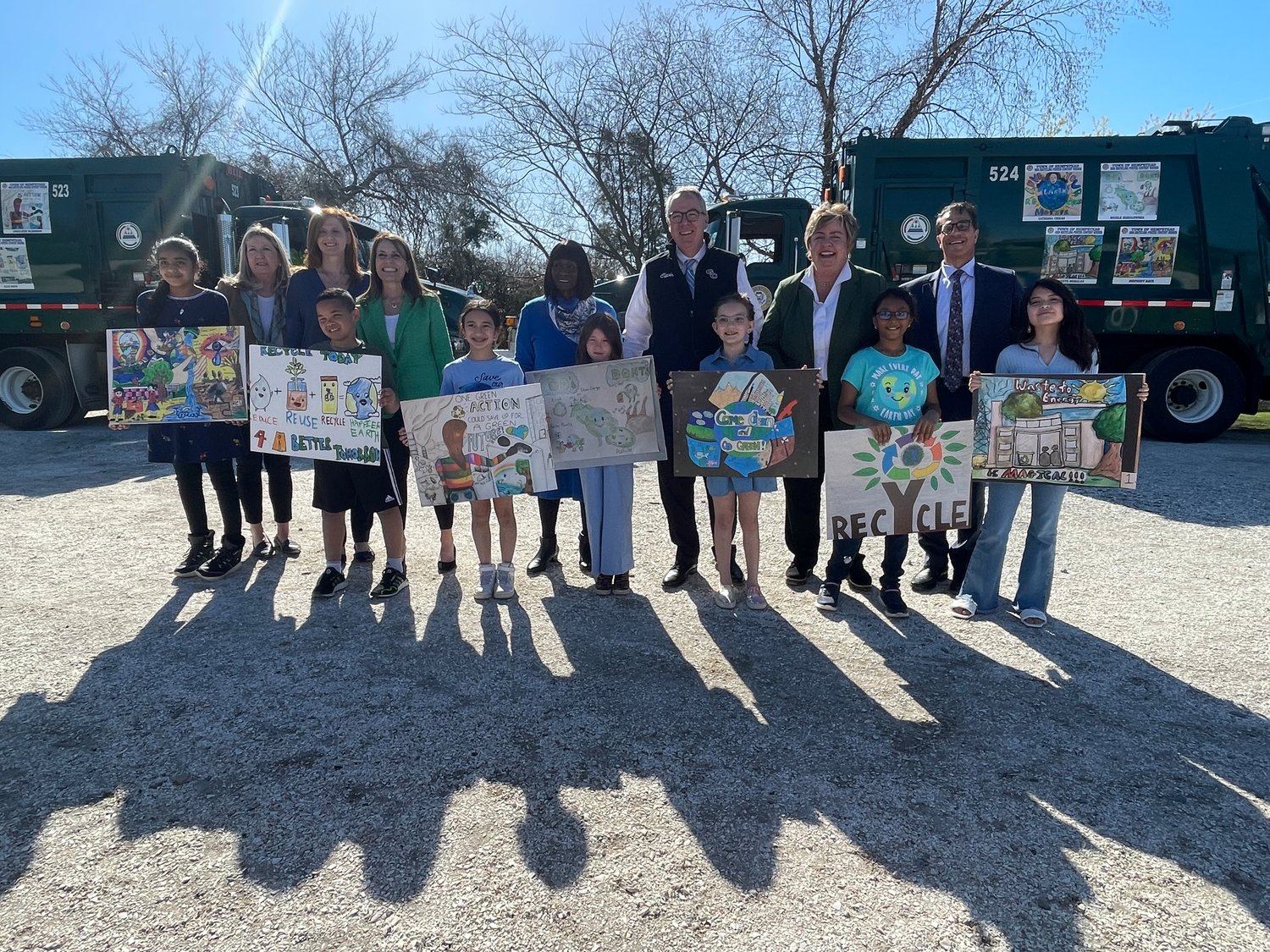 Each year, the town, in conjunction with Covanta Energy, holds an Earth Day-themed poster contest. The winners, above, with members of the Town Board and Covanta Energy representatives, were honored last Friday at the Norman J. Levy Park and Preserve.
Jordan Vallone/Herald 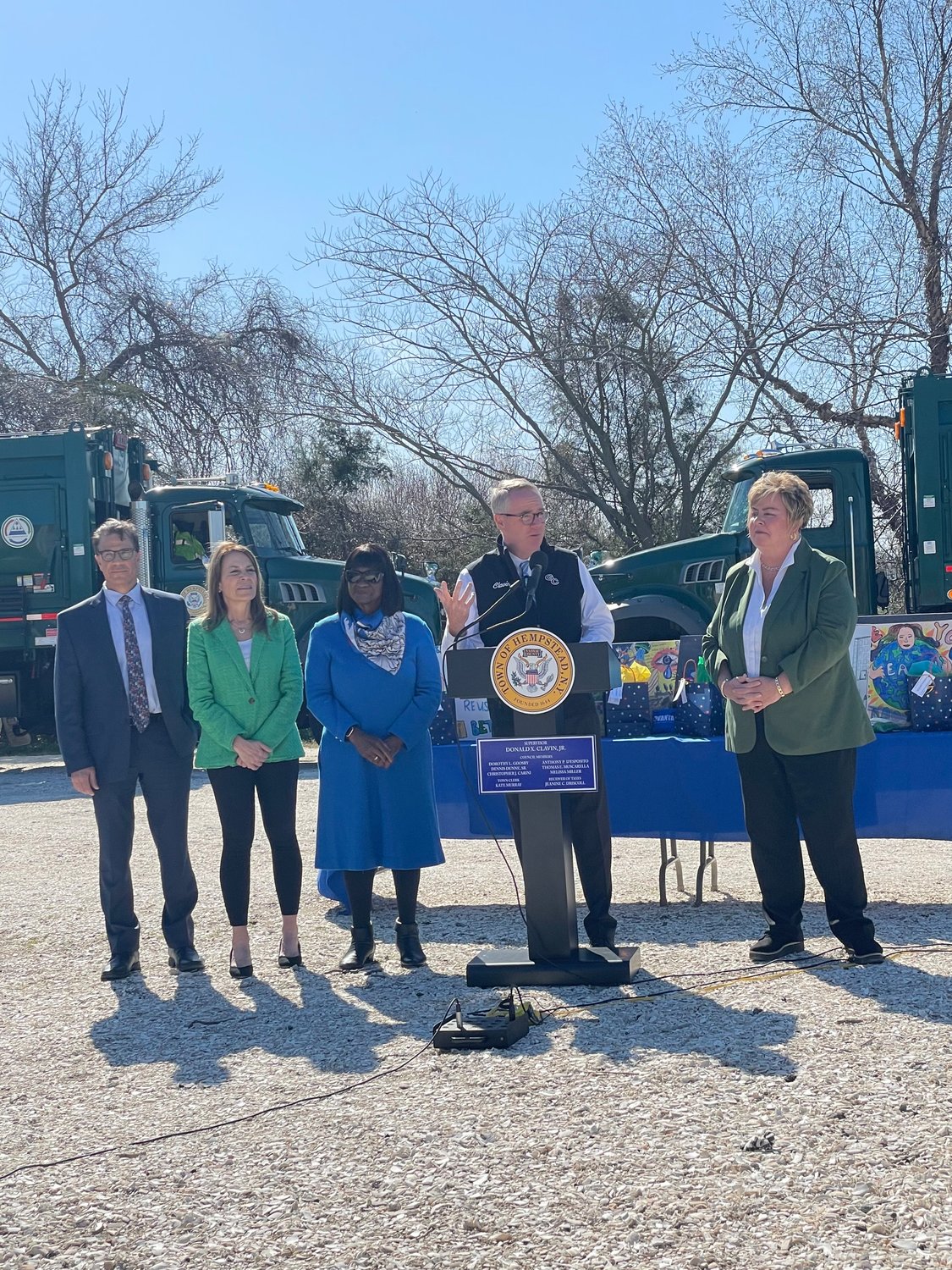 At the ceremony, Town Supervisor Don Clavin spoke about the importance of recycling.
Jordan Vallone/Herald 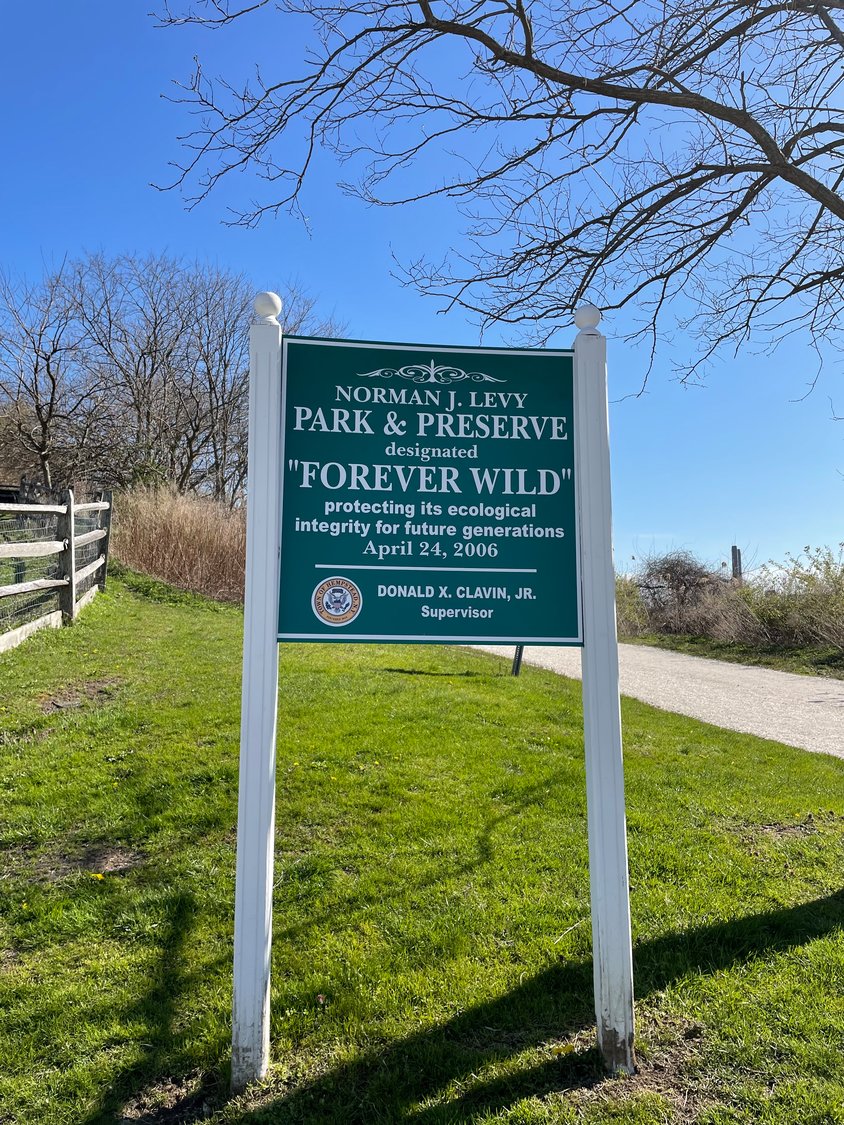 The Norman J. Levy Park and Preserve is the town’s proudest example of recycling. A former landfill, it boasts walking paths, fishing piers, kayak launches and panoramic views of Long Island and Manhattan from the hill’s summit.
Jordan Vallone/Herald
Previous Next

Our environment is such a priority for all of us.”
Don Clavin, Town Supervisor
Who were the winners?

The Town of Hempstead honored eight elementary school students last Friday for their submissions in the 2022 Recycling Poster Contest:

There was no better place to celebrate Earth Day, and honor young artists from across the Town of Hempstead, then Norman J. Levy Park and Preserve.

Last Friday, town officials, elementary school students and their parents gathered at the Merrick park to congratulate the eight winners of the town’s 2022 Recycling Poster Contest, held in partnership with Covanta Energy.

Levy Park, off Merrick Road and tucked behind the town’s sanitation facilities, is the epitome of recycling. The landfill-turned-preserve, colloquially known as “Merrick Mountain,” boasts the highest summit on Long Island’s South Shore, and offers nature enthusiasts and hikers panoramic views that stretch far beyond Bellmore-Merrick.

This year the town selected eight winning posters from hundreds of submissions by elementary school students. “We had more submissions this year than we’ve ever received in the history of this program,” Town Supervisor Don Clavin noted at the ceremony.

The honored students received gift bags and certificates, and their artwork was plastered on two recycling trucks that served as a backdrop for the ceremony, adjacent to Levy Park’s amphitheater. The trucks will be used for recycling pickups across the town for the remainder of the year.

“We want more people to see your artwork,” Clavin told the crowd. “We’re taking your message on the road — 1,200 miles of roadway here in the Town of Hempstead runs from Elmont all the way up to Seaford.”

Covanta Energy representatives who attended the ceremony thanked the town and the students for their contributions. “I’m delighted to again collaborate with the Town of Hempstead, and thank all the students for their participation, and the parents for supporting this,” Covanta community affairs specialist Maureen Early said. “This has been, as the supervisor said, a great year, with so many great submissions.”

“For all the winners, you should really pat yourself on the back,” Clavin added. “You really stood above and beyond the others.”

The supervisor made note of the park’s history. “When we would drive by this place, this was really just a giant mound of garbage,” he recounted of his youth. “Somebody had a vision to transform this into a beautiful nature preserve here.”

Named after a longtime Merrick resident and environmental advocate, State Sen. Norman J. Levy, the park has been open since 2000. “If you have time, go for a walk or come back tomorrow, and take a walk on the trails,” Clavin said. “Go put your kayak in the water, because you can do that — and if you like to fish, there’s a beautiful fishing pier.”

One of the park’s most popular attractions are Nigerian dwarf goats, which, during the day, are kept in a small pen at the entrance of the park. At night, however, they are released, and serve as a natural form of weed control.

Many of the park’s improvements, including the goats and the fishing piers, were overseen by former town supervisor and current Town Clerk Kate Murray and Senior Councilwoman Dorothy Goosby, both of whom attended the ceremony.

“Our environment is such a priority for all of us, and recycling is such an important thing to do,” Clavin said. “We’ve changed that mindset — you now see people who really want to take care of the environment.”