L.I. artist brings inspiration to the boardwalk and beyond 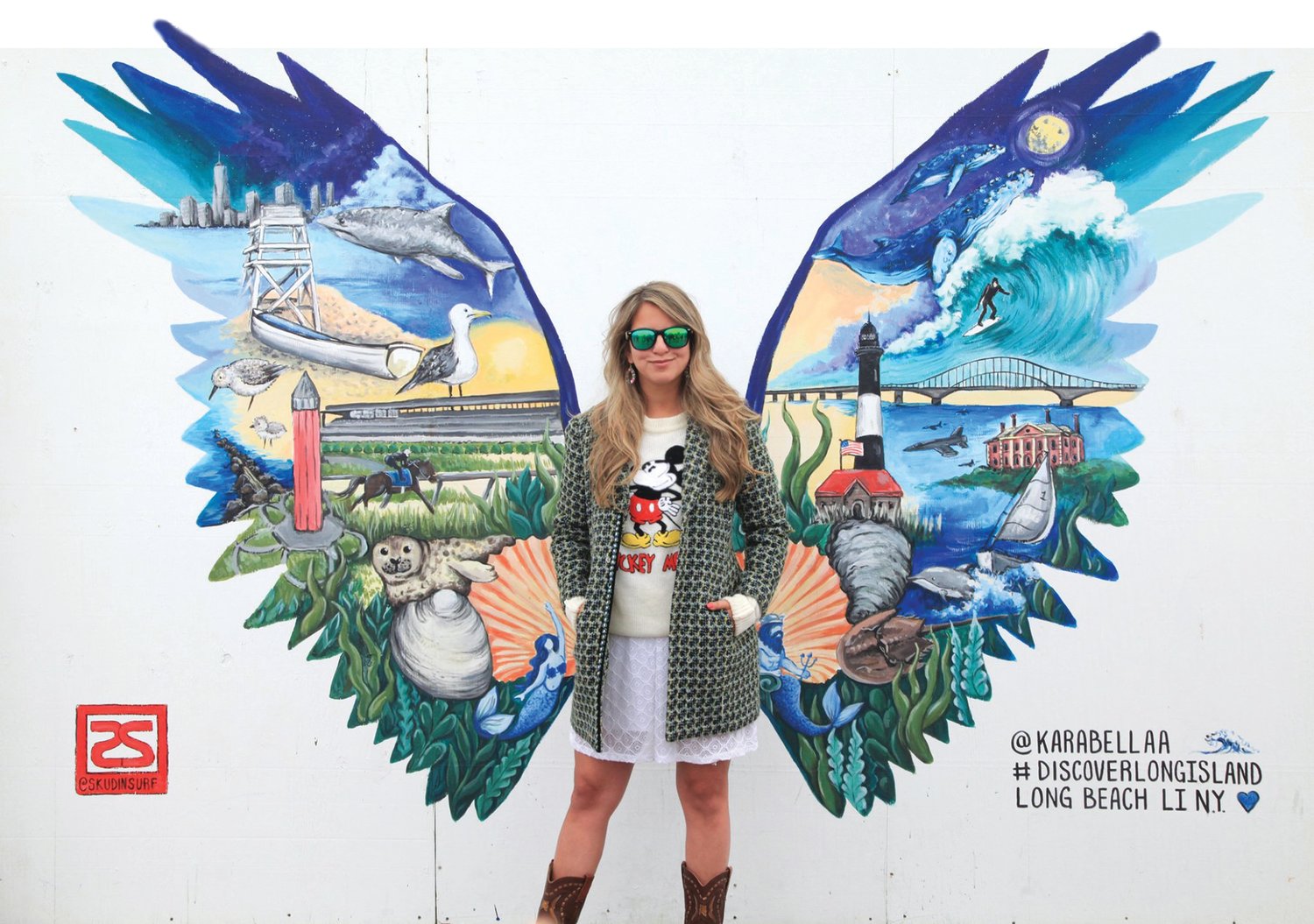 As the sun sets on the Long Beach Boardwalk, an orange and yellow glow coats bicyclists, runners and summer beach-goers. As light drenches Skudin Surf, tourists run over to take a photo with the “Long Beach Osprey Wings,” a mural created by environmental artist Kara Hoblin.

The 8-by-10-foot painting of the official bird of Nassau County is intended to increase foot traffic in the City of Long Beach, which saw business and restaurant closures throughout the pandemic.

The concept was created by Happauge-based Discover Long Island, which aims to further economic development across LI.

“It’s right in the middle of the Boardwalk, so people can come [and] feel inspired by the osprey wings,” Discover Long Island President and CEO, Kristen Reynolds, says.  “This was such an important project for us to create these murals in Port Jeff Village and in Long Beach, where people can walk and explore the downtown, support local business, and discover Long Island.”

Last spring, the organization sought a local artist to complete the sister murals in Nassau and Suffolk counties.

“We had been wanting to team up for a very long time but [an opportunity] never came up,” Hoblin says. “They reached out to me with the idea – it was really their idea to get people out after the pandemic, to return to shopping, towns, local businesses.”

The osprey wings mural was completed in late April and unveiled in May. Inside the wings are popular destinations on the North and South Shores, like Jones Beach in Wantagh, Belmont Racetrack in Elmont, Nassau County Museum of Art in Roslyn and the Fire Island Lighthouse on the Great South Bay.

The concept was originally pitched to Hoblin as a pair of angel wings. While she liked the idea, Hoblin thought the osprey would be more appropriate for Long Island.

“We have an [osprey] nest right near our house, so I see them every single day,” Hoblin says. “They’re a success story, and I felt like they could serve as a huge beacon of hope.”

Ospreys are often considered the “comeback kid” to Long Island environmentalists. According to a New York Times article dated Jan. 1986, New York State deemed the raptor endangered in the mid-70’s after they began to rapidly die off due to the usage of the pesticide DDT on farms.

“The chemicals were causing osprey’s eggshell membranes to be brittle, so that when mother ospreys sat on their babies to hatch, they would break,” Hoblin, who often tackles themes of environmentalism and conservation, explains.

However, once DDT was banned, the population increased. According to a research paper published by The Raptor Research Foundation in 2014, osprey populations have expanded from eastern to western Long Island. In Connecticut, ospreys now occupy the coastline and are nesting inland.

With some assistance from the Skudin family, the exterior wall was created, and Hoblin got to work. Since creating the outdoor mural was weather-dependent, it took roughly two weeks to complete. Had there been perfect weather? “I probably would have finished in about a week,” she says.

Cliff Skudin, co-owner of Skudin Surf, says the mural is centrally located and promotes the Boardwalk as an attraction for both tourists and locals.

“To me, you know, it’s a symbol of us coming out of the pandemic,” Skudin says. “I almost look at it as finding your wings.”

The Skudin family helped to fight the coronavirus pandemic beginning March 2020, when the Skudin Surf Club set up a space on Riverside Boulevard to distribute foot packages to those in need.

‘They’re so integrated into the community and they really wanted to be a part of this, and bring positivity and hope back to the Boardwalk, to the community,” Hoblin says of the Skudins.

Hoblin says she hopes the mural offers a sense of hope to community members following a difficult year caused by the Covid-19 pandemic — and inspires residents to visit new areas of the Island and explore their own communities.

“I think the wings are a great way to get people outside, get on the boardwalk,” she says. “Big, outdoor murals are a way for people to connect with art in a way that’s accessible.”

Kara Hoblin works across media as a commercial and fine artist. Much of her detailed work focuses on environmental conservation. She can be found on
Instagram @KaraBellaa.

This story appeared in the Summer 2021 issue of Long Beach Magazine.

Much more than sports: Mike Kruter is the Wantagh Chamber’s 2021 Businessperson of the Year