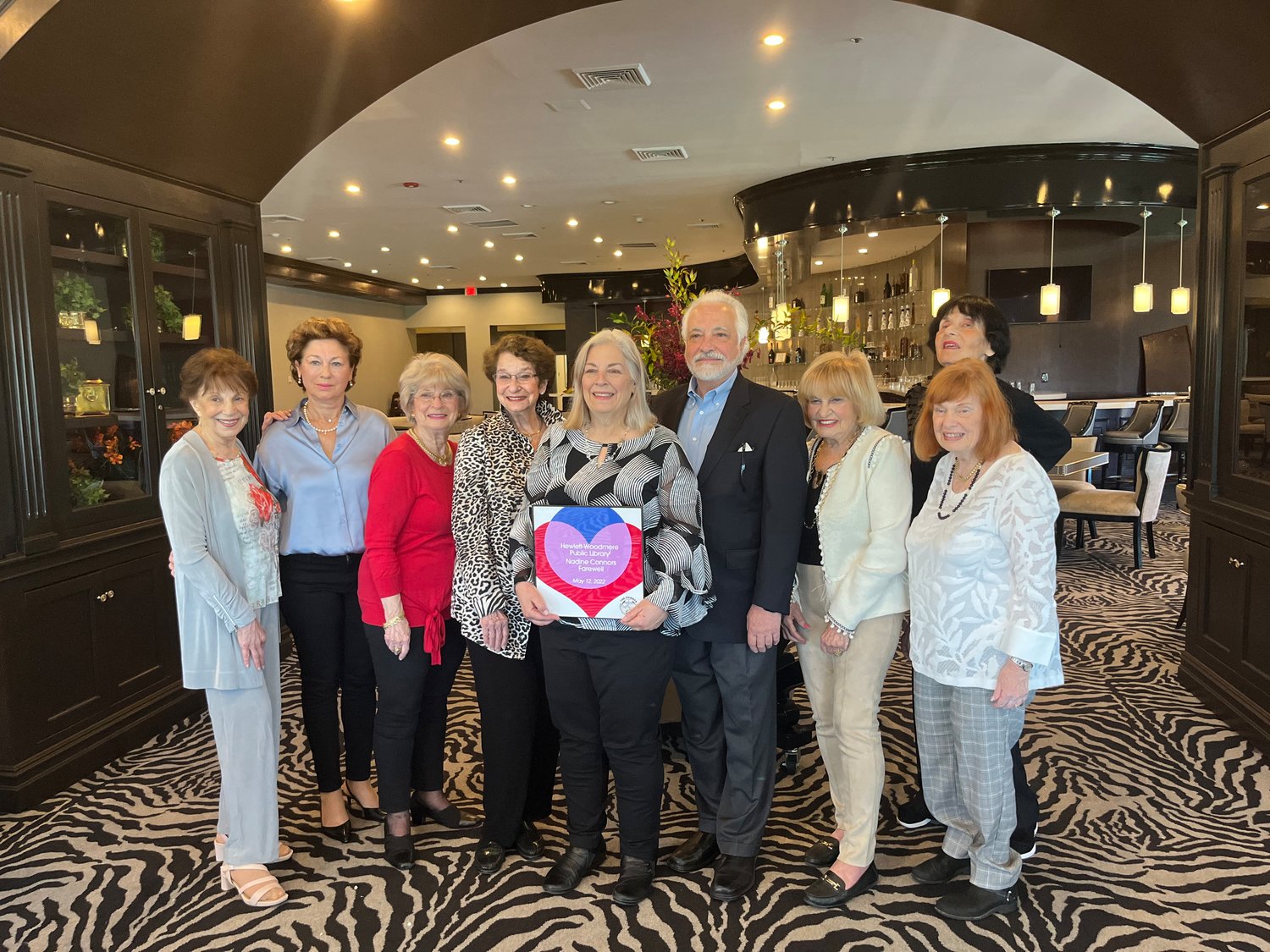 The Friends of the Library at Hewlett Woodmere Public Library celebrated the retirement of Nadine Connors, with plaque, after 22 years as the cultural program specialist.
Lisa Margaria/Herald
By Lisa Margaria

The two were already acquainted as their daughters were friends in the Port Washington School District, where Connors was on the Cultural Arts Committee.

Connors wanted to find a career for her background — partially from being on the Cultural Arts Committee — in music and theater, which is why DeSciora guided her to HWPL.

Three years later, when the test was offered, Connors took it, interviewed for the position and got the job. She then preceded to go above and beyond the typical duties of the job description.

Connors began by developing Gold Hall, a new addition to the library. She brought brand new art and music programs to the community. She did not repeat a single program during her first three years.

She also developed relationships with people and organizations in the community, such as the National Council of Jewish Women’s Peninsula Section, the Five Towns Indian Association and the HWPL’s Friends of the Library.
Especially involved in Friends of the Library — a volunteer group that supports the library — she handles a lot of planning, programming and billing for the group. “

Nadine has a wonderful ear for musical programs so we’ve had some terrific programs,” Friends President Irene Levy said. With Connors is retiring, “they will hire somebody else who will do the job,” Levy added, “but will they do it with as much efficiency [and] taste as she does? I don’t know.”

Connors also wrote for the library’s quarterly newsletter, Overleaf, growing it from at least six pages to 12 pages. She also learned grant writing — not a typical duty in her role — obtaining money for special, program-focused funds and opportunities.

Of the hundreds of grants that Connors wrote, the most significant was for the Pagemasters founded by Connors in 2015. It is a weekly reading and social program for challenged adults.

“The grant was supposed to be for ESL support — English as a Second Language,” Connors said, “but I wrote it for developing the Pagemasters.” Though the Pagemasters did not fit the original criteria, Hewlett-Woodmere is one of 16 libraries in the country that received the grant — thanks to Connors.

What will HWPL be missing without Connors? “A workaholic who didn’t know she was one,” Friends Vice President Iris Gorenberg said. “She was honestly involved, so she would come with great enthusiasm and knowledge and set the pace.”

Over the years, while technology developed, Connors adapted so that the library programs could be up to date. She learned to operate sound and lighting systems and new computer software to run programs smoothly.

“It was kind of like — who has to learn this?” Connors said. “Well, I decided I better learn it, because I’m the one who’s going to be standing there when it doesn’t work,” she joked, adding, “I don’t mind being challenged.”

The Friends threw a retirement luncheon for Connors at the Seawane Country Club in Hewlett Harbor on May 17, where they gifted her an Apple watch. “The Friends gave me an apple watch,” she said, “because they’ve always appreciated my ability to do technical things.”

The Friends read aloud heartfelt poems about Connors’ retirement as she raised her eyebrows, looked to the ceiling and wiped below her eyes. “I got makeup on today,” Connor’s said, “this is tough!”

Connors still constantly has so many ideas about library programs and always has “thoughts on the back burner,” she said, “I have things I would love to do here [at HWPL] now — but we can’t.” Connors said, adding, “I keep thinking,” Connor’s said about her retirement, “is it really happening?”