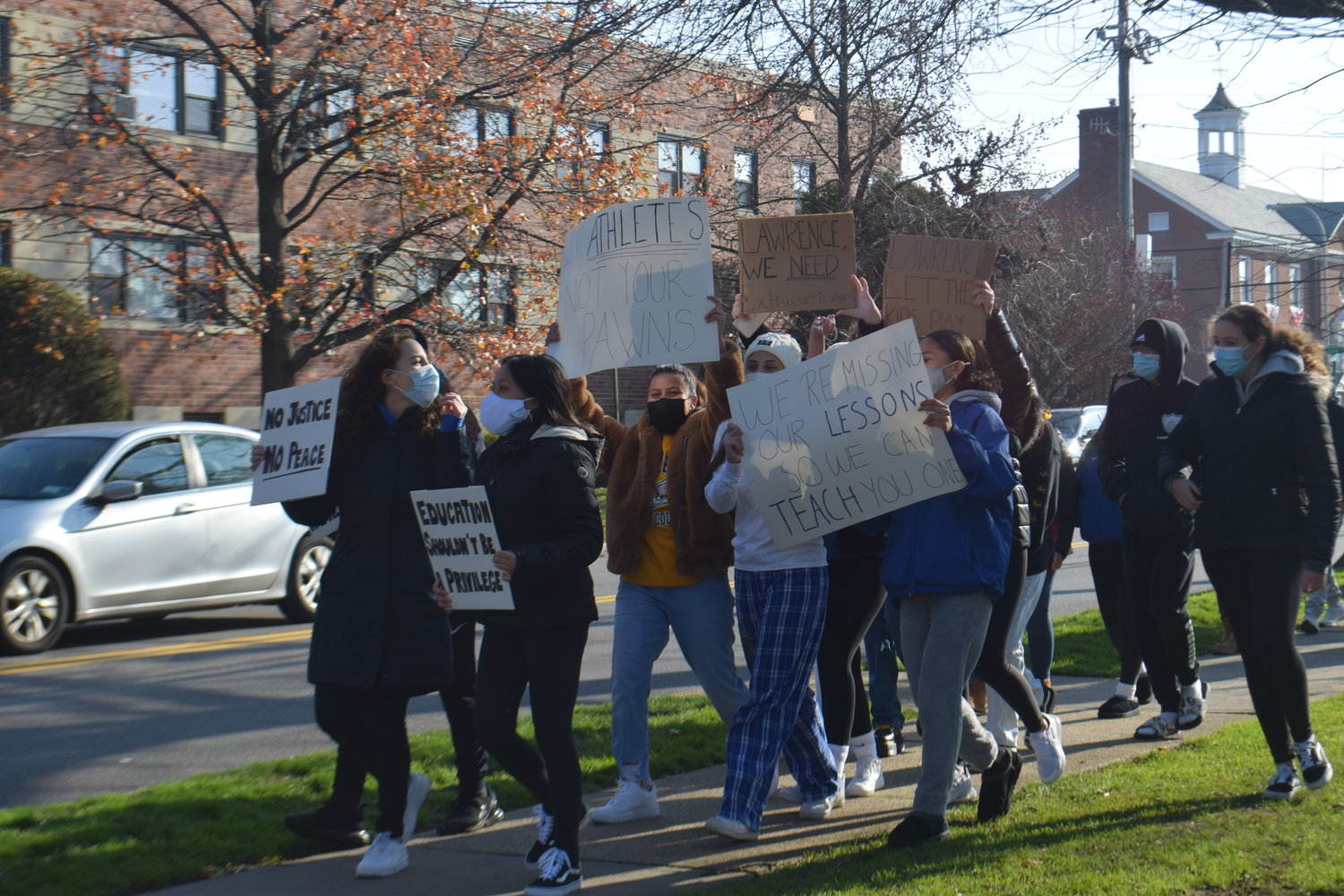 Lawrence High School students protested the loss of two sports seasons and not having virtual clubs as they marched along Cedarhurst Avenue in Cedarhurst on Dec. 11.
Jeffrey Bessen/Herald 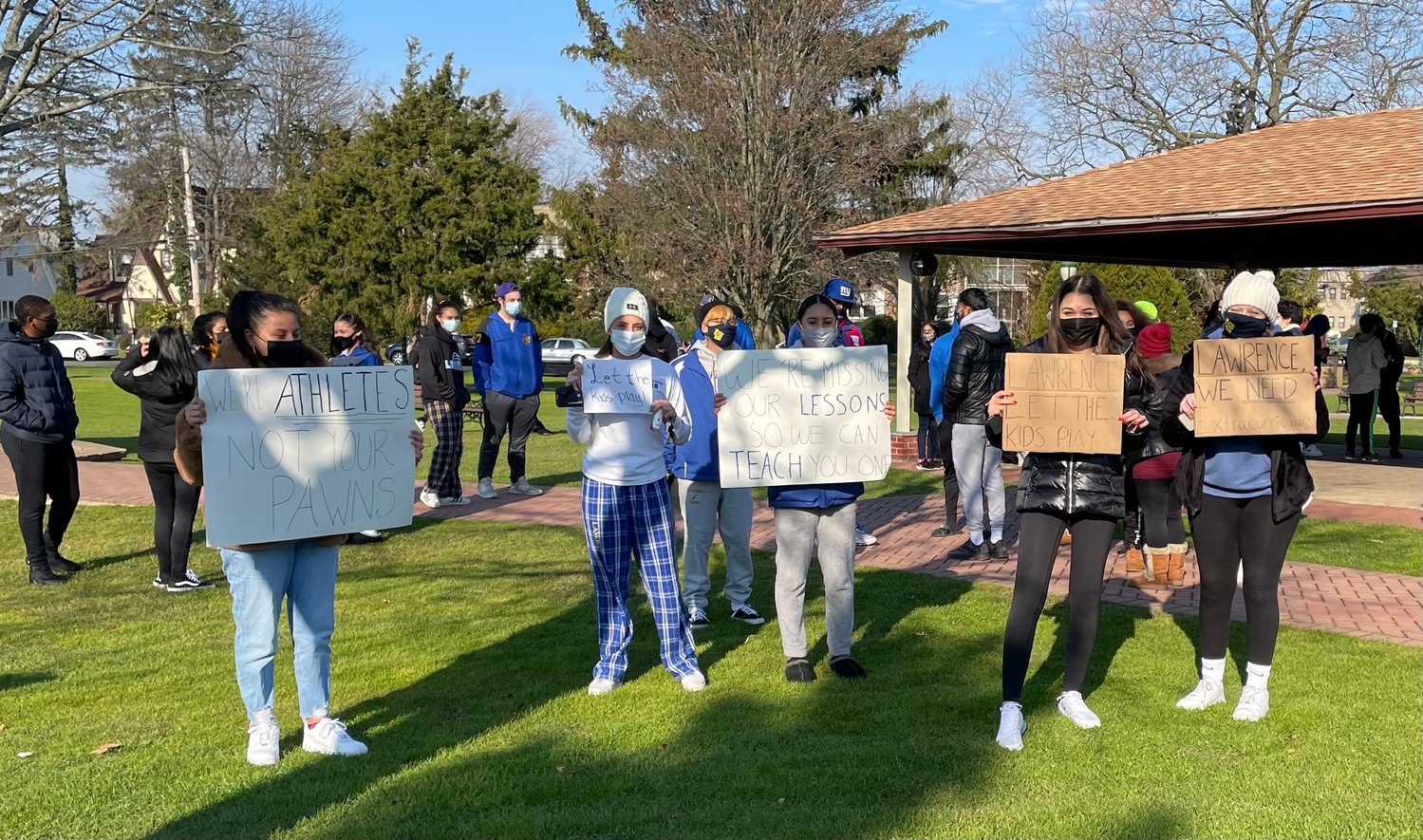 With placards in hand, Lawrence High students explained their plight at Cedarhurst Park on Dec. 11.
Jeffrey Bessen/Herald
Previous Next
By Jeff Bessen

Roughly 40 Lawrence High School students gathered by the pavilion in Andrew J. Parise Cedarhurst Park on Dec. 11 to protest the school district’s cancelation of fall sports and the running of winter track, along with not having virtual clubs.

The students held placards that read “Lawrence, we need extracurriculars,” Lawrence, let the kids play,” and as the student “cut” classes on Friday, “We’re missing our lessons so we can teach you,” and other slogans with similar sentiments. The students marched up Cedarhurst Avenue to the high school as they chanted, "Let the kids play."

Earlier in the week is was revealed that the school district was going to officially cancel the varsity fall sports program, after already canceling the middle school athletic program because of the coronavirus pandemic.

Now with a spike in Covid-19 cases countywide, and nationally, district officials said that the fall sports season is canceled and Lawrence will not run its winter track program, the only “low risk” sport it has. Bowling, gymnastics and track are considered low risk by the state, while winter sports basketball and wresting are considered “high risk” for contracting Covid. Spring sports remain a possibility, officials said.

Lawrence High senior Daniella Andrade was one of the organizers of the protest. “Today is really just a message to the Board of Education how they have just been very unjust to the students of Lawrence High School and they are not serving our community.  It seems like their means are serving the community around us but not directly the students attending our high school.”

Andrade said that the district is shortchanging the students by using money to repair the school building to make them more attractive potential buyers citing the previous sale of the Number Six School and the leasing of the Number Five School as examples of the district being sold off.

“Another main problem we are having right now is in the beginning of the year in September, we are one of the only school districts on Long Island that don’t even offer virtual activities,” she said. “I understand that we want to maintain our students to be safe, however you don’t Covid over the computer.”

Golden Tornado basketball player Don Smalls III attended the rally to as he said, “get justice for our school.” He now has lost out on his two sports season: volleyball and hoops. “Sports is huge thing in Lawrence,” Smalls said. “Through these hard times we need sports. Like one of my classmates said, ‘the light at the end of the tunnel.’”

Mikhael HenryHe also noted that it is “heartbreaking” not just for him, a junior, but for the seniors who are looking to make an impression on college recruiters. “My teammate, he’s a senior, he’s an amazing basketball player and this is his opportunity to have college scouts looking at him. We can’t do that because they are trying to take our season away from us and we can’t any footage to send to colleges.”

Madison Ramos, is a junior who looked forward to her volleyball and softball seasons. “Lawrence has taken away opportunities form kids and just knowing that they took the easy way out instead of actually pushing and showing the kids that they actually care about us and trying,” she said. “Instead they used Covid -19 as an excuse in not wanting to wait later in the season to really know if we could have a season or not.”

Ramos also said that the district not only gave up on the kids, but they also gave up on the families who worked hard to help their children possibly have an opportunity to attend college through sports.

What was considered a possibility became reality on Dec. 11 as the New York State Public High School Athletic Association  announced the cancelation of all 2021 winter state championships and the postponement of all high-risk sports until authorization is granted by state officials. The decision was made with input from association  members and the 11 section executive directors, association officials said.

Scaring up a sweet ghoul time in Lawrence