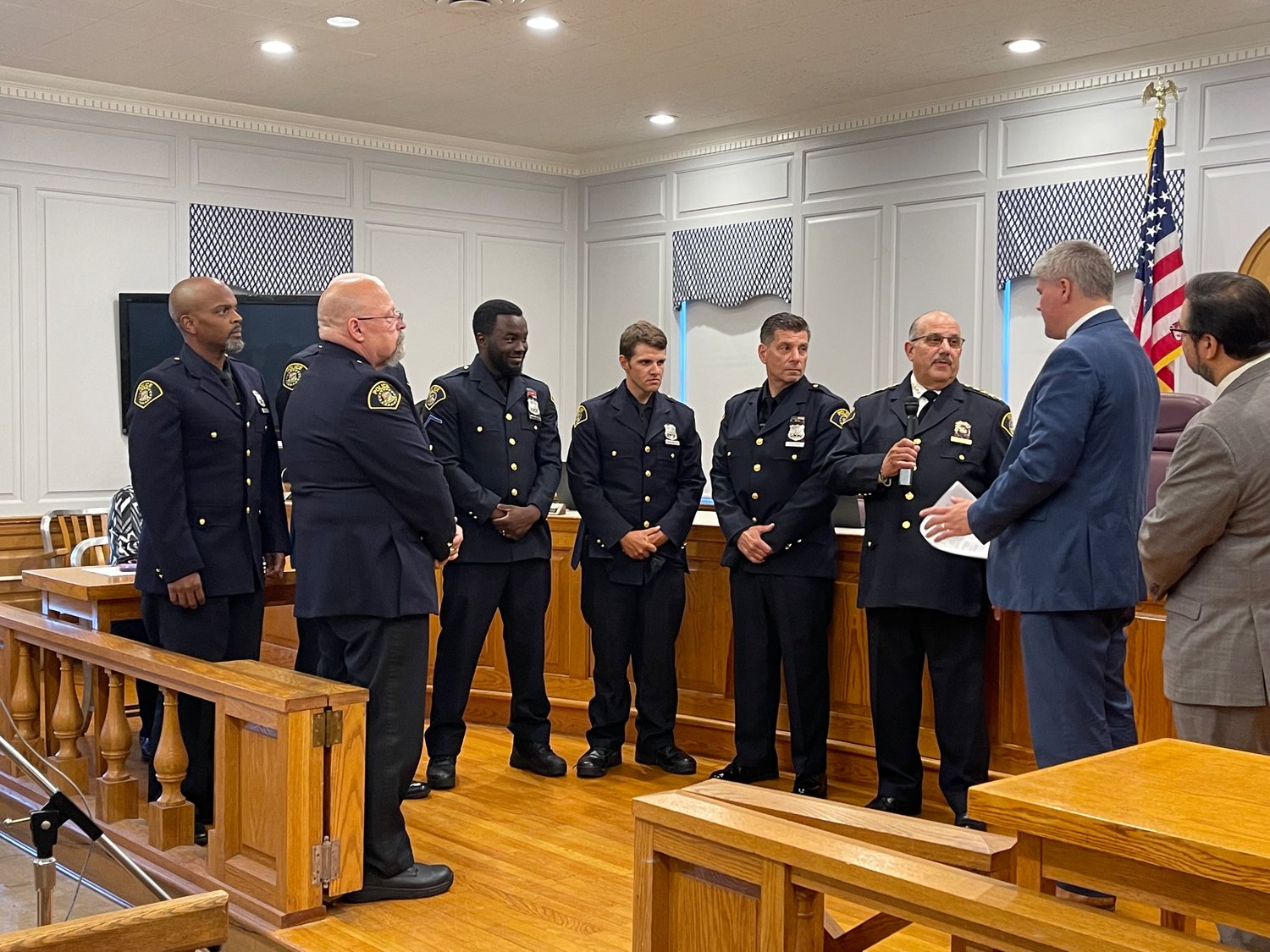 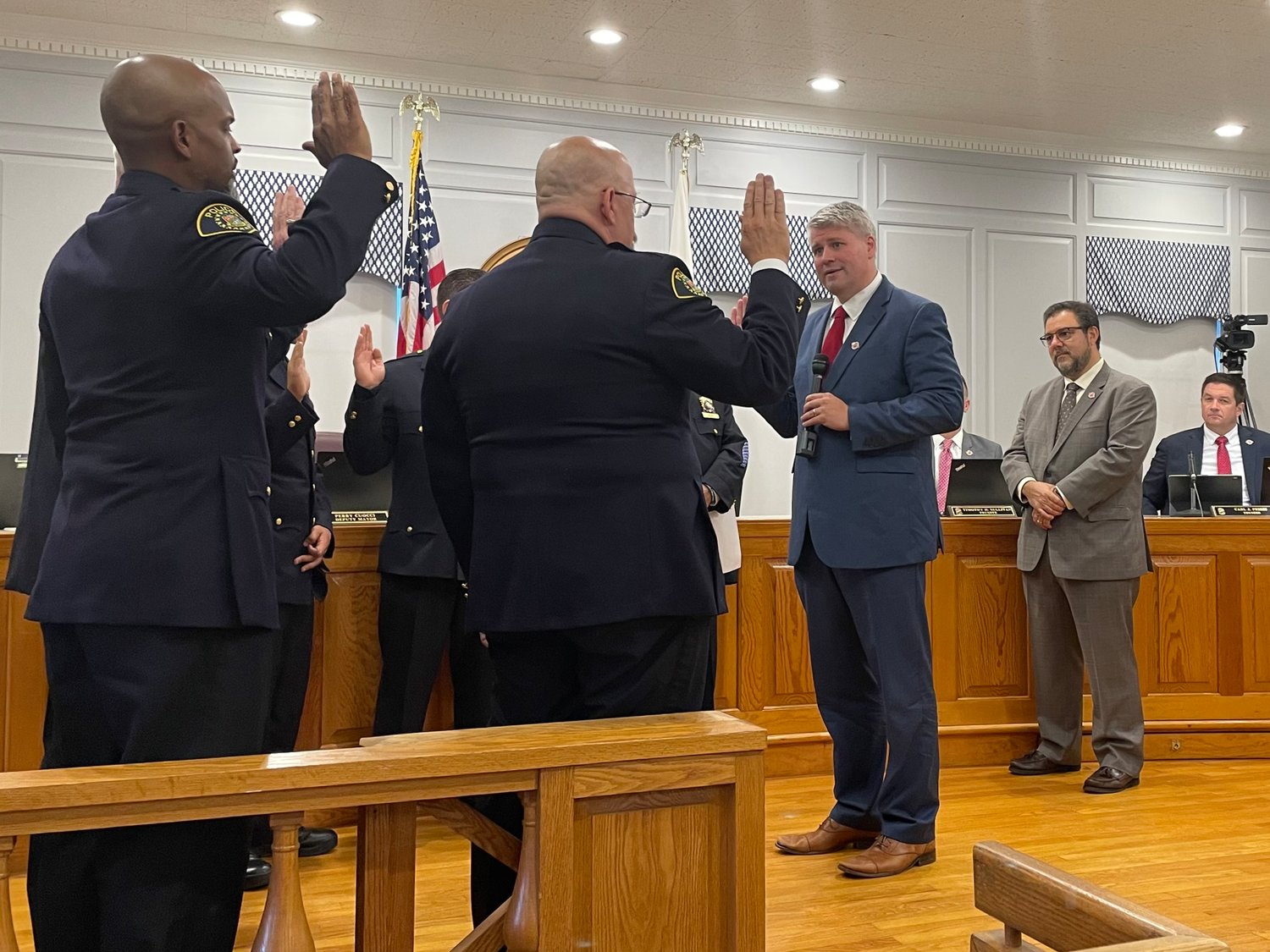 Four new officers were sworn into the Malverne Police Reserve at the village’s monthly board of trustees meeting on Aug. 3, bolstering the volunteer force to 35 members to help keep the community safe.

Hassan Raja, Chris Spence, Frank Vicari and Norton Wallmuller have completed their training and joined the reserve force as officers. In addition, three members of the police reserve rose in rank: An-drew Chernoff was promoted to lieutenant, Jack McCarren to sergeant and Brian Thompson to patrolman first class, at the meeting.

Spence, a Malverne resident since 2004, spoke about his decision to join the force. “I was first involved in coaching youth sports when my kids were playing youth sports,” he said. “When they graduated, I wanted to find another way to stay involved in the community.”

Raja, a Brooklyn native who now lives in Oceanside, said, “I’ve always been one to participate in community service events starting in high school. I used to go to events with a community outreach club back when I lived in Brooklyn. I realized how fun it was and how you get to grow as an individual.”

Through these programs, Raja said, he was drawn to the police reserves. “I realized that the Police Department has a volunteer department where you get to come and help out, be the eyes and ears of police officers, as well as getting to know the neighborhood,” he said.

Spence described how the training works, initially pairing a reserve member with a senior officer, which is called a shadowing program. The curriculum is developed by the reserve program’s chief and senior officers and then reviewed by the Malverne Police Department.

Raja said that a large part of his experience as an incoming reserve was familiarizing himself with Malverne. “I went around and got a feel for the town,” he said. “I got to know the roads. Then it came down to procedure with the type of things a reserve officer would look for, the type of places to check for. The do’s and don’ts as well because we’re also trying to stay as safe as possible.”

Once trainees have completed their requisite items, the senior officer overseeing them will recommend them to the chief for full reserve duty.

Covid restrictions did have some impact on the training period, they said. “There were times when we had to manage the number of interactions in our headquarters because you could only have ‘X’ number of people in a confined space,” said Spence.

Spence said monitoring community events is a major part of the reservists’ job.

“There was a slowdown of community events,” he said. “But once it was safe and the mayor decided in conjunction with Nassau County that it was okay to start having those events again, we’ve had an opportunity to serve in a more public capacity.”

Andrew Chernoff, who joined the force four years ago and was promoted to lieutenant at the swearing in ceremony, discussed the work the police reserves do.

“Last year I did 70 tours,” Chernoff said. “A tour is an event, let’s say, like court night, helping people in court, explaining where they have to go and finding the files for them. Saturday there’s a concert going on at the farm, so we have police reserves there.”

Malverne Mayor Keith Corbett commended the reserves for their strong recruitment ability. “I’ve been through many municipalities throughout the state and across Long Island, and a lot of those municipalities are having issues with retaining volunteers,” the mayor said.

Robert Oliva, chief of the Malverne Police Reserve, said the recruitment process has its ups and downs. “It varies,” Oliva said. “I have an application in now that I’m waiting to get approved by the police department chief. Sometimes it comes in spurts, where you can get two or three at a time. Sometimes we can go on for six or eight months with nobody.”

“It’s really word of mouth,” said Lt. Chernoff. “The volunteers come to us most of the time. We’ll be someplace and meet people and sometimes we’ll say, ‘You know, maybe you want to be involved with us.’”

Both Corbett and Chernoff credited the volunteer group’s success to Chief Oliva. “It’s a testament to you, Bob, that you can still recruit,” said Corbett. “We have the largest crew we’ve ever had. Thirty-five police reserve officers volunteer and come in to assist us in this village.”

“The police reserve is an organization which is, of course, very successful because of our chief, Bob Oliva,” said Chernoff. “He is an amazing chief. He is a great leader for us. He’s exemplary. That’s probably what makes me so willing to give them as much time and energy as I do.”

It’s spooky, but not scary