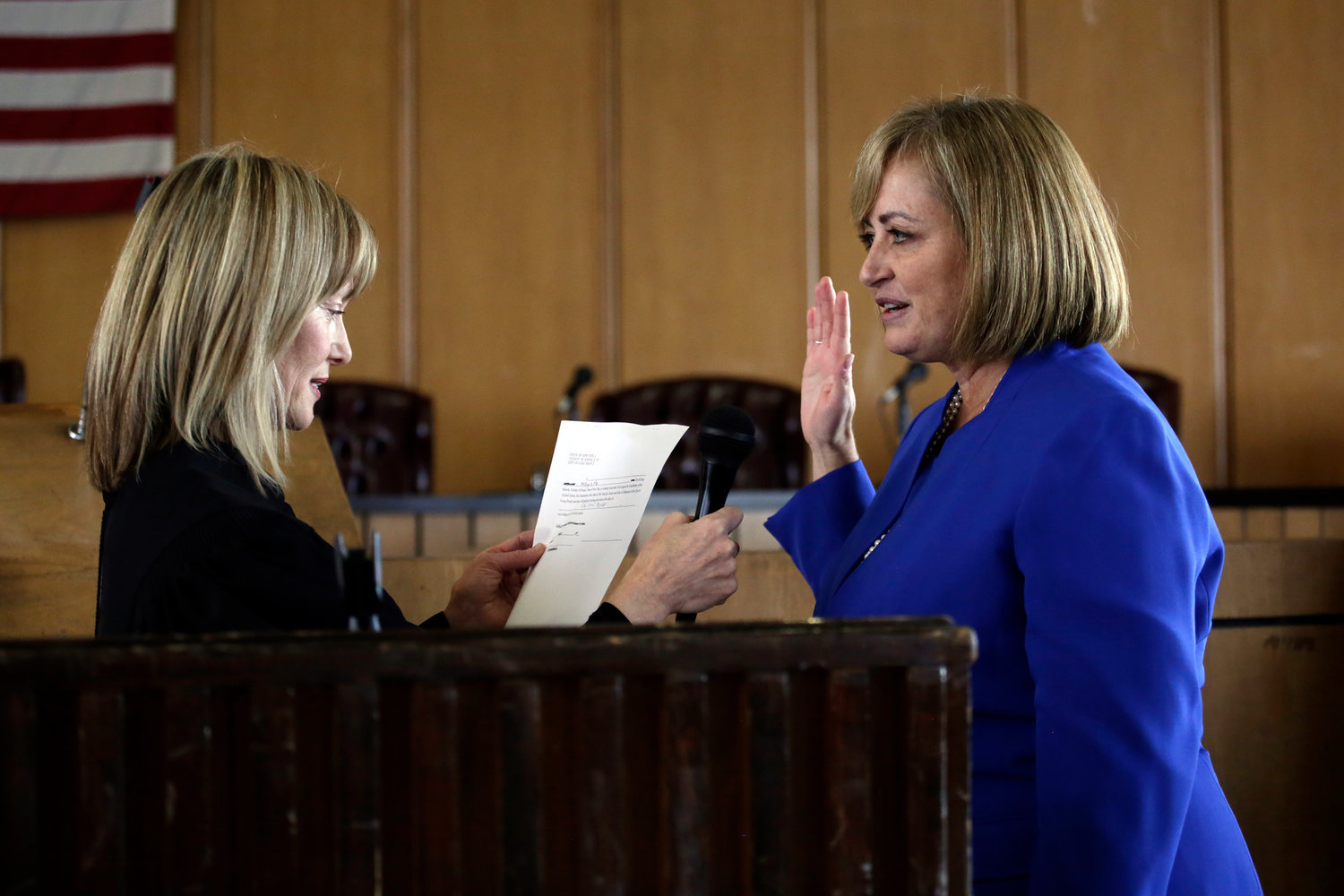 Karen McInnis is sworn in to serve on the Long Beach City Council, which is now dominated by women, 3-2.
Herald File Photo
By James Bernstein and Brendan Carpenter

Karen McInnis once asked a boss what her job title was.

He said, according to her, “It’s Getting S…Done.”

That was some years ago, but that jocular “job title” has remained with McInnis, the 51-year-old president of the Long Beach City Council, who was elected to the council in November, 2019, and became its president this past January, replacing John Bendo who remains on the council but served two years as president.

McInnis is only the second woman to be council president, following Anissa Moore, who was elected to the council in 2015 as its first African-American. Moore is now a deputy Nassau County Executive.

Told that it is now the McInnis Council, as opposed to the Bendo council, McInnis flatly rejected the notion.

“Everyone has a different style,” she said in a telephone interview. “It’s not the McInnis council. It’s the city council.. Growing up, I played a lot of team sports. I always knew I was better on a team.”

McInnis said this is the way she runs the council. She was a softball pitcher, she said, “but I always needed my teammates.”

The city council has had a busy six months under McInnis:

It has settled the $151 million suit filed against the city by the developer Sinclair Haberman. Long Beach will pay Haberman $75 million and allow the developer to build two 13 ½-story apartment building on Shore Road. The suit had dragged on unsettled for three decades as previous councils “kicked the can down the road,” as Bendo said frequently. The settlement led to improved financial forecasts by Wall Street.

The council approved a 2022-’23 budget that carried a 4.96 percent tax hike.     McInnis said she was not happy about the tax hike but the council and city officials said it was needed to cover the costs owed in separation pay to retired former employees, police and fire fighters. McInnis said that what was significant about the budget as it that it required no borrowing a “substantial departure” from previous years.

McInnis was instrumental in retaining city manager Donna Gayden, who was hired in 2020, just months before the Covid pandemic swept the country. Under McInnis the council approved a contract extension for Gayden that will keep her in the role until the end of 2023. Gayden, a municipal financial expert, is largely credited with engineering the Haberman settlement.

At council meetings, McInnis is firm and business-like, once shepherding the body and the audience through four lengthy public hearings. “We can get through this, folks,” she said.

“I’m just one member,” she said in an interview earlier this week. “But I feel I helped the council establish its role and responsibilities.” But, she said, she and other council members rely heavily on the city’s professional staff members, such as the comptroller and city manager.

“They work all of the time, so that I can sleep at night,” she said.

“I think of Karen as the captain of our team,” Treston said. “Just like a captain, she knows our strengths and weaknesses. She knows what we’re good at and where to send us to learn to be better council people and better listeners to the community.”

“The majority of the people don’t realize things are starting to change. The city finances over the last two years has gone up significantly. Karen has been influential in that.”

“She also has a wicked sense of humor that no one sees,” Treston added.

Councilwoman Tina Posterli, who was just elected in November, said,

“President McInnis is dynamic and strategic. She recognizes we are a team of five who along with the administration, share the common goal of moving the City forward. That comes across in how she leads in her role as president, with a keen focus on working together.”

McInnis’s father was a union carpenter and she was raised in the Bronx and lived in Valley Stream. She was a Triple Variety player at Valley Stream Central High School and later a softball pitcher at SUNY Binghamton. She graduated the University at College Park, Md., and St. John’s, majoring in government.

She is chief financial officer at the Association of American Publishers, a non-profit that represents book, journal and education publishers on law and policy.

She bought a house in Long Beach in 2014 and remarried.

McInnis once worked at The Topps Company, which makes sports cards and chewing gum. There, she asked her boss what her title was. He answered her.