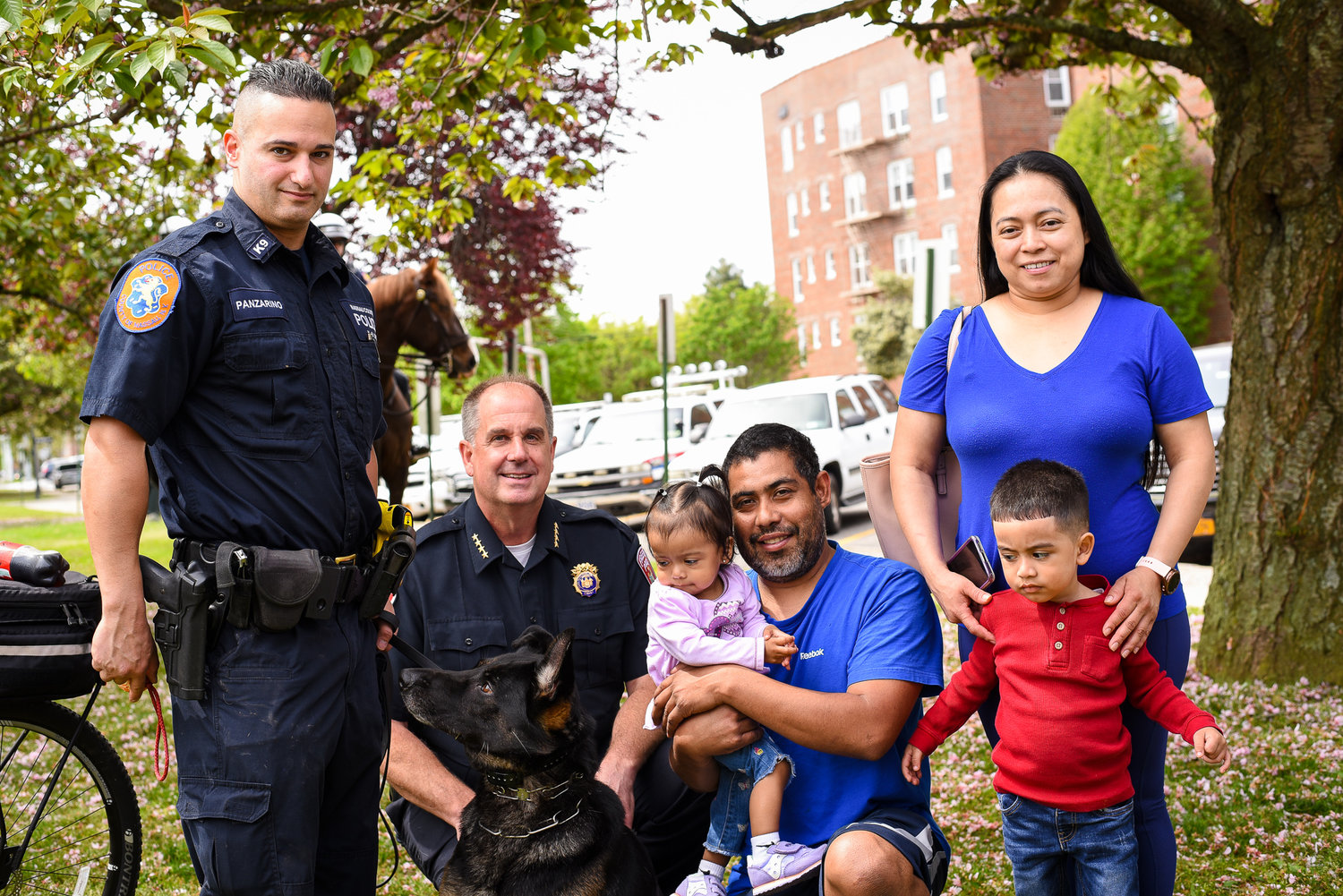 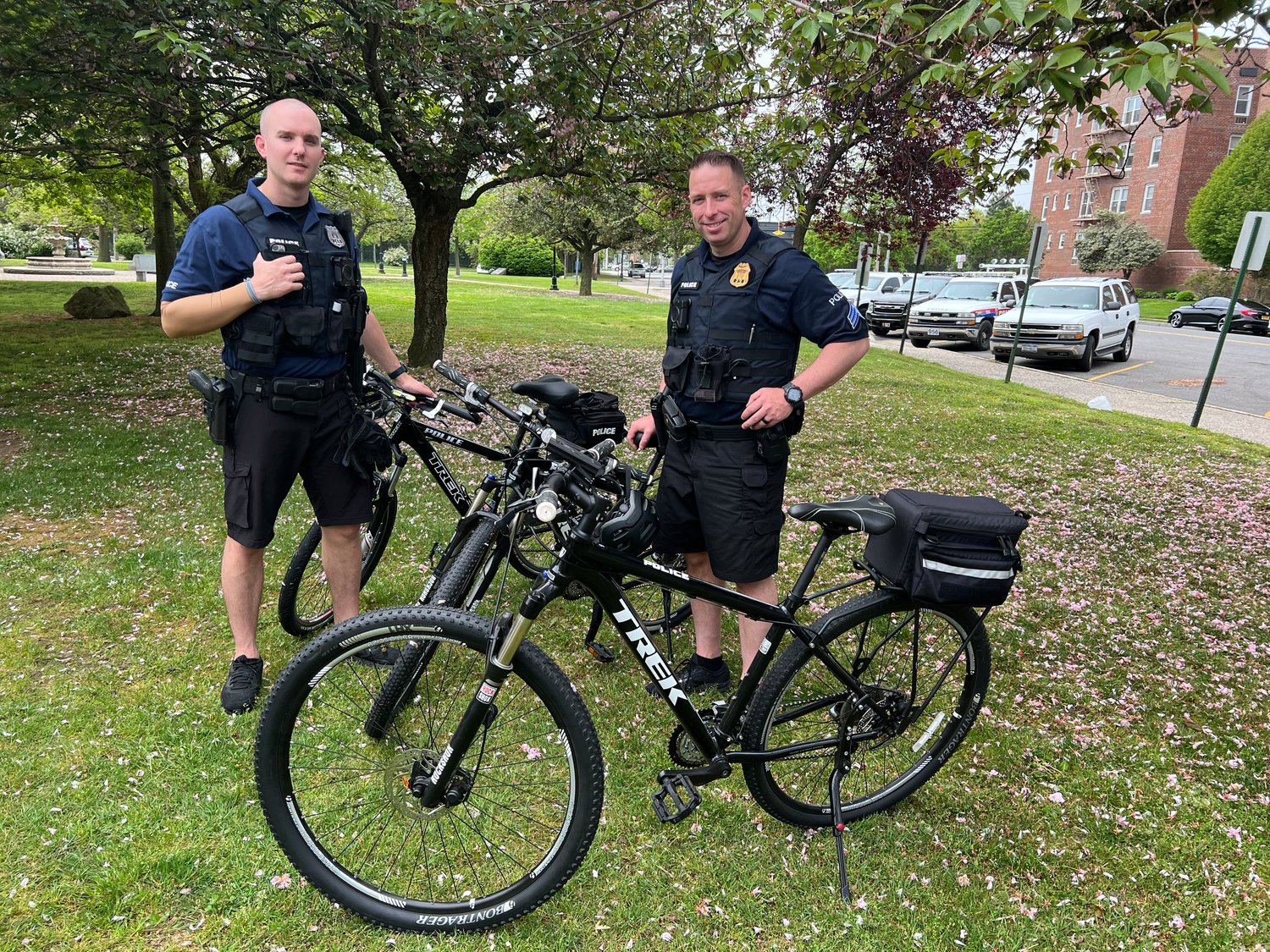 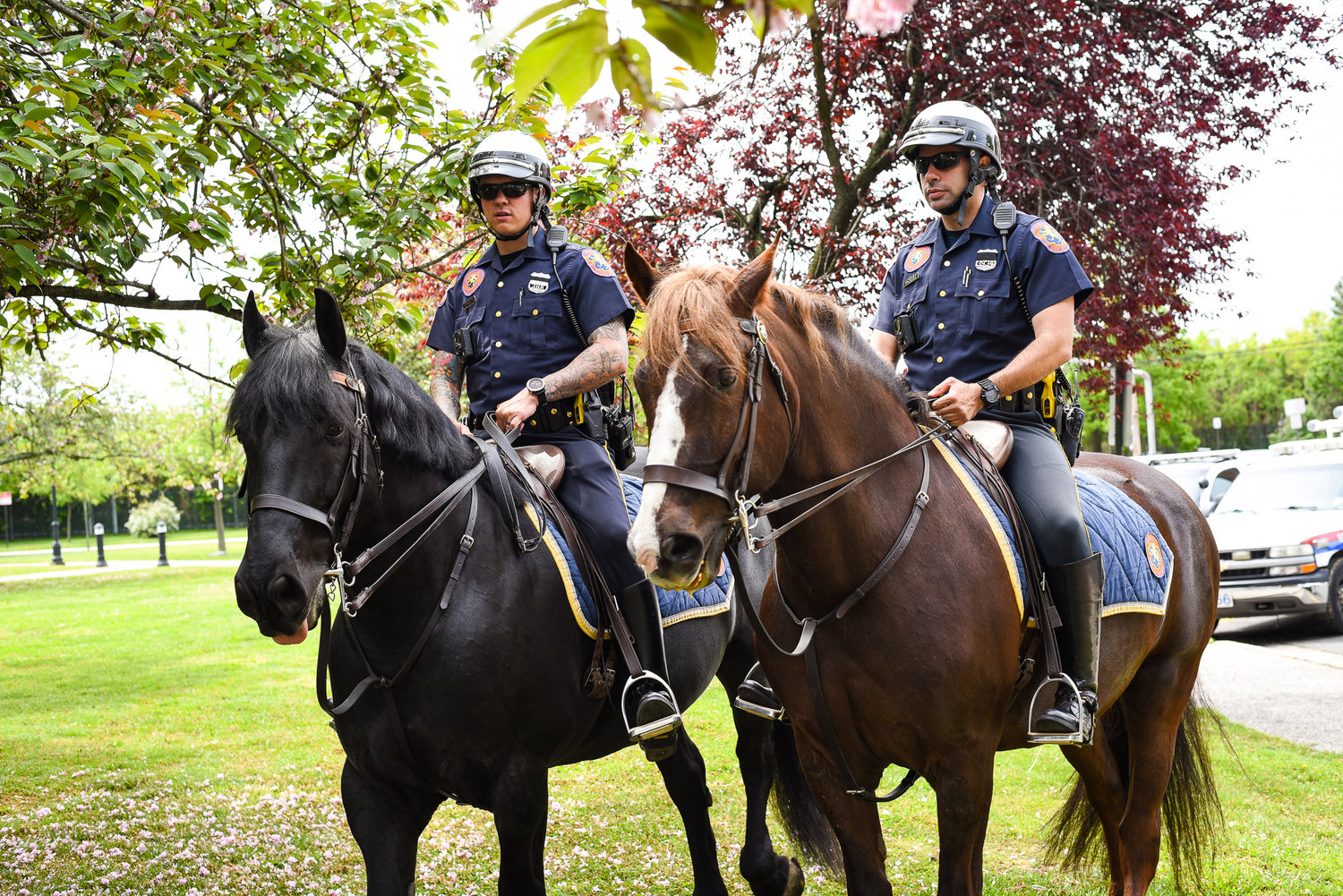 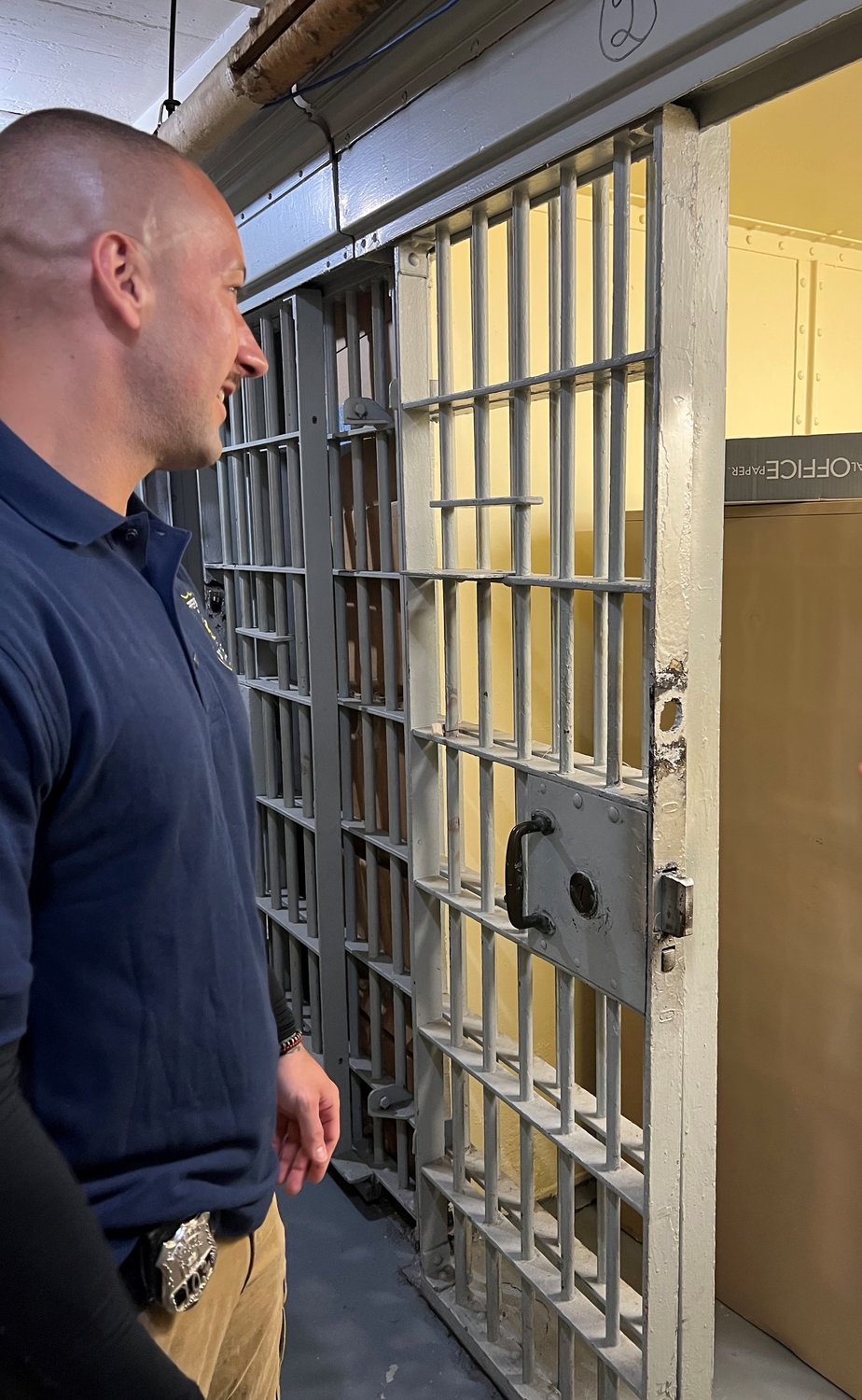 Police Officer Matthew Koutsogiannis showed visitors the jail cells of the past, which are now used for storage. These old cells are the only part of the Police Department that may appear in a photograph.
Courtesy Freeport Public Relations
Previous Next

The Freeport Police Department’s Open House Saturday was an opportunity for residents to meet their peace officers and see the department’s methods for keeping the village safe.

The event, on the scenic grounds of the department’s headquarters at Free Port Village Hall, featured the Police Benevolent Association providing tables full of informational literature and toys for visiting children.

Near the PBA tent, Officer Scott Panzarino stroked the head of his K-9 Unit partner, a six-year-old male German shepherd named Steel, one of eight working K-9s in the department.

The dogs might track a suspect who has fled, or a person with dementia who has wandered from home. The residue of human scent also leads the dogs to stolen property that a suspect has tossed while running. The dogs are also trained to detect narcotics, bombs and even stolen electronic equipment or catalytic converters.

“We had a call from the post office two years ago,” said Panzarino. “Three suspicious packages. Steel alerted to each package, we got a search warrant, we opened them, and each package had a kilo of cocaine in it.”

The dogs also help with community outreach, such as visiting Freeport school classrooms for the Adopt-a-Cop program.

Not far along the lawn from Panzarino and Steel, Officer C. Cooke and Sergeant J. Florio stood beside their department-issued mountain bikes.

“Community interaction is the main focus for the bikes,” said Florio. “Instead of driving around in a car and having to find somewhere to park, we stop the bike and talk to people. People walk by and say, ‘Nice bike,’ and it helps with the interaction.”

“It also is a crime fighting tool because it’s easier to sneak up on someone,” added Cooke. “They’re looking for cops in cars, not on a bicycle. It’s easier for dealing with quality-of-life stuff like people drinking in public.”

A pair of mounted Nassau County Police officers walked their tall horses onto the lawn, drawing the admiration of Ingrid Ortiz, Miguel Lopez, and their two tiny children, 18-month-old Katya and three-year-old Brando.

“We have Tank, the black one, and Valor is the brown one here,” explained one of the officers while the children looked on, wide-eyed. “They’re a patrol unit all over the whole county. When 20,000 people come out of a show at the new UBS arena, we’re on the horses waiting. If something happens, we can get into the middle of the crowd very easily.”

“They say one horse is as good as having ten cops in manpower,” said the other officer. “It’s great for community relations, too.”

Officer Matthew Koutsogiannis provided tours of the station house. Inside, an officer sat at a high desk behind plexiglass, watching multiple monitors that connected to cameras in various locations throughout the village. A dispatcher occupied a desk nearby where calls came in. Walk-ins were directed from that desk to the report room or the courtroom.

Koutsogiannis brought the tour to the clerical room where reports are taken and files are stored. “Everything that we officers do, we document, from the littlest thing to the biggest thing,” Koutsogiannis said. “An arrest, that’s four or five hours of paperwork.”

He pointed into the courtroom, where traffic and village ordinance offenses such as littering were processed. Anyone arrested for crimes like stealing and assault would be processed at the station, but then taken for arraignment to the Nassau County District Court at 99 Main Street in Hempstead.

Processing happens on the basement level in the arrest room where two large computers specialized for inkless fingerprinting are used along with a high-definition camera setup for taking booking photos. The next stop would be the gray-barred holding cells.

“So if somebody is arrested and we have to fingerprint them,” said Koutsogiannis, “we’ll sit them there and we’ll cuff them [in the cell], and then we’ll get the equipment ready. When we’re done, we’ll uncuff them and they’ll go in front of the high-definition camera.”

Once the finger printing is completed, photos and fingerprints are transmitted electronically to Nassau County, and if they are acceptable, then the suspect is either transported to district court or given an appearance ticket and released, depending on the seriousness of the charges.

“And you can see here sometimes,” said Koutsogiannis, indicating bent bars on the lower part of both holding cells, “the prisoners aren’t usually very happy, so some will kick, and the bars are bowed out here. No one likes to be arrested.”

Back out on the lawn, Margaret Hunt, 65, who once worked with the Thoroughbred Racing Protective Bureau, said she had lived happily in Freeport eight years, and came because she saw notice of the open house—and the mounted police—in the past week’s Freeport Herald.

Resident Rita Wolfork, who was born and raised in Hempstead, said, “I was down with Hempstead for so many years, but I moved to Freeport five years ago and I’m down with the police department of Freeport now.”