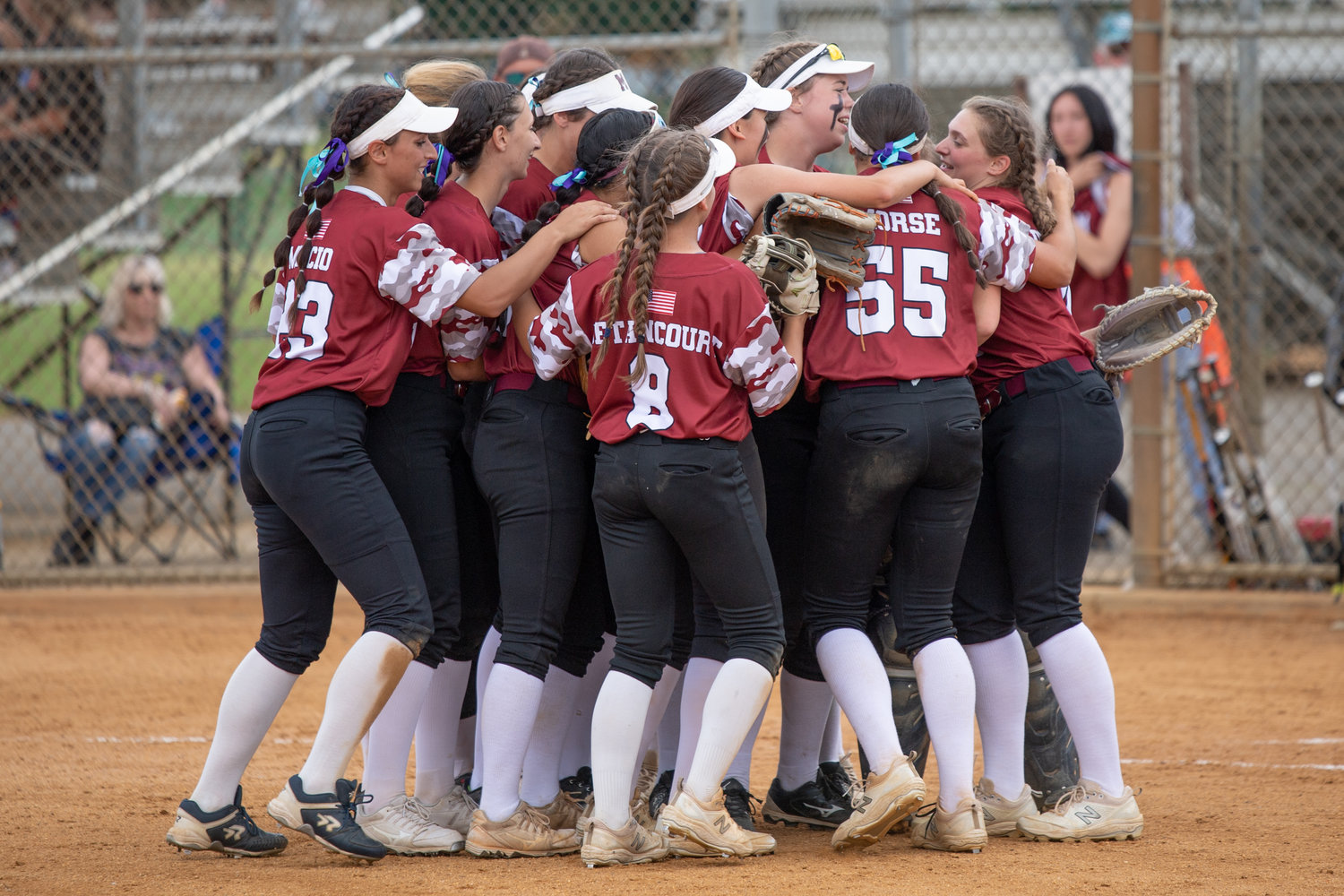 In the opening game of the Nassau Class A softball best-of-three championship series, Mepham proved again no deficit was too large for it to overcome and stunned neighboring Calhoun in walk-off fashion Friday afternoon at Mitchel Athletic Complex.

Then, the following morning, the second-seeded Pirates came out swinging and scored six times in the top of the first inning and never looked back on the way to capturing a third straight county title with a 10-4 victory in Game 2. The last four innings were completed Sunday after a fast-moving storm brought torrential rain to the area Saturday and left the field in unplayable condition.

“It’s so amazing,” said Mepham senior Alanna Morse, who starred in Game 1 with two home runs over the fence and 7 RBIs, including the game-winning sacrifice fly in the bottom of the eighth that brought home junior Lily Yepez all the way from second base for a thrilling 11-10 win. “We’ve worked so hard all year and not for one second did I doubt our chances,” Morse added.

The Pirates (18-4) will look to defend their Long Island Class A crown this Saturday against East Islip at 10 a.m. at Moriches Athletic Complex in Suffolk County. Fifth-seeded Calhoun, which upset No. 1 MacArthur in the semifinals, finished 16-8.

“These girls have battled all season and it’s so exciting to see them rewarded,” Mepham first-year coach Tom Simone said. “Twice in the playoffs we’ve come back from 10-3 down to win. We did it against Plainedge in Game 1 of the semifinals and then also against Calhoun in Game 1.

“The girls just stay positive, trust each other and keep plugging away,” he added.

In addition to Morse, seniors Hailey Guerrero (home run, 3 RBIs) and Kylie Persampire (3-for-4, including the game-tying RBI triple in the bottom of the seventh), sparked the Game 1 rally in the finals.

DeLutri said stepping into the circle Saturday morning with a big cushion helped calm her nerves. She also helped her own cause in the six-run outburst in the first with an RBI single and scoring on junior catcher Sara Muoio’s two-run double.

“We always have each other’s backs,” said DeLutri, who struck out 13 in the championship series. “The offense picked me up in the first game and to score six runs in the first inning yesterday really helped take the pressure off.”

The Pirates held a 6-0 lead after three innings Saturday when severe rain forced Game 2 to be completed on Sunday. Calhoun got on the board in the bottom of the fifth when senior catcher Gabriella Razza blasted a two-run homer over the fence in left to make it 6-2.

Mepham responded with four runs in the top of the sixth, highlighted by a two-run double by Yepez, for a 10-2 lead.

The Colts, who stunned MacArthur in last week’s semifinals behind senior pitcher Lauren DeMarco, senior designated hitter Rebecca Collins, and a walk-off homer in Game 2 off the bat of sophomore Gianna Haniff, made the Pirates work right down to the last out.

Sophomore Gia Pisicchio doubled home sophomore Gabrielle Facciponti and scored on a double by Collins in the bottom of the seventh before DeLutri recorded the final out with the bases loaded.

“We won our conference and had an incredible playoff run,” Calhoun coach Michael Pisano said. “We lost to a great Mepham team. Our girls have a lot to be proud of and I’m really proud of them.”