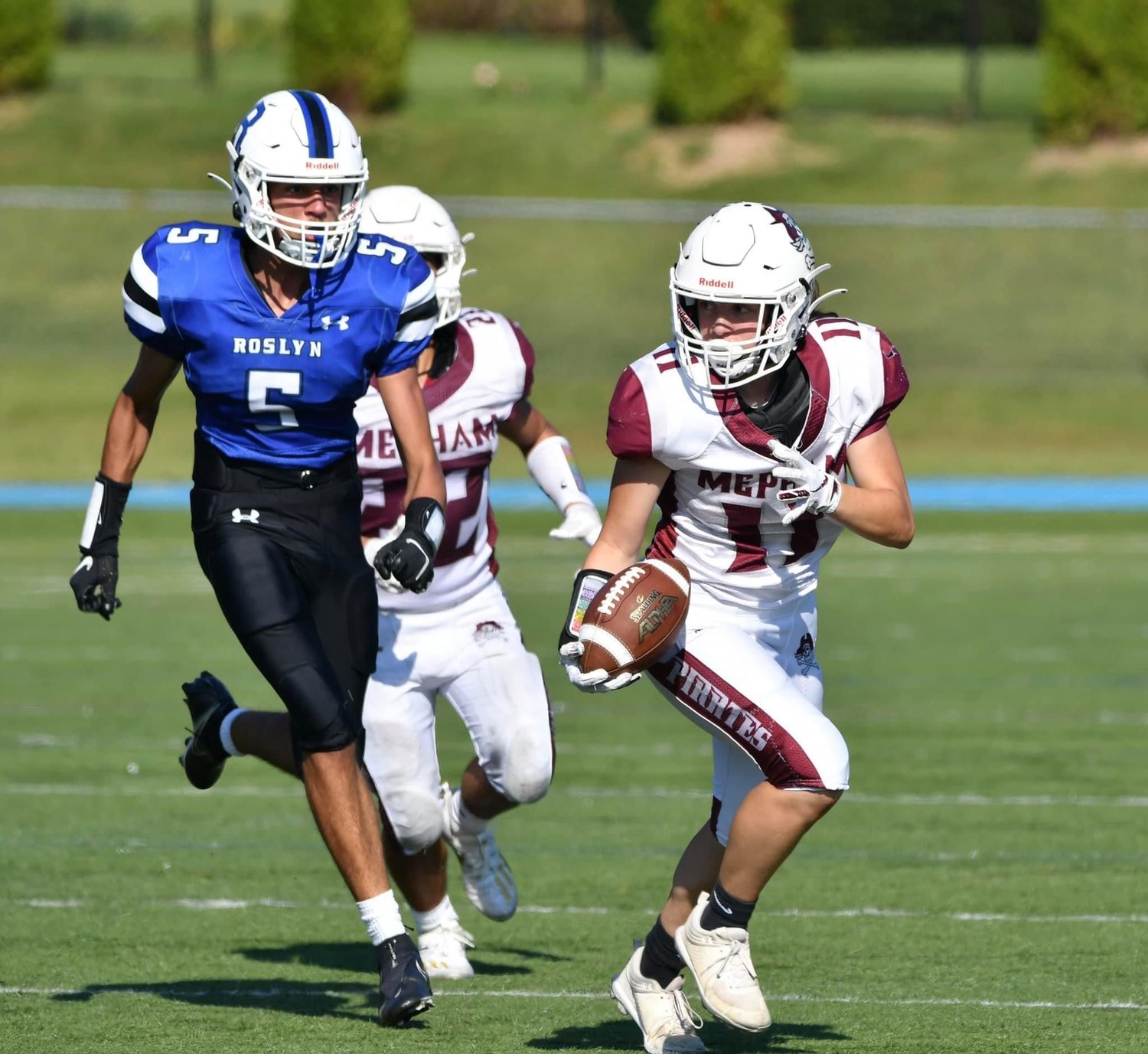 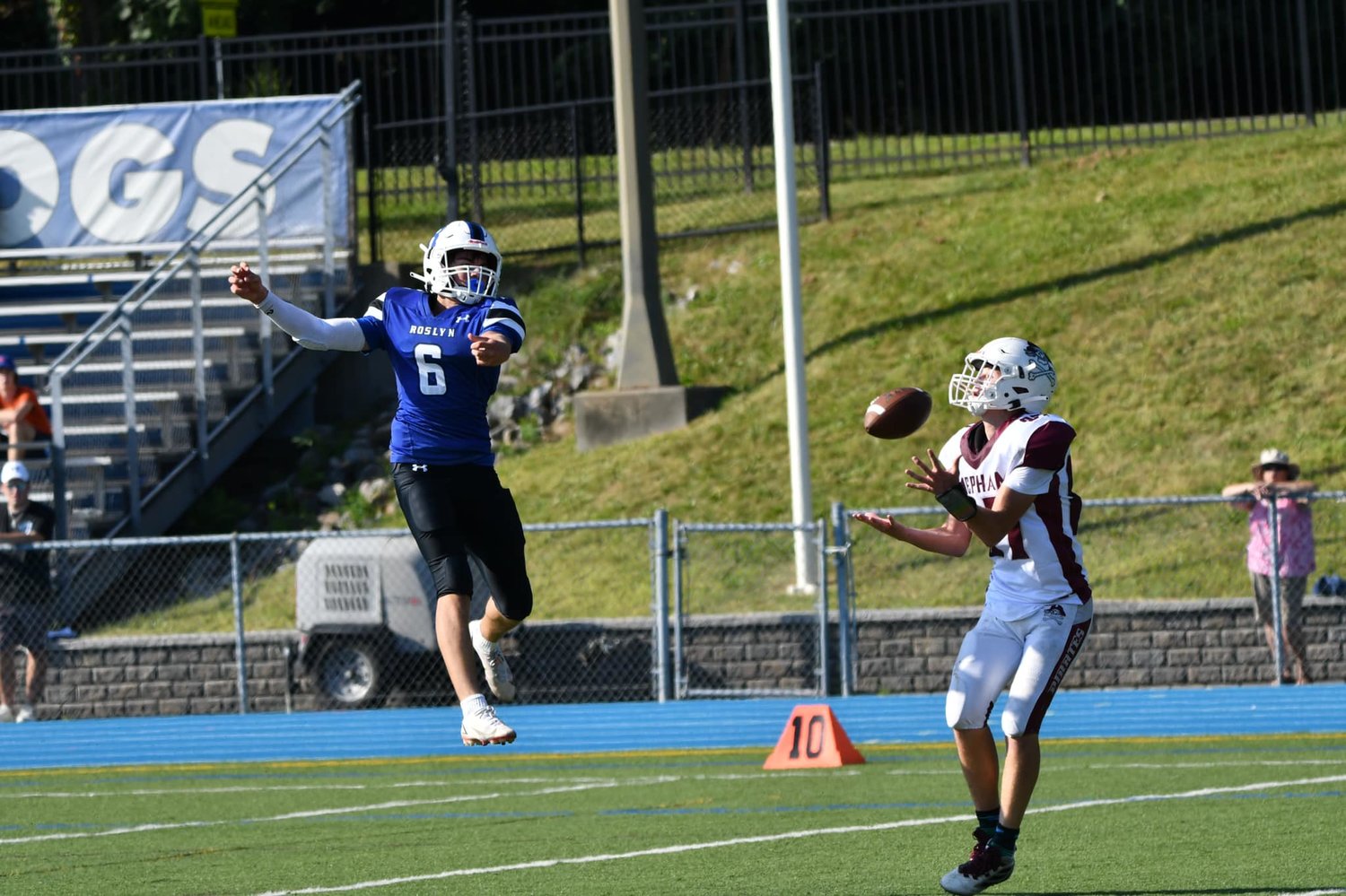 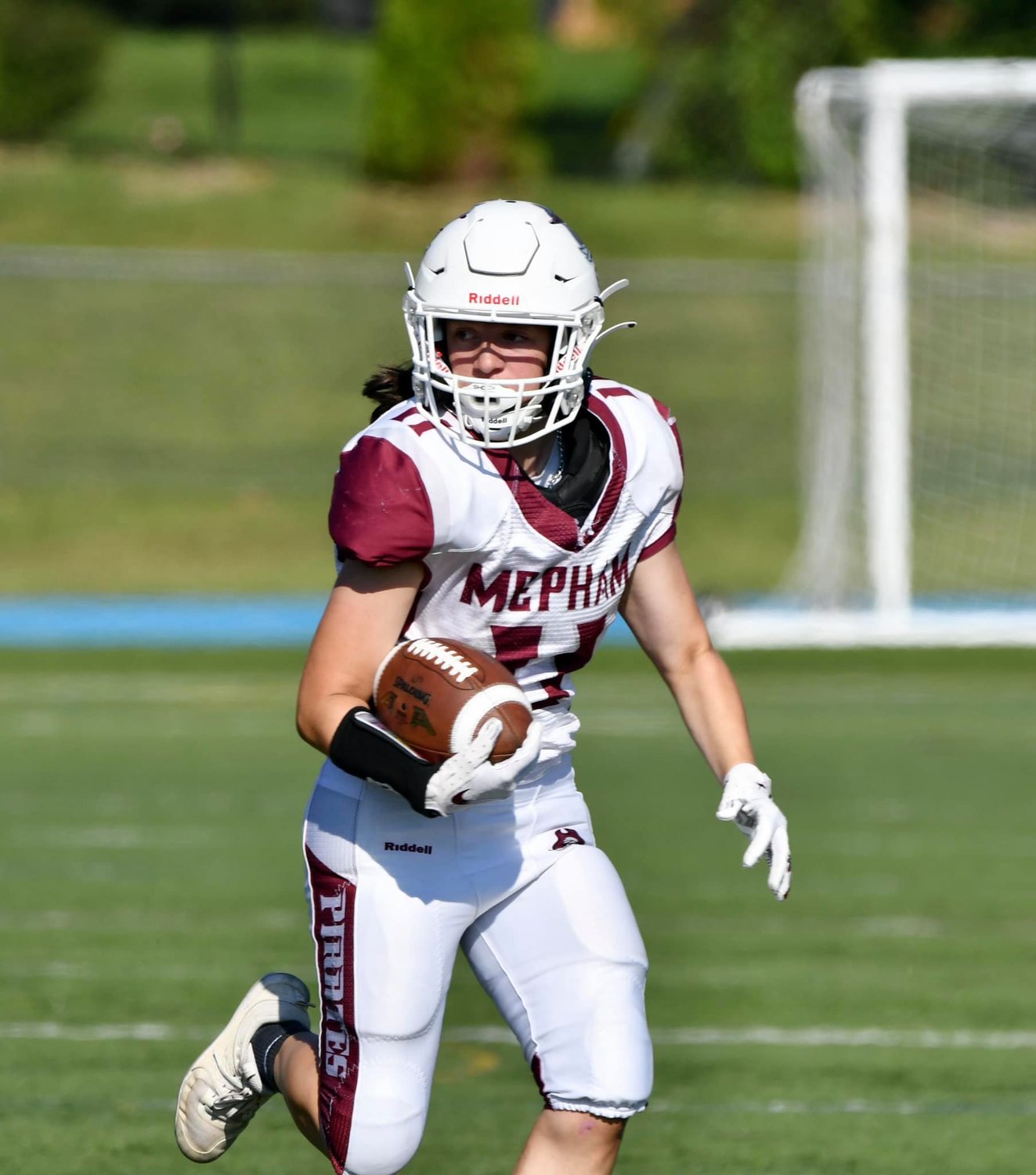 LaSpina became the first girl to score a touchdown in a Long Island game. 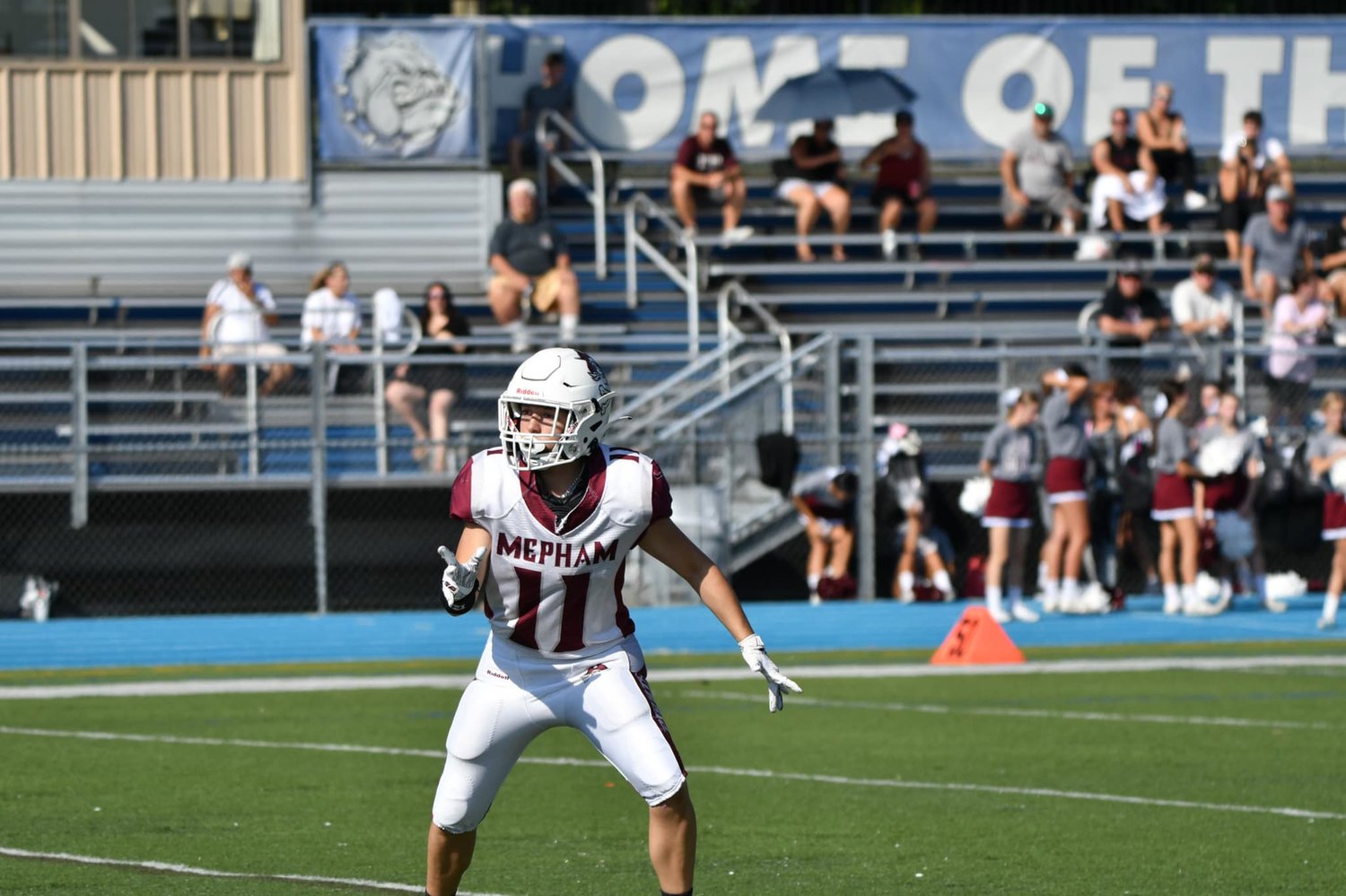 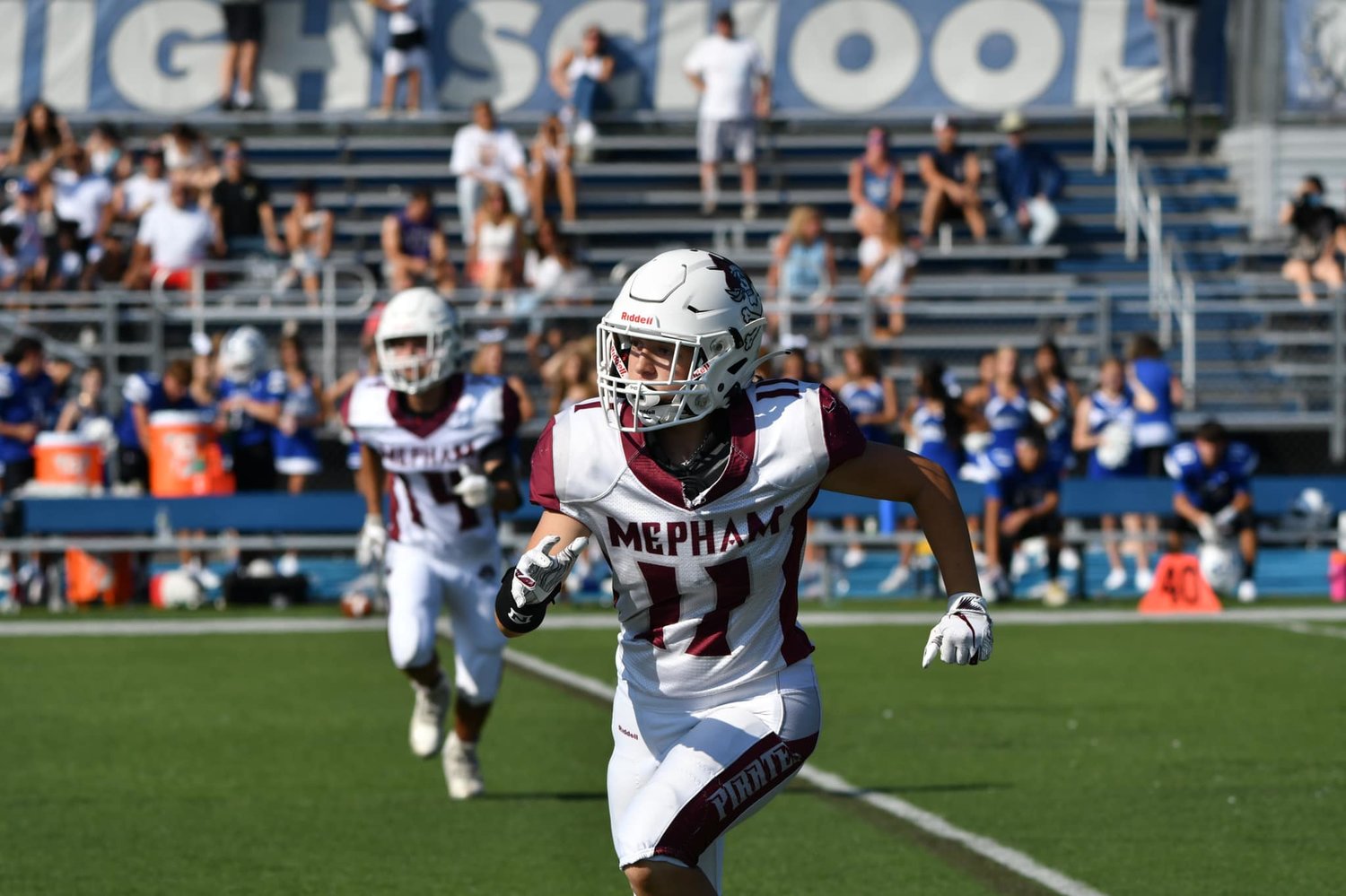 Wellington C. Mepham High School football player Sofia LaSpina made Long Island history last Saturday, becoming the first female to score a touchdown.
The Pirates went on to win the game against Roslyn 49-21, giving them a 2-0 start for the season.

After the game, LaSpina, a 15-year-old junior wide receiver, said she didn’t initially realize her 4-yard reception for 6 points was such a momentous occasion. “I just wanted to make sure I caught the ball,” she told the Herald. Her teammates, she added, “were all so happy for me. They were all cheering me on and stuff.”

“As soon as she caught it, our sideline went crazy,” said coach Anthony Cracco. “They were so excited for her, and I was as well . . . I was just thinking, from a Mepham perspective, how huge it was, and then it turned into a really big deal.”

The catch, of a pass thrown by quarterback Peter Mayo, was no simple one, either. “She’s being modest about it,” Cracco said. “She ran a good route, got open, and the ball was kind of on her off [left] shoulder, so she had to adjust her whole body to make the catch. It wasn’t like the ball was laid up in her hands.”

In the post-game huddle, Cracco gave LaSpina the game ball right on the spot — a first for the coach of 13 years.
LaSpina was also named the New York Jets High School Football Player of the Week, and will be honored at an upcoming Jets game. The award includes a $1,000 donation to the district football program from the Jets and Gatorade.

She was also the focus of plenty of media attention, including a spot during NBC’s “Sunday Night Football.” Adam Schefter, a John F. Kennedy High School alumnus and a senior NFL correspondent for ESPN, sent LaSpina a congratulatory message on Twitter.

“Sofia is really unique in that, aside from her having to remind me the first couple days of practice that someone needed to open the girls’ locker room, you’d never know there’s a female on the team,” Cracco said. “She doesn’t want to be treated any different. Her teammates don’t treat her any different. She comes out and just works, and she continues to get better.”

LaSpina played for the Pirates her freshman year, and has returned this year as a junior. She got her start in seventh grade, at Grand Avenue Middle School after picking up the sport in her backyard.

“I thought it was a very fun sport, so I just decided to play it in middle school and high school,” she said, “and maybe in college.”

LaSpina said she has blended in with her fellow Pirates. “They all treat me as just another teammate,” she said.
Asked whether her history-making catch signifies a new direction for the sport, she said, “I hope so.”

“I feel like a lot of girls feel like they won’t fit in, or no one will let them,” LaSpina said, “but I hope it shows girls they can do whatever they wanna do.”