Mepham High wrestlers are ‘Queens of the Mat’ 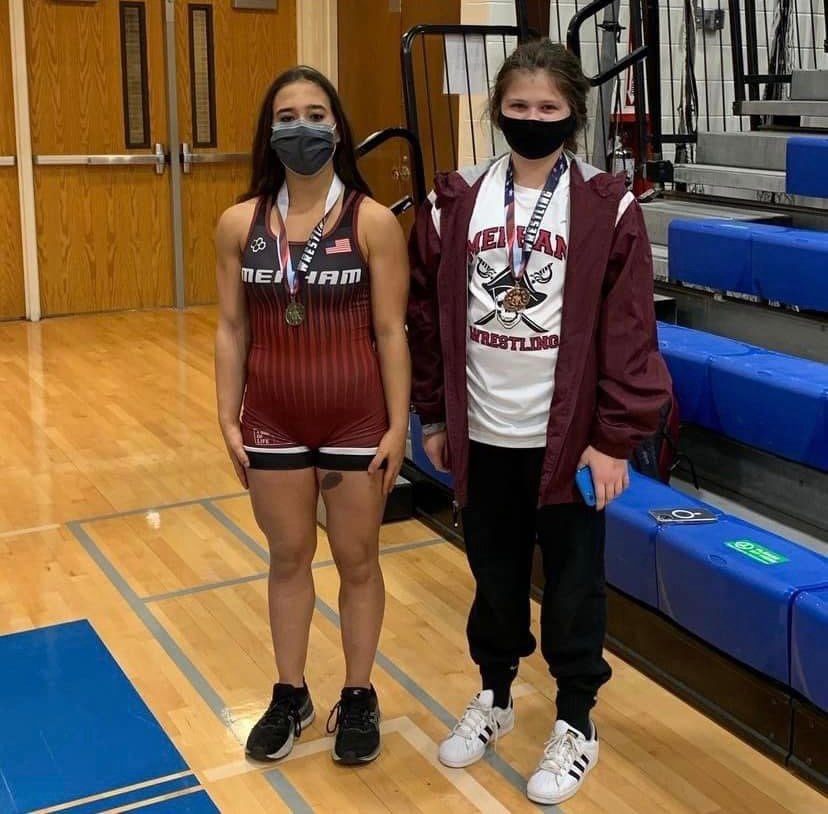 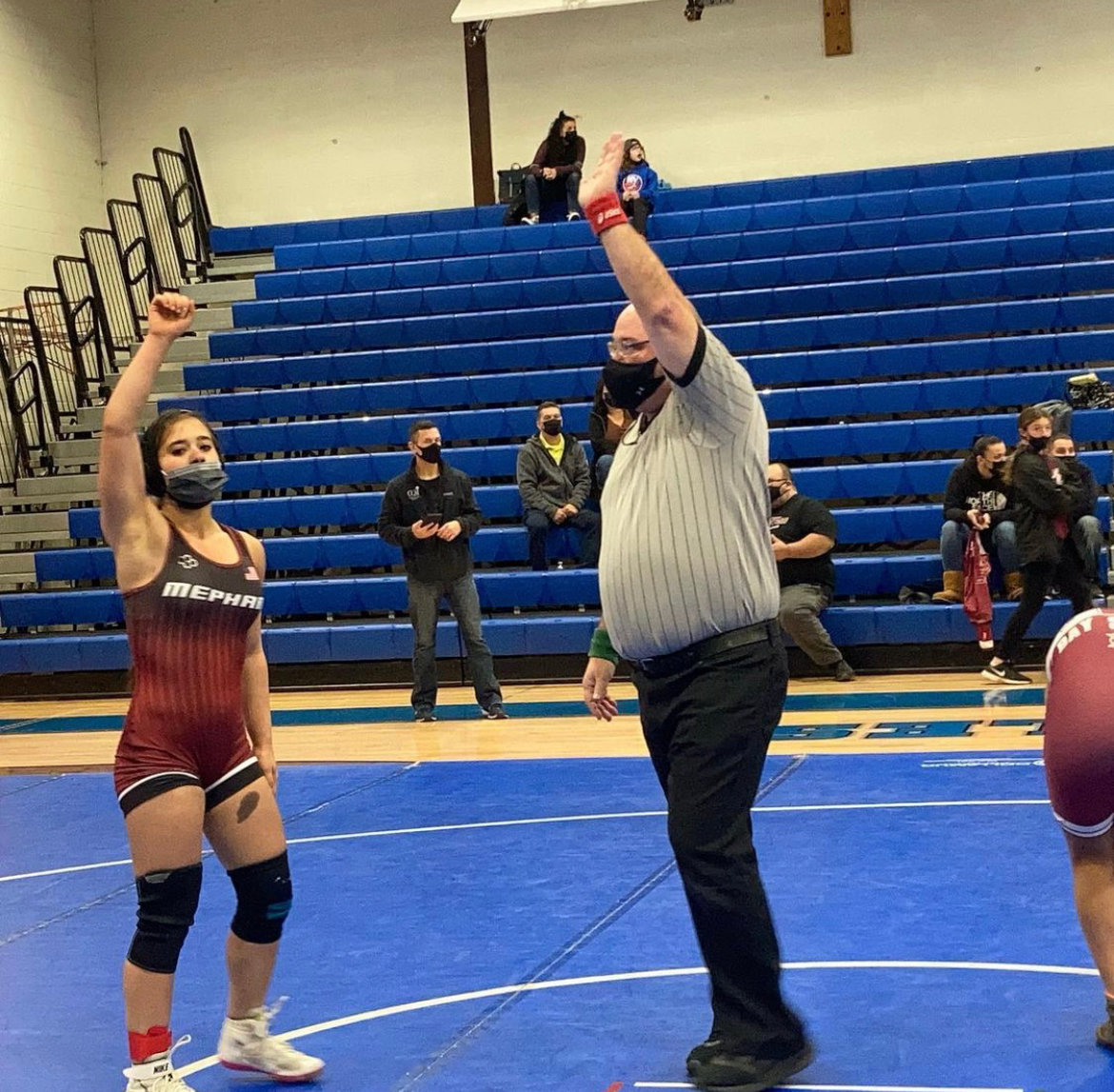 Yianna Foufas, above, won all four of her matches at an all-girls tournament earlier this month.
Courtesy Bellmore-Merrick Central High School District 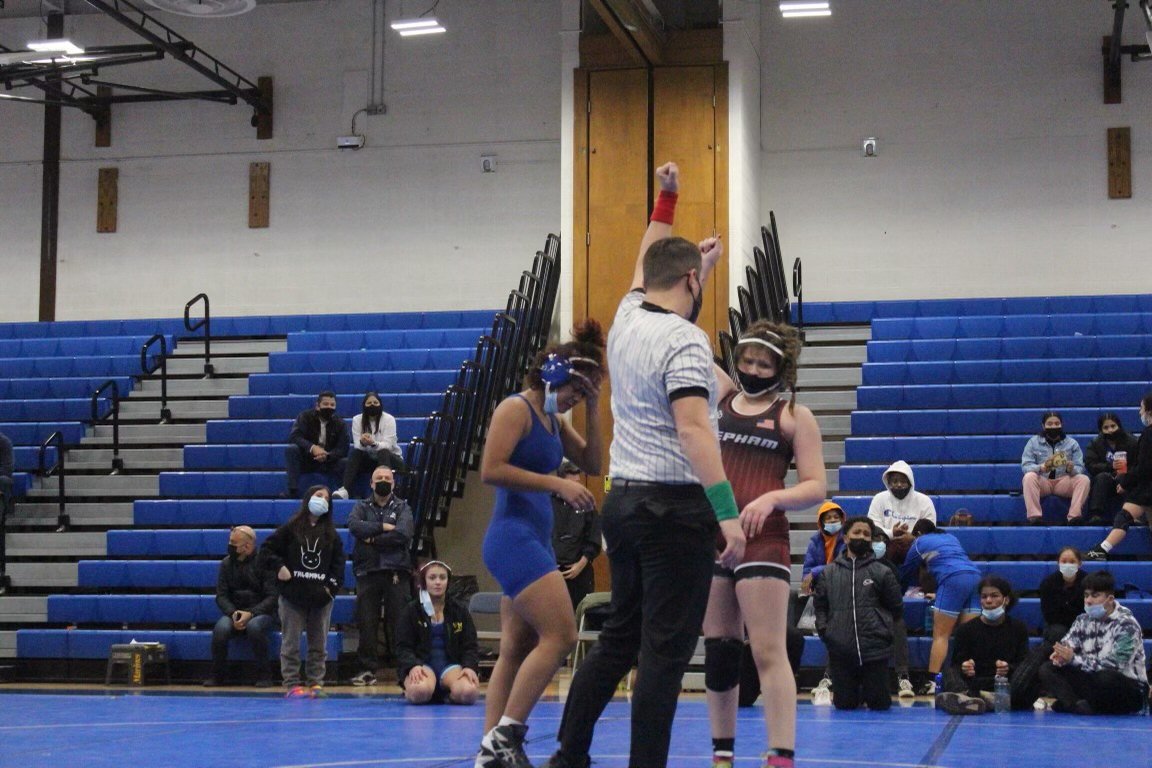 Talia Robles was a winner as well.
Courtesy Katie Robles 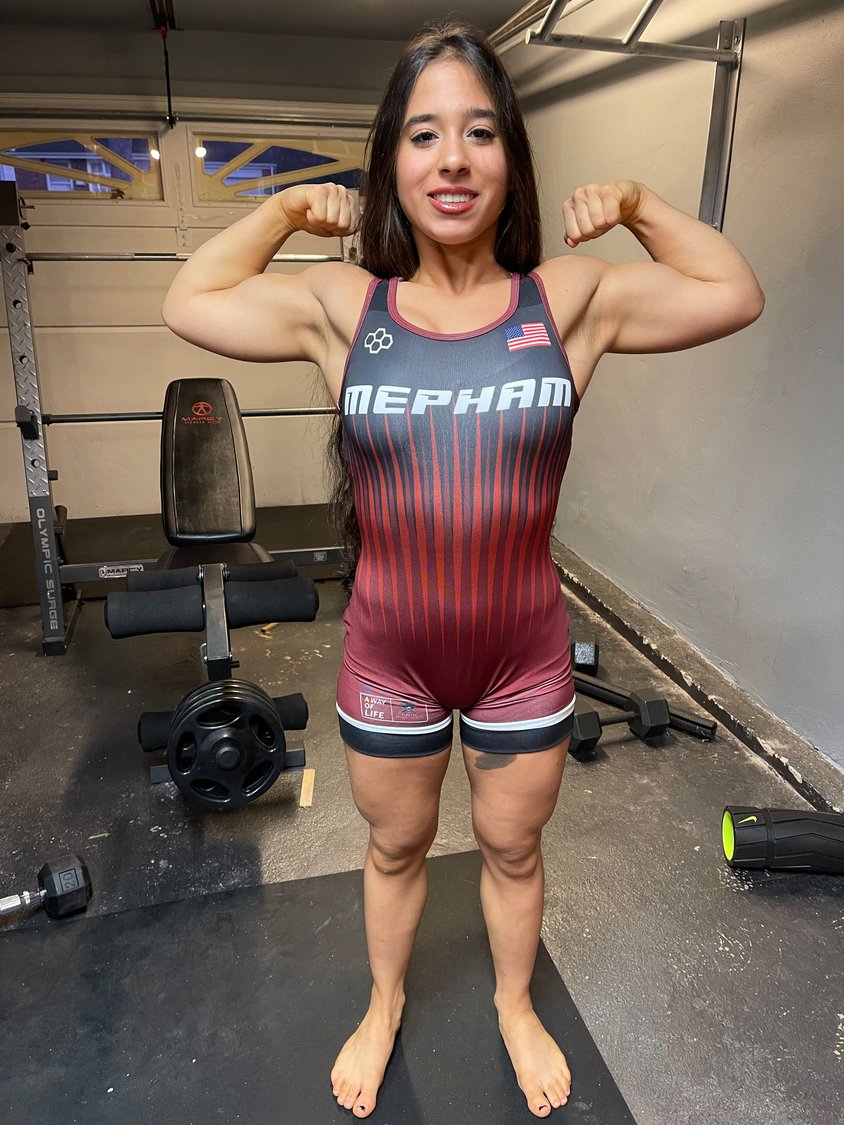 For Foufas, wrestling is about breaking stereotypes.
Courtesy Yianna Foufas
Previous Next
By Jordan Vallone

Earlier this month, two Wellington C. Mepham High School students competed in an all-girls wrestling tournament dubbed “Queen of the Mat” in Copiague. Yianna Foufas and Talia Robles were the first students in Mepham’s history to take part in a girls-only tournament.

Foufas, 15, of Bellmore, told the Herald that before she started wrestling, she wasn’t interested in sports. “In early elementary school, I sucked at all sports,” she recounted. “I was always the kid that got picked last — I did not want to be in sports at all.”

Deciding to change, she said, “During recess, I started working out. I was running around the playground, doing pull-ups on the monkey bars.”

An avid artist with an interest in fashion design, Foufas joked that her outside interests were “very different from wrestling.”

Toward the end of elementary school, she started to learn Brazilian jiu-jitsu and strength training. “I said to myself, ‘Hey, I’m pretty strong for a girl,’” Foufas said. “I went from the kid who sucked at all sports to the girl wrestler.”

She has also competed in track and cross-country at Bellmore-Merrick.

Robles, who’s also 15 and also from Bellmore, is an animal lover and a rescue volunteer. Her interest in wrestling grew from watching her older brother, Nicholas, compete in the sport.

“I started wrestling toward the end of sixth grade,” she said. “I always went to all my brother’s matches, and it always looked really fun, so I decided to start it.”

Both Foufas and Robles have been wrestling for Bellmore-Merrick since they were in seventh grade at Grand Avenue Middle School in Bellmore, and joining the middle school team was daunting, but at the same time a welcoming experience. They are now both on the wrestling team at Mepham.

“Coming onto the team was very nerve-racking,” Robles said. “But my brother helped me along the way. The coaches were so supportive, and helped me — they made the team so welcoming for me and Yianna.”

“A bunch of the [wrestlers] knew me as the fast kid from cross-country, but I was pretty shy at the time,” Foufas said of joining the middle school team. “I felt like I needed to start winning to gain their respect — I thought I needed to work 10 times harder to keep up with them. If they were getting stronger, I needed to also. It was long nights of wrestling and working out, but I felt like I needed to do more.”

Both girls agreed that last season was challenging due to Covid-19, because, as Foufas noted, “you can’t social distance and wrestle.”

“I think I got maybe two matches in, and Yianna had only one,” Robles said of last season.

“This season we need to make up for last year,” Foufas added. “This year needs to be twice as successful, and it’s been pretty good so far. I like the coaches — the team has good energy. Wrestling is the kind of sport where you need mat time to get better. Everyone this year has to work twice as hard.”

“The girls’ tournament at Copiague was an amazing experience,” Robles said. “There were a lot more girls that I thought there would be.”

Wrestlers from schools in Nassau and Suffolk counties competed. Some Suffolk school districts, such as Bay Shore, have girls-only wrestling programs.

“[They] have worked extremely hard in order to place in this tournament,” Mepham wrestling coach Ken Richards said of Robles and Foufas. “These girls have worked tirelessly all off-season, and this is just the beginning of their success.”

Both girls have trained at clubs outside Mepham. Robles said that Savage Wrestling Club, in Huntington, and Alpha Girls Wrestling, in East Islip, have helped her tremendously. Foufas has also trained at Savage, and at Vougar’s Wrestling Club in Syosset, and said that her coach, Enas Ahmed, has been a huge contributor to her wrestling success.

For both, wrestling is also about breaking stereotypes. “People always ask me how it is wrestling all boys, and what I say is that the moment you step on the mat, everyone is equal,” Foufas said. “The thing I love about it is that most people think all girls who wrestle are tomboys — it’s just a stereotype.

“Off the mat, I’m very girly and feminine,” she went on. “I wanted to wear red lipstick to all my matches — wanted to have my nails pink to bring that feminine aspect to the sport. You can be feminine and wrestle at the same time.”

“The thing I love about wrestling is you step on the mat, and someone is trying to fight you — there is something so crazy and special about that,” Foufas said. “There is just something so magical about having your hand raised” when you win. “It’s a hard sport, and I have a lot of respect for everyone in it.”