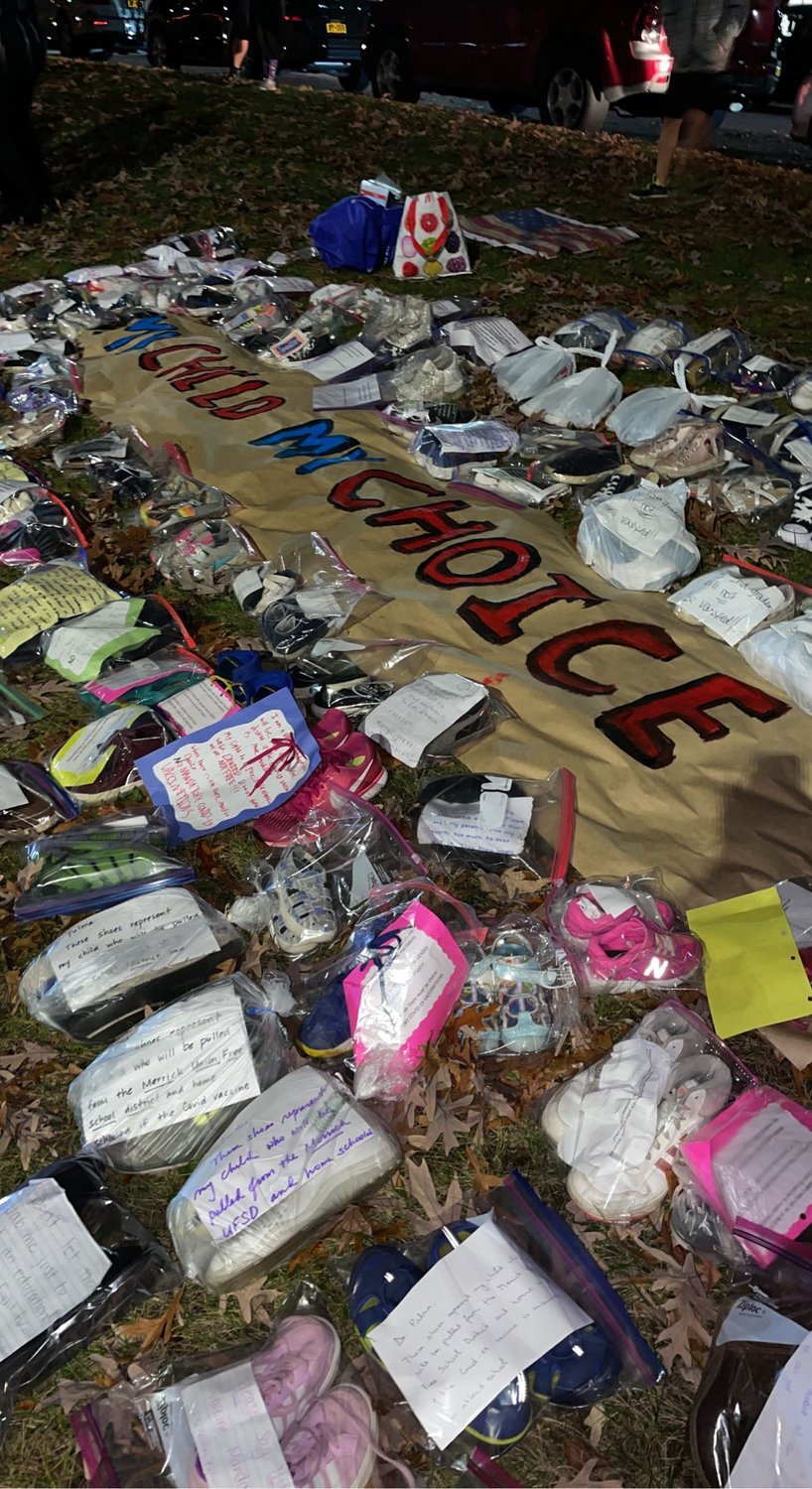 On Nov. 18, parents in 50 school districts across New York State participated in Operation School Drop. A sign reading “My Child My Choice” was spread out on the front lawn of the Brookside School in Merrick.
Jordan Vallone/Herald 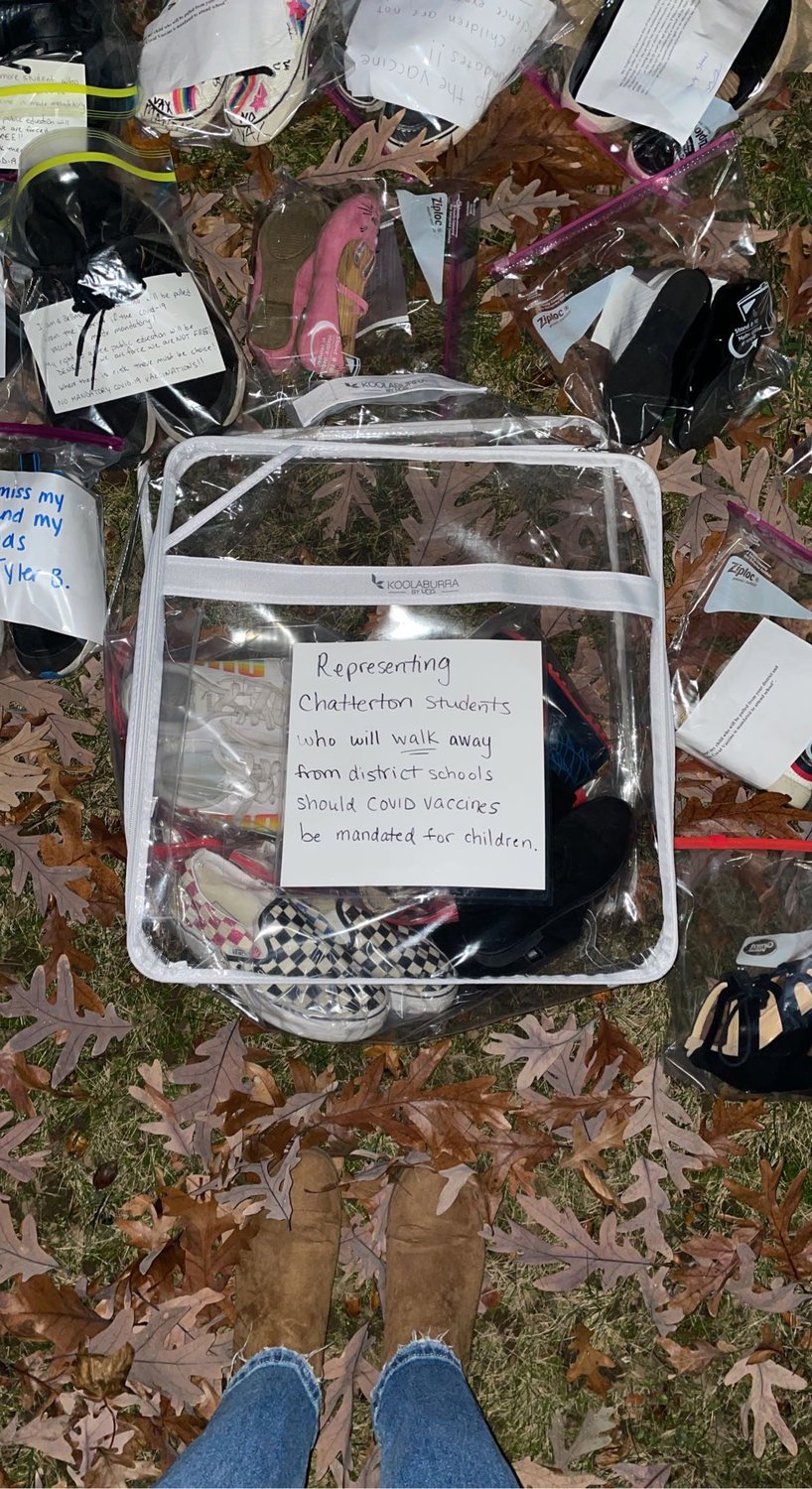 Handwritten notes placed alongside the shoes made clear participants’ motivation for the shoe drop.
Jordan Vallone/Herald
Previous Next
By Jordan Vallone

On Nov. 18, parents in more than 50 school districts across New York state took part in Operation Shoe Drop — an initiative that was created in response to Covid-19-related mandates in schools.

According to the Centers for Disease Control and Prevention’s website, “Students benefit from in-person learning … vaccination is the leading public health prevention strategy to end the Covid-19 pandemic.”

The site further states, “Due to the circulating and highly contagious Delta variant, CDC recommends universal indoor masking by all students (age 2 and older), staff, teachers, and visitors to K-12 schools, regardless of vaccination status.”

Though there is no current mandate for students in New York state schools to be vaccinated, there is increasing concern among parents who are opposed to the vaccine — or to a mandate — that there will soon be one.

Kim Boyette, of Merrick, who has a daughter at John F. Kennedy High School, created the Operation Shoe Drop Facebook page on Nov. 13. She said the page “went from an idea to over 6,000 people.”

Boyette explained that the first shoe drop — with parents leaving shoes in front of a school building — took place in a California school district earlier this month. Dropping shoes represented students walking out of the school or leaving a district should mandates persist, according to Boyette.

Brookside School is home to the administrative offices of the BMCHSD, and by the end of the evening, over 250 pairs of shoes had been left on its front lawn, along with letters, notes and signs demanding parental choice.

The district had not responded to a request for comment at press time.

According to its 2021 guidelines, students and adults inside any district school are required to wear masks.

A statement sent out by BMCHSD Superintendent Mike Harrington reads, “The goal has been to balance safety with the return to normalcy whenever possible … decision making was informed by our experiences over the many months of the COVID-19 pandemic and guidance from the CDC, the American Academy of Pediatrics, the NYS Education Department and NYS and Nassau County Health officials. The procedures outlined will be reviewed continuously and revised as necessary to best meet the needs of our students.”

The momentum to end mask mandates in schools is quickly growing — but as of now, the state has no plans to change the rules. On Nov. 16, Governor Kathy Hochul tweeted, “If we want to get to the point where we don’t need masks — in schools especially — we need to get through the holidays without a spike.”

If the state sees no spike, Hochul added, she would direct the state Department of Health “to look at ways to relax measures, including masks in schools.”

Although masks mandates were a contributing factor to the Shoe Drop, the most pressing issue was vaccines. “Most of us are not anti-vaccine,” Boyette said of those who took part in the demonstration. “We are anti-mandate, and we’re anti-this vaccine.

“It’s only been around less than a year, and if a person wants it, that’s great — I am so happy people that want [the vaccine] can get it,” she went on. “But I don’t want it, and I don’t want my daughter to have it, because I don’t know the long-term effects.”

Many parents in Bellmore-Merrick, however, are vaccine supporters. For them, the inoculations represent a step toward post-pandemic normalcy.

“I am absolutely for the vaccine,” Carrie Kalish, of Bellmore, who has a 14-year-old son at John F. Kennedy High School and a 10-year-old daughter at Shore Road Elementary, told the Herald. “I inoculated my children not only for their own health, but for the benefit of public health. I look forward to a future where they don’t have to wear a mask in school.”

Resident of neighboring school districts, including East Meadow, Seaford and Wantagh, also took part in the shoe drop. The following day, the shoes were collected by the organizers of the event and taken to State Sen. John Brooks’s office in Massapequa. They were later donated to a soccer team in East Islip that was running a shoe drive.

“Maybe one day I’ll be like, ‘Let’s all go get the vaccine,’” Boyette said. “But we’re not there yet, and the truth is, enough people have gotten it that we should be OK.

“It’s like the flu shot,” she added. “Not everyone gets the flu shot. Not everyone should have to get the vaccine. This [protest] literally was formed in less than six days, and look at all the shoes we have. People want freedom, and that’s it.”

Mallory Wilson contributed to this story.