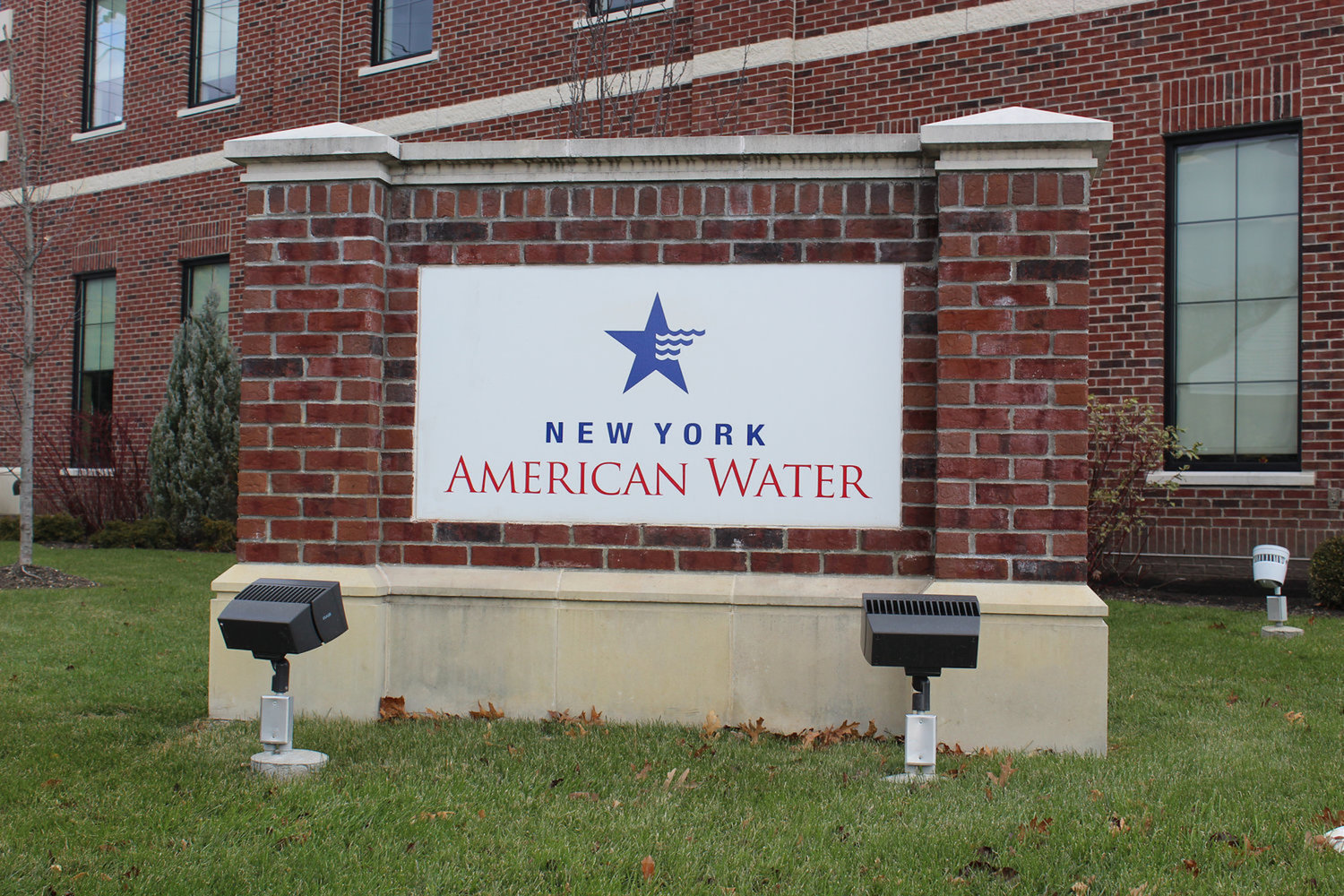 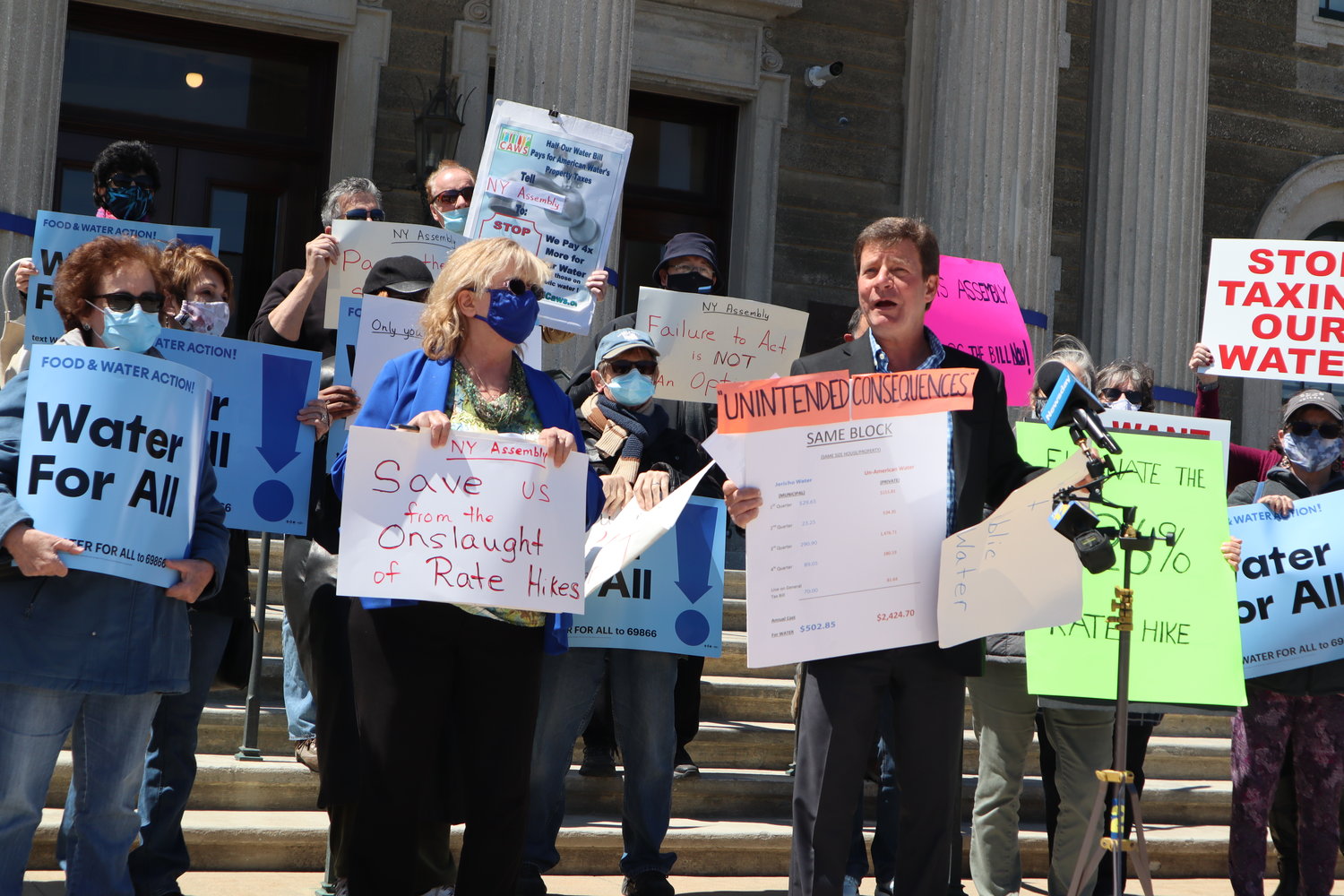 Claudia Borecky and David Denenberg, co-directors of the Merrick-based advocacy group Long Island Clean Air, Water and Soil, joined others in April to advocate for the legislation that now awaits the governor’s signature.
Herald File Photo
Previous Next
History repeats itself

2016, after more than five years of deliberations and a $90,000 feasibility study, the board of directors of the Water Authority of Southeast Nassau County voted against a local public takeover of New York American Water, effectively dissolving WASENC.

The authority was charged in 2010 with investigating whether the towns of Hempstead and Oyster Bay could — and should — assume control of American Water. The body was impaneled by the towns after a number of residents complained that the private company was charging significantly higher rates for the same water the towns provide to residents in surrounding communities such as East Meadow.

WASENC retained George E. Sansoucy, an engineering consultant, to study the feasibility of a public acquisition. A draft study was completed in November 2013, according to WASENC’s secretary at the time, John Reinhardt, now Hempstead’s water commissioner, but the public did not see those findings for more than six months, prompting a protest in July 2014.

The Sansoucy study found that a takeover of American Water’s assets in local communities by eminent domain could cost as much as $80 million, which would have to be bonded. The WASENC board voted against a public takeover in 2016, Reinhardt said, because there was no evidence to suggest that it would save ratepayers money, and noted that service would likely cost them an average of $73, or 11.6 percent, more per year over the first three decades of the takeover.

The State Legislature had created WASENC in 1991 to determine whether a public takeover of New York Water Service Corporation, the private company that provided water to the region at the time, made economic sense. Aqua America took over New York Water Service, and then American Water Works Company took over Aqua New York, the Aqua subsidiary responsible for the area. American Water Works now provides water to communities including Merrick, Bellmore, Wantagh, Seaford and Massapequa Park through NYAW.

— Previously reported in the Herald

The long-awaited legislation to create a pathway for the public takeover of New York American Water — a private water supplier serving ratepayers in Merrick, Bellmore and other Town of Hempstead communities — has been signed by Gov. Kathy Hochul.

"Water is a necessity that every New Yorker should have easy, affordable access to," Hochul said in a statement. "The historically high rates charged by New York American Water could be reduced through a public takeover of the system, and these new public water authorities give the local governments the legal vehicle they need to pursue the public option."

The bill passed unanimously in the State Legislature in June, by counts of 63-0 in the Senate and 149-0 in the Assembly.

Rate relief for thousands of customers paying high fees for water service is now closer than ever — but there is still much work to be done, according to State Sen. John Brooks.

The value of NYAW’s assets will have to be determined, Brooks said, an amount that may be up for debate. The company’s infrastructure has been improved through the years, and according to Brooks, many of those improvements were funded — and are now owned by — ratepayers, which will affect the company’s overall value.

Funding will also need to be allotted, which may be worked into the state budget by Hochul.

NYAW’s operations could also be taken over by an existing municipal entity, such as the Suffolk County Water Authority, which Brooks said he has been looking into. While the Authority might need additional staffing, with its expertise and equipment, SCWA could complete an efficient, and possibly faster, takeover of operations.

A similar situation may happen on the North Shore, where the Massapequa Water District may take over NYAW’s operations.

Despite the work that still needs to be done, one thing is certain, Brooks said: High water rates have lasted long enough. “We have lived for too long a time with excessive rates,” he said. “I do not believe that we should ever tax water, which is a natural resource required for life.”

Brooks said he plans to introduce legislation that would disallow taxes on water and natural resources. In New York, he added, 4 percent of the state’s population is taxed for its water.

“You go to the supermarket and buy a case of water — that’s tax-free,” Brooks said. For those with private suppliers like NYAW, “if you just flush the toilet, you were just charged a tax.”

“I’m not sure why it took so long,” said Dave Denenberg, a co-director of Long Island Clean Air, Water and Soil and an advocate of the bill. “It’s an important step — but it also feels like déjà vu.”

The Town of Hempstead conducted a feasibility study of a public takeover of NYAW in 2013, and concluded that it could cost the town as much as $80 million (see box). Denenberg contended, however, that a public takeover would save ratepayers and the town money, but to no avail, and the effort ultimately failed.

“Everyone is going to have to hold Town of Hempstead and the Nassau County Legislature’s feet to the fire,” Denenberg said.

He added that over the past three months, his water bills for his Merrick home have been $448, $473 and $396 — a total many times higher than what a typical public water customer would pay in an entire year.

As for who would serve on the board of the South Shore Water Authority, Denenberg and LICAWS co-director Claudia Borecky both suggested that it be led by civic-minded leaders with backgrounds in finance, environmental work or water management. “Everyone should hold them responsible to appoint people who will be open, honest and nonpolitical,” Denenberg said.

“Hopefully the Town of Hempstead sees where we are — close to an improvement to customer service,” Brooks said. “Are they going to serve the taxpayers of the area? There’s no reason not to do it.”