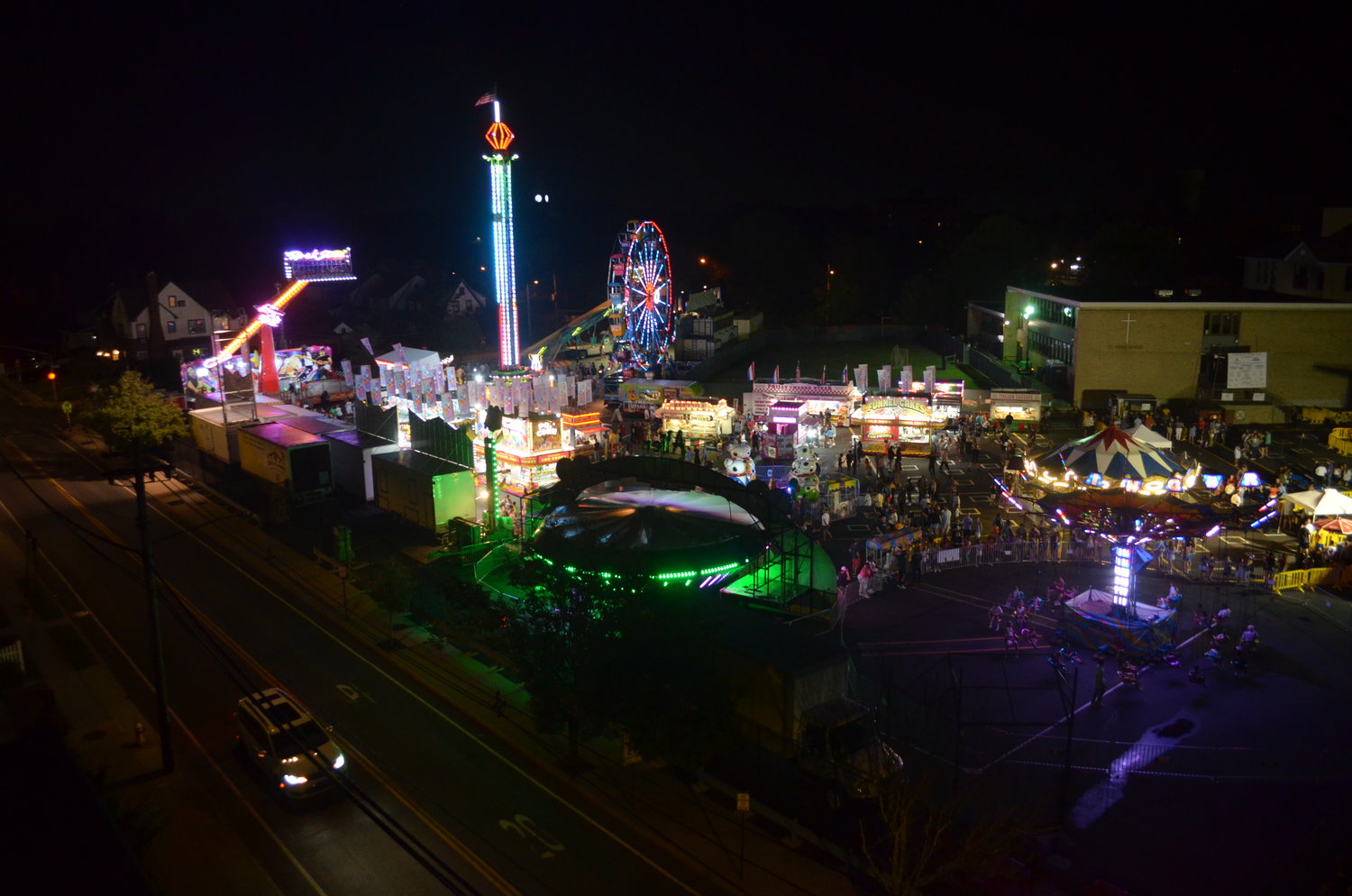 The view of the 2022 St. Agnes Bazaar from the roof of the Rockville Centre Tudor.
Tim Baker/Herald 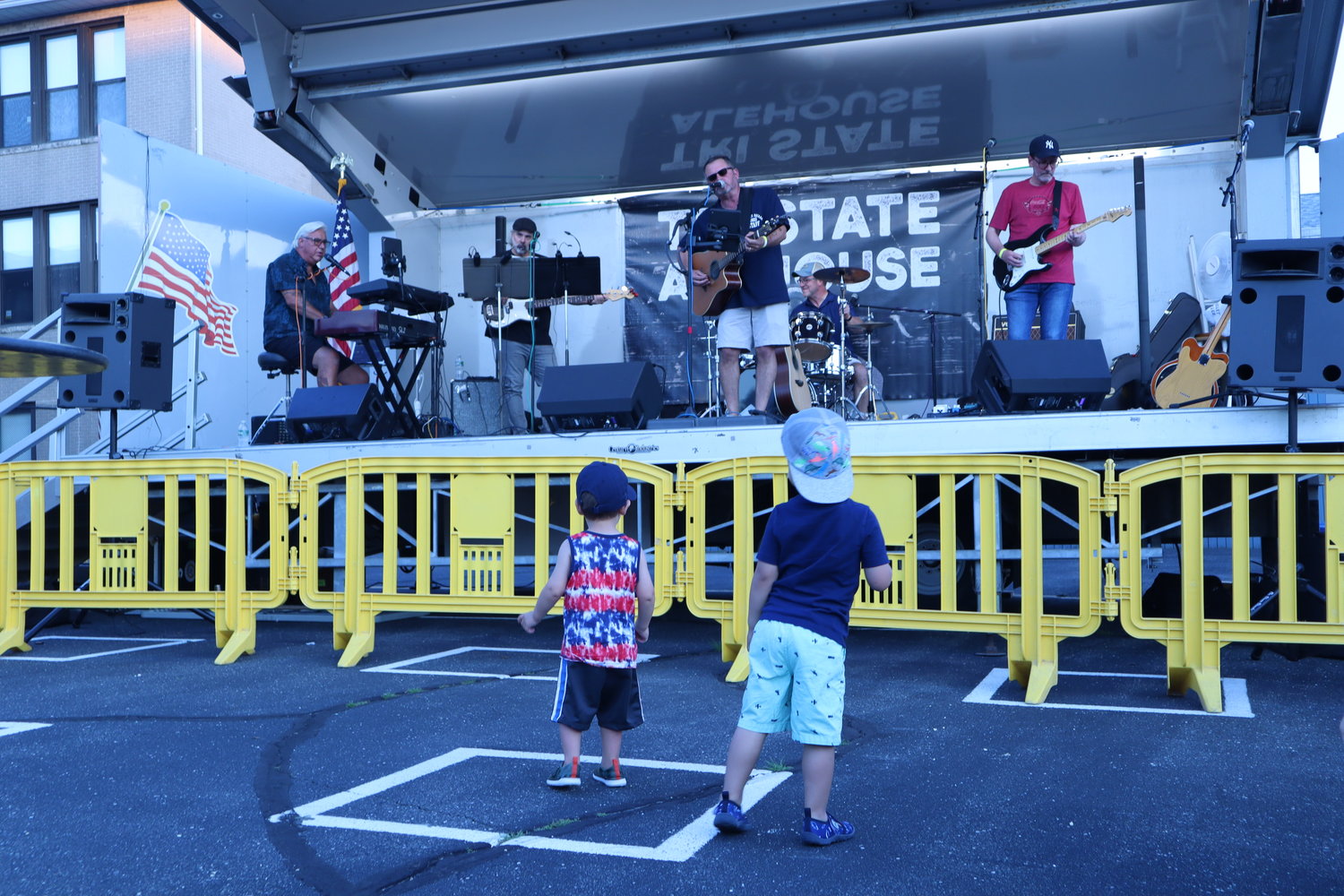 A couple of young attendees dance to the tunes of Tri State Alehouse on Saturday.
Tom Carrozza/Herald 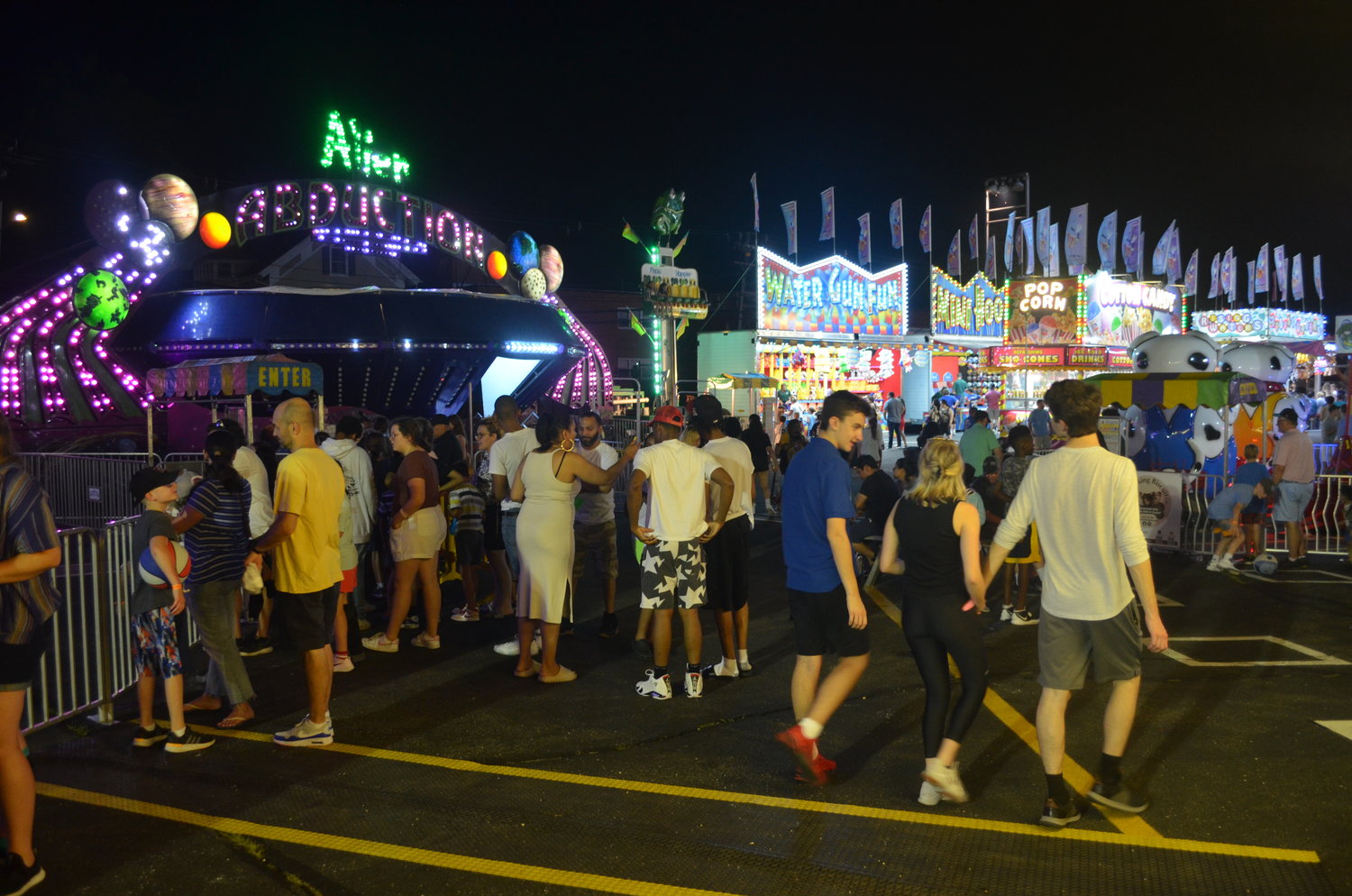 People from all over Long Island came to enjoy the games and rides provided by Newton Shows and the St. Agnes Parish.
Tim Baker/Herald 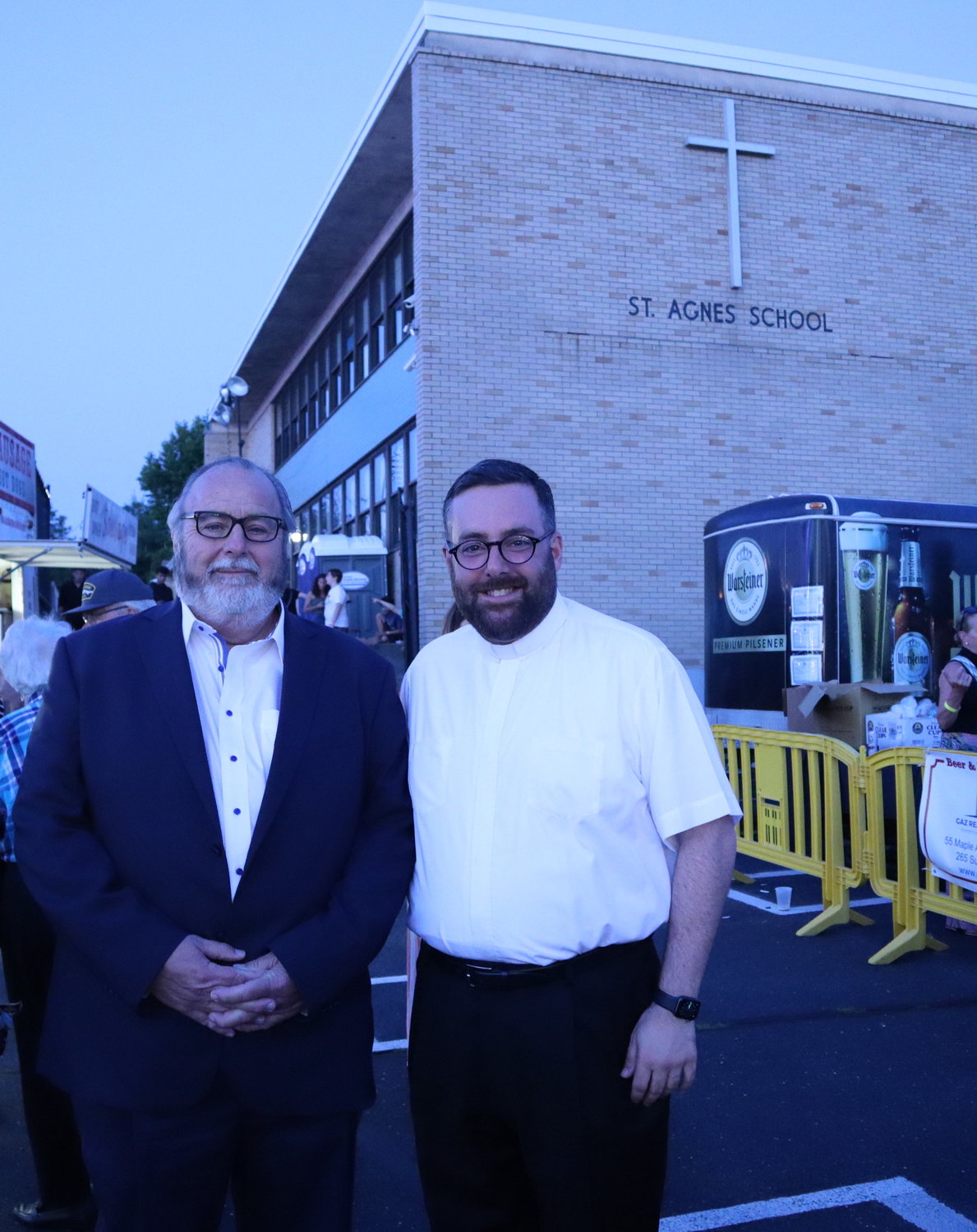 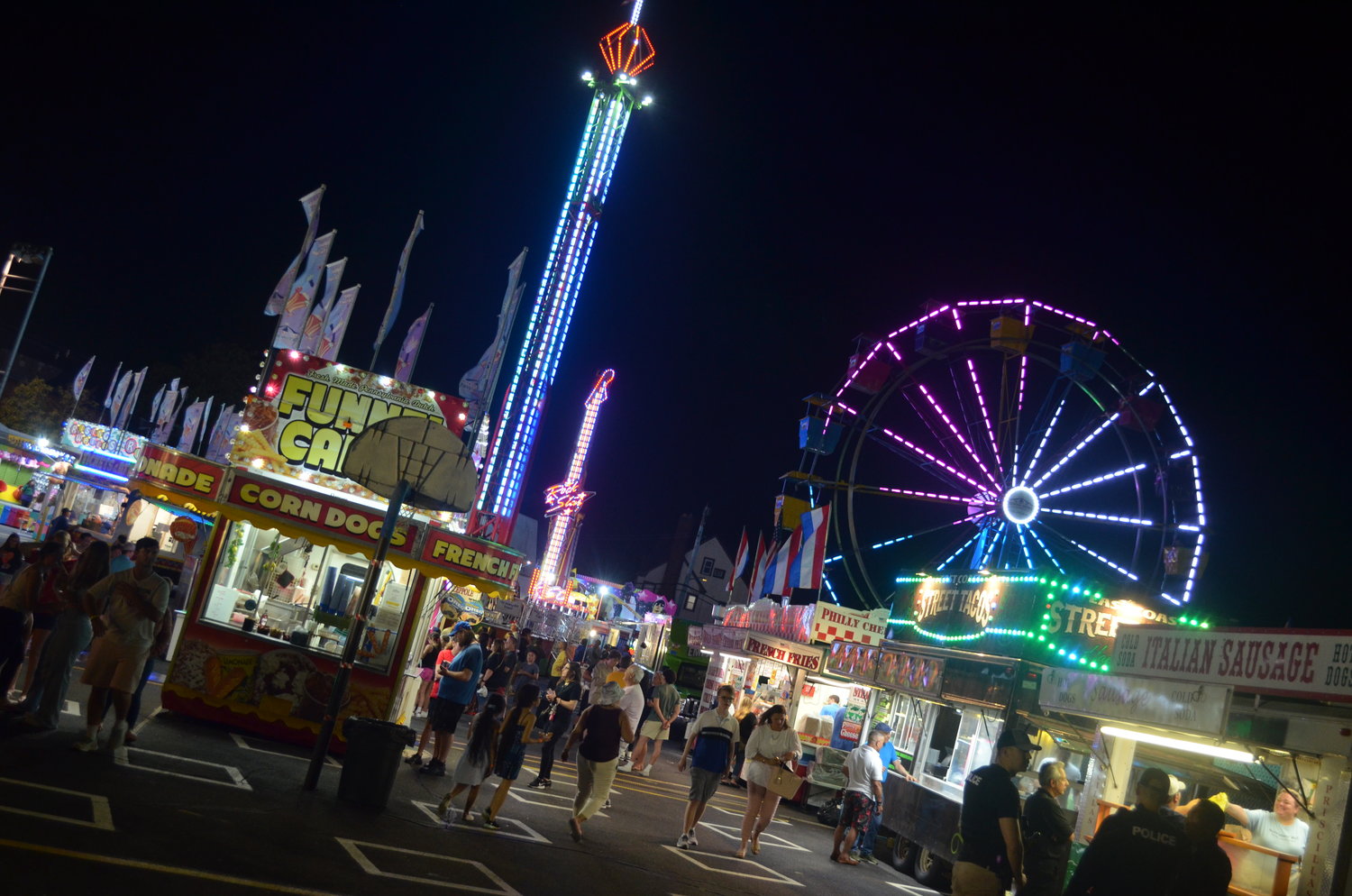 The St. Agnes Bazaar retuned after five decades away but didn't miss a beat, as attendance soared over the three days.
Tim Baker/Herald
Previous Next
By Tom Carrozza

From June 24 to 26, St. Agnes Cathedral brought back a hidden gem from its past: the bazaar. For the first time since the 1970s, the blacktop behind the elementary school was awash with neon lights, carnival games, food, music, and more as hundreds of residents celebrated one of the village’s largest gatherings since the Covid pandemic started in 2020.

St. Agnes Cathedral’s rector Father Michael Duffy teamed up with some of the cathedral’s parishioners in March to plan this end of school year event for the whole community. The young priest was inspired by a similar event while he was at Our Lady of Lourdes in Malverne.

“This has been my dream,” Duffy said. “For years, I’ve wanted to have an event where people can come together and have a positive experience with the church but also to have fun together.”

Duffy was praying for good weather and got exactly what he hoped for with three beautiful days in the sun.

The bazaar planners reached out to carnival operators Newton Shows and the Town of Hempstead to provide the games, rides, and in the case of the latter the Showmobile for the musical acts.

Those musical acts took no money from their appearances to help the bazaar bring in as much money as possible to help both the parish and the school continue their work in ministry and education, respectively. Rockville Centre resident Jonathan Crist organized several different acts, including his own band Tri State Alehouse and his sons James and Neal Crist with their friend Jack Megale, to provide music for the whole weekend.

“I have deep respect for all these groups that wanted to do the right thing for the community and the parish. It’s a sacrifice and a financial cost for them,” Crist said. “But, if you see how everyone is enjoying themselves, there’s a smile on their faces and it’s worth it.”

Pat O’Brien, a longtime resident and parishioner, served as the facilities manager and gathered volunteers. Dozens of local businesses also joined in the fun by providing tables and funds for the program, school, and cathedral.

“It was very humbling to be part of this and to see the response we’ve had,” O’Brien said. “I was one of those kids running around the cathedral parking lot in the seventies, but we didn’t have nearly what we have here today with the rides, food, and live entertainment.”

Already, O’Brien said the planners of this year’s return to the bazaar are formulating what can be done to keep this revamped tradition going.