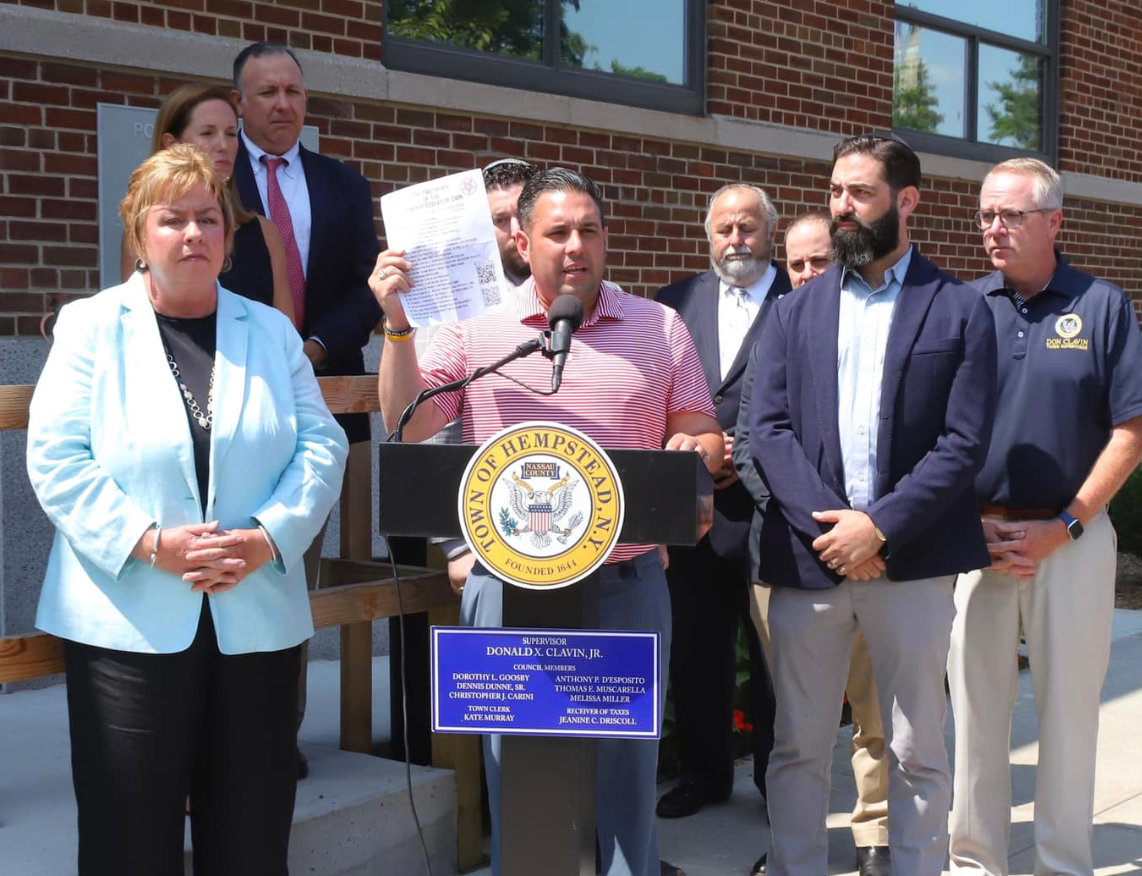 Electeds from both Rockville Centre and the Town of Hempstead are calling for a formal investigation into what they described as antisemitic leaflets left on the doorsteps of families living in Rockville Centre.

Supervisor Don Clavin, Councilman Anthony D’Esposito, and Mayor Francis Murray were also joined by Jewish leaders during a new conference Friday morning to reaffirm their commitment to safeguarding the Jewish community, as well as reaffirm the town’s zero policy for hate in any form.

“There’s just everything in this village for anyone who lives here and anybody who wants to come and visit,” Murray said. “But today, I stand here to say that hate has no home in Rockville Centre. The board of trustees and I, along with our residents, are infuriated and disheartened to see hateful propaganda being distributed in our village.”

The flyers — which also were reported in Oceanside earlier this week, according to published reports — claimed the Biden administration was controlled by a “Jewish cabal.”

Clavin decried people waking up to find the flyers at their door“with clearly antisemitic messages on it.”

“Every resident should know that we are unified. Let’s hold these people accountable. Let’s send the message that we’re not going to tolerate it in our beautiful communities.”

D’Esposito, who also is running for Congress, called out hate of all forms.

“It’s not just about acts of antisemitism and hate against the Jewish community,” he said. “We need to stand up against hate against all people. Whether it’s racial, religious, political, it doesn’t matter. The world that we live in deserves peace.”

Rabbi David Lerner from Congregation B’nai Sholom-Beth David, believes these kinds of flyers are becoming a “growing trend throughout our country.”

“This is a community of trust and love,” Cohen added. “Hate not only doesn’t have a place here, we refused to let it have a place.”

There is a chance those who distributed the flyers could face criminal charges, Clavin said, and that the investigation was ongoing. Potential charges could range from a hate crime to aggravated harassment, although it wasn’t clear how First Amendment rights played into what was shared.

Other electeds joined the chorus of condemnation throughout the day Friday as news of the flyers circulated.

“Under no circumstances can we remain silent in the face of the vile filth being disseminated by extremist groups seeking to poison our community with their repulsive rhetoric," state Sen. Anna Kaplan said, in a statement. "The antisemitic trash being spread around Rockville Centre and Oceanside this week is just the latest in a long string of recent incidents impacting our community that are driven by antisemitism and hate, and we all need to stand together and send a strong message that we will never accept these groups or their shameful, un-American beliefs in our community.”

Gov. Kathy Hochul also weighed in, tweeting on Friday that she was disgusted by the flyers.

“These offensive tropes and despicable conspiracy theories have no place in our state,” Hochul said. “We stand with our Jewish neighbors, and continue our fight to root out antisemitism wherever it rears its ugly head.”