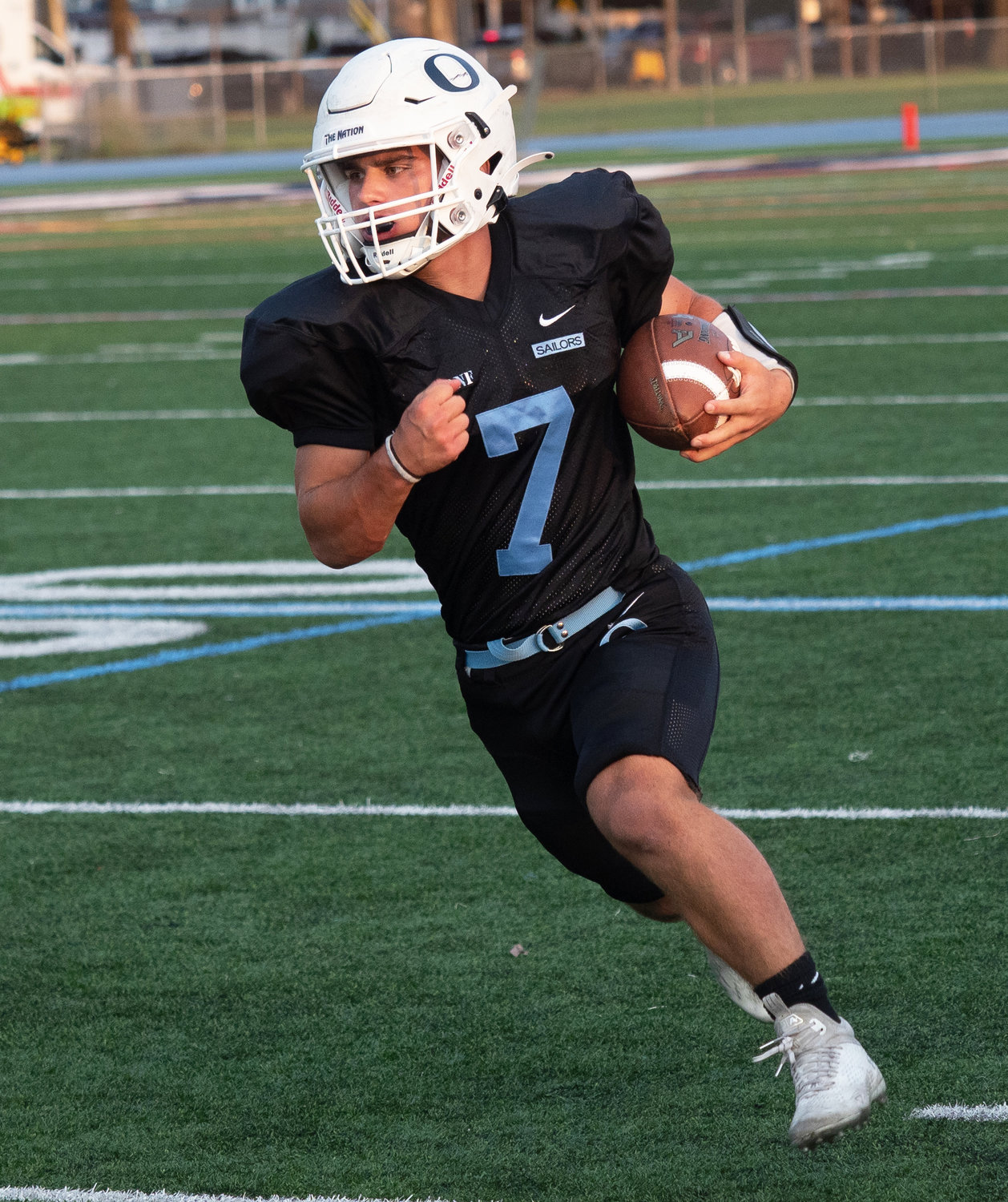 Junior Nicky Cairo had a touchdown run in Oceanside’s season opener and has taken some direct snaps to provide the offensive with a different look.
Eric Dunetz/Herald
By Tony Bellissimo

Oceanside football finds itself in unfamiliar territory heading into this Saturday’s Conference I matchup at Plainview.
The Sailors, who played in each of the past two county finals, are in jeopardy of losing three consecutive games for the first time since 2014 and for only the second time during head coach Rob Blount’s 14-year tenure. Last Friday evening they were unable to get on the scoreboard in a 34-0 loss to visiting Farmingdale.
The Dalers, who opened with a 48-0 victory over Valley Stream Central, used some big plays to drop Oceanside to 0-2. Farmingdale scored on plays of 19, 76, 28, 34 and 40 yards, with Dillion Mehta catching two of quarterback Anthony Licci’s three touchdown passes.
“We’re going to be a work in progress throughout the season and each game we want to see growth,” Blount said. “We feel the finished product is going to be a lot better than the opening product. We have a bunch of young guys getting opportunities and we’re hoping to be at full strength in the next week or two.”
The Sailors have played without two-time All-County linebacker/tight end Logan Lyson, who suffered torn thumb ligaments during the second week of practice. Blount is hopeful Lyson can return to face Plainview, or worst-case scenario Oct. 1 against Syosset for Homecoming.


“Logan’s not only a tremendous two-way player but he’s also a two-year captain,” Blount said. “He means a lot to the team. We definitely need to get him back.”
Freshman quarterback Shane Harmon completed 9 of 13 passes for 85 yards and had 5 straight completions late in the second quarter during Oceanside’s best drive of the night as it was looking to score for the first time in the opening half this season. However, an errant snap led to a Farmingdale fumble recovery at its own 30 and appeared to take the wind out of the Sailors’ sails.
“We’ve shot ourselves in the foot in each of the first two games,” Blount said. “We need to do a better job sustaining drives if we want to be successful.”
In the opener, also at home, Oceanside lost 19-13 to Hempstead. Tigers quarterback Jakkai Stith rushed for two touchdowns and threw for one, and Dwayne Meadors had 135 yards on the ground on 13 carries. The Sailors scored on senior Cole Parker’s 24-yard run in the third quarter and junior Nicky Cairo’s 1-yard run in the fourth.
Cairo has taken some direct snaps behind center to give defenses a different look.
“Hempstead is a physical group with a talented quarterback and tough running back,” Blount said. “We fought back from a 19-0 deficit and made it a one-score game with about 7:30 to go. We had plenty of time but Hempstead went on an 18-play drive with 6 first downs to ice the game.”
Hempstead followed with a 27-0 victory over Plainview in Week 2.
Blount didn’t hesitate to tab the upcoming game as a “must win.” Kickoff is 2 p.m. “There’s no doubt we need to get in the win column and go into Homecoming with some momentum,” he said.