‘He’ll always be in my heart’

After a long struggle with cancer, Philip Califano, 9, dies 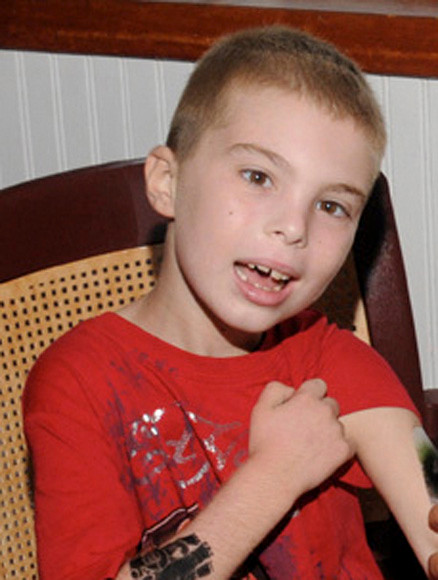 Philip at a 2010 fundraiser his family held.
Penny Frondelli/Herald
By Alex Costello

In so many ways, Oceanside resident Philip Califano was an average boy. He loved going to Gamestop with his aunt to buy games for his Wii. He loved NASCAR and wrestling (John Cena was his favorite wrestler).

He was a happy boy who loved to laugh and smile. He liked to swim and play with his cousin, Pia.

And in many other ways, Philip was old beyond his years, dealing with things that would make people five times his age cry.

Since he was six, Philip had fought an inoperable brainstem tumor. He was treated at many different clinics. Even when they were told it was hopeless, Philip and his family didn’t give up. They crossed state lines and national borders, spending tens of thousands of dollars on uninsured treatments.

In his last days, to the delight of his family, Philip’s latest treatment was working. His tumor was shrinking and his cancer cell count was decreasing. He couldn’t wait to get back to School 4 and surprise all his friends with his recovery.

But he died on Oct. 17 in the hospital. Not from his tumor, but from a blood clot in his brain. He was 9 years old.

Philip was born on Feb. 9, 2003, to Edualdo Califano and Lisa Cornell. He was just 6 when he was diagnosed with a brainstem glioma. Due to the nature and location of the tumor, doctors were unable to operate on it.

For two years, Philip was treated at St. Jude Children’s Research Hospital in Memphis, Tenn. The treatments didn’t work, so his parents took him to the Burzynski Clinic in Houston, where he was treated from February 2011 to April 2012.

When his cancer worsened, his family was referred to the Rubio Cancer Center in Tijuana, Mexico, where Philip spent his last days.

“In Tijuana, Mexico, his tumor shrunk 40 percent and his cancer count went from 90 down to 37,” said his aunt, Dominica Califano. “It is a miracle place for people to get cured. It’s an amazing place.”

Beginning with his diagnosis, Philip’s family, out of necessity, went public with his disease. His parents were unable to pay for many of the procedures, and turned to the community for help. There were periodic fundraising benefits at restaurants in Oceanside, Island Park and neighboring communities. Many local restaurants had jars to collect money for him, and they were usually filled to overflowing.

“We made it happen, wherever he had to go,” said Dominica. “He wasn’t able to fly to Mexico, so we rented an RV. It took them five days to drive down to San Diego, California. And from San Diego, the facility he was going to picked him up in a van and took them over to Tijuana and the facility.”

The treatment in Mexico was helping. Philip’s tumor shrank, and he regained the ability to speak. He even started swimming. “We mailed his goggles down there, and he went swimming in the pool,” said Dominica. “He was like a fish.”

Philip’s death was as unexpected as his initial diagnosis. “We were shocked,” said his other aunt, Anna D’Amaro. “His mother asked him just two seconds beforehand, ‘What do you want to eat?’ And he said, ‘Just the broth from the chicken soup.’ She turned and he was just staring straight out, and he went. They tried to revive him, but they couldn’t. And that was it.”

Philip is survived by his parents, a brother, Dominick, his aunts and an uncle, Frank D’Amaro. Funeral services were held on Monday. The family asks that, in lieu of flowers, donations to help pay for Philip’s medical bills be sent to Philip Califano, P.O. Box 658, Oceanside, N.Y. 11572.

“He’s our little angel in heaven now, and he’ll be watching over all of us,” said D’Amaro. “He was an angel here and he’s an angel there. What can I say? I miss him. I’ll always miss him, and he’ll always be in my heart.”