Keeping their eyes on the skies and the binoculars handy

Retired OHS teacher, a devoted bird watcher, leads a walk on the wild side in Oceanside 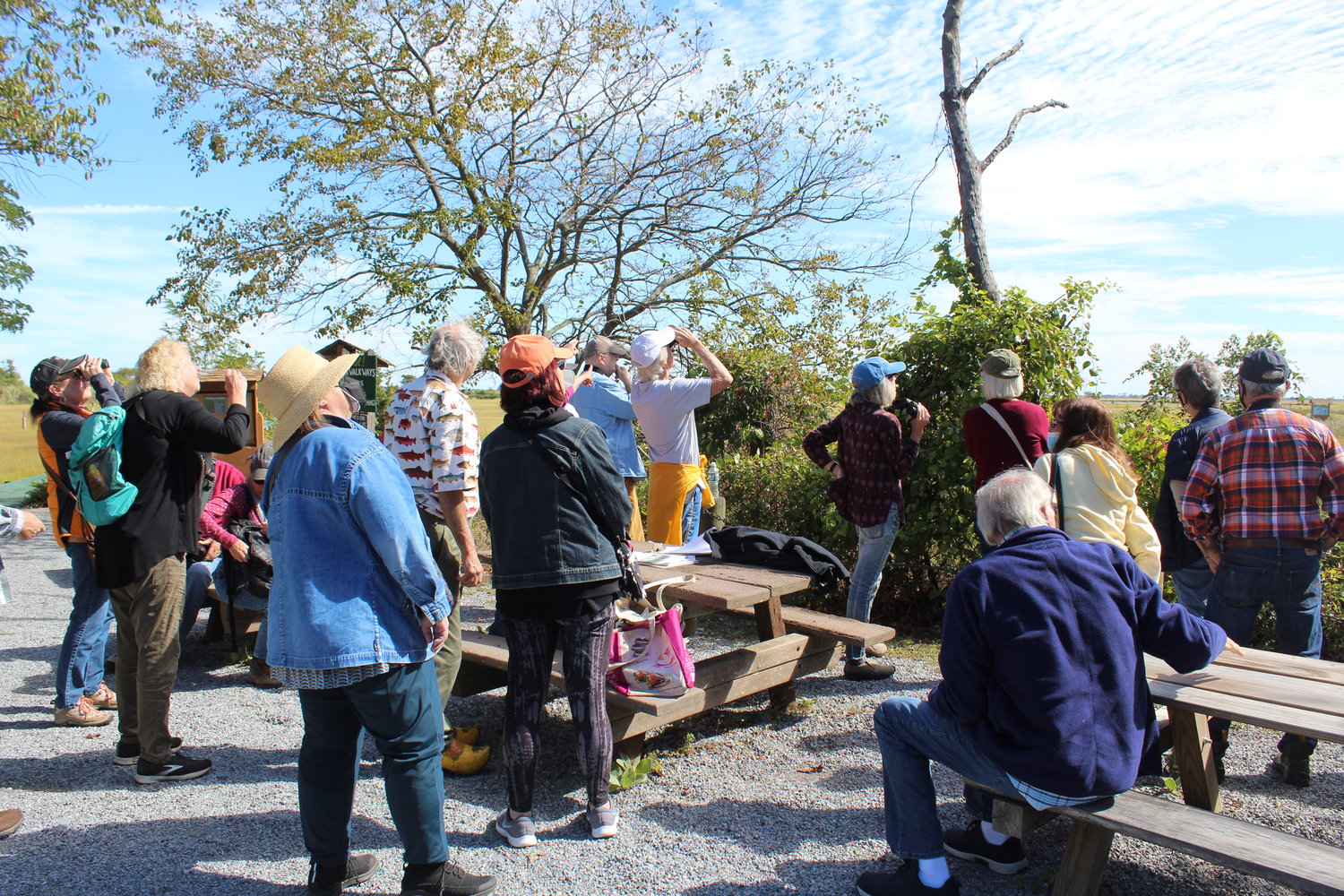 Peter Martin, in yellow with binoculars, above, directed the bird watchers’ gazes to a bird in the sky.
Karina Kovac/ Herald 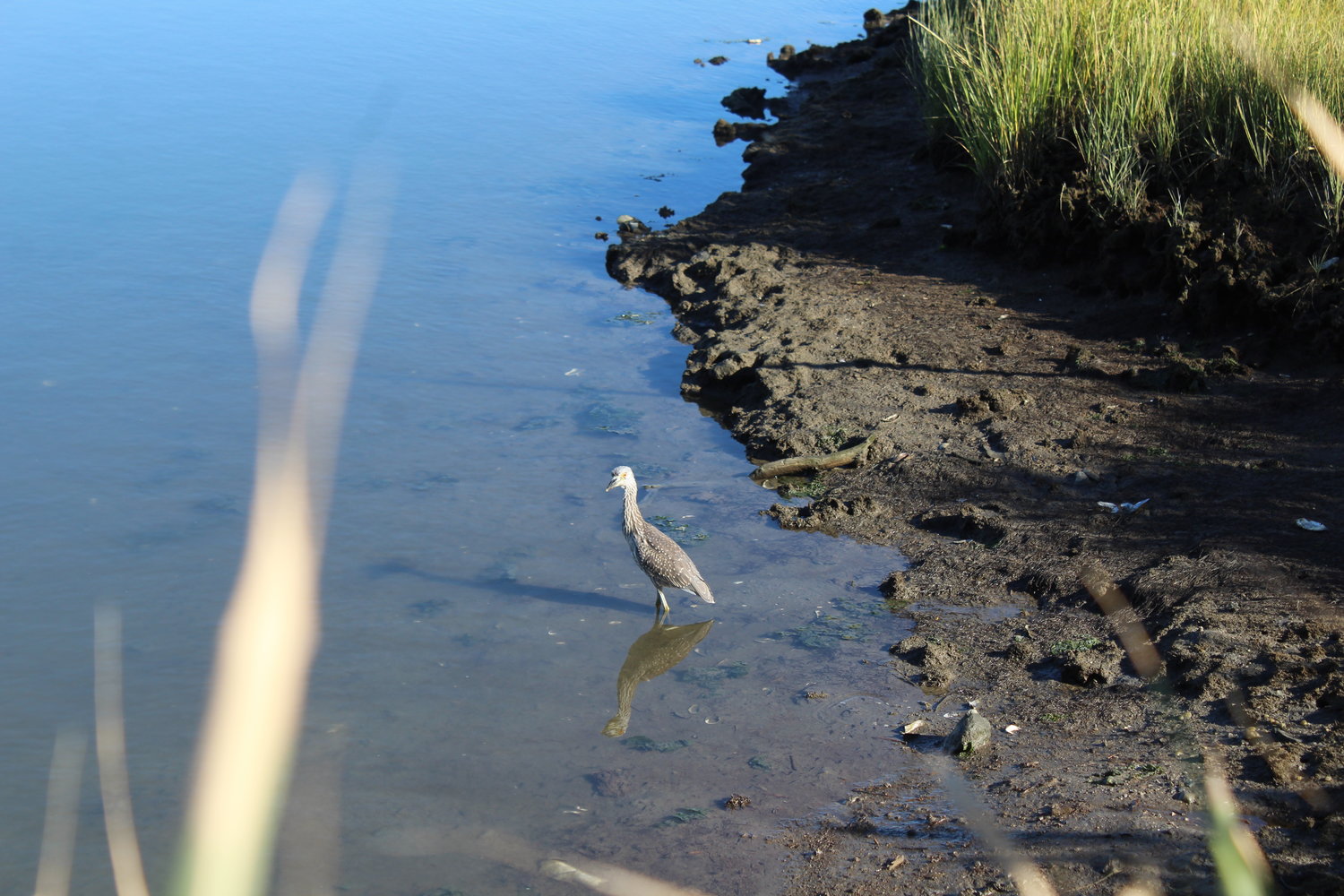 Marshland, birds and wildlife, flora and fauna — Peter Martin, 72, is an encyclopedia of it all. A bird watcher for 55 years and an environmental science teacher at Oceanside High School for 33, Martin fills much of his retirement by leading nature walks. He led one such group in a Coastal Ecology Exploration walk on Sept. 24, along the North Shore Land Alliance and Oceanside Marine Nature Study Area, on Slice Drive, just north of Oceanside Park.

During the exhilarating walk, more than a dozen participates kept their eyes on the skies to spot local wildlife, and caught sight of such majestic marvels as the crowned night heron, as well as greater yellowlegs and common egrets. Over the course of the three-hour walk, bird watchers new and old learned a great deal about the diverse wildlife that can be seen locally — if you’re looking for it.

Martin, the group’s guide, pointed out birds, as well as plants, on what turned out to be a warm day. Although he has been observing wildlife for decades, the enthusiasm of others is always new and exciting for him, he said, and he delights in.

“You kind of relive that through their experience, the excitement of seeing a clapper (for example), and I’m kind of amazed, how could that be?” Martin told the Herald, but the experience is new to many. “You get kind of jaded when you’ve seen a lot of things and you get used to it. But you shouldn’t be, and that’s one way of keeping it fresh, is seeing other people’s pleasure in seeing things. You connect with that feeling again like it’s the first time.”

As a teen, Martin was more of a fisherman, but when he was in his 20s, bird watching became his focus. Over the years he has become a naturalist of more general interest, studying clouds as well. He taught biology and earth science at the high school until his retirement in 2005, but he doesn’t want to stop teaching about the environment, which is why he leads walks around Long Island.

Jane Jackson, director of stewardship at the North Shore Land Alliance, said the walks help participants develop an appreciation for the area’s natural resources, and help raise awareness of land conservation, one of the organization’s biggest goals. “For over 20 years, we’re working to protect land and educate people about the importance of protecting nature,” Jackson said.

One walker, Laurie Raisher, said she feels most comfortable out in nature, and takes pleasure in having the beaches to herself in the oncoming colder months. Though she often prefers to be alone, Raisher said, taking part in the group walk made her appreciate how many like-minded people are out there.

“I feel at home in nature, and I forget that people love it as much as me,” she said. “I really like learning more and more. Sometimes these naturalists who run these things are really amazing.”

Noting the richness of the scenery in marshes, another watcher, Desiree Benn, marveled during the walk at how natural elements fit together picturesquely. “I love how the dead wood sticks out from the living grass,” she said. “Can you imagine one (bird) perched right there? You can’t paint a picture that’s more beautiful than that. Anything compared to that is a Campbell’s Soup can.”