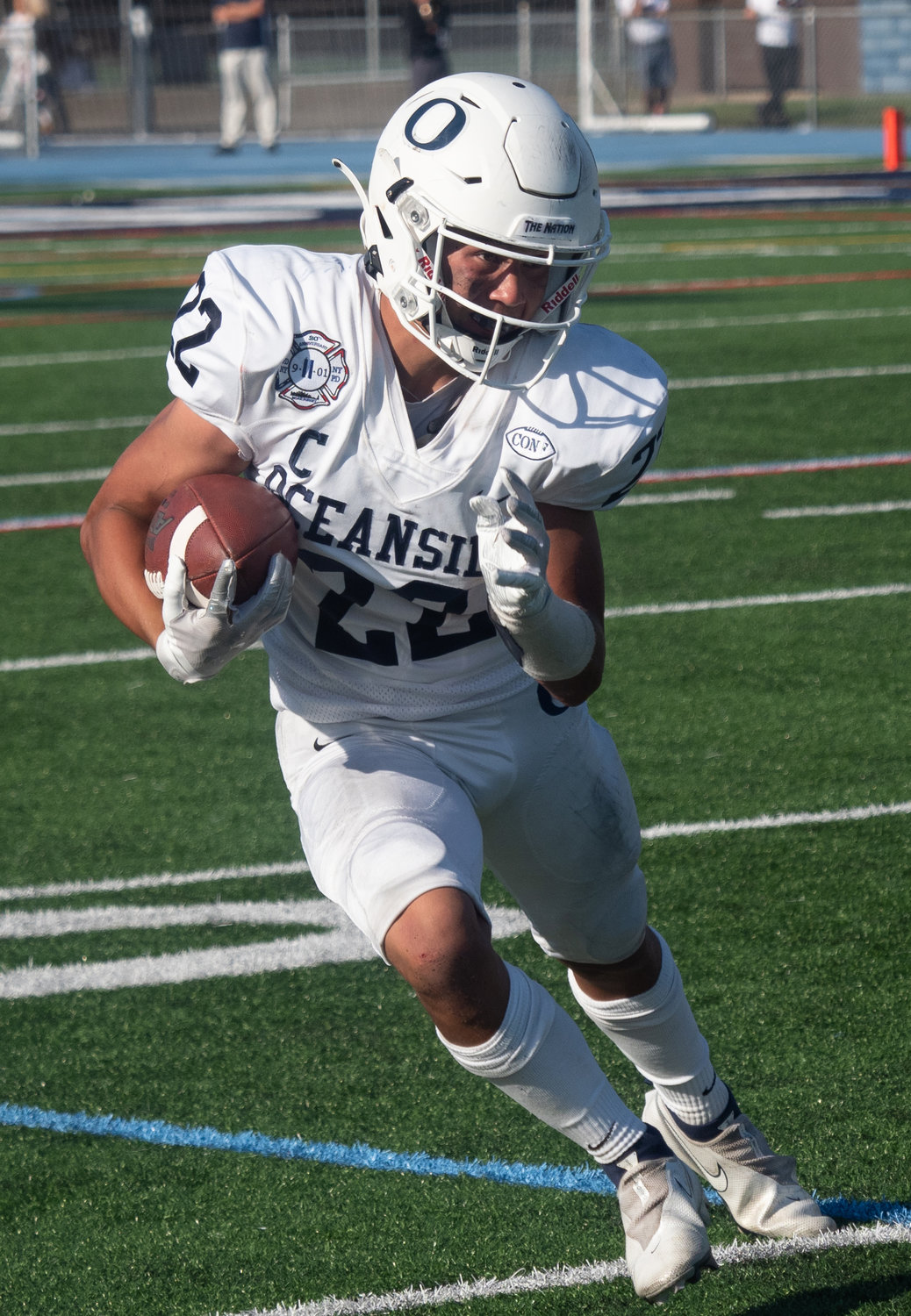 A last-minute touchdown drive to close the first half on Saturday gave Oceanside a one-point lead over visiting Massapequa in a much-anticipated Nassau Conference I football showdown between the top two seeds that was ultimately determined by turnovers.

The Sailors committed three costly giveaways in the second half, and the defending county champion Chiefs turned two into touchdowns on the way to a 26-21 win before a standing-room-only homecoming crowd of approximately 2,500 at Oceanside.

“This is the second game in the past three weeks we had problems holding onto the ball,” Oceanside head coach Rob Blount said. “Give Massapequa credit, but we have to be better. We can’t turn the ball over like that and expect to win big games like this.”

McKee directed a 51-second scoring drive to make it a one-possession game again after Heidrich gave the Chiefs a 26-14 cushion with his 4-yard touchdown run. Senior Michael Mecca’s 15-yard touchdown reception made it too close for comfort for Massapequa, which had to withstand the ball in McKee’s hands for the final 26 seconds.

“We weren’t counting anything until the clock hit zero,” Massapequa head coach Kevin Shippos said. “We’ve had some great battles with Oceanside in recent years and both teams have come out on the wrong end. Today we were able to take advantage of our opportunities. We made big plays in big spots.”

Massapequa, which defeated the Sailors 36-29 in last season’s county final May 1, converted all eight of its fourth-down attempts Saturday including two on a game-opening drive capped by Heidrich’s 5-yard scoring toss to senior Michael D’Alessandro.

Oceanside pulled even early in the second quarter with an unlikely fourth-down conversion with McKee hitting senior Ronnie Kraemer for a 19-yard touchdown on 4th-and-11. The teams then traded touchdowns in the final 90 seconds of the half, with junior Nicky Cairo securing a 2-yard toss from McKee to cap an 80-yard drive. The Sailors led 14-13 at halftime following Frank Morizio’s extra point.

Momentum shifted on the opening snap of the second half when following a McKee completion to the 35, the Chiefs recovered a fumble. Ten plays later, senior Jared Howes secured a 13-yard touchdown pass from Heidrich and Massapequa took the lead for good at 20-14.

Senior Luke Ciolino had an interception and D’Alessandro’s a fumble recovery in the fourth quarter for the Chiefs, who are the only remaining undefeated team in Conference I.

Oceanside will try to get back on the winning track when it hosts Port Washington on Friday at 6 p.m.