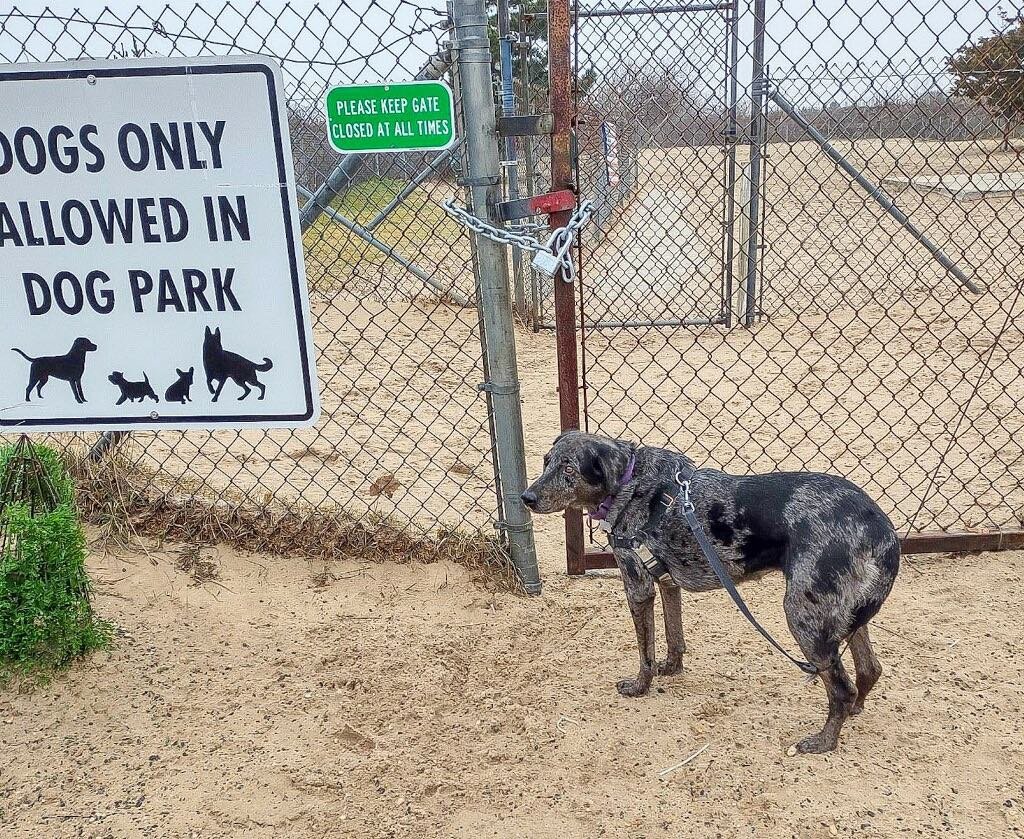 Patty Liguori’s dog, Luna, stood forlornly outside the locked gate at Nickerson Beach dog park. Although no one could know what was going through her mind, it was evident that Luna didn’t understand why her favorite recreational haunt was closed.
Courtesy Patty Liguori
By Karina Kovac

For 18 years, Steve Kritzberg has brought his dogs to the park dedicated just for them at Nickerson Beach. He’s part of an early morning social group, and then comes back to socialize with afternoon and weekend pet owners as well.

There, Kritzberg meets up with other dog lovers to shoot the breeze, all while their four-legged best friends have the times of their lives running around free.

A tired dog is a happy dog, Kritzberg says. But that changed on a recent trip, when he found a fence and closed gate — the first time he can remember the park being closed, except for when the remnants of Hurricane Sandy hit Long Beach.

Kritzberg waved down a police officer he found patrolling nearby, hoping for some answers while his dog waited patiently in the car. Instead, he got a warning to stay away.

“As soon as I entered the gate, he turned on his light, did a U-turn, and came at me,” Kritzberg said. The officer was visibly upset, telling him the park is closed. And if Kritzberg stuck around any longer, he’d get a ticket.

That’s how Kritzberg and many others learned the dog park concession rights were sold by Nassau County officials to a company known as the Dover Group, which closed the park, with no public plans on when — and how — it might reopen.

“It was just kind of a kick in the gut, you know?” Kritzberg said. “We have a really nice community of people I’ve known 18-plus years. We’ve gone through all kinds of things — deaths, having funerals for friends that went to the dog park, birthday parties, Christmas and holiday parties. It’s just become a very nice community.”

That’s because the park is more than just a park. It’s a gathering place for dog lovers to meet and chat, bird watchers to wait and hopefully catch a glimpse of a snowy owl, and other naturalists to enjoy.

But there were signs of change coming, Kritzberg said. Dog walkers noticed garbage starting to pile up in trash cans. When the garbage was finally removed, so were the cans removed.

Then, the park closed.

Officials typically only close one public park for the winter, and the one at Nickerson Beach isn’t it. No one from Dover Group — which took over maintenance of the park, cabanas, pool and recreational vehicle center — returned calls seeking comment.

“The easy answer for him was, ‘I’m just going to close the park and then I don’t have to deal with the garbage,’” Kritzberg said. “That’s my theory.

“I’m just so very fed up. It’s taking me away from a community that Saturday and Sunday mornings, we go down there in blizzard conditions and we go down there for a hour or just for an hour-and-a-half. We sit there. We have coffee. We catch up on chewing the fat. And it’s just been yanked. The rug has been yanked out from under our feet. It’s pretty hurtful.”

Jack Dicken has been visiting the park from Freeport since he retired in 2000. Catching his fellow dog walkers just after sunrise is important, because many of them are the only faces he might see all day.

“This is the only time they talk to other people,” Dicken said. “Like, it’s my wife and I. We’ve been together 47 years — even more. And other than my wife, these are the only other people I talked to generally, every day. So, it’s a social thing also with the dogs itself.”

Nassau County Legislator Denise Ford has reached out to the Dover Group trying to schedule a meeting. In the nearly two decades she’s been in office, Ford says she can’t ever recall any one person or group taking control over the entirety of a county-owned park facility.

So why it’s happening with Nickerson Beach is a mystery to her.

“Technically, this is a county park, and the county still owns it,“ Ford said. “We are still basically responsible for the park. But last year, during the rules committee — which I was not a part of — they opted to allow the Dover Group to run Nickerson Beach.

“It was our understanding during this hearing that simply they would operate to the extent that residents wouldn’t even be aware of the fact that it was a change in operations. Unfortunately, that is not proven to be true.”

Ford urges shut-out park-goers to contact the parks commissioner as well as County Executive Bruce Blakeman, and let them know their feelings about the closure of the only county park on the barrier island.

“I’ve made some lifelong friends,” Kritzberg said. “Now we’re not allowed to use the park until springtime.”