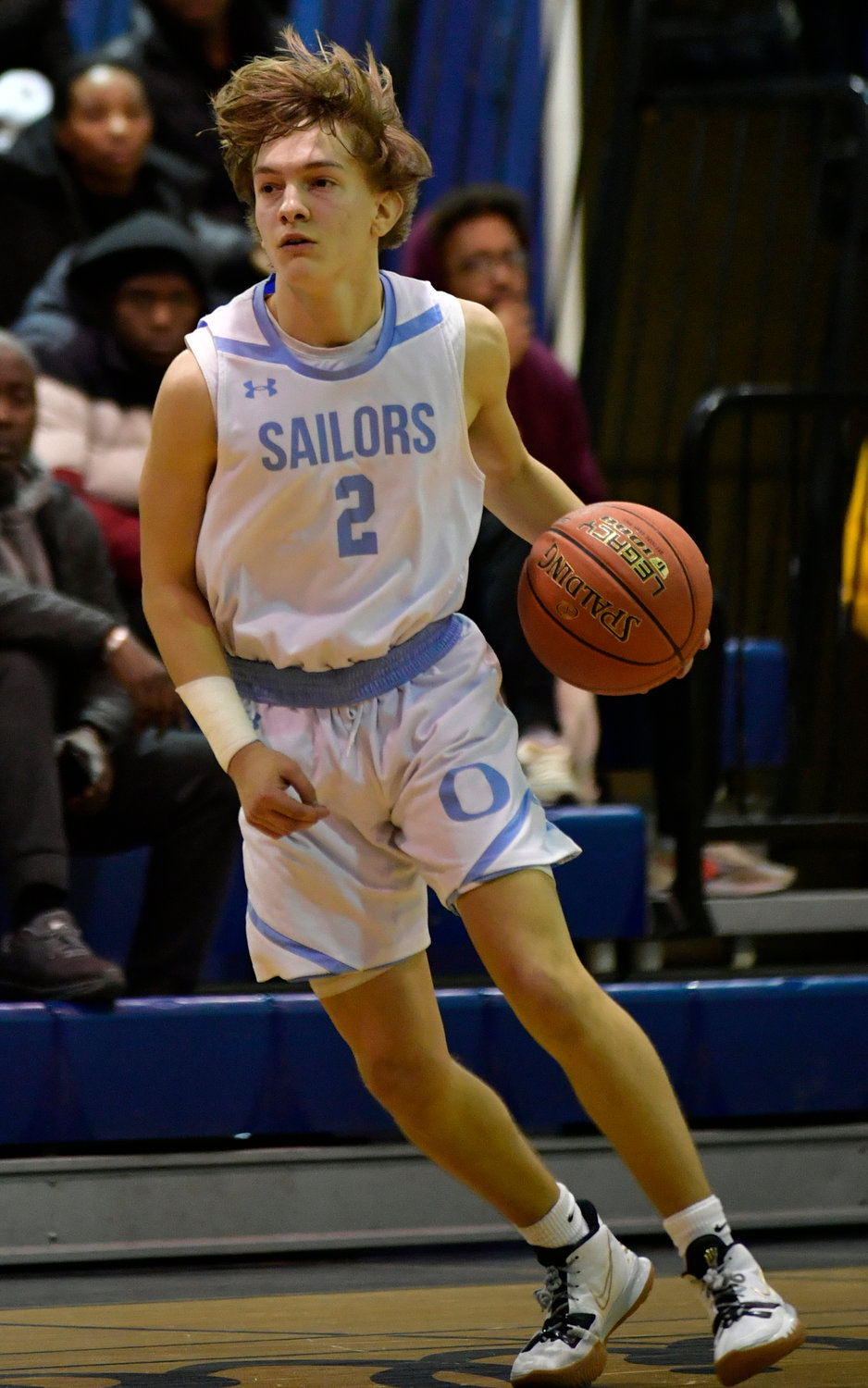 Senior guard Anthony Rodriguez poured in 25 points to lead Oceanside to a runaway victory over Herricks on Jan. 12.
Anthony Hughes/Herald
By Vincent Matula

Coming into its Conference AA2 matchup with visiting Herricks on Jan. 12, Oceanside had just one league victory in five previous tries.

The Sailors put together a dominant second half, which proved to be the difference in their 71-45 victory. Oceanside senior guard Anthony Rodriguez dropped 25 points, providing a much needed spark on offense as the team scored over 70 for the first time this season. A dozen of his 25 came from beyond the arc.

“When he takes good shots, he’s the best shooter in Nassau County,” Sailors head coach Edward Risener said of Rodriguez. “When he gets rolling, there’s not many like him.”

Rodriguez is now leading the Sailors in scoring, averaging just under 15 points per game and has a team high 24 threes. “There’s something special about this team, we always have a spark,” he said. “We know for a fact we want to start fast and that’s exactly what we did coming out of the half.”

Oceanside led by as many as 13 in the opening half, but Herricks responded in the second quarter with 22 points. The Sailors lead diminished to just two points at halftime after they set the tone in the opening quarter..

“We took our foot off the gas a little bit and let them back in the game,” Risener said. “We talked about keeping our foot on the pedal and being the most aggressive team we can be.”

Oceanside, which followed the performance with a victory over Plainview last Saturday, did so by outscoring Herricks 29-9 in the third quarter and tallying 43 points total in the second half. Senior Jacob Raphan and junior Ben Zito reached double figures for the contest, scoring 14 and 12 points, respectively.

“We got back to our pace in the third quarter,” Risener said. “We were able to get some of our shooters going and get some easy buckets.”

Defensively, senior Andrew Zinzi was a noticeable vocal presence for Oceanside throughout the evening and provided plenty of hustle for the club. Zinzi finished with four points on the night.

“Andrew is the heartbeat of our team,” Risener said. “He’s a defensive player in football and brings that toughness and intensity to the basketball court. His assignment is usually the other team's best player and he takes that personally.”

Due to their strong performance in the third quarter, the Sailors were able to go to their bench and get other players into the game. Junior guard Connor Haufler provided 7 points off the bench.

“The beauty of our team is anybody can be our leading scorer any night,” Risener said. “We have a lot of depth and a lot of guys that can be interchangeable pieces.”

The win on Saturday pulled Oceanside to a 7-6 record overall with a 3-4 conference mark. The Sailors will look to build off their victory as they gear up for the final month of the regular season against all Conference AA2 opponents.