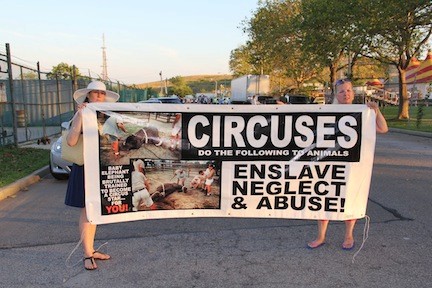 Joy Fieldstadt and Liz Downey walked up and down the street showing circus goers how the animals are treated.
Christina Daly/Herald
By Howard Schwach

Oceanside residents who arrived with their kids in tow to see the Cole Brothers Circus at the Fireman’s Memorial Field in Oceanside on the evening of July 29 got a lesson in democracy even before entering the bit top.

Outside the tent were 10 to 15 protesters carrying signs that read “Circuses enslave, neglect and abuse.”

While most ignored the signs and entered the tent, there were some who took literature from the protesters or turned away and went home.

The protesters were from a group called LION – Long Island Orchestrating for Nature, and its leader, John Di Leonardo, told the Herald that the circus has “a long history of abuse and violations of the state’s animal cruelty act.”

“They use a blow torch to take the hair off elephants, to make they look younger and cuter,” he said. “They use bull hooks and all sort of other instruments to train and control the animals.”

The Oceanside fire companies sponsored the circus, but Di Leonardo decried the fact that the first responders would abuse animals to raise funds.

“We appreciate that the fire department has to fundraise,” he said, “but there is no excuse for their support of this abuse. We hope that they will meet with us so that we don’t have to come back here next year.”

Di Leonardo also complained that the fire department refused them a permit and denied them access to the circus site for their demonstrations.

An Internet check found that the circus was cited in April of 2012 for a number of violations, including improper veterinarian care, abuse by trainers using bull hooks and general neglect and overworking the animals, and was ordered to pay a $15,000 civil fine. The company was also restricted from owning animals and the circus animals presently deployed by Cole Brothers are actually owned by another circus firm.

The circus ran in Oceanside from July 28 to July 30 and was considered a success as a fundraiser by the fire department, officials say.