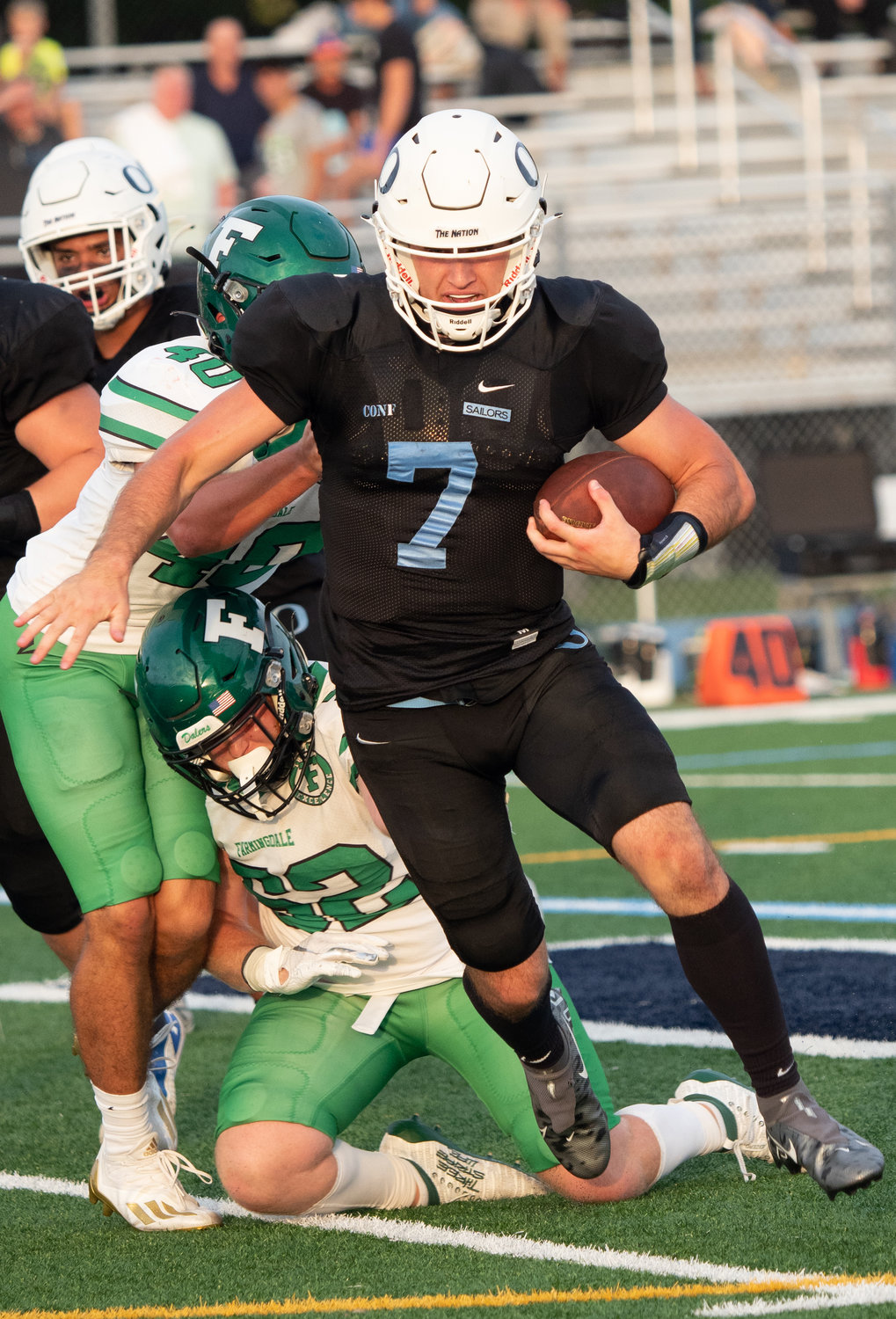 Oceanside quarterback Charlie McKee did plenty of damage with his legs Friday night, rushing for four scores to lead a 31-21 win over Farmingdale.
Eric Dunetz/Herald
By Tony Bellissimo

After a slow start, the Sailors responded and showed their ability to put the ball in the end zone without McKee’s right arm. The Dalers didn’t allow a passing score and had an interception, but it was the legs of McKee, Cole Parker and a host of others leading a 31-21 victory before a standing-room-only crowd.

“We started off a little sloppy, but we cleaned things up and showed we’re not one-dimensional,” said McKee, who has 70 career touchdowns through the air and 7,083 career yards, bringing him less than 1,000 from surpassing former Lawrence star Joe Capobianco’s yardage record of 8,013. “Being the top seed, we know we’ve got a target on our backs and every team is going to bring their best against us,” he added.

Farmingdale answered McKee’s first-quarter score from a yard out with the game’s biggest offensive play from scrimmage, a 50-yard touchdown run by Tomasso Ramos to cut Oceanside’s lead to 7-6 1:47 into the second quarter.

After the teams traded punts, the Sailors drove inside the red zone but stalled on a 4th-and-6 attempt with just over a minute left in the half. Looking to take a lead into the locker room, the Dalers (1-1) were at midfield with 30 seconds to go when the momentum shifted for good. Oceanside senior Jack Hickam picked off a pass and returned it to the Farmingdale 20. Four plays later, McKee scored on a 3-yard run just before time expired and the hosts took a 14-6 halftime lead.

“That interception and touchdown really gave us some juice,” said Oceanside head coach Rob Blount, who in Week 1 became the program’s all-time coaching wins leader with 84, surpassing Roy Kessenich, when McKee’s four passing touchdowns led the way against Uniondale. “We came out and played a solid second half,” Blount added. “Defensively we gave up a few big plays, but Farmingdale’s a good team and fortunately those didn’t hurt us.”

McKee had touchdown runs covering 13 and 24 yards in the third quarter. Senior kicker Frank Morizio, who went 4-for-4 on extra points, booted a 40-yard field goal early in the fourth for some breathing room.

Richie Hosein added an interception for the Sailors, who visit Hempstead next Saturday at 2 p.m.