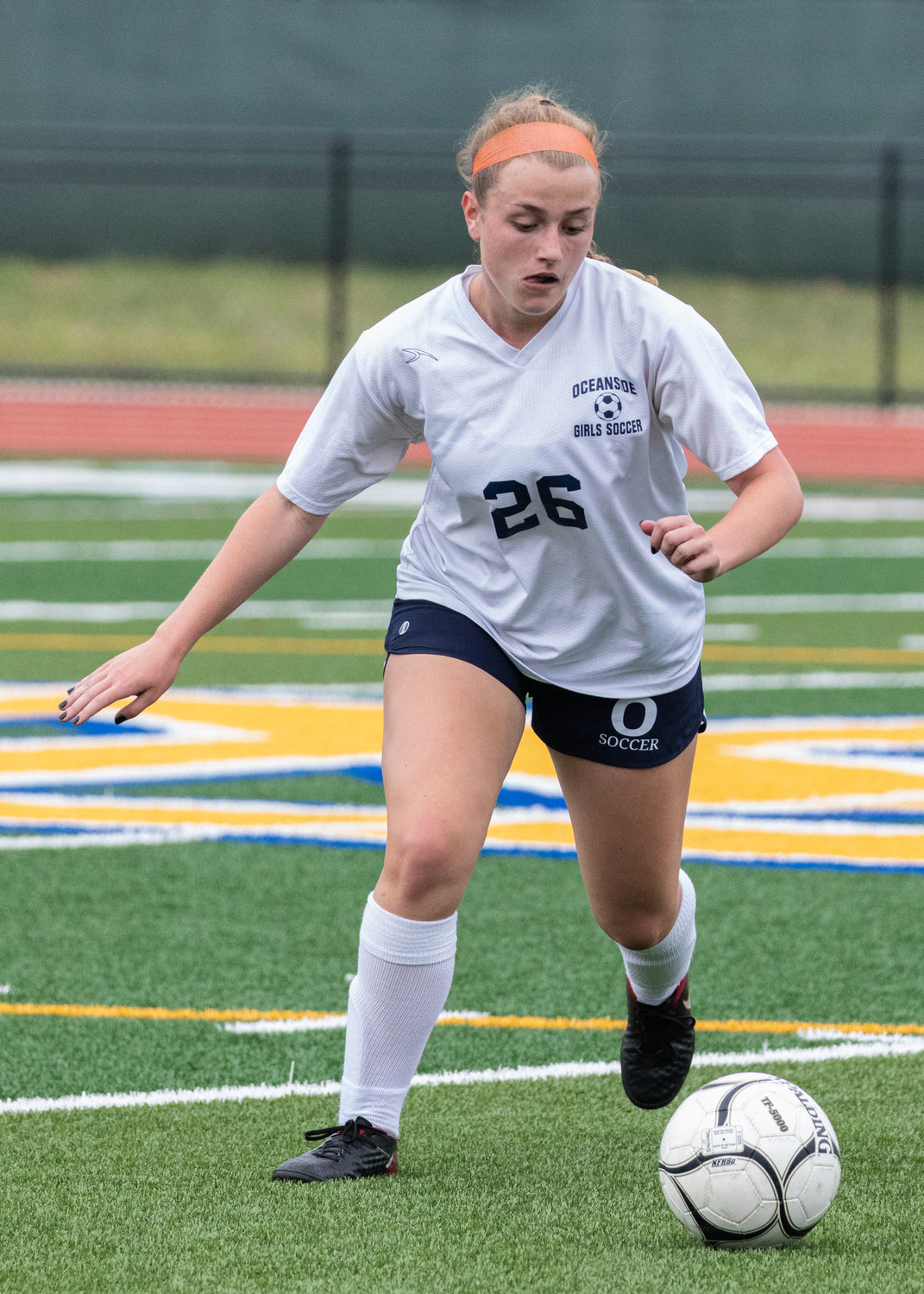 Senior Olivia Nestico is part of a solid defense for the Sailors, who enjoyed a strong regular season and earned the No. 2 seed in the Class AA playoffs.
Karen Millindorf/Herald
By Brian Kacharaba

The Oceanside girls’ soccer team is finishing the regular season strong after a brief skid late last month, but its coach is hoping some lingering issues that have plagued the team this fall will work itself out in the playoffs.
The Sailors entered the final week winners of four straight after a three-game winless skid to improve to 8-2-1 in Conference AA-I. Their 1-0 win Oct. 14 at Farmingdale, coupled with undefeated Massapequa’s 2-0 win over third-place Syosset, helped Oceanside clinch second place in the standings.
But while the wins are piling up, the scoring up front has not, which concerns Oceanside coach Marianna Winchester. It has scored just 21 goals this season, 14 fewer than Syosset and just two more than fourth-place Farmingdale (5-7), and eight of them have come from players listed as defensive backs on the roster.
“They’re frustrated because they know they should be scoring more goals and it’s just not happening for them,” Winchester said of her forward group. “I wish it would because they really do deserve it. Sometimes I say to them just relax and stick your foot out. You don’t have to kick a field goal. Give me a little more finesse than power.”
During the winless streak, Winchester tried to create an offensive spark by putting sophomore defender Ella McCowen up front, and the move might have saved Oceanside’s season. After a hard-fought 1-0 loss to Massapequa on Sept. 27 and a disappointing 2-0 setback to three-win Plainview two days later, the Sailors faced a 2-0 halftime deficit at home to Syosset on Oct. 1 before McCowen netted the game-tying goal with three minutes remaining to salvage a 2-2 tie.


“That helped us,” Winchester said. “It was the right call at the right time. I was just looking for anybody to score.”
McCowen scored twice more in a 4-0 win over Farmingdale on Oct. 4 and the Sailors have not lost since.
Junior defensive back Gianna Fucile has also been a catalyst behind the teams’ recent surge with a goal and seven assists in her last five games, including a helper on forward Nora Nestico’s game-winning goal last Thursday with about seven minutes remaining in the game.
Nestico has tried to ease Winchester’s fears by scoring in two of the last three games to up her team-leading total to four. On the game-winning goal against Farmingdale, she snuck behind the defense as she was being led by Fucile’s through pass and outraced the Daler goalkeeper to the ball before depositing it into the vacated net.
“Nora’s a feisty player,” Winchester said. “Sometimes when she goes up against more of these physical girls, she gets knocked around, but she’s playing 110 percent.”
The defensive corps of Fucile, Jessica Banta, Lily Johnson and Alyssa Strandberg and goalkeeper Natalie Medungo continue to be Winchester’s “rock” by allowing just nine goals this season, one more than Massapequa, with five shutouts. Winchester said Banta, who scored against East Meadow on Oct. 5, has been “phenomenal” as an injury fill-in.