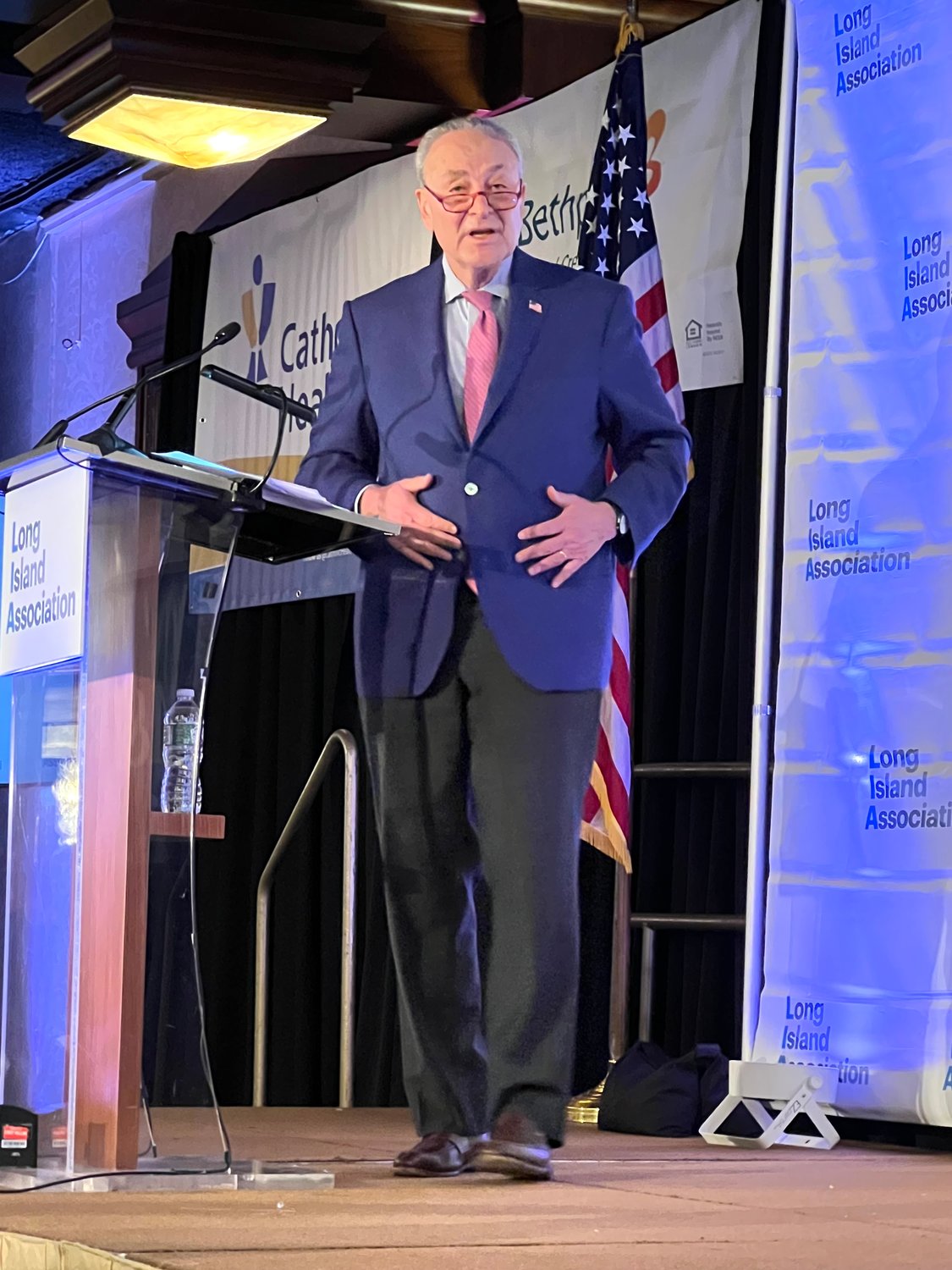 U.S. Sen. Chuck Schumer told those attending the Long Island Association breakfast at Crest Hollow Country Club last week he would seek to promote the environment, transportation and technology during a new session of Congress. Schumer remains majority leader after a midterm election that failed to put Republicans back in control.
Daniel Offner/Herald
By James Bernstein

The New York Democrat who maintained his role as majority leader in the U.S. Senate after last year’s mid-terms, told more than 1,000 people attending last week’s Long Island Association breakfast in Woodbury that he has, in the past two years, secured federal money to help the Metropolitan Transportation Authority recover from the worst of the Covid pandemic, while still getting money earmarked to protect the Long Island Sound and even clean up aging lead pipes.

The event at Crest Hollow Country Club was LIA’s annual State of the Region gathering that attracted both movers and shakers, as well as elected leaders like the executives from both Nassau and Suffolk counties. Schumer’s participation comes after he was elected to a fifth six-year term in the upper chamber of Capitol Hill, defeating Joseph Pinion, a conservative columnist who claimed Schumer had been in office too long with too little to show for it.

But history is written by the victors, and Schumer had a lot of history to share.

“We had one of the most productive legislative sessions in years,” the senator said, ticking off a list of legislative wins that included his role in shepherding through President Joe Biden’s $1 trillion infrastructure bill, as well as securing $15 billion for the MTA, which operates the Long Island Rail Road.

“No one was riding the trains” during the pandemic, Schumer added.

“For the first time, New York state got back more money that it gave out,” the senator said, referring to the give-and-take of funding with the federal government. New York has traditionally been a “giving” state, meaning its federal dollars usually went to help other states. This past year, the state was more of a receiver.

How productive the next two years will be is a big question. Republicans took control of the U.S. House — but only by a slim margin. That might mean pushing through bills that could win over at least some moderate Republicans.

One of those efforts will focus on improving transportation. The MTA funding, for example, would pay for repairs and upgrades of cars, tracks and electronic systems. Money also would be directed to portions of the Sunrise Highway in Nassau and Suffolk counties.

Another $5 million will build a transit hub in Ronkonkoma.

Schumer also budgeted $106 million to clean up Long Island Sound, and that’s just the beginning. He also plans to use $60 million to help remove some of the contaminants from the Long Island aquifer.

Yet, the Senator sounded most enthusiastic about a project to install electricity-generating windmills off Long Island’s South Shore — likely within the next few years.

Equinor, a multibillion-dollar Norwegian conglomerate specializing in petroleum, hopes to build a wind energy farm just a few miles off the coast with a substation delivering power directly to Island Park — a plan that has aroused controversy with neighbors.

The $3 billion project must still pass a plethora of bureaucratic hurdles, however.

“Long Island will be the capital for offshore wind,” Schumer said, “not just in New York, but across the country.”

“Long Island can be the center for (microchip) production and manufacturing,” Schumer said. “BNL and Stony Brook are at the cutting-edge of technology.”

Nassau County Executive Bruce Blakeman, told the Herald there was more in the works for this part of Long Island as well. He’s heard chatter about a strong interest in securing a casino, possibly at the Nassau Hub.

But for that to happen, anyone developing it would need to make sure the facility is first acceptable to the community.

“We wouldn’t be interested in anything but a first-class hospitality venue with a casino,” Blakeman said.