A light in the tunnel for George Santos: New York Young Republican Club offers their support 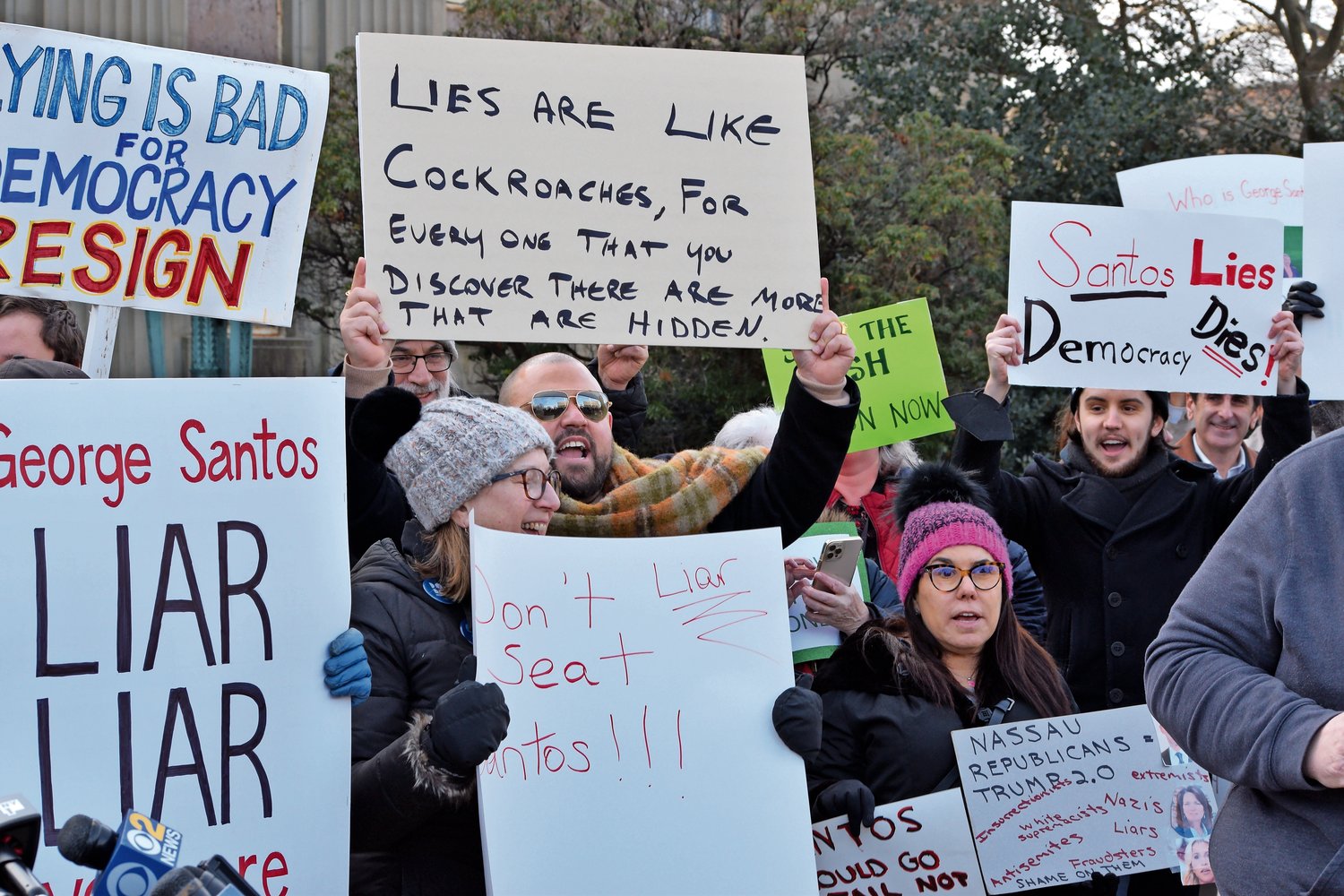 U.S. Rep. George Santos has many enemies, such as the protestors pictured here calling for his resignation. But a few groups — including the New York Young Republicans Club — still want to see him succeed in Congress.
Michael Malaszczyk/Herald file
By Michael Malaszczyk

U.S. Rep. George Santos, known for alleged fabrications and “embellishments” about his resume, has no shortage of detractors. Many people, including prominent Republicans like former Congressman Peter King, have called for his resignation. However, Santos still has his supporters. One, albeit somewhat reluctantly, is the New York Young Republican Club, led by Gavin Wax, its president.

A city-based organization for Republicans from ages 18 to 40, the club is known for its staunch support of Donald Trump. It made national news when it held a gala in December of 2020 where masks and social distancing was not encouraged, during the height of the coronavirus pandemic before vaccines were widely available.

Its gala in 2022 was not without controversy either with attendees that included Santos, as a guest of honor, white nationalists and right-wing conspiracy theorists like Marjorie Taylor Greene.

Wax said he’s known Santos for years. “I want to say I met George in passing around 2018 or 2019,” he said. “But I solidified more of a rapport with him around 2020, when he had already run for Congress, and he attended our 2020 gala. Our relationship was cordial and friendly.”

“He’s smart. He’s a fast talker, definitely charming in a way,” Wax continued. “But as I got to know him over the past few years, I’ve caught him in a series of things like little lies, little exaggerations. Almost as if he wanted to exaggerate just to elevate himself.”

According to Wax, a Baruch College graduate, Santos covered his tracks well in some of his fabrications, which included being a fellow graduate.

“He knew enough about Baruch to hold up a conversation with me,” Wax said. “He knew about professors and facilities. A lot of people I know from Baruch are first generation immigrants, so he fit the Baruch profile. So that was one of the bigger shocks when that came out.”

Wax added that a lot of Santos’s fabrications are based on “kernels of truth.” He defended Santos against certain claims, such as his ancestry and work history, saying that Santos’ maternal grandmother does have some distant Jewish ancestry and that he worked “with” Goldman Sachs as opposed to for them.

But no evidence has been found yet to support either claim.

The New York Young Republicans endorsed Santos in both of his congressional runs, against Democrats Tom Suozzi in 2020 and Robert Zimmerman in 2022.

Now, as Santos has come under fire for the source of his campaign donations, Gavin Wax raised an interesting point. “He clearly had money,” Wax said. “He flaunted it, showed it, donated it. He threw it around a lot. I think the biggest question now is where the money came from.”

But despite Wax’s personal reservations about Santos’ fabrications and the source of his money the club is not calling for the congressman to resign because with a thin House majority the GOP needs him.

“This is politics,” Wax explained. “Politics is about power. Democrats and the left understand this, and they circle the wagons against any of their controversial members, whether it’s for lying or other things. If he resigned, we would lose the seat. And we will lose the vote. Simple as that.”

The politicians the Democrats “circled the wagons on” are, according to Wax, Elizabeth Warren for her claims of indigenous heritage, Richard Blumenthal for lying about Vietnam, and Joe Biden’s assertions about his grades. Wax declined to comment on the Democrats’ ousting of Al Franken from Congress when he was accused of sexual harassment.

As for Santos’ future as a representative, Wax speculated that he won’t resign because he needs the money. While Wax said they do not plan to endorse Santos in 2024 should he run for re-election, the New York Young Republicans are firmly behind him while he’s in office, at least for now.