A look at Roosevelt’s resting place 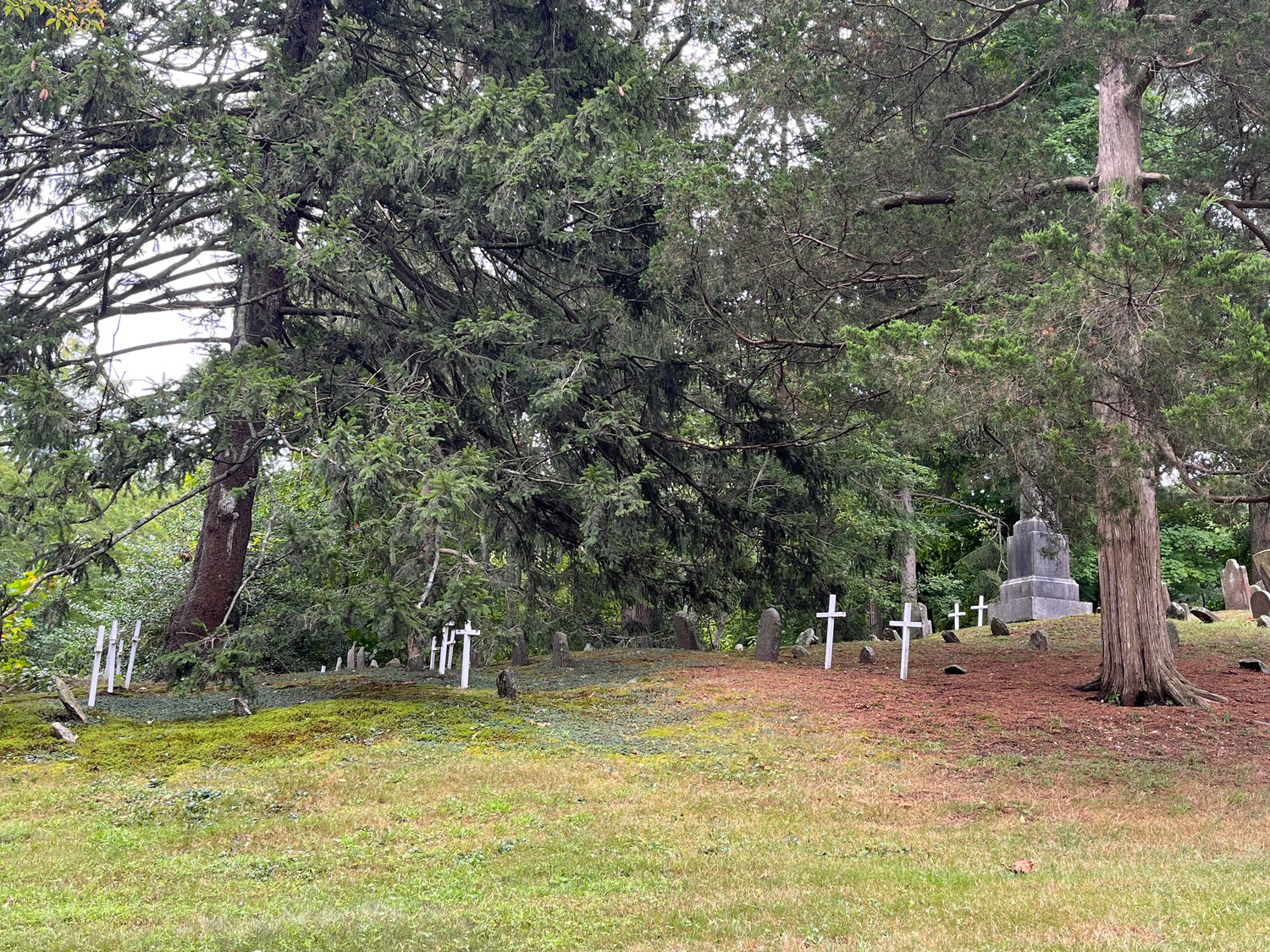 The white crosses scattered around the cemetery mark the likely locations of graves of indentured servants and slaves who served the Youngs family.
Will Sheeline/Herald

To me, it’s one of the most beautiful places in the world. It’s just gorgeous and peaceful beyond belief.”
Philip Roosevelt, chair, board of trustees, Youngs Memorial Cemetery
By Will Sheeline

Youngs Memorial Cemetery is one of many historic landmarks in Oyster Bay, and like many of the hamlet’s hidden gems, it has much more cultural significance than most people are aware of. It is, of course, famous as the resting place of the 26th president of the United States and Oyster Bay’s “First Citizen,” Theodore Roosevelt, but it was a historic site long before he ever asked to be laid to rest there.
The cemetery, like its name, is inextricably tied to the Youngs family, one of the first, and most prolific, families to settle on Long Island in the mid-17th century. The plot of land has been a burial ground since at least 1658, and still holds the remains of many of the hamlet’s first residents.
According to Paula Youngs Weir, the cemetery has been central to her family’s history for centuries. The property it now occupies was adjacent to the family’s original homestead, and has seen generations of Youngses come and go over the years.
“The home directly across the street from the cemetery, on the corner of Cove Road and Cove Neck Road, was built by (Thomas Youngs) around 1650,” Weir wrote in a family history for the cemetery’s website. “He was the first to settle a homestead in the area, which was certainly a wilderness, shared with Long Island’s Native Americans. The original portion of the Homestead is the oldest surviving structure in Oyster Bay, possibly the oldest in the county.”
Anyone who wanders through the cemetery cannot help but notice not only the older graves, but also many small white crosses. These, and several unmarked stone slabs, mark the resting places of indentured servants and slaves who likely lived and worked on the Youngs properties.


This burial practice was uncommon for the time, when enslaved people were traditionally buried on a separate plot of land. Because these graves are essentially unmarked, and burial records from the 17th and 18th centuries are incomplete, the identities of those buried beneath the crosses will likely never be known.
The cemetery’s board of trustees has devoted some time over the past year to researching the history of those indentured servants and slaves. In the future they hope to have a plaque or signs around the cemetery, highlighting the history and significance of slavery in Oyster Bay, and naming those in the unmarked graves if their identities are determined.
“We’re discussing how that might be communicated to the public,” Ed Mohlenhoff, the board’s president, said.
The cemetery’s historical piece de resistance is, of course, Roosevelt’s grave. Roughly two decades before his death on Jan. 8, 1919, Roosevelt had asked Judge William Youngs, the last member of the family to own the homestead, if he and his family could be buried there.
Roosevelt was a famously hard man to refuse, and so he, his wife, Edith Carrow, his daughter Ethel and his son Archie are buried there, along with dozens of Roosevelt cousins, Youngs family members, and other distinguished Oyster Bay citizens.
In honor of the 26th president, there are 26 steps that lead visitors off the main path to Teddy Rossevelt’s resting place.
Philip Roosevelt, the cemetery board’s chairman, grew up at the old homestead, and recalled climbing the 26 steps as a child, while he and other students tried to name each president from Washington to Roosevelt as they took each step. In this way, for the younger Roosevelt, the cemetery connects the hamlet to history, while also being simply a beautiful place to walk and think.
“To me, it’s one of the most beautiful places in the world — it’s just gorgeous and peaceful beyond belief,” Roosevelt said. “People think cemeteries are depressing or spooky. I don’t always think that’s the case, and it’s definitely not the case with this one.”
Report an inappropriate comment