Can clams and oysters make a comeback in Oyster Bay? 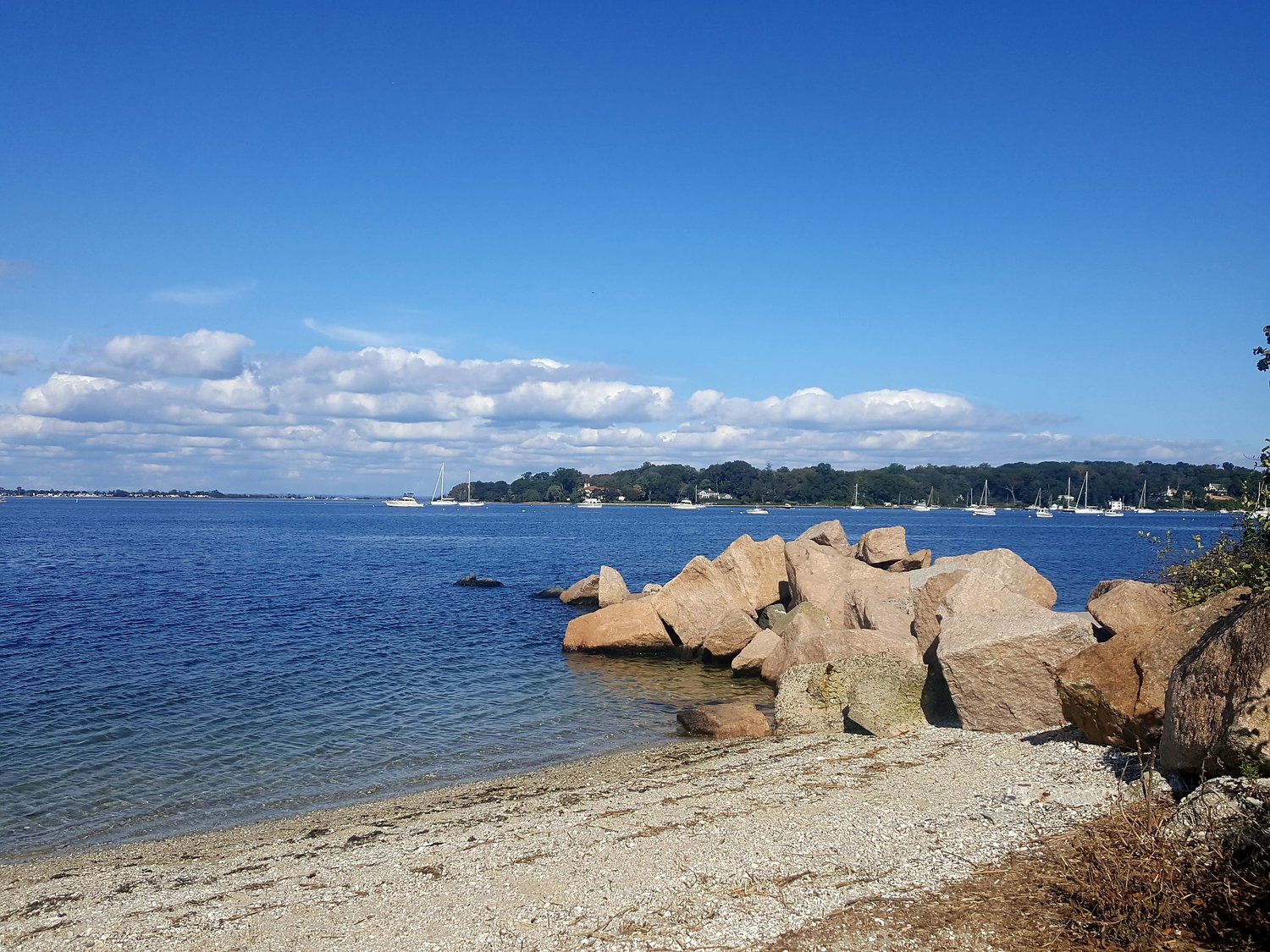 The view of Oyster Bay Harbor from Theodore Roosevelt Park is stunning for visitors, but for shellfishers it is a source of frustration. Although they were once plentiful, there are now very few oysters or clams in the harbor.
Courtesy Heather Johnson

If you take too much, sooner or later it won’t be there anymore.”
Billy Painter, President, NOBBA
An Alert about Oyster Bay’s Shellfish Population — By the Friends of the Bay Board of Directors

Many people in the Oyster Bay/Cold Spring Harbor area don’t know that our shellfish population, particularly our namesake oysters, has suffered a serious decline. And fewer oysters and clams, which filter the water, means dirtier water and a threat to the livelihood of commercial harvesters and the enjoyment of recreational users.

For the shellfish population to become sustainable for the long run, Friends of the Bay believe several steps should be taken. The Town of Oyster Bay has been very receptive to our suggestions, outlined below, and had already planned to implement many of them.

The amount of acreage that the town will make available for commercial shellfish harvesting from the bay bottom should be reduced under a new licensing plan to be implemented when the current lease expires in 2024.

The town should increase the number and size of shellfish sanctuaries where no commercial or recreational harvesting is allowed. Protected acreage must be of sufficient size and quality to provide the ecological benefits of a healthy marine ecosystem – water filtration, reproduction to seed the rest of the bay, erosion control, and food and habitat for other species.

The number of juvenile shellfish seeded into the bays by the town and shellfish growing license-holders needs to be increased. The quantity of seed should be based on the size of the area licensed.

“Off-bottom aquaculture” (shellfish cultivation in bags or cages) must be allowed and encouraged to preserve Oyster Bay’s shellfish legacy without damaging the bay bottom.

Any company or individual that receives a town license to cultivate shellfish should be required to provide seed to the town for planting in a designated sanctuary or conservation management area in Oyster Bay or Cold Spring Harbor in any year that they harvest.

Wetlands restoration and the creation of oyster reefs are needed to protect existing wetlands and reduce shore erosion. A town shell-recycling program to retrieve shells from restaurants should be the first step toward the creation of these oyster reefs. Recycled shells can help return unproductive bottom land to viable oyster habitat by providing a home for seed oysters.

Creation of a comprehensive plan for managing the bay must be a top priority. Friends of the Bay has encouraged the town to create a bay management plan with an advisory committee of representatives from user groups, environmental organizations, and experts in bay management and water-based industries.

While COVID-19 has had an impact on the number of shellfish harvested because demand dwindled, the quantity harvested as reflected in state landing reports has declined over many years, despite some fluctuation. The state Department of Environmental Conservation tracks shellfish harvests and their reports suggest that these resources are in danger. But oyster and possibly clam harvests have plummeted in recent years – even allowing for the decline in restaurant purchases during the COVID-impacted 2020 season. The state reports show that oyster harvests peaked in 2013 and have trended downwards since, while clam harvests have fallen steadily since 2016 except for a slight rise in 2019.

A major revelation and warning sign was the fact that two years ago, for the first time, oysters served at the Oyster Festival had to be imported from Connecticut rather than harvested from Oyster Bay.

The cause of the decline is likely a combination of harvesting beyond sustainable levels; reduced seeding of juvenile shellfish; warming water from climate change, which makes the water more acidic and dissolves the calcium in shells; stormwater runoff that carries oil, sediments and other pollutants into the harbors; predators and disease.

Whatever the cause, the trend is alarming. And as the town drafts new rules and issues new licenses for continued shellfish cultivation, it is critical that the public be aware of this trend and the steps that must be taken to reverse it.

A viable shellfishing industry with increased oyster and clam populations in Oyster Bay and Cold Spring Harbor will help improve the water quality and combat the harmful algal blooms that have plagued the region’s waterways, now including Cold Spring Harbor.

To read the entire Friends of the Bay statement, including more details on the current situation and the town’s plans, go to friendsofthebay.org.

People engaged in shellfishing in Oyster Bay Harbor, commercially or otherwise, respect the opinions of Friends of the Bay, which advocates for the bay’s protection. But the nonprofit environmental organization has traditionally chosen not to take sides between commercial shellfishing company Frank M. Flower & Sons, which uses mechanical dredging, and independent shellfishers from the North Oyster Bay Baymen’s Association, who believe that dredging damages the bay. The science is mixed on the practice, FOB members say, so they’d like to stay out of it. Instead, the organization is focusing on the big picture — and perhaps not a moment too soon.

After several meetings with Town of Oyster Bay officials, FOB has written an open letter to the community, and shared it with the Herald (see letter in left collumn), outlining strategies to keep the bay, which is suffering from a declining shellfish population, viable.

“When we tell people there are almost no oysters left in Oyster Bay, and that the oysters at the Oyster Festival two years ago had to be imported from Connecticut by the Rotary Club, people looked stunned,” Bill Bleyer, FOB’s president, said. “So we said we have to stop talking to ourselves and tell the public what’s going on.”

Billy Painter, president of NOBBA, said he believes the situation in Oyster Bay Harbor is dire. He said he knows of only two baymen who currently work there. The rest fish in the Long Island Sound in Glen Cove.

In the letter, FOB recommends that the town create a bay management plan with an advisory committee that would include “representatives from user groups, environmental organizations and experts in bay management and water-based industries.”

In an email to the Herald, town representatives wrote that its Department of Environmental Resources has created a Water Resources Guidance Document, which is similar to a bay management plan. Discussed with environmentalists, including members of FOB, prior to being drawn up, it is currently in draft form. The document includes a framework for implementing programs to improve conditions in the Oyster Bay Harbor-Cold Spring Harbor complex.

Once the town is ready to implement the strategies outlined in the document, the email stated, an advisory committee will be created.

Flower’s lease for 1,500 acres in Oyster Bay Harbor expires in 2024, and the town has not yet agreed to renew it. For now, the town has said it would allow 150 acres outside Flower’s leased area to be harvested by commercial companies. There are no plans for Flower’s acreage.

FOB would like to see a large portion of the harbor become a sanctuary, with shellfishing prohibited. But the organization would leave the decision on exactly how large that area would be to the town’s consultants.

The town is asking that new leaseholders use “off-bottom” aquaculture — growing shellfish in a bag or cages suspended off the bay bottom — which FOB supports. One company is currently under consideration.

Even so, recreational and commercial shellfish license holders would be able to use rakes in certified areas, said Barry Lamb, a past president of FOB and the chair of its conservation committee.

“It’s important to point out that the entire bay is open to some kind of harvest at this point other than areas that are closed due to water quality,” Lamb said. “At no point in its history has any portion of the bay been managed for habitat and ecological services and put aside for that reason.”

Flower, who planted clams and oyster seeds annually for years, stopped doing so in 2019, five years before its lease was set to expire, and also shut down its hatchery. The reason given, Bleyer said, was the company was uncertain that its lease would be renewed, and maintained that there were issues with predators.

There is a three-year cycle from seeding clams to harvest, and two to three years for oysters. “Nothing is five years,” Bleyer said. “. . . [Flower] stopped [seeding], claiming it was half predator issues and half uncertainty over the lease, but they also said there were areas where there weren’t much of a predator problem. So for them to shut down the hatchery five years before the lease expired and not do any seeding at all sent up a red flag for us.”

Heather Johnson, FOB’s executive director, said they don't know  whether or not there is a predator problem. "There might be some," she said, "but if there is enough to cause damage we don't know that."

James Cammarata, Flower’s attorney, could not be reached by press time.

Included in FOB’s letter is a suggestion that any company  receiving a town license to cultivate shellfish be required to provide clam and or oyster seeds annually to be planted in a designated sanctuary or conservation management area. There are two conservation areas, one in Oyster Bay and the other in Cold Spring Harbor. The one in Cold Spring Harbor has a spawner sanctuary. Johnson said that FOB would like to see more spawner sanctuaries.

FOB supports a planned town shellfish recycling program set to begin in 2022, also mentioned in the letter. The town is working on coordinating the details, which include finding space to cure the shells and managing a collection process.

“Wetlands restoration and the creation of oyster reefs are needed to protect existing wetlands and reduce shore erosion,” FOB’s letter stated. “A town shell-recycling program to retrieve shells from restaurants should be the first step toward the creation of these oyster reefs.”

Bob Wemyss, NOBBA’s secretary, was surprised by the letter. “We’ve been lobbying Friends of the Bay to ask the Army Corps of Engineers to require a water quality certification since 2013,” he said. “If they stood up on that issue a long time ago, [a depleted harbor] could have been resolved years ago.”

Wemyss said he would like to see a permanent sanctuary and rotational management, similar to the way farmers rotate crops. “The issue of what to do with Flower’s lease, should it not be renewed, should be the subject of a comprehensive shellfish management plan,” Wemyss said, “and no new use of aquaculture on that land should be approved until the management plan is adopted.”

Painter would also like to see more of the bay become a sanctuary. And he, too, supports a bay management plan, which he said NOBBA has asked for for a long time.

“It would decide where to put the sanctuaries, and include a rotational plan — work one area for a year, and then close it for three to four years,” Painter said. “We’ve never had that in our harbor. If you take too much, sooner or later it won’t be there anymore. I know the town looks at us as a commercial entity, but we are also stewards of the harbor.”