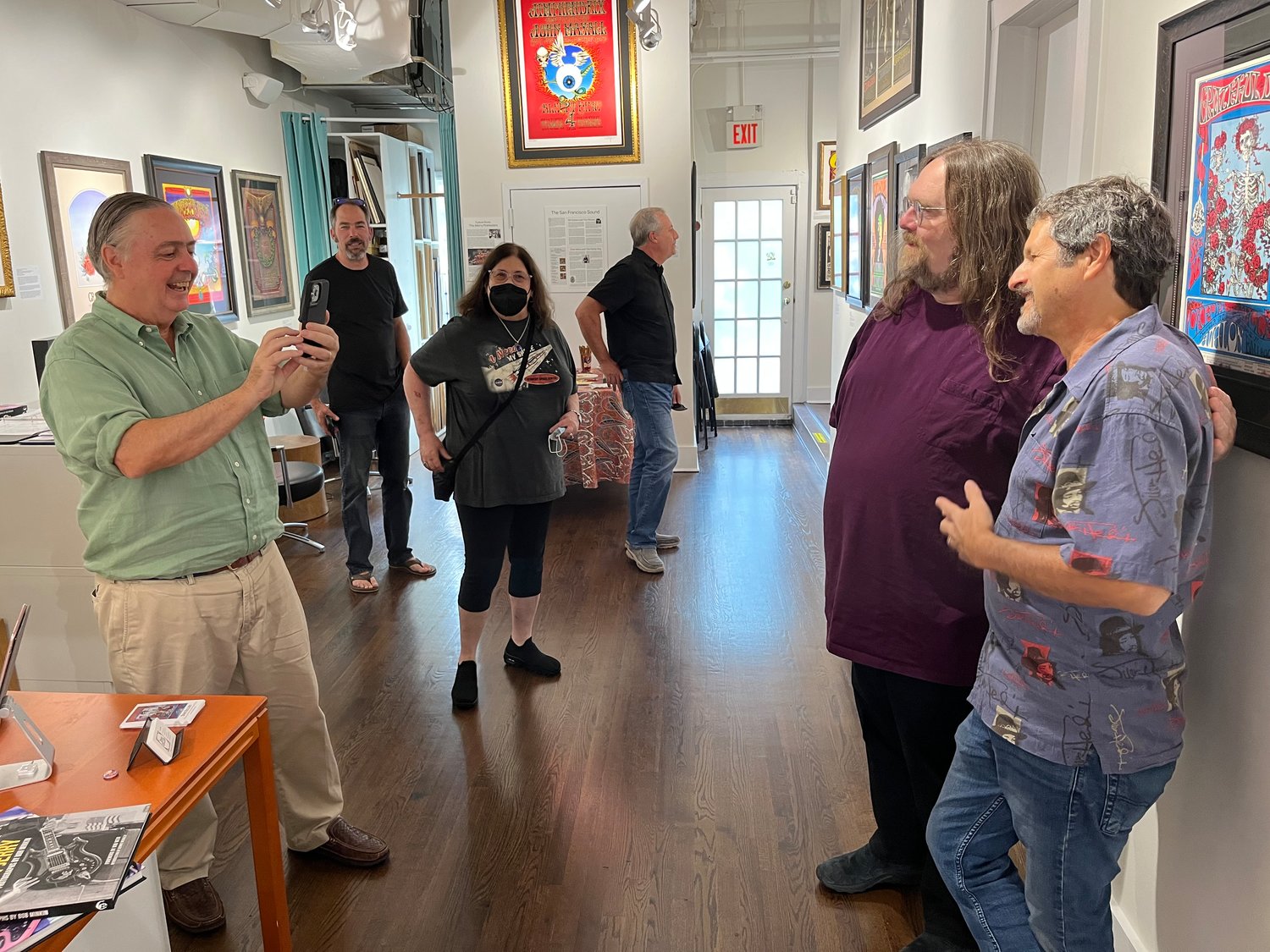 I realized that I’m like a memory keeper for a lot of people.”
Bob Minkin, Grateful Dead photographer
By Will Sheeline

Deadheads from near and far came to meet Bob Minkin, a well-known photographer of the Grateful Dead and other major bands, who was in Oyster Bay on July 14 to sell and sign copies of his new book, “Just Bobby.” The event was held in the Bahr Gallery, which sells psychedelic poster art and is owned and operated by Oyster Bay Cove resident Ted Bahr.
Minkin, 63, had a long association with the Dead, falling in love with their music when he was young. As a 15-year-old, he said, he’d find ways to get into concerts to see his favorite bands, which included the Allman Brothers, Jimi Hendrix, and especially the Dead.
“I grew up in Brooklyn, and really fell into the music scene in 1972, when I was 13,” Minkin recalled. “I immersed myself in that world, the world of getting high, music and hanging out with friends.”
His ticket inside the world of psychedelic rock came in an unexpected form — photography. He initially took photos at concerts as a hobby, but by 1977 he had been hired to take photos of the Dead by Relix magazine, known at the time as Dead Relix, one of the only publications focusing on the Dead’s hallucinogenic sound and vibes.
Through his work, he grew close to friends of the band members, who introduced Minkin to them. Over the course of a decade and a half, he would take many intimate photos of them, on stage and off. Then, in 2013, Minkin published a collection of his photos in “Live Dead: The Grateful Dead Photographed.”


“I realized that I’m like a memory keeper for a lot of people, because I’m 63, and a lot of these fans are my age and older,” Minkin explained. “In a lot of cases, people don’t really remember a lot of the details. They’re vaguely aware of memories of the shows, but when they get the book and they look at the pictures, that brings them right back.”
The book was a success, and Minkin has subsequently published three more, including his most recent two, “Just Jerry,” in 2019, and “Just Bobby,” in April of this year, his collections of photos of Jerry Garcia and Bob Weir. He brought these books with him to Bahr Gallery.
The gallery has been open since 2018, and features collections of poster art from some of the most famous bands of the period, including, in addition to the Dead, the Beatles, the Rolling Stones and many more. The current exhibition is entitled “The British Invasion,” and it focuses on the many British bands that became huge hits in America in the late 1960s and early ’70s.
Ted Bahr has been a huge fan of the Dead for many years, and when he heard about Minkin’s latest book, he reached out to him about a gallery book signing. They settled on July 14, since Minkin would already be in town for Dead & Company concerts at CitiField.
About 60 Deadheads from all over Long Island gathered at the gallery last Thursday. Jeff Mattson, lead guitarist for the Dead cover band Dark Star Orchestra was in attendance, as was Beau Carino, the owner of the only Dead-themed bar on Long Island, Beau’s Bar in Greenlawn.
“With Covid hopefully ending soon, people are realizing again how important it is to be able to gather physically again,” Bahr said. “This was one of those events, and this is one of those places where that happens, and so I think that’s what makes it extra special.”
Attendees were excited to get the chance to swap stories with Minkin, and expressed their delight with the venue, highlighting its importance as a preserver of the musical culture of the ’60s and ’70s.
“These really aren’t posters, they’re works of art, and each one has a hidden meaning of some sort,” Jonathan Silberstein said. “This is a time capsule of a short period, from ’66 to ’74, and Ted’s got a really nice collection here.”
Report an inappropriate comment