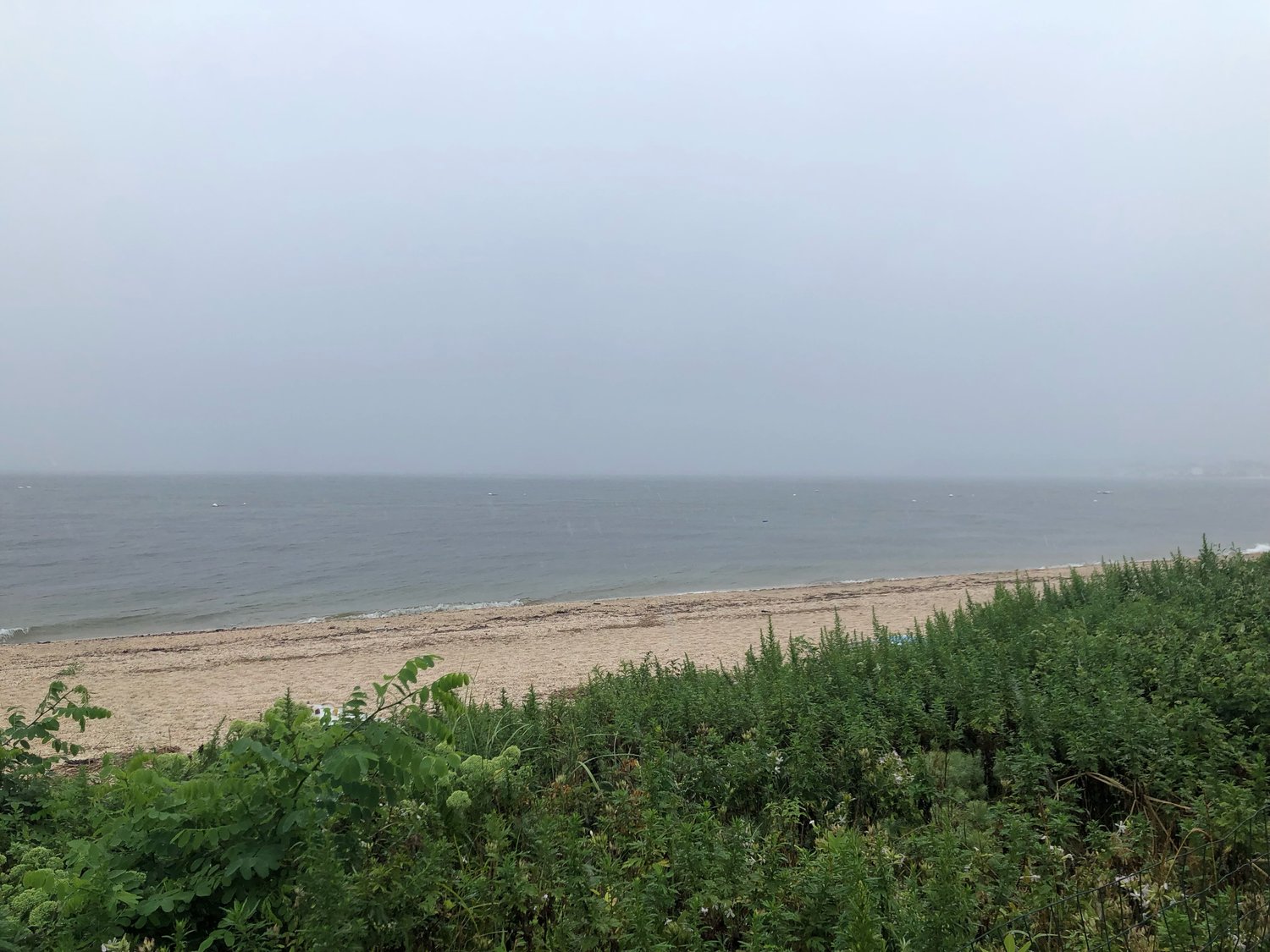 As of noon, the sound was calm in Bayville during Henri.
Courtesy John Taylor 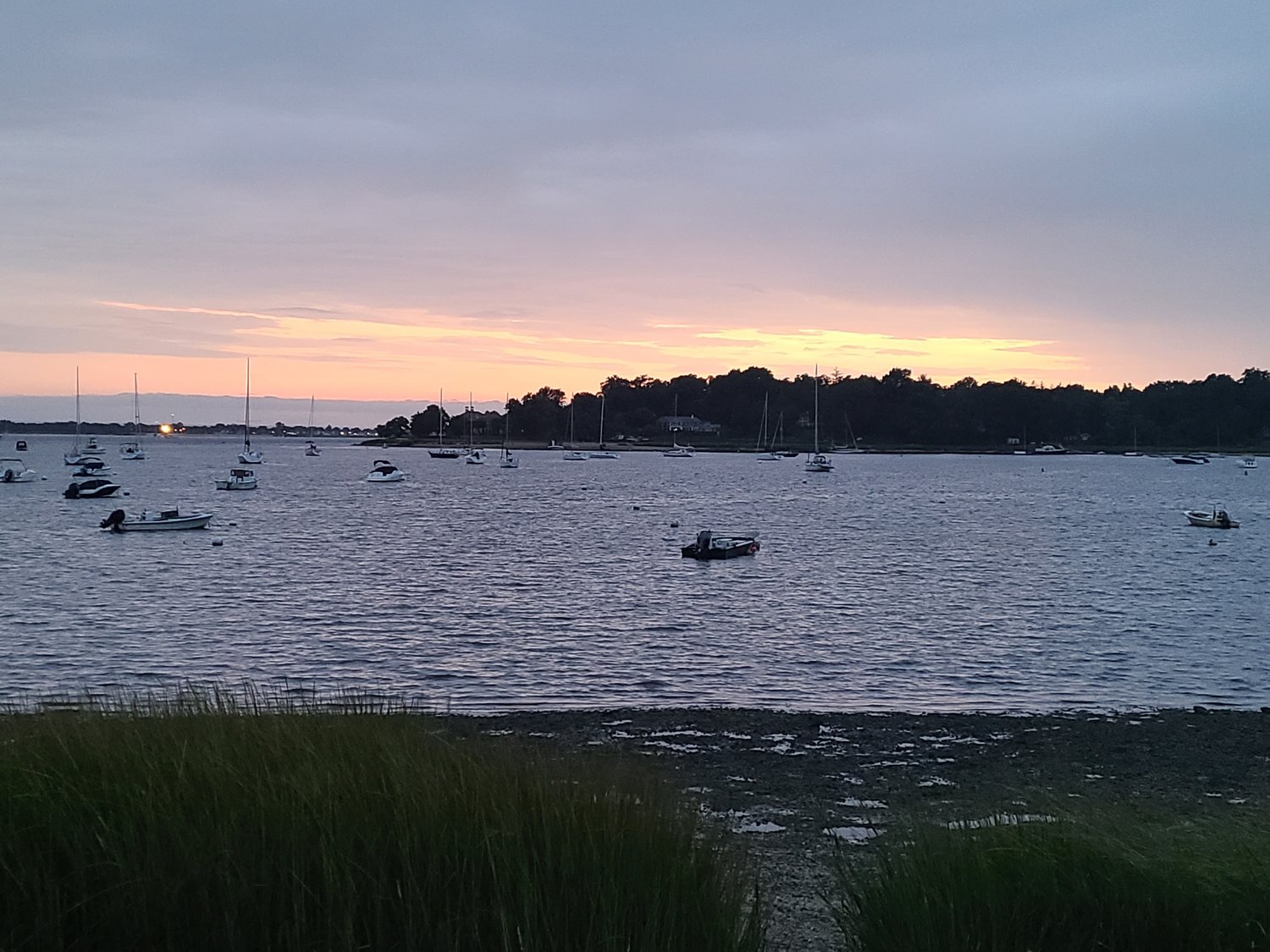 At daybreak the sound in Bayville looked pretty normal, despite Henry.
Courtesy Bill Fetzer
Previous Next
By Laura Lane

Updated: 1 p.m., Aug. 22: Henri reached Long Island early Sunday morning as a tropical storm, bringing with it heavy rain and 25 to 35 mph winds across eastern Long Island, conditions that were expected to worsen and spread westward as the day wears on, according to the National Weather Service.

As of 1 p.m., it was raining hard in Bayville, Oyster Bay and the surrounding villages. Winds were coming out of the northwest, fluctuating between 5 and 10 miles per hour, in Bayville, which is normal for this time of year in the village. In Oyster Bay the winds were also northwest at 15 mph.

Bayville Mayor Bob De Natale said the village was doing well. “There has been no flooding except for rain,” he said. “We pump the streets on the east end of the village when this happens.”

Everyone is staying indoors. And he is pleased by the work being done by the village’s Department of Public Works.

“At 6:30 this morning it was just cloudy,” said John Taylor of Bayville, who has a view of the sound from the back of his house. “By noon it just looked gray.”

The NWS downgraded Henri to a tropical storm from a Category 1 hurricane when its wind speed dropped from an average of 75 to 70 mph.

The weather forecast for Bayville and Oyster Bay is rain throughout the day. Winds will pick up but not nearly as high as what was predicted when Henri was believed to be a hurricane.

“While we’re fortunate that Tropical Storm Henri shifted away from Long Island, it serves as a reminder of just how vulnerable our region is to Mother Nature,” Supervisor Joseph Saladino said. “Mostly a rain event, town crews stand ready to remove downed trees and alleviate street flooding.”

At 7 a.m. Henri was circulating in the Atlantic Ocean 50 miles southeast of Southampton. That put the storm significantly farther east than predicted on Saturday, when forecasters estimated the storm's track would run straight through the center of the island, in the Islip area. Henri's track, coupled with its reduction to a tropical storm, should reduce its impacts for Nassau County, according to forecasters.

The NWS is still warning, however, that this remains a major storm that will bring potential downpours in Henri's outer bands throughout the day through 4 p.m., strengthening winds, a two- to four-foot storm surge for the South Shore and potentially higher for the North Shore, and rough surf. Power outages remain a concern, as well.

Beaches are closed, and all are advised to stay out the water and off the roads.

The Long Island Rail Road is running on time.

Given the potential intensity of the storm, some power outages may last up to seven to 10 days, PSEG Long Island officials said Saturday. "We continue to monitor the track of Tropical Storm Henri," said Michael Sullivan, senior director of transmission and Distribution at PSEG Long Island. "As the storm makes its way up the coast, employees are preparing for the possibility of high winds that can cause flying debris and bring down trees and power lines. We encourage our customers to do the same at their homes and businesses."

In response, Nassau County Executive Laura Curran, a Democrat from Baldwin, said, “Potential seven- to 10-day power outages are unacceptable. While we are all hoping for the best outcome this weekend, PSEG must call in additional crews who are prepared to respond to our residents' outages.”