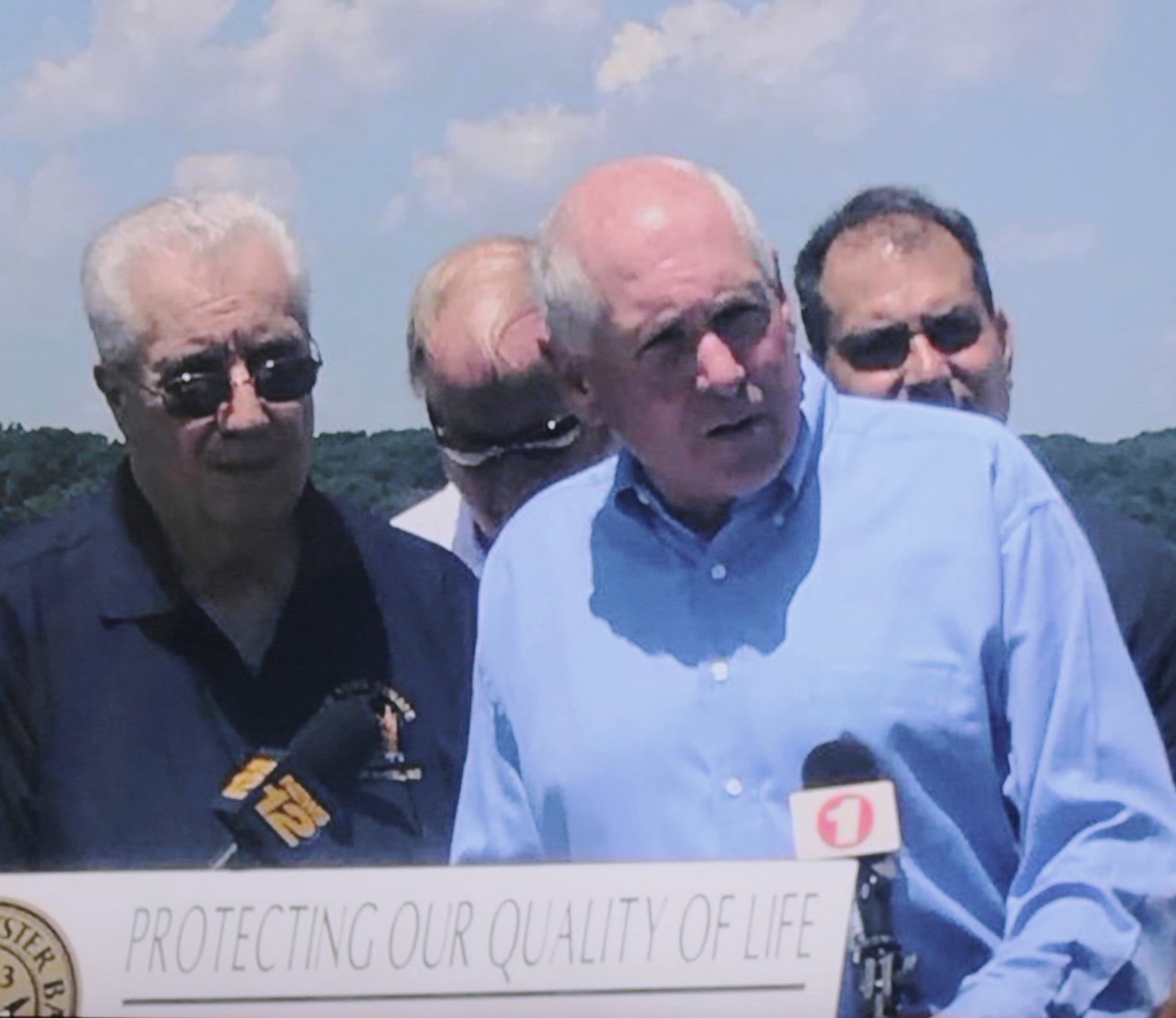 John Taylor, center, held a press conference at Theodore Roosevelt Memorial Park and Beach in 2018. He was there in his capacity as the chair and co-founder of Coalition Against an UnSound Crossing to fight Gov. Cuomo’s plan for a tunnel on the North Shore. Larry Schmidlapp, mayor of Centre Island and Town of Oyster Bay Supervisor Joseph Saladino were there to show their support.
Courtesy John Taylor

We need to bring new life to Bayville, which is why we created the party Better Bayville”
John Taylor, Bayville mayoral candidate
Who is John Taylor

Lived in Bayville since 1961

Co-founder and chairman of the Coalition Against an UnSound Crossing

Member board of directors for Friends of the Bay, 2018 to present

John Taylor has a lifetime of accomplishments. Now, he’d like to add to it by becoming the next Village of Bayville mayor.

There are several reasons he’s running, he said, but one issue that needs fixing now is the blighted property where Steve’s Pier once stood. Thirteen years ago, the popular eatery at 33 Bayville Ave. was razed. What to do with the property has been a thorn in the village’s side ever since. Restaurants come and go and no one usually cares what is built next, but the Steve’s Pier property has created division throughout the village. Over the years possibilities for the property have included an event center, spa, resort or apartment complex. But nothing has panned out, and there hasn’t been any discussion for years.

“I’m tired of seeing the pile of dirt,” Taylor, 70, said. “I want to create a task force to sit down with residents to float ideas and work with state and federal governments to fund something that will be an asset to Bayville. I don’t think we should foot the bill.”

If something great is built, he said, it will become an asset, which will increase property values and bring other businesses to Bayville.

“Greenport, 30 to 40 years ago was like Bayville is now,” his wife, Patty Anglin said. “They brought in the carousel and cleaned up the waterfront. Now it’s a thriving town.”

But Steve’s Pier isn’t the only area needing a facelift, Taylor said. Work needs to be done to beautify the village with the addition of gardens, the sprucing up of building facades and elimination of blight. Bayville needs to be “charming,” he said, in order to attract more people to visit. And grants could be obtained to make all of this happen.

“We need to bring new life to Bayville, which is why we created the party Better Bayville,” he explained. “I’m really, really motivated. I love Bayville and I want to improve it.”

Taylor has been an advocate for his neighbors since 2002, when he served as a trustee for the Pine Island Park Association, Bayville’s largest homeowners and beach association. Then he went on to become it’s president from 2008 to 2017.

Taylor, who has lived in Bayville since 1961, has experience in local government. He served as a village trustee from 2014 to 2018.

A conservative Republican, Taylor said he is able to work with anyone, which will help him in Bayville, where trustees don’t always get along and issues can become contentious.

“John has good communication skills, is open and transparent and has a lot of connections among Republicans and Democrats that he can utilize,” said former Bayville mayor Paul Rupp, who Taylor served under. “He’s a smart guy. Give John a project and he takes the ball and runs with it. And he’s good at bringing individuals together to get the project done.”

Former trustee Tim Charon, who worked with Taylor on the board agrees. “He’s a stand-up guy and been around long enough to know the right thing to do,” Charon said. “John’s very wise. He’d make a great mayor.”

Taylor successfully led the fight to stop Gov. Andrew Cuomo from building an 18-mile tunnel from the North Shore to Westchester County in 2018. As the co-founder and chair of Coalition Against an Unsound Crossing, he conducted presentations for residents and was effective in gathering support to fight the governor’s plan from bipartisa federal and state elected leaders. Many residents attribute Taylor’s leadership and ability to obtain the help of these leaders as the reason why the project was squashed.

Centre Island Mayor Larry Schmidlapp was involved in the anti-tunnel movement too. He said Taylor is a leader who is very organized and able to get things done.

“I know I could work with him if he became mayor,” Schmidlapp said. “He’s got the motivation and the time and isn’t shy. He’s not a guy that would bankrupt the village.”

Taylor founded his own advertising agency in 1986, which grew to operate in 11 countries, he and worked on behalf of major international brands, such as American Express, Citibank, Marriott Hotels & Resorts, Universal Studios, Pepsi and Pizza Hut.

“John has a 170 IQ, is very creative and very good with people,” Lorelli said. “He’s a team player and he’s the captain. John’s very effective, efficient, has the stature and panache. Plus, he’s a genuinely nice person.”

During Rupp’s administration Moody’s gave the village an A1 rating, money owed to the IRS was paid and a reserve fund of roughly a million dollars was formed. These funds have been decimated, Taylor said, and that has to change.

There are reasons, including money needed for Covid-related expenses, which led to less revenue from tickets, the issuing of fewer permits for building and a halt in film production permits. And raises were given.

“There are ongoing expenses that are set in stone, including salaries, insurance, and maintenance,” Taylor said. “And no one wants to raise taxes so [the administration] got into a corner. But they were not proactive to help the village grow.”

Federal and state grants should have been obtained, he said, and village government needs to seek out filming opportunities. “The town got in front of these studios and was able to get them to film in Bayville,” Taylor reasoned.

Financial planning to build up the reserve is needed. “We need to stop spending money on frivolous lawsuits, clean up the blight, and encourage more businesses to open in Bayville,” he said. “I have a lot of energy and ideas. I stopped the tunnel and sea wall and worked with [Legislator] Delia [DeRiggi- Whitton] on Sandy litigation when I was on New York Rising.”

Larry Weiss, of Plainview, worked with Taylor on the Coalition Against an Unsound Crossing committee to defeat Cuomo’s tunnel initiative. A liberal Democrat, Weiss said Taylor has superior communication skills.

“We are able to have civil exchanges and hear each other, and that’s unusual these days,” Weiss said. “That impresses me most about John. And he’s passionate about Bayville and his neighbors. Put that with someone who is able to dialogue and get things done and it will be a win win for Bayville.”