Kids from St. John's of Lattingtown help Uvalde from 1,941 miles away 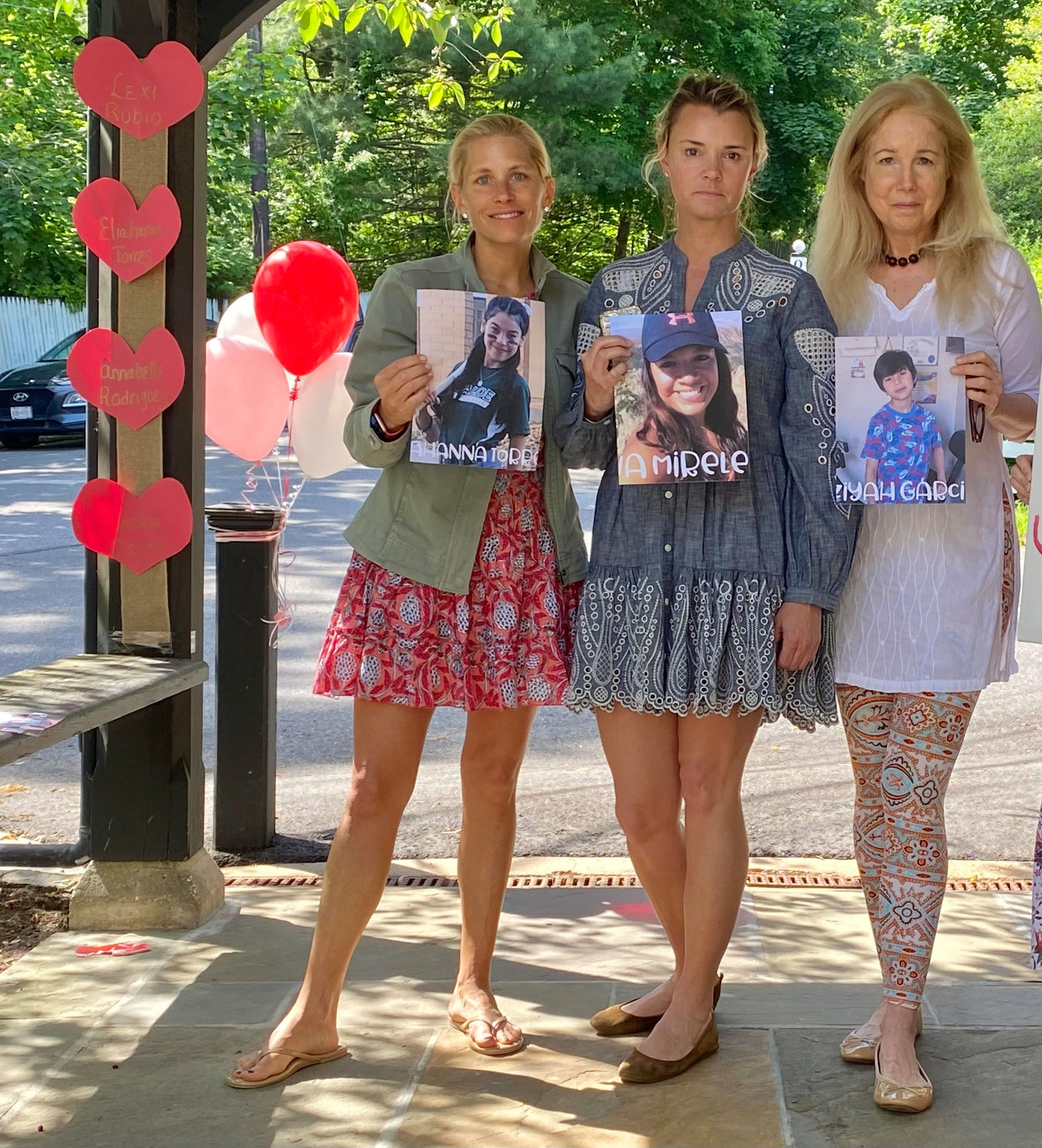 Julie Zarou, left, Allison Aston and Courtney Callahan organized the bake sale of which the proceeds will be given to an Episcopal church a mile and a half away from Robb Elementary School to help the community.
Courtesy Courtney Callahan 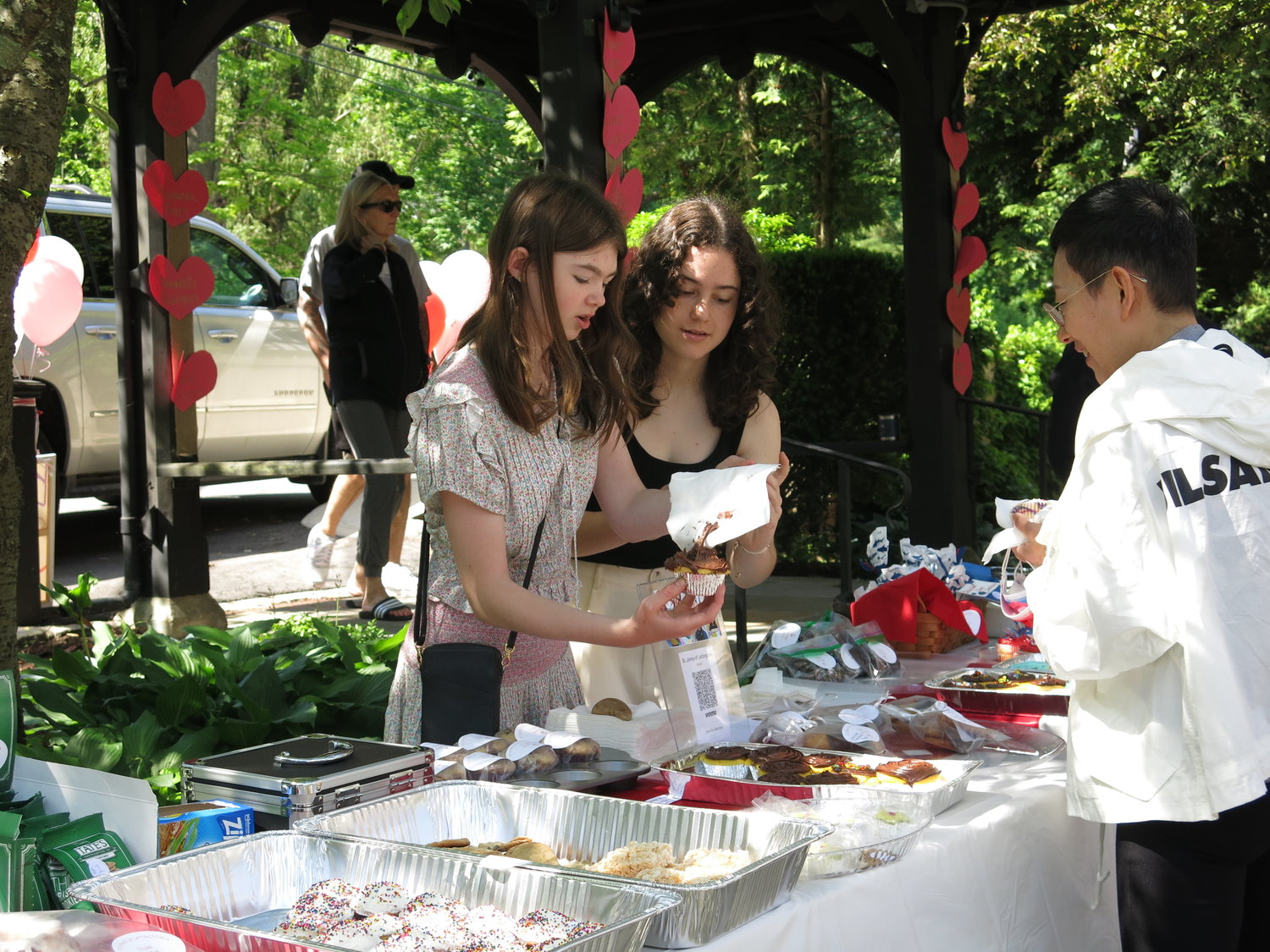 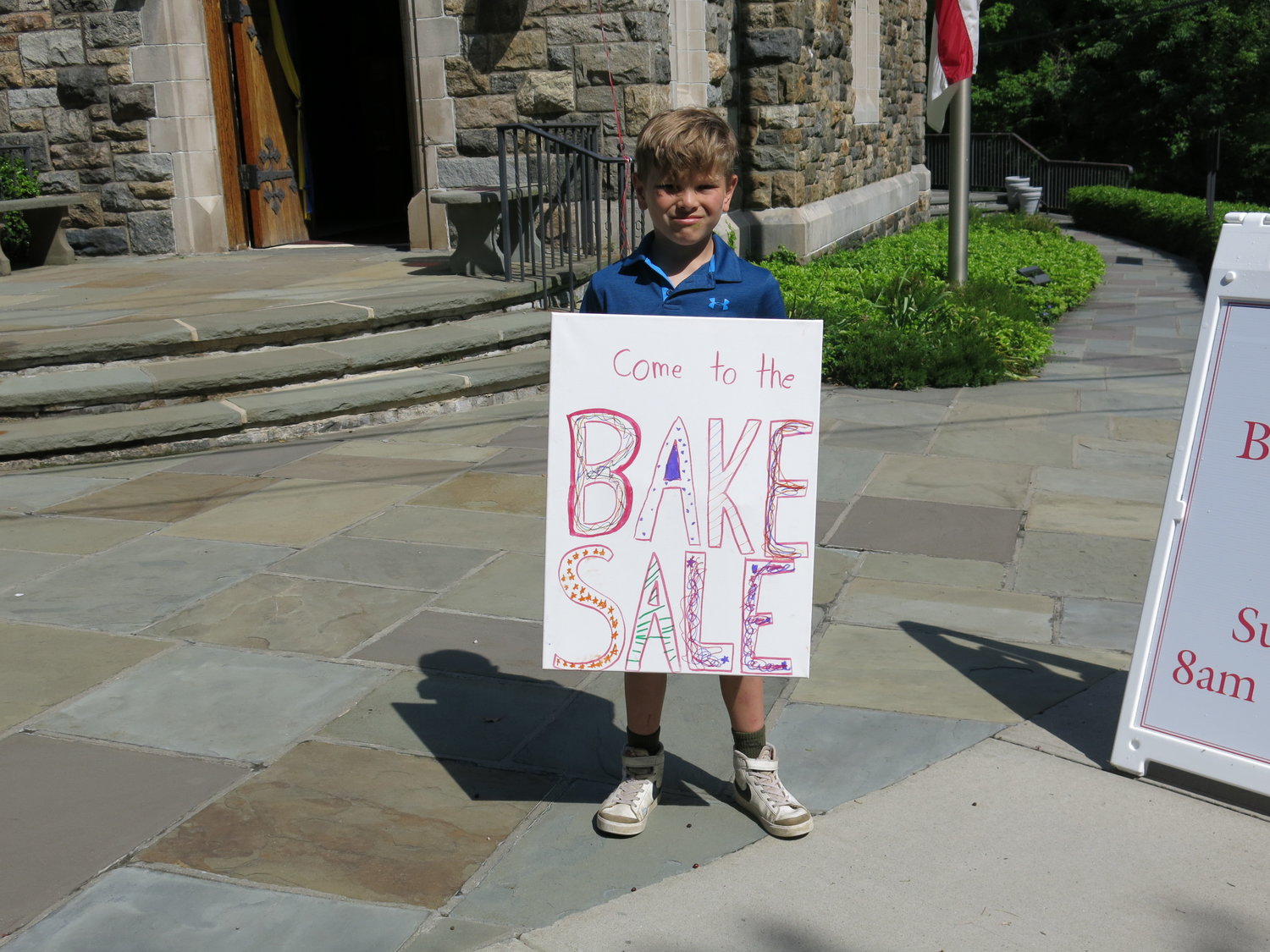 Brooks Fox, 7, encouraged motorists to stop by for the bake sale at St. John’s.
Laura Lane/Herald
Previous Next
By Laura Lane

It was a little over a week, after 10 Black workers and shoppers in a Buffalo supermarket were murdered by a gunman, that 13 children made their confirmation at St. John’s of Lattingtown Episcopal Church. Lawrence Provenzano, the bishop for the Episcopal Dioceses of Long Island, spoke to the children of the shooting. He said it wasn’t enough to just be a Christian and say, I believe. “Believing is action,” he instructed.
Then he challenged them, saying that as the next generation of Christians they have to make a change. “He said, ‘Our generation can’t figure this out. You have to,’” said Julie Zarou, whose twins, Davis and Taylor, made their confirmation that day.
No one could have foreseen what took place two days later — the massacre of 21 people, including 19 children, at Robb Elementary School in Texas. The tragedy, as horrific as it was, gave the newly confirmed children an impetus to act on the bishop’s message.
“It was almost like the bishop was channeling God’s message to these kids,” Zarou said. “Like God was saying you have serious work to do.”
The children had been given a challenge. “Uvalde came in like a freight train after Buffalo,” said Courtney Callahan, St. John’s director of children’s ministry and outreach. “The children needed to find a way to respond to what is evil. And we had to shepherd them.”


On Tuesday afternoon, Zarou and Callahan sent their rector, Father Mark Fitzhugh a note. Why not have the newly confirmed children raise funds for the Uvalde community by holding a bake sale outside the church before Sunday’s mass, they wrote.
Fitzhugh agreed that it would be a good idea. Then he called St. Philip’s Episcopal Church in Uvalde, which is a mile and a half away from Robb Elementary, to say that St. John’s would be helping. The church has a school for kindergarten through fourth grade, leading Fitzhugh to believe that it was more than likely the members of St. Philip’s knew some of the fourth graders who died and their families. Uvalde is a small town.
“I began immediately to think of how religious leaders have to shepherd communities through trauma,” said Fitzhugh, adding that he left a message for the rector, Father Mike Marsh that he was praying for them all.
When he called back on Friday Marsh picked up. “I asked what we could pray for specifically as he supported the community,” said Fitzhugh. The was silence on the line for a good few minutes. Then Marsh spoke, his voice breaking. “He told me it was so overwhelming to put into words where to begin to pray. Then he said the crime had reopened a wound in him because his son had died at an early age. He knows what it’s like to lose a child.”
Marsh’s son, Brandon was in his 20’s when he died in a work-related accident. “Father Marsh asked for us to pray for Brandon and for them all,” said Fitzhugh.
He told Marsh his church was holding a bake sale on Sunday to help the Uvalde community. The proceeds and other donations would be sent to Marsh for disbursement. “He was touched,” Fitzhugh said. “He said when the noise quiets down and the media goes home that’s when they will need the most help. To me, this is bringing what the bishop said full circle.”
The children of St. John’s spent the days before the bake sale preparing, by baking, making posters, and cutting out red and pink paper hearts.
On Sunday, the Fox brothers, James, 11, Tyler, 9, and Brooks, 7, took turns holding a large sign announcing the bake sale, in the hope that drivers would pull over and buy what was for sale.
James said he knew all about what had happened in Texas. “It was bad and sad,” he said. “I think they need to have better security. I know that I go to a safe school at Locust Valley Intermediate.”
His cousin, Gemma Fox, 14, who had been confirmed a week before, had a shopping bag filled with cookies, brownies and Rice Crispy Treats that she had baked. “It was very sad,” she said. “And it shouldn’t happen in our country.”
Twenty-one red paper hearts bearing the names of the victims were affixed to the Canterbury Gate.
At the craft table there was a box covered in glitter. Children created “prayer pockets” made of pink-paper hearts which they decorated. In the center, they placed a small rolled up piece of paper containing a prayer and then folded the heart. By midmorning, there were over 100 prayer pockets in the glitter-covered box.
“The prayer pockets are for the people in the community,” Callahan explained. “They will be sent to St. Philip’s. Maybe their fourth graders will need them because God knows how many kids they knew at Robb.”
Zarou said on Tuesdays the children do lockdown drills at the Locust Valley School District. “They are not immune to what happened. It’s personal to them.” she said. “Children died in school.”
The bake sale is a happy way to memorialize the children, to remember the victims, Zarou explained. “The bishop has charged our children with putting their love of God and Jesus into action,” she said. “They are doing that.”
Children have asked if St. John’s will be hosting a mission trip to Uvalde. They say they want to go, Callahan said. “We do hope to go there eventually to support the community with whatever they need,” she said. “Even if it’s just to hold their hands.”
The bake sale and donations, garnered $5,500 and Fitzhugh added $500 from the church. The funds and the prayer pockets will be mailed to St. Phillip’s soon. But St. John’s of Lattingtown is continuing its donation drive. To contribute, go to stjlat.org and click on make a donation and then on Uvalde, Texas.
Report an inappropriate comment