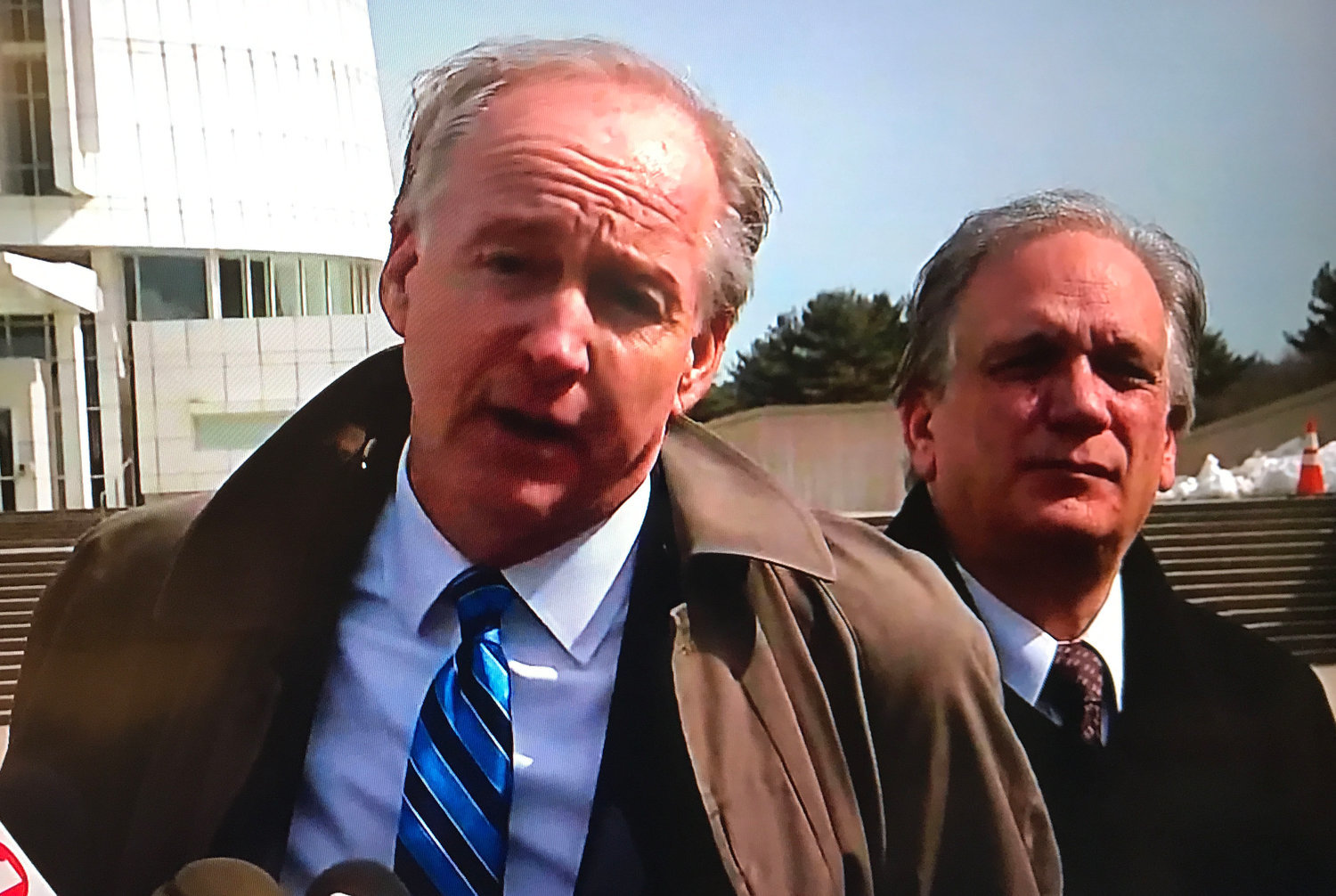 Former Nassau County Executive Ed Mangano, right. was sentenced to 12 years on April 14 for accepting bribes. His wife, Linda, was sentenced to 15 months for lying to the FBI. At left lawyer Kevin Keating with Mangano in 2019.
Herald file photo
By James Bernstein

Former Nassau County Executive Edward Mangano was sentenced Thursday to 12 years in prison after his 2019 conviction on charges he and his wife accepted bribes from an Oyster Bay contractor.

U.S. District Court Judge Joan Azrack in federal court in Central Islip handed down the sentence. Azrack described Mangano’s crimes being motivated by greed. She added that Mangano, 60, showed no remorse for his actions.

Linda Mangano, 59, received 15 months in prison for lying to the FBI.

The case rocked the political establishment in Nassau County, where Mangano for years had been a highly respected lawyer and political figure.

As reported by multiple media outlets, Mangano begged for leniency. He said that his life was destroyed and claimed he was in substantial debt.

Mangano said previously, "I feel like I'm just taking the fall for these guys' years of criminal acts."

Prosecutors had asked the judge to sentence Edward Mangano to 17 and 1/2 years in prison, saying in the past he “sold the power and influence of his office” shortly after his 2010 election as Nassau’s top government official.

Azrack said the former county executive's sentencing guidelines range under his conviction should be calculated at 30 years to life in prison.

In 2019, a found Mangano Town of Oyster Bay officials into indirectly backing what amounted to $20 million in loans for restaurateur Harendra Singh, a town concessionaire, after an outside lawyer for the municipality called such a transaction “a complete sham.”

Prosecutors presented evidence that Singh bribed Mangano with a $454,000 “no-show” job for his wife, free meals and vacations, two luxury chairs, hardwood flooring for the master bedroom in the couple’s Bethpage home and a $7,300 wristwatch for one of their sons.

Jurors also convicted Linda Mangano of conspiracy to obstruct justice, obstruction of justice and of two counts of lying to the FBI about her employment with Singh.

Harry Wilson dedicated to looking out for the ‘little guy’