Marie Colvin Way a reminder of a hometown girl’s sacrifice 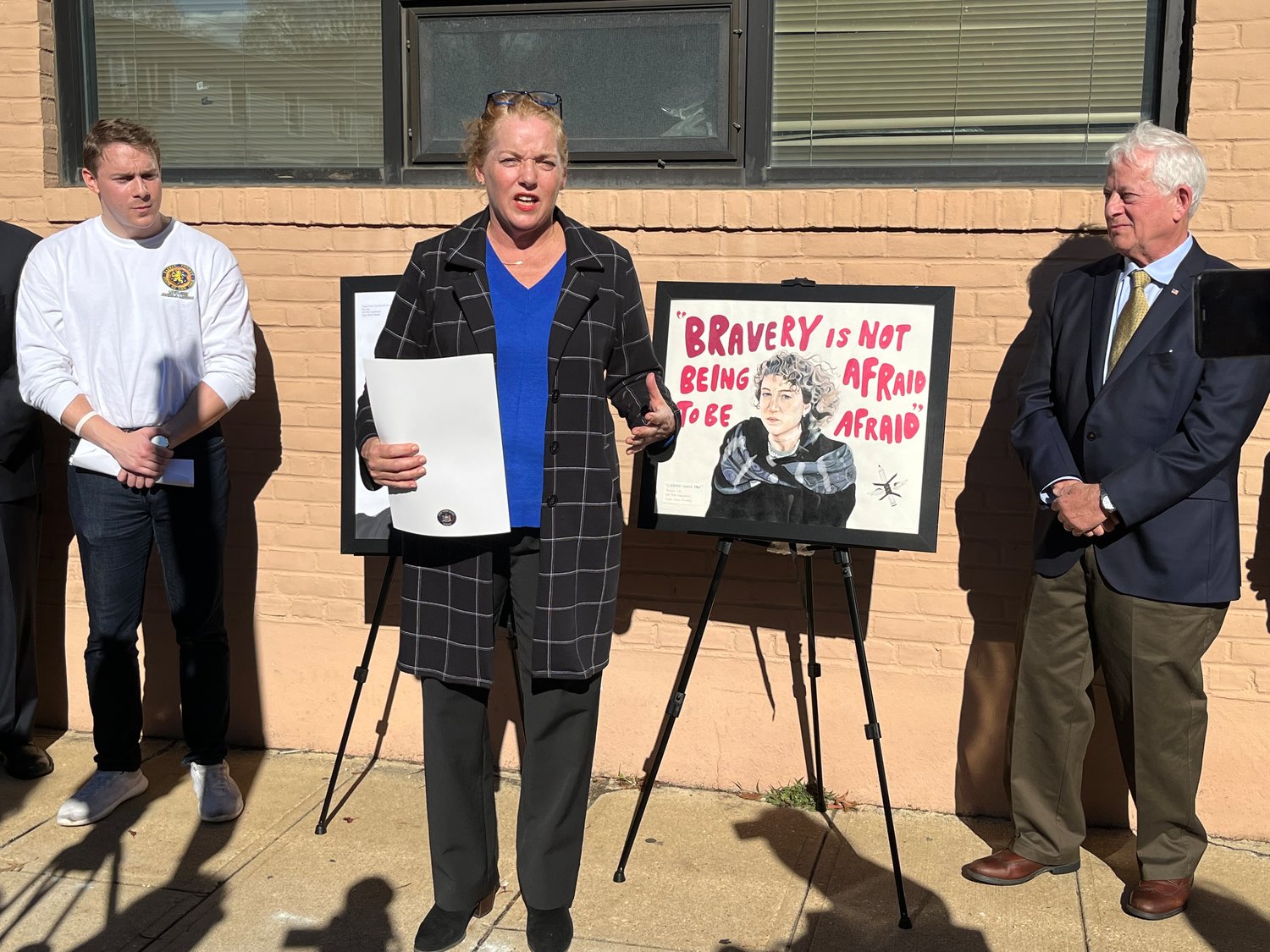 Colvin was a blazing light, persevering in the name of truth and humanity.”
Sabrina Guo, high school student, Oyster Bay
By Laura Lane and Will Sheeline

Legendary war correspondent Marie Colvin is a heroine in her hometown of East Norwich, as she is nationwide. When she was killed on Feb. 22, 2012, in Homs, Syria, Colvin, 56, was on assignment for the British national newspaper the Sunday Times. She was there to tell the story of Syrian civilians trapped in the war-torn city, which the Syrian Army had been bombing for five years.

Sabrina Guo, 17, who lives in Oyster Bay and is a Syosset High School senior, thought it fitting that a street be named after Colvin in her hometown to honor her legacy. Guo approached Nassau County Legislator Josh Lafazan in February with the idea, and he sponsored a bill that the Legislature passed unanimously in September.

It was a sunny day last Saturday as Colvin’s family members and friends, elected leaders and Oyster Bay residents gathered to name the intersection of Spring and West Main streets Marie Colvin Way. The crowd of more than 50 spilled into the street, there to honor the journalist who spent her career, and lost her life, exposing war crimes and humanitarian crises around the world.
“I am just so incredibly appreciative to have all of you come out here today,” her sister, attorney Cat Colvin, said. “Marie was always incredibly passionate in her work, so talented and brilliant.”

Guo said she respected Colvin’s bravery and compassion as she exposed war crimes and humanitarian atrocities when global attention was lacking. “Colvin was a blazing light, persevering in the name of truth and humanity,” Guo said. “Colvin kept burning until she ultimately lost her life in the line of duty. She was a stalwart pillar and a female role model, and I am proud to be a part of honoring her legacy here today.”

Lafazan, describing Colvin as “one of us,” said she was one of the best in the community. Her work, which spanned over three decades, saved the lives of tens of thousands of people, Lafazan said, especially those of women and children.

Colvin has received accolades in the past, including the Courage in Journalism Award and the British Press Award, and in 2000 she was named Foreign Press International Journalist of the Year. She was considered one the greatest war correspondents of her generation, and Lafazan said she continues to inspire people today, a decade after her death.

“She remains an incredible role model for our community, and especially for young girls,” he said, “and teaching our youth that their voices can and must be lifted to pursue freedom and justice for all.”

Colvin was known for her tenacity. She had been targeted while on assignment in Sri Lanka in April 2001, when government troops were fighting Tamil Tiger guerillas. A grenade was fired at her when she yelled, “Journalist!” She survived, but lost the sight in her left eye, and from then on wore a patch, which became her hallmark.

“We have journalists here, present and past journalists, myself being one of them,” Oyster Bay Town Supervisor Joseph Saladino said, “and it’s a tremendous responsibility to bring forth the truth. Not always easy, but a tremendous and important role.”

Then he turned to Cat Colvin, and said he attributed Marie’s ability to separate truth from lies to her upbringing. “Your sister knew so well that lies are the weapons of tyrants, and she stood up against those tyrants,” Lavine said, “and she was a hero, and she did save people’s lives.”

A documentary called “Under the Wire,” which focused on the last three weeks of Colvin’s life, was released in 2018, five years after the publication of a book, “Under the Wire: Marie Colvin’s Final Assignment,” by photographer Paul Conroy. He had accompanied Colvin in Syria, and was seriously injured when she was killed. The library at her alma mater, Oyster Bay High School, is named after Colvin as well.

In an interview with the Herald in 2018, her sister described her as “uncompromising,” regardless of how small or large the issue. “Everything was an adventure with Marie,” Cat said.
Her sister’s main objective was to uncover the truth. “(Conroy and Marie) thought that if they could do their jobs better — if Paul could capture the pain of the suffering that he saw firsthand, and if Marie could just write better, people would see how unacceptable it was,” Cat said. “And they thought that if they could bring it more graphically to the world, it wouldn’t continue.”