Oyster Festival returns in person after two years to the hamlet 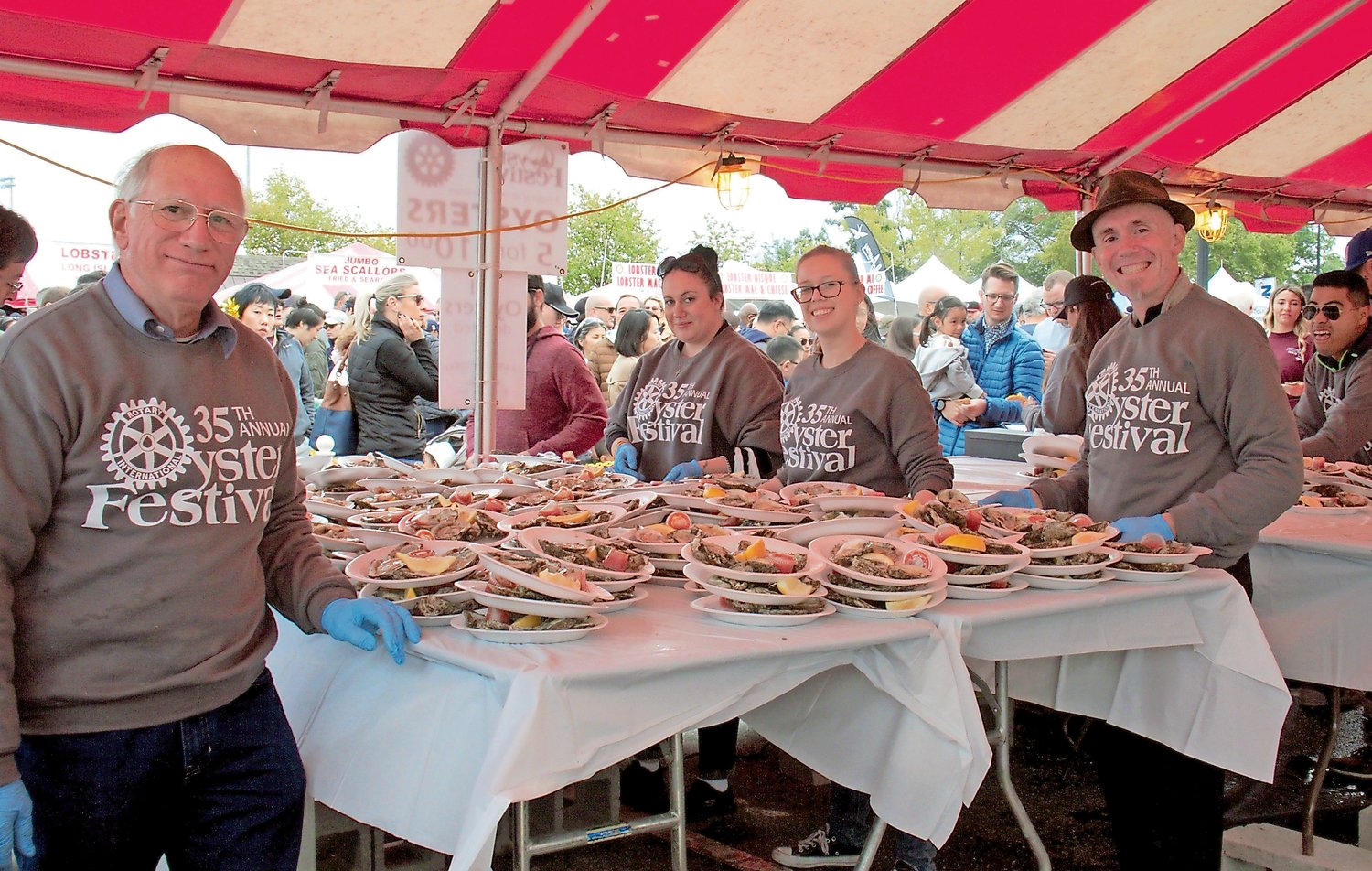 Plates of oyster were prepared and stacked in 2018, ready to sell to Oyster Bay festival goers. Oysters and clams will be plentiful at this year's Oyster Festival too.
Elisa Dragotto/Herald
By Laura Lane

The Oyster Festival is coming back to the hamlet after two long years, on Oct. 15 and 16 in Theodore Roosevelt Memorial Park in Oyster Bay. The coronavirus pandemic put a crimp in the popular festival’s style the last couple of years, forcing a “virtual” festival in 2020, which wasn’t unsuccessful, and a cancellation last fall.

This festival will be much like its pre-coronavirus versions, but there will be some welcome changes, too. In the past, businesses and restaurants in town had to pay “charging fees” to offer their specialties on tables outside their establishments. This year, Kerry Gillick Goldberg, the event organizer, said, that won’t be required.

“So much has changed in the hamlet, with new restaurants and a bookstore — all these great things,” Gillick said. “We want visitors who come to the Oyster Fest to experience Oyster Bay and see all the newness that’s going on.”

The festival will once again be sponsored by the Rotary Club, through its Oyster Bay Charitable Fund. Rotarian Bev Zembko, the club’s liaison, is helping to coordinate the event, which traditionally attracts roughly 200,000 people.

“We’re trying to get as many community groups involved as we can,” Zembko said. “I want to capitalize on what we have in Oyster Bay at the festival — our local resources.”

Nonprofits and area businesses depend on the event. Ravin Chetram, vice president of the Oyster Bay-East Norwich Chamber of Commerce, said he was looking forward to the festival returning to its roots.

“It was too spread out before, and right before Covid it got too big,” Chetram said. “One year they had a drinking tent that took away from town businesses. This year, anything that affects a business in town, like what’s being sold at a food truck, will be kept away from where the local place is. The festival will be like it used to be.”

The beer and wine tent will return to the park, but alcohol will only be available for purchase by those 21 and older. The same is true for businesses that normally sell alcohol on Audrey Avenue.

The chamber is scheduled to meet with organizers in the next week to ensure that the festival benefits local businesses. “It’s a lot of work,” Chetram said, “but it helps all of our nonprofit organizations and businesses.”

Festival-goers will enjoy much of what they’ve become accustomed to this year. There will be amusement-park rides provided by Newton Shows at Firemen’s Field, the Kings of the Coast will present their popular pirate show, and a tall ship will be docked for visitors to climb aboard.

Some organizations have already signed on to sell their offerings at the food court, including the North Oyster Bay Baymen’s Association, which will bring fresh clams and mussels, and the Mill River Rod & Gun Club, which will offer fried oysters.

Zembko, who has overseen the food court for 20 years, said that the loss of three of the main event coordinators has left her in charge. Former Rotary president Jim Fuccio died of a Covid-related illness in 2020. Len Rothberg, who oversaw sponsorship sales, also died that year, of lung cancer; and Mel Warren, the arts and crafts organizer, died of a stroke in 2021.

“We lost so many people prior and during Covid, and will do something to honor them,” Goldberg said. “Fortunately, people who have participated will step in. We have a long-term vendor who will step in to run the arts and crafts.”

There will be one stage instead of two for musical performances and oyster shucking and eating contests. And there will be a platform near West End Avenue for the children’s performers.

Work continues to make sure the event runs smoothly.

“I love the fall, and the Oyster Festival is such a wonderful event,” Zembko said.

“People are there having a great time. And the nonprofits work so hard for their organizations. The Oyster Festival helps so many of these groups.”

Catholic Health has signed on as the title sponsor of this year’s festival.