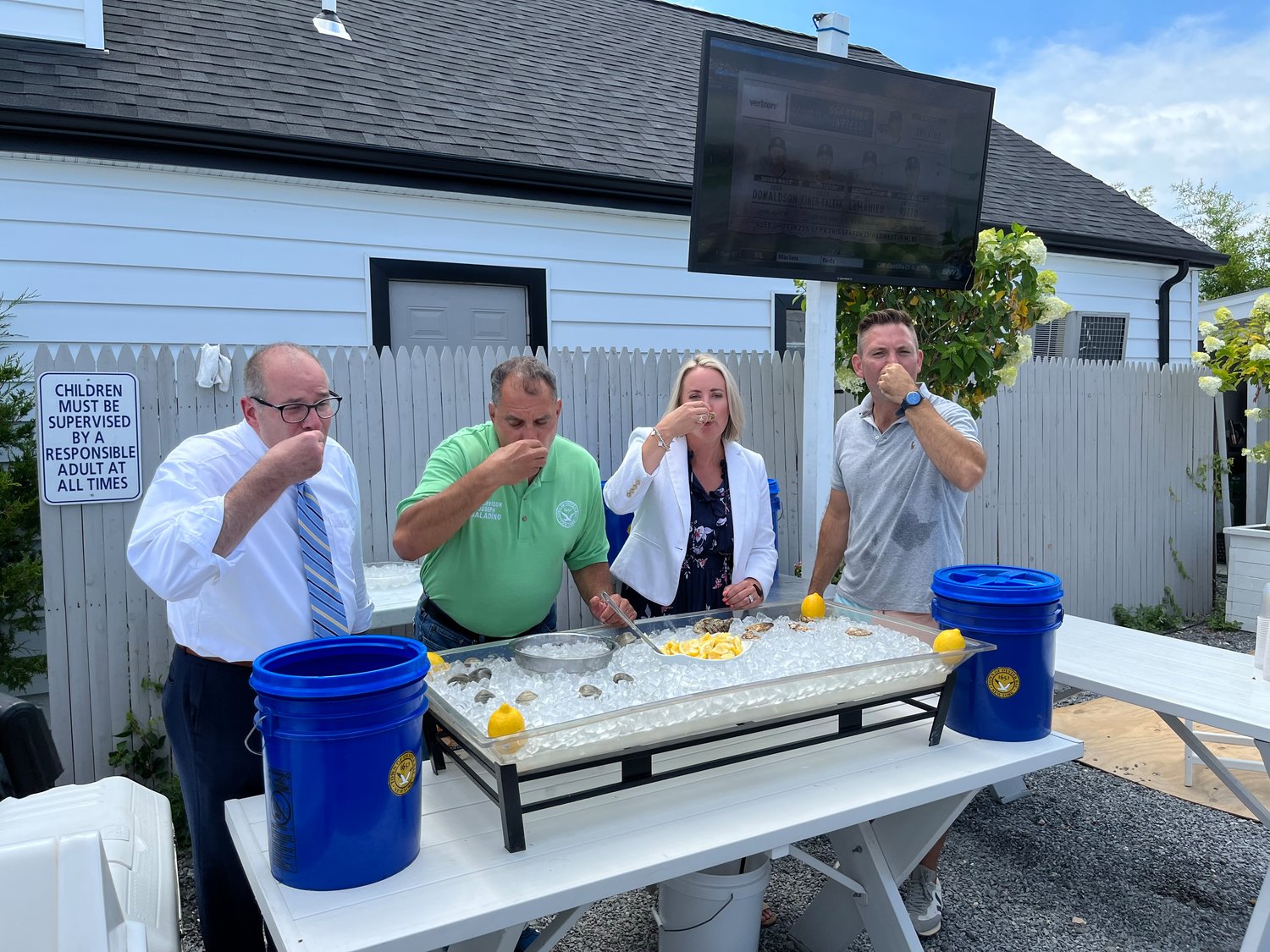 The concept is pretty simple: When you shuck it, don’t chuck it, but throw it in the bucket.”
Joseph Saladino, Town of Oyster Bay supervisor
By Will Sheeline

Shellfish, particularly oysters, have become well known for their positive impact on the environment — particularly for their ability to filter harmful chemicals like nitrogen from the waters of the Long Island Sound. Now, thanks to a new initiative the Town of Oyster Bay is implementing, even oysters that have been eaten will benefit local waterways and harbors, by way of their shells.
The new project, announced on July 27 at Cooper Bluff restaurant in the hamlet, is called the Shell Recycling Partner Program. Town officials, including Supervisor Joseph Saladino, Councilwoman Laura Maier and Clerk Rich LaMarca, were on hand to announce the initiative and share its details with residents tuning in on TV.
“Through this innovative program … the town partners with local restaurants, and any other interested parties, to collect their oyster shells and clam shells,” Saladino explained. “The concept is pretty simple: When you shuck it, don’t chuck it, but throw it in the bucket.”
The “buckets” are Food and Drug Administration-compliant airtight buckets, which restaurants partnering in the program will fill with discarded oyster and clam shells. The town will collect and store the shells at the Bethpage landfill facility. After a one-year “curing” process, the shells will be returned to the bay, where they will help restore the local shellfish population and ecosystem.
The project was initially presented to the town by the local environmental organization Friends of the Bay. The group introduced the idea to the Department of Environmental Resources in 2019. Heather Johnson, executive director of Friends of the Bay, explained that the organization heard about a similar program that another Long Island environmental group, Seatuck, had begun in 2018.


According to Johnson, Friends members knew they wouldn’t be able to organize a project of this scale on their own, so they brought the idea to the town.
“With this kind of program, if you’re going to do it, then you have to do it right,” Johnson said. “Just collecting the shells from the restaurants is time-consuming, and then somebody’s got to be willing to put stinky oyster shells in their car, so that’s really where the town came in, and they were interested from the beginning.”
The project will help the environment by enabling shellfish larvae, known as spat, to grow on the old oyster and clam shells, as they do naturally when these shellfish die in the wild. It will also improve the ecosystem by spurring the growth of oyster “reefs,” which provide a natural habitat for numerous species of aquatic wildlife.
So far, five restaurants have agreed to partner with the town: Cooper Bluff, Café Al Dente, Rothmann’s Steakhouse, Fox Hollow, and Teddy’s Bully Bar.
The program organized by Seatuck, known as the Half Shells for Habitat Oyster Recovery Program, is a Long Island-wide initiative to recover oyster shells from restaurants for use in shellfish and habitat restoration efforts. Maureen Dunn, Seatuck’s water quality scientist and the director of the program, explained that her group is already working with several communities, including Hempstead, Islip and Brookhaven, and is looking to work with Oyster Bay, Huntington, Southampton and other towns.
Dunn noted how important this type of recycling program is to restoring ecological balance to Long Island’s harbors and bays, both on the Sound and the Atlantic Ocean. According to Dunn, oysters and clams are an essential part of the local waterways, and have been decimated over the years by commercial farming and pollution. This, in turn, has had a negative impact on water quality and marine habitats in the region, which programs like these seek to counter.
“Most of the benefits of an oyster shell recycling program have to do with improving water quality,” Dunn said. “But there is also habitat and shoreline stabilization, particularly on the South Shore, where erosion is really affecting the beaches.”
Since its program began in 2018, Seatuck has collected and recycled over 100,000 pounds of oyster shells.
Report an inappropriate comment