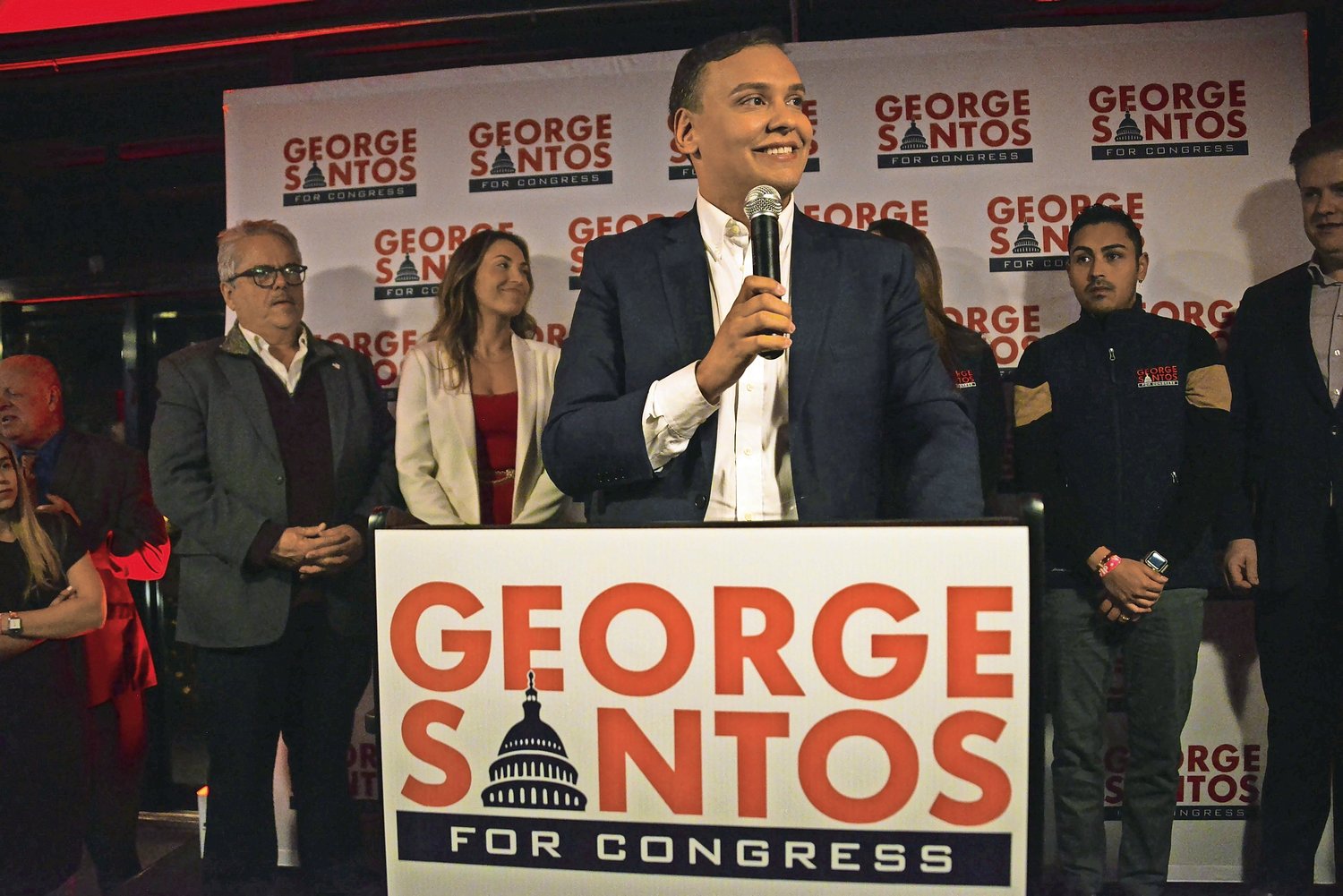 Some Republicans say revelations about George Santos, who is now officially the congressman for District 3 in the House of Representatives, will harm their party locally.
Herald file

And this will serve to harm the Republican Party locally as Trump has hurt the party nationally.”
Jeffrey Wiesenfeld, Great Neck
By Laura Lane

Jeffrey Wiesenfeld voted for Democratic incumbent Tom Suozzi when George Santos ran unsuccessfully against him in 2020 for the 3rd Congressional District seat, to which Santos was elected last year after Suozzi ran unsuccessfully for governor.

Wiesenfeld, a Republican, would vote for Democrat Robert Zimmerman in a special election if Santos’ seat were vacated, he said — adding that he hopes that happens soon.

Former U.S. Rep. John LeBoutillier did more than vote for Zimmerman. He publicly endorsed him a week before the November election. Dennis Saffran left that part of his ballot blank. And Teodora Choolfaian, who did vote for Santos, said she would never do so again.

These longtime loyal Republicans feel betrayed by Santos, who they said is a liar and not the man they want representing the 3rd District, their home. All said they want him to resign now.

Santos has been under fire since a New York Times report that much of his resume and other claims — education history, employment history, philanthropic activity — doesn’t check out.

Old Westbury resident LeBoutillier, a Glen Cove native who served in the House of Representatives from 1981 until 1983, said Santos should have been vetted by the Nassau County Republican Party. Someone needs to be held accountable for him being included on the ballot, LeBoutillier said.

“In the old days this would have never happened, for Nassau who had 80 percent of the district to defer to Queens with 20 percent,” he said. “We should have vetted him the first time he ran."

But in December, Mike Deary, spokesman for the Republican Committee for Nassau County, said Santos didn’t present any red flags, so there was no review of his resume. And because he had already run in 2020 against Suozzi and was from Queens, it was up to the Republican Party from that borough to vet him.

Santos, aside from his “creative” resume, does not represent the types of people who live in District 3, LeBoutillier said. “And that white-power salute on the House floor and the fact that he’s a Steve Bannon acolyte — for those reasons alone he should be removed,” he said. District 3 is not a white nationalist Republican district. LeBoutillier said: "It's made up of mostly highly educated, successful, affluent people. Not racists. To have a white power nut-bag represent this district is outrageous. He has to be removed because he can’t be effective and I hope it will be weeks, not months.”

Saffran, who lives in Douglaston, said he was suspicious of Santos from the beginning, and worried the extent of his fakery might be more than he could imagine.

“He was an indictment waiting to happen,” Saffran said. “Santos was at Jan. 6 (insurrection at the U.S. Capitol) and is an extreme MAGA radical. I was the vice president of the Whitestone Republican Club but left on Jan. 6. I haven’t been involved since then.”

Santos came to the club’s meetings sharing his story, painting himself as someone who went from rags to riches. Saffran said he felt ashamed and worried that he had become an elitist snob because he didn’t think much of Santos, until he reflected further.

“He was talking about his Wall Street background, and I remember thinking he had credentials. Maybe I’d been wrong about him,” Saffran recalled. “But then I thought, his story, it doesn’t add up.”

Wiesenfeld has been in the political realm for over 20 years, switching parties along the way. When he was a Democrat, Wiesenfeld worked as former New York City Mayor Ed Koch’s senior campaign aide and then, once Koch was elected, as chief of staff for the New York City Department of Transportation. Wiesenfeld became a Republican in 1990 and worked as the regional director for the boroughs' Empire State Development Corporation under Gov. George Pataki.

“I’ve had a long government career and seen a lot,” said Wiesenfeld, who lives in Great Neck. “I found it strange two years ago when there was no background history check run on Santos, but I paid him no mind because at that time no Republican would win anyhow and Tom (Suozzi) was the best you would get.”

As far as Wiesenfeld is concerned, nothing Santos says is true. Referring to him as the “biggest fraud in the country,” Wiesenfeld said the new congressman represents a complete and utter disenfranchisement for the people living in District 3.

“And this will serve to harm the Republican Party locally as Trump has hurt the party nationally,” said Wiesenfeld, adding that if a moderate Democrat ran in a special election that would be preferable to Santos remaining: “Who will partner with this mental case on legislation? And who would want their kid to work for this bum as an intern and have his name on their resume?”

For Choolfaian, the revelations about Santos are personal. A conservative activist living in Port Washington, she has led a group that protested Gov. Kathy Hochul’s mandate that children study under Covid-19 mandates, including the vaccine requirement. Choolfaian invited all local leaders to a Greenvale rally held on Jan. 31, 2022. Only Santos responded.

“He brought a megaphone and stood right next to me chanting, ‘My child, my choice,’” Choolfaian said. “I saw him at a Republican committee meeting and I shook his hand. I said, ‘I’m so proud of you.’ I was not aware of anything then and support candidates who support me.”

She campaigned for Santos, going door to door. A mom and PTA member, she’d tell her neighbors in Port Washington why she liked Santos. She said many of her Democratic friends and fellow parents voted for him.

“When I first heard, I was in complete shock,” she said. “I refused to believe the New York Times article. I thought they were trying to smear and slander him.”

She asked a Santos volunteer if the accusations were true, and he sent her links of the media coverage. When she learned the articles were accurate, she decided she no longer wanted anything to do with Santos.

Invited to Santos’ swearing in and reception in Washington, Choolfaian instead went to the Capitol building and left a note with a campaign manager. “It said, I’m asking you to resign immediately,” she said. “I’m prepared to do what I did for Santos in a new election. He'll do nothing for our district. No one is even talking to him.”

Saffran said it isn’t worth having a five-seat majority in the House if Santos is among those representatives.

“Since he voted for Kevin McCarthy for speaker, his usefulness has ended,” Saffran said. “He only exists as an embarrassment. I don’t want him as my congressman.”