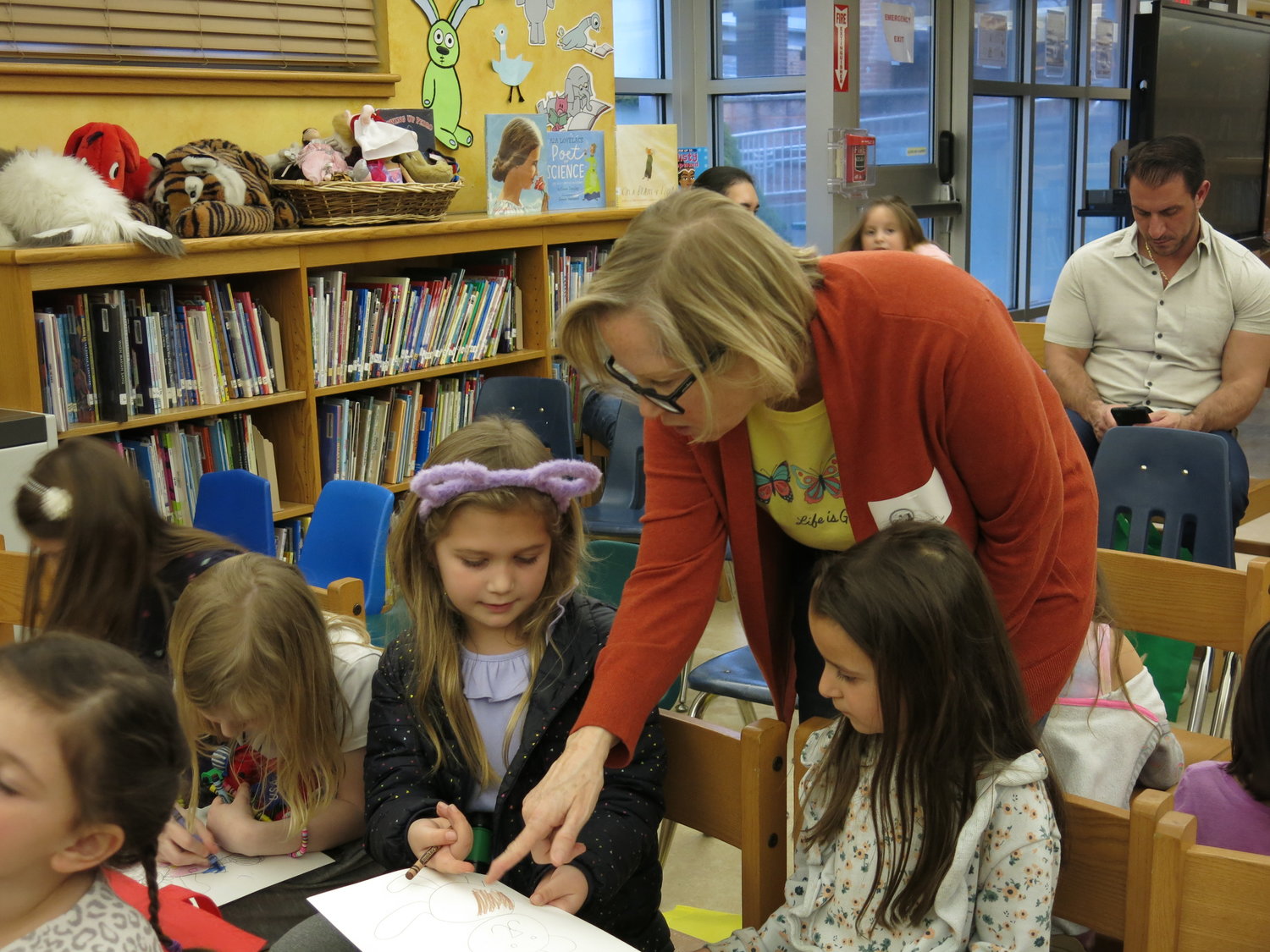 Author and illustrator Kathleen Bart gave Roosevelt Elementary first-grader Kylie Joannon, left, a suggestion on how to draw a teddy bear, which Savanna Silvio listened to as well.
Laura Lane/Herald 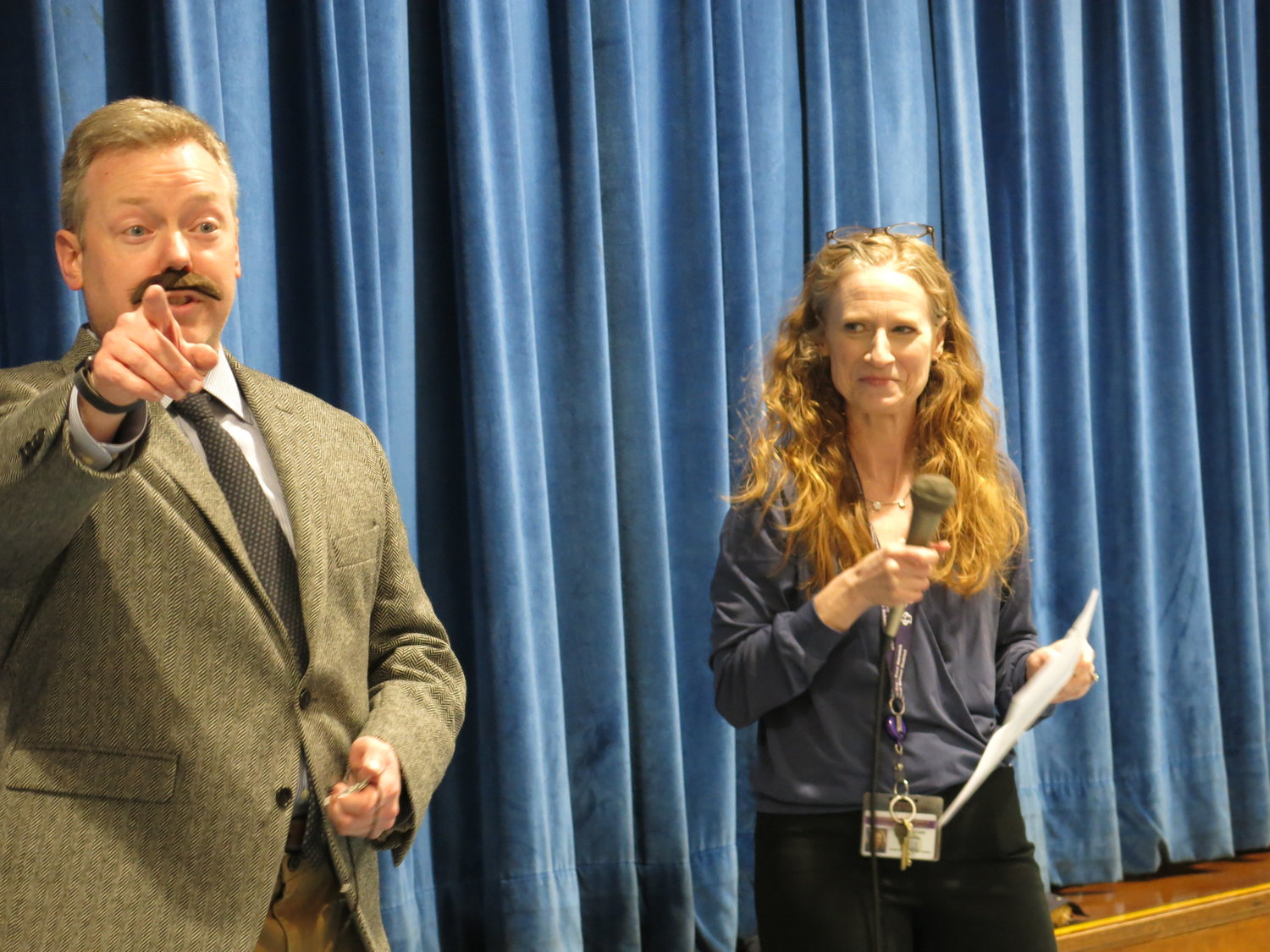 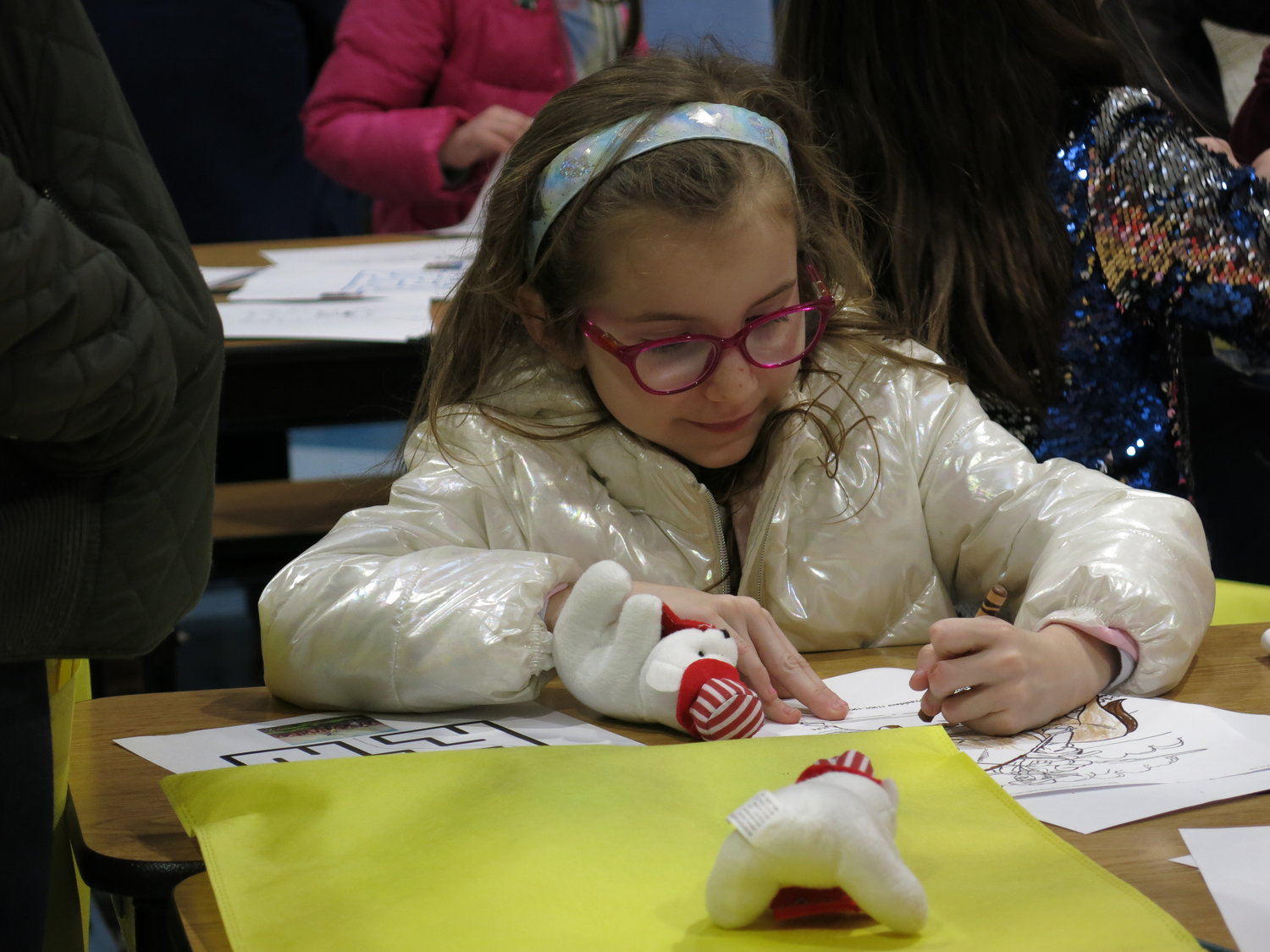 Asked what she knew about Roosevelt, Kaitlyn Dunne said that the former president saved a baby bear.
Laura Lane/Herald 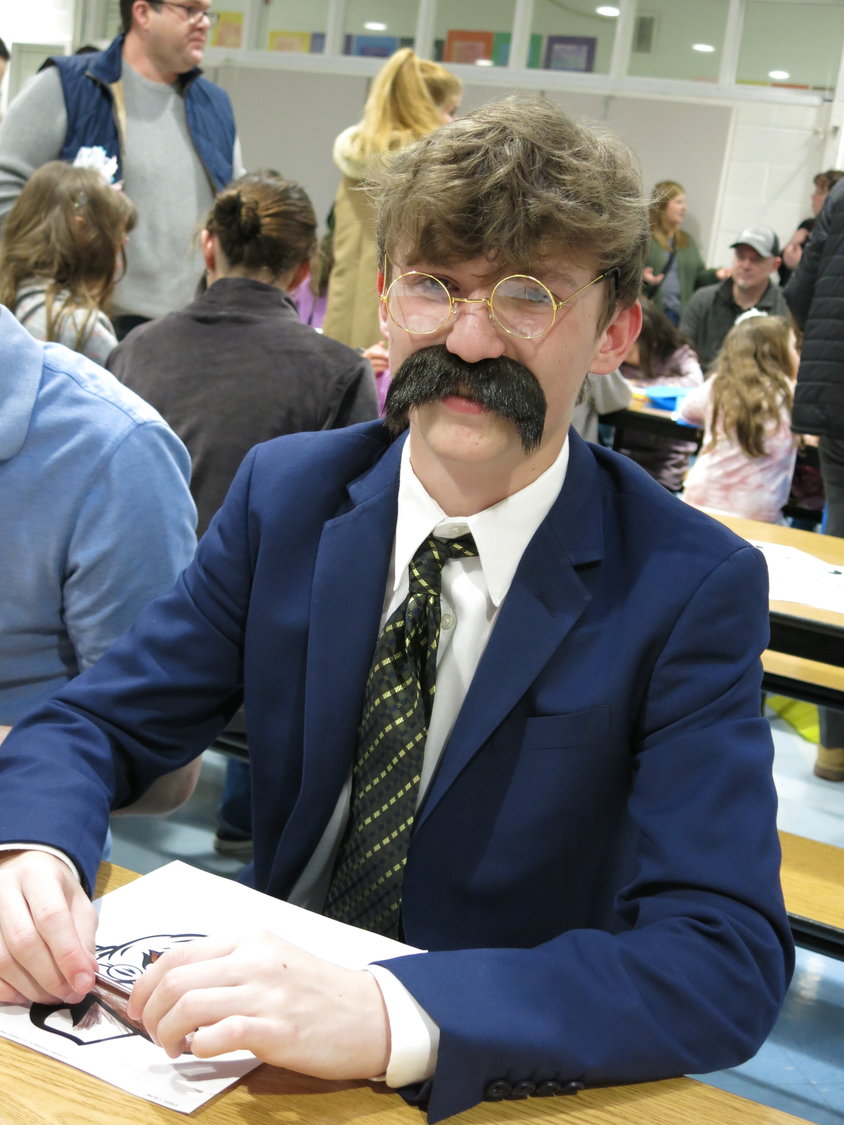 Patrick Walsh, 18, a member of the Rho Kappa Social Studies Honor Society, spoke to first-graders about Roosevelt as he joined in coloring a drawing of him.
Laura Lane/Herald 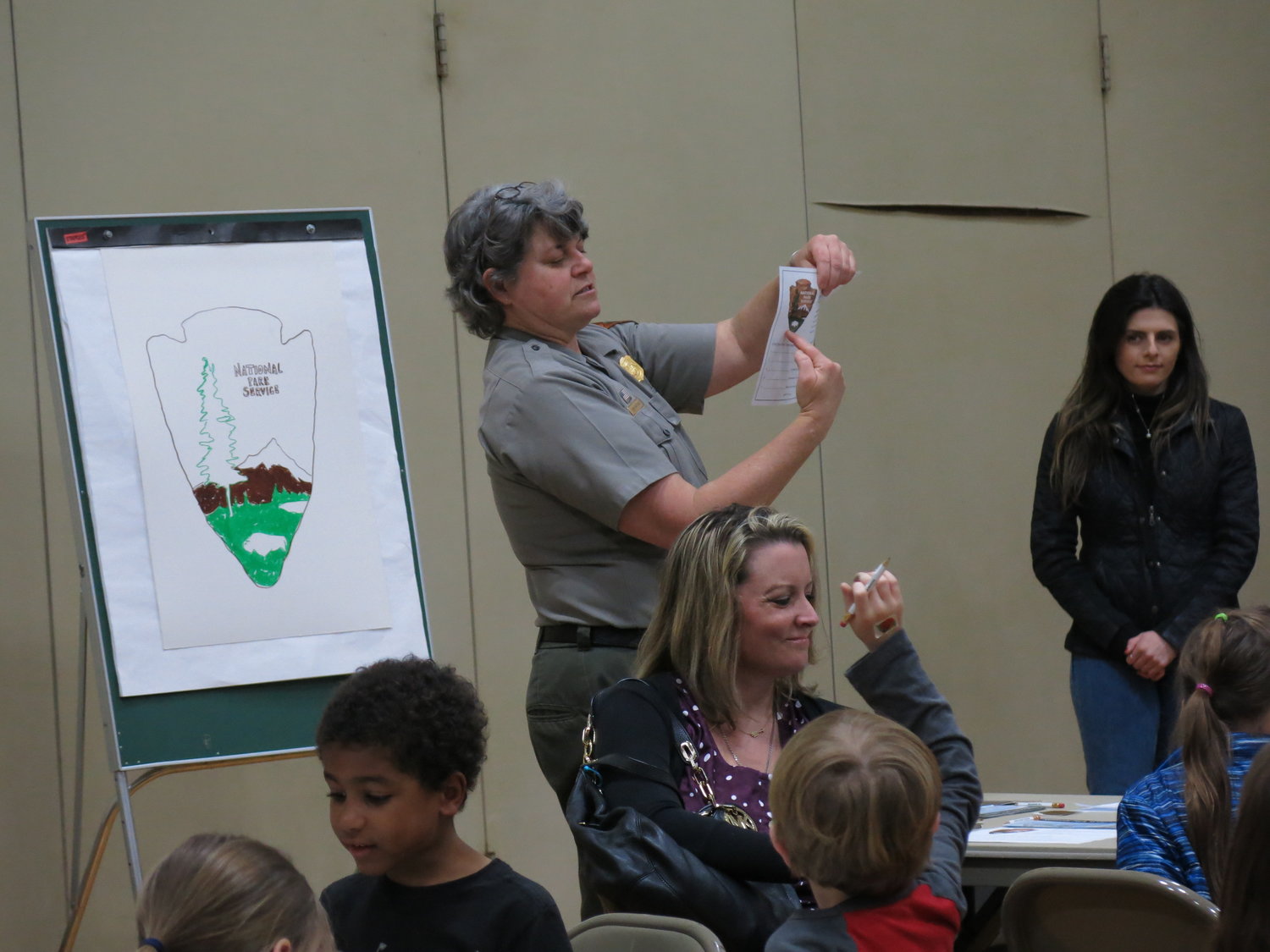 Erin Whittaker, from Sagamore Hill, spoke of the meaning of the national park logo.
Laura Lane/Herald 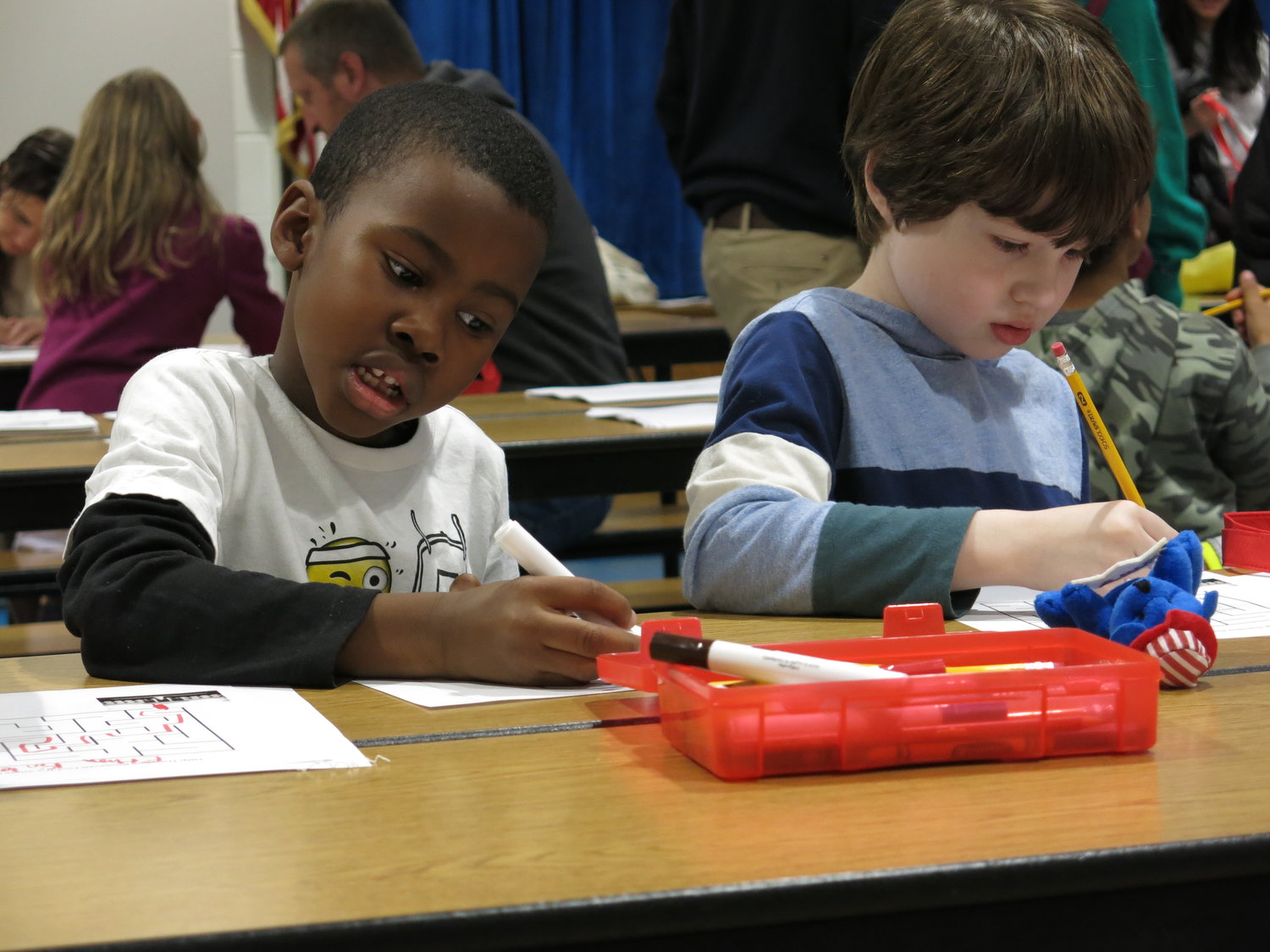 Braxton Thornton, left, did his best to solve a maze, while Ethan Finley colored a drawing of Roosevelt at Social Studies Night.
Laura Lane/Herald
Previous Next
By Laura Lane

Parents were excited, too, chatting among themselves while keeping an eye on their children. The evening of March 31 was the first time parents and children were able to attend an activity at the Oyster Bay elementary school in two years, since the coronavirus pandemic began.

The event was the brainchild of Roosevelt’s principal, Tami McElwee. There were already a science night for second-graders and a math night for kindergartners, at which parents were welcome, she reasoned. Why couldn’t the first-graders have some fun, too? And what better way for them to do so than to focus on the school’s namesake?

“Because we’re the Theodore Roosevelt School, we’ve had a longstanding relationship with local historians, Sagamore Hill and the Oyster Bay Historical Society,” McElwee explained. “It just made sense to focus the night on Theodore Roosevelt and connect students to the origin of their school name and the deep-rooted history in Oyster Bay.”

Dr. Ryan O’Hara, the assistant principal at Oyster Bay High School, appeared to be having a great time portraying Roosevelt, even though one of the accoutrements that defined the president — his round glasses — broke.

When he greeted the children in the main lobby, O’Hara asked them all sorts of questions, anything to make them laugh. They laughed even harder in the all-purpose room when he told them he was 164 years old.

“I’ve played a leprechaun, cowboy and band leader,” he said later. “It’s exciting to play one of our hometown heroes.”

And there was another Theodore Roosevelt in the room. Patrick Walsh, 18, a member of the Rho Kappa Social Studies Honor Society, sat with a group of children coloring in an image of the former president. “He was alive over 100 years ago, and I’m not sure they teach about him like they used to,” Walsh said, choosing a brown crayon to color Roosevelt’s hat. “They need to know why the school was named after T.R.”

He knew a great deal about Roosevelt, he added. “He almost stopped football from being played because he thought it was too dangerous,” Walsh said.

The honor society hosted activities for the children at the beginning of the evening. Its members, seniors at Oyster Bay High, searched for ways to engage the children so they would be curious about Roosevelt.

“Theodore Roosevelt was a big part of the community in Oyster Bay,” the society’s president, Joan Olivero, said. “We know about his life, and wanted to bring it to a lower level for a younger age.”

The children were divided into three groups, and went to different rooms with their parents to take part in activities that focused on Roosevelt’s life and legacy.

Erin Whittaker, the Sagamore Hill National Historic Site’s chief of interpretation, visitor services and natural resources, and Scott Gurney, a park ranger there, hosted a session in the gym on Roosevelt as a conservationist. They shared information on the meaning of the national park logo as well as Roosevelt’s connection to the national parks. And they spoke of Roosevelt’s Oyster Bay Cove home, which was known as the Summer White House when he was president.

“Who owns the National Park Service?” Whittaker asked. No one seemed to know. “You own it. And we, park rangers, take care of it.” This information, Gurney said, is important for children to understand. People tend to value places they own, and support keeping them viable.

Later, after drawing a picture of a national park, children received Junior Park Ranger badges and a map of the nation’s national parks.

Elsewhere in the gym, Regina D’Orio, a science teacher at the school, focused on the Theodore Roosevelt National Park in North Dakota. Children learned about his passion for nature and his work to conserve it throughout the U.S. — specifically grasslands — and planted grass seeds in small cups to take home.

Kathleen Bart, from East Norwich, the author and illustrator of “The Tale of Two Teddies,” had spent the week at the school, speaking to first-graders about the history of the teddy bear, what it’s like to be an author and Roosevelt. “She got them excited about the conflicting stories of how the teddy bear came to be, including his name,” McElwee said.

In the library on Social Studies Night, Bart taught first-graders how to draw a bear.

Her book, which she also illustrated, was published 20 years ago. “This is the first school I visited when I published my book,” she recalled. “I love this school. Everyone has a sense of community here. It’s great to celebrate local history.”